Back in 2017, Felicity Jones was preparing to star as Ruth Bader Ginsburg in the film On the Basis of Sex when she flew to Washington for some one-on-one time with the iconic Supreme Court justice, visiting her office and even the most intimate nook of her home.

“I remember her showing me her collection of gloves and collars in her wardrobe,” Jones says. “She was extraordinarily open with me in terms of sharing old photographs and very candid about her experiences, which was obviously very helpful in playing her.”

Jones, who became a first-time mother around the same time that Ginsburg passed away in September, now clings to the memory of their shared time together, keeping a picture of the legal trailblazer in her study.

With her latest film, The Midnight Sky, the British actress has pulled off something trailblazing herself — shooting the George Clooney-directed sci-fi film while pregnant. For decades in Hollywood, a baby bump typically meant getting bumped from a film. But Clooney not only insisted that the Oscar-nominated actress remain as the film’s marooned astronaut, Sully, he worked the pregnancy into the postapocalyptic script. Jones hopped on a Zoom call to discuss the film, which Netflix bows on Dec. 23, on shooting stunts while with child, fighting for pay parity and the future of Jyn Erso in the Star Wars universe.

How have you been riding out the lockdown?

I’m in London. Well, I had a baby, which was an interesting challenge early on in lockdown in the U.K., so that brought some added pressure. Now just spending a lot of time inside. There’s been a lot of watching Emily in Paris recently, which was good fun, reminded me of the Sex and the City days, and just catching up on movies that I haven’t seen for ages, watching [La Femme] Nikita, Luc Besson’s movie from a long time ago. So, in some ways, it’s been quite nice to watch some films that I haven’t seen for ages.

What was your most memorable moment with RBG?

Probably sitting and drinking coffee in her apartment because she’s a big coffee drinker, which I think helped her to get through those long hours looking at cases. So, just simply sitting with her on her sofa in her apartment and then traveling with her in her car. We went out to dinner later that night. I think it was how vulnerable she was with me and the trust that she had that will stay with me. She had been very involved in the process of making the film and had seen every draft and so had intimate knowledge, obviously, of what we were doing and so was a great supporter.

What was your personal takeaway with regards to her legacy?

I have her picture in my study to remind me of the way she approached things, the intelligence in which she approached difficult situations and that she found a way of bringing people together. She didn’t polarize people, and I think that’s what’s so important for people to remember now. She found a way through her articulacy of reducing conflict and making what she was saying just seem like common sense. I always think of that whenever I’m in situations that are complex or difficult. Then I come back to the rational way with which she approached things. And there must have been moments when she just wanted to fly off the handle and go insane and say, “This is ridiculous.” But the way she managed to cause such a persistent, but ultimately, conciliatory and amicable approach was remarkable. She played the long game, which I deeply admire.

What attracted you to this role of Sully in The Midnight Sky?

I immediately responded to the script when I read it. I was very moved by the themes in the film. The film is about trying to connect — someone on Earth trying to connect with a spaceship floating around in the ether. But also, it’s about what has meaning for us and what is important in our lives because in the film, the characters that we see have a lot of time on their hands, which is forcing them to reflect on what is important to them. Interestingly, that appealed before we’d been flung into this situation in these COVID times. And it appealed because I think it was very much about the modern moment that we find ourselves in with increased technology. What does it mean to really connect? What does it really value? And I feel like those questions have just been even more heightened through the pandemic, so the film has gotten more and more relevant throughout the year, which is pretty remarkable. It’s unbelievable. Life is definitely imitating art.

How was the Netflix experience? Is there a difference knowing that your performance will primarily be seen on small screens?

The way something is seen doesn’t affect the process of shooting it. I found that they were excellent in letting people get on with what they’re good at doing. I think that’s what’s so brilliant about working with them is they really trust the people they work with. And they make our jobs very easy. It’s in this pandemic that we find ourselves in, and, obviously, people are watching a lot more online. As an actor, it’s fantastic that people can still keep watching stories, and that’s the main thing really.

Was there any hesitation or resistance about continuing in the role after you got pregnant?

No. It was a pretty organic process. In many ways, my being pregnant intensified my connection to Sully and made it feel even more pressing to make a film about dealing with the end of the world. And George was adamant of wanting me to play the part, and so he was amazing in adapting some sequences. There were certain stunt sequences that he made a little alteration in order to make it as safe as possible for me. So I had the luxury of being able to be seated for many of my stunts, which was quite nice. When we started shooting, the plan was we would CGI the bump, and Sully wasn’t going to be pregnant. And then, when we started shooting, George was watching the rushes and came to me and said, “I think actually this could be even better for the narrative if Sully was pregnant.” And it felt right. There’s only a few cases where women have been able to be pregnant in a drama. So, it felt rather revolutionary and a testament to George that he was able to adapt in that way. That’s what makes this project so special. It is truly pioneering in that [my pregnancy] was always seen by George as an addition and not something to be afraid of.

Were there any particular stunts that proved to be more challenging because of the pregnancy?

No. It actually was all very fluid. We had a lot of prep time and a lot of rehearsal, and it was actually really exciting to be pregnant in a spacesuit. It was quite a cool experience that I will be able to tell my child about in the future. There’s a sequence in the ship toward the middle of the film where we’re outside of the ship and we move inside the ship, I don’t want to give too much away. But I was able to do that sitting on a seat on a crane, on an arm, which was a nice, comfortable, safe position to be in. There was another sequence where there was a special seat designed. It’s amazing what the magic of film could do that you would never know that I wasn’t actually out there floating in space with a bump. 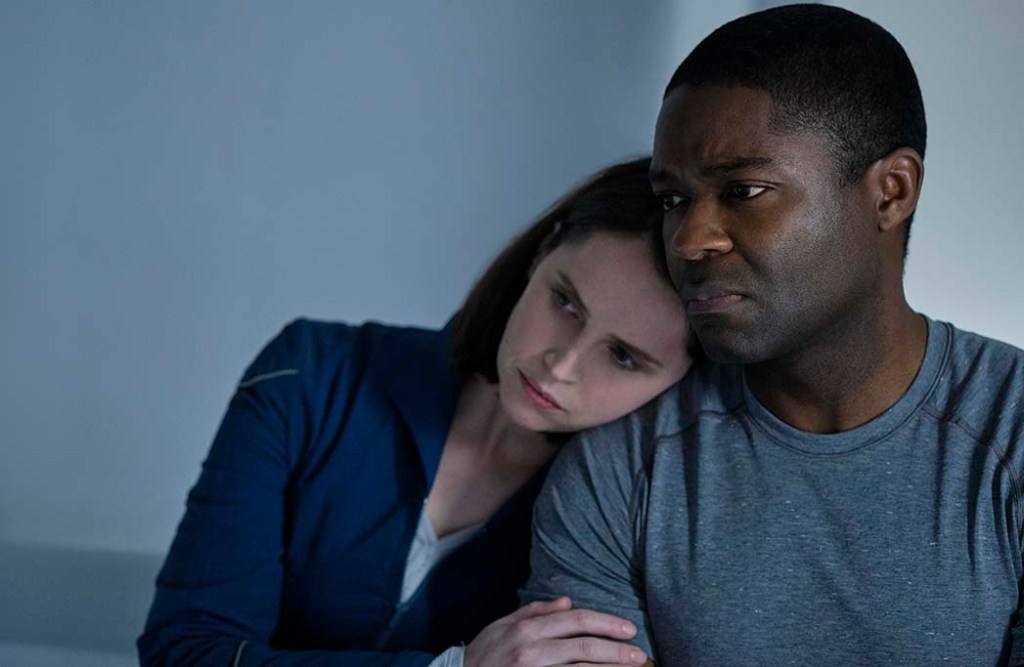 You’ve been very outspoken about pay parity. Had you ever experienced a situation where you were paid less than your male co-star?

I haven’t been. I’ve been very fortunate on that front. I’ve always felt very fairly treated in that respect and I’ve always found a transparency and have felt fairly paid for what I’m doing. But it’s certainly not the case for everyone.

Do you get the sense that it is getting better in Hollywood?

I think times are shifting so rapidly. I think we’re in a moment where we can’t be old-fashioned anymore. That we have to adapt. We have to keep fighting for parity, particularly in other industries where it’s not a foregone conclusion. I think it’s fantastic the amount of transparency there is now, and I think that is the key. We have to make sure that everything is open and there aren’t any secrets in these situations where people are being unfairly treated. Just being able to be in this moment post-#MeToo and see this shift and be part of the shift is just fantastic.

With Rogue One, you fought to be the highest paid. Did you face any resistance?

In that case, I was fairly paid for what I was doing and was fairly championed. And that’s also a testament to the people that I work with who had fought on my behalf as well. And I was very lucky that it wasn’t an issue.

The fate of your character, Jyn Erso, is unclear at the end of Rogue One. Have there been any talks about a sequel?

I just keep saying that reincarnation is totally possible in the Star Wars universe. (Laughs). So, I feel there’s unfinished business for Jyn, for sure.

I hear that Disney has an option for you to do a second film that it keeps extending. How would you like to see Jyn return — a sequel, spinoff or something else?

I think it would be fascinating to see her getting older and wiser and fighting the dark forces in the universe, of which there are many it seems.

In your upcoming Netflix film The Last Letter From Your Lover, do you and Shailene Woodley ever share a scene?

We don’t, actually, which we were quite sad about because I’ve been a big fan of Shailene’s for many, many years. Unfortunately, our paths never cross physically. They cross emotionally and spiritually. It was such a joyous film to make and be a part of, and I think people will enjoy watching it on a cozy afternoon with a glass of wine and some chocolate. It’s all we need at the moment.

Name a director you’re dying to work with.

Noah Baumbach. I’ve always loved his films. The Squid and the Whale. He’s just sublime — the combination of his depth and humor. I love Sofia Coppola. And Wes Anderson.

What’s next for you? Do you have things lined up?

I’ve recently started a production company with my brother, so we’re looking at various projects. A whole range of books, real-life stories. Our modus operandi is very much finding stories that are relevant and that have a weird fascination to tell and have a pressing need to be told. If there’s anything positive about this pandemic, it’s that it’s reminded us that time isn’t infinite.

What’s a film from the past that would fit your company’s sensibility?

Our favorite film when we were growing up was The Addams Family. My mother used to drive us out to the multiplex, which was about an hour from our house, and we went to go see The Addams Family, and that made a massive impression on us. So, we’ll definitely be looking at projects in that vein.