[This story contains spoilers for The Midnight Sky.]

Felicity Jones knows a thing or two about sticking a landing, be it her moving final moments as Jyn Erso in Rogue One: A Star Wars Story or the conclusion of her latest film, the George Clooney-directed The Midnight Sky.

The Midnight Sky sees Jones play astronaut Sully, who on a return trip to Earth learns that humanity has been wiped out. Her only contact on the planet is Augustine (Clooney), a dying scientist with a warning for Sully’s ship: Don’t return home. The film is full of sweeping landscapes and big sci-fi concepts, yet it is an understated final conversation between Sully and Augustine that proves to be the film’s most stirring moment.

“George had already shot his part, so I was able to watch that, which was really helpful to then inform what I was doing on my side,” Jones tells The Hollywood Reporter. “It’s what I loved about the script when I read it. It’s what made me want to do it, was that central relationship, that need for the two of them to find each other.”

The scene confirms that Augustine is in fact Sully’s father, and Jones prepared as much as possible for the moment, with Clooney reading off-camera with her on the day.

“It was one that I thought about a lot, meditated on a lot, in preparation,” Jones says of the scene. “Luckily I was shooting it toward the end of our schedule so I really felt like I had Sully and knew who she was and could give it everything I have.” 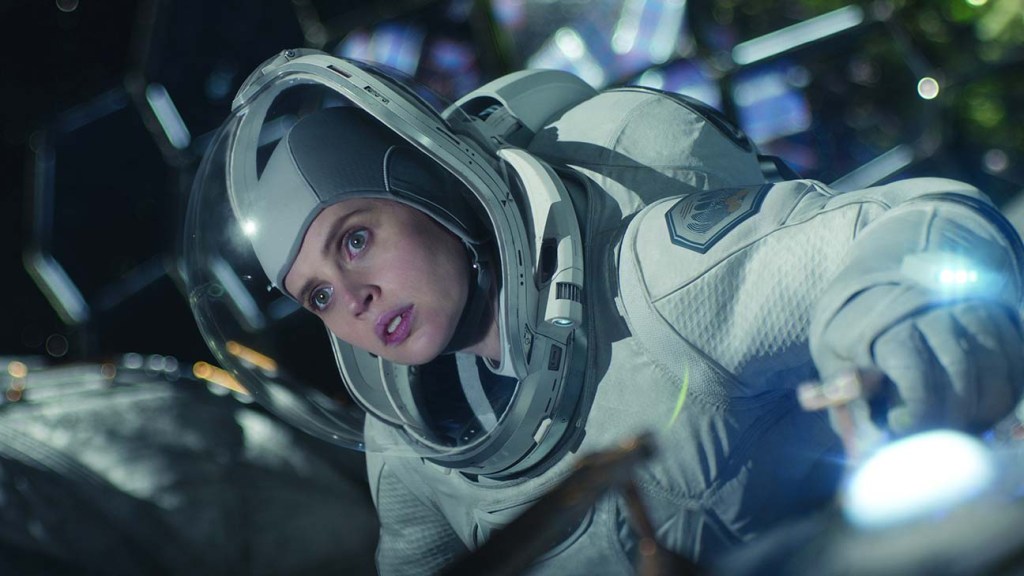 Audiences have remarked on the timely nature of Midnight Sky, coming during months when people crave connection amid a worldwide pandemic. For Jones, the film took on extra resonance as it is also a time capsule from her real-life pregnancy.

Clooney worked Jones’ pregnancy into the film, written by Mark L. Smith, after she informed the director before filming that she was going to become a parent.

“It feels like it was always meant to be that Sully would be pregnant in it,” says Jones, noting that her character had a daughter on Earth in the novel by Lily Brooks-Dalton.

Despite the final scene having added impact with Augustine saving not only his daughter, but also his grandchild, the conversation did not change from the original script.

“It was there at the very beginning that it would be a meditation not only on Augustine’s relationship with Sully, but also Sully’s relationship with her child,” says Jones. “That’s why blood is such a feature of the film. You see the blood going through the tubes at the beginning when Augustine is doing the chemotherapy. It is a sort of understanding of those relationships, of what in the end has meaning for us.”

Though Jones has left the Star Wars galaxy behind, her Rogue One co-star Diego Luna is currently filming the prequel series Andor for Disney+. Jones still thinks fondly on a week of filming in the Maldives to capture the sacrifice between her Jyn Erso and Luna’s Cassian Andor, both of whom die so that the plans of the Death Star can make it into Rebel hands.

“We shot it every single evening over a week to get the right light of sunset, to get the perfect pink light, so we knew that scene inside out by the end of the week,” says Jones. “It was just amazing to see how it morphed and shifted and changed. We shot that film in a very visceral, naturalistic, gritty way, which I think is why so many people responded to it. I think they loved that it felt so real and had elements of the ’70s Star Wars films that had that similar feeling of naturalism and reality.”

Jones will next be seen in Netflix’s The Last Letter From Your Lover, an adaptation of JoJo Moyes’ novel. It centers on Ellie (Jones), a journalist in London who uncovers 1960s love letters that tell the story of star-crossed lovers played by Shailene Woodley and Callum Turner. Jones, who also executive produces the Augustine Frizzell-directed film, was yearning to do something tinged with comedy and had also been looking to collaborate with Moyes.

“There was a real warmth to the story,” says Jones. It’s very much a feel-good film. It’s funny, it’s moving. I think people will enjoy watching it with some chocolates and a large glass of wine.”

Jones is aware that in troubled times, film can provide an escape, as an audience member but also as an actor. Reflecting on The Midnight Sky, one memory that stands out is imagining the landscape of K-23.

Says Jones: “I had a strong visual sense of it from George showing me imagery. … I think I was thinking about a beach in Italy. I just tried to think of a place that had great peace and happiness.”

Making of 'The Midnight Sky': How George Clooney Battled Extreme Cold (and a Pandemic) to Make His Sci-Fi Epic