#SoWhite, #SoMale — that about summarizes the conclusions of a sweeping new UCLA study of recent movies and scripted TV series.

In front of and behind the camera, Hollywood remains disproportionately white male says the report, even though global box-office figures, U.S. ratings and social media engagement are higher for product with diverse casts.

The report, the fourth in a series from the school’s Bunche Center for African American Studies, examined the top 200 theatrical film releases in 2015 and 1,206 broadcast, cable and digital platform television shows from the 2014-15 season. It found scant improvement in diversity from previous years, with figures back to 2011 not materially different from the latest numbers. 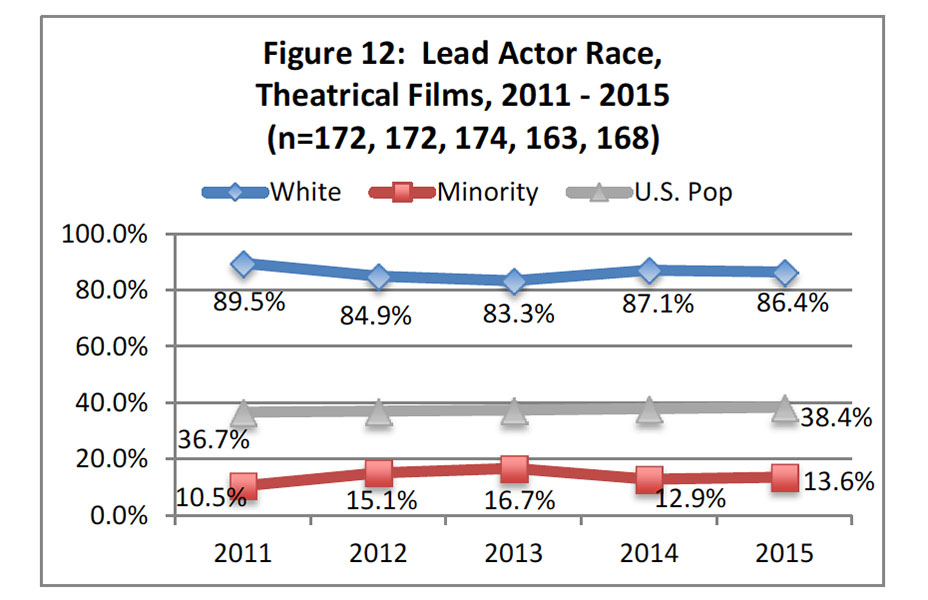 Yet the study, written by Center director Darnell Hunt and colleagues, found that global box office was highest in 2015 for movies with 21 to 30 percent minority casts. That was true in 2011 and 2013 as well, while in 2012 and 2014, the peak was reached by films with an even more diverse cast. The relationship between box office and minority leads was not stated, however.

In television, the leads for broadcast and digital platform shows were about 11 percent minority, figures that show an upward trend but which are still well below the corresponding share of the U.S. population. The cable figure was about 16 percent. The gender figures were higher: 38 percent of broadcast leads were female (down from parity in the 2011-12 and 2012-13 seasons), about 36 percent in cable and about 35 percent in digital.

Show creation remains even more heavily white male, with minority creators for only 8 percent of broadcast shows, 7.5 percent of cable shows and about 6 percent of digital shows. None of these metrics show an upward trend from prior base periods. Twenty to 22 percent of shows had female creators.

The study adds that the three major talent agencies, which function as gatekeepers, are heavily white, with minorities “woefully underrepresented.” In addition, available diversity programs serve “a relatively small number of the thousands of potential, diverse candidates” and initiatives focused on developing diverse creative executives “are even less readily available.”

Movies in 2016 Featured a Record Number of Women Protagonists