In his 100-film career, Japanese director Takashi Miike has very nearly single-handedly defined mainstream extreme cinema. Violent underground exploitation films may lurk in the ether, but most of those are gore for gore’s sake. Miike, who burst onto the international scene with 1999’s chilling Audition, however, always had something to say with his singular brand of bloody mayhem. And when he brought Hideo Yamamoto’s popular, ultraviolent manga Koroshiya-1 to screens in 2001, Miike effectively changed the game for comic book movies, for horror and for his own work.

After beginning his career with straight-to-video actioners and yakuza thrillers (Dead or Alive), Miike raised his level of art with Audition, then took it to unhinged heights with Ichi the Killer, which landed with a near-seismic shock. Initially banned in Malaysia as well as more forgiving markets like Norway and Germany, promotional barf bags were handed out for screenings at the Toronto and Stockholm film festivals, and stories of fainting viewers and stand-by ambulances abounded. Ichi the Killer essentially capped Miike’s first professional chapter, and marked the apex of his gorehound days before he ventured into genre experiments (Sukiyaki Western Django) and, recently, a dive into traditional filmmaking — at least by Miike standards. 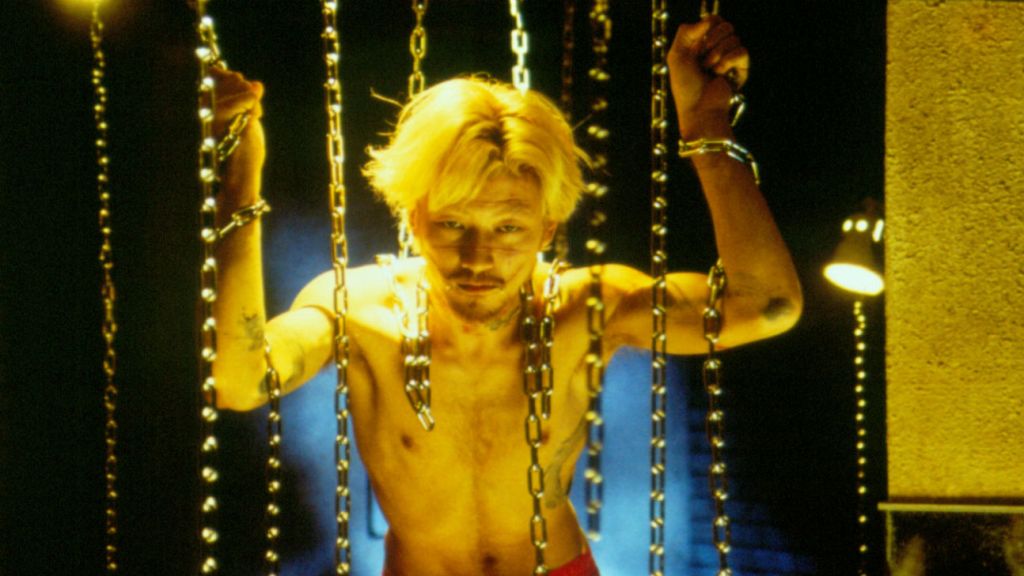 Regardless of whether or not one comes down on the side of the film as a clever, reflexive condemnation of media violence, or as a trashy exploitation flick that glorifies it, Ichi is unforgettably visceral. Dipping into themes of memory, emotional manipulation and our own consumer culpability, the story, such as it is — Miike is not as interested in narrative structure as in tone — begins with our “hero,” Ichi (an ironically baby-faced Ohmori Nao) masturbating on an apartment balcony and peeping on a pimp brutally raping and beating one of his prostitutes. From there, Ichi becomes a pawn in Jijii’s (Tetsuo legend Tsukamoto Shinya) plan to pit rival gangs against each other, while sadomasochistic Yakuza enforcer Kakihara (Asano Tadanobu) tracks him down. Amid the mind-bogglingly gruesome torture, Miike finds time for the blackest humor (Kakihara’s hilarious speech impediment as a result of self-mutilation stands out) en route to a brazenly bleak, gonzo finale.

Ichi cast a long shadow. In 2001, manga adaptations may have been commonplace in Japan but comic books were still marginalized in Hollywood. What is Ichi if not a superhero, fueled by rage and decked out in a black latex bodysuit, adorned with secret weaponry? The Joker of The Dark Knight recalls Kakihara’s slit mouth and pinned cheeks — not the other way around. Poorly made extreme films have existed since at least the 1970s, but it was after Ichi that the landscape expanded to welcome the so-called torture porn subset, France’s brutal extreme horror movement (Martyrs), and confrontational art films like A Serbian Film.

But it is Ichi the Killer’s seemingly bottomless capacity for a challenging sort of empathy that made it a cinematic touchstone. Arguably Miike’s strongest film, it’s ultimately about two men groomed to be attack dogs, one who learned to revel in pain, only feeling despair in its absence, and one so sensitive and easily manipulated he can’t help but conflate affection and violence. It set a new bar for provocative genre film, and there’s been nothing like it since. Thank goodness.