A week after people got their first glimpse of Margot Robbie in character as Tonya Harding in I, Tonya, the upcoming biopic about the infamous figure skater, new pictures have emerged, offering the first look at Sebastian Stan as Harding’s ex-husband Jeff Gillooly.

In the image below, Stan is seen in character sporting a mustache, striped polo shirt and faded jeans while Robbie, as Harding, is seen with a short hairdo dressed in red.

The film, which is being directed by Craig Gillespie and produced by Robbie under her LuckyChap Entertainment banner, focuses on the 1994 figure-skating scandal involving Harding and rival Nancy Kerrigan.

Kerrigan was attacked at the U.S. Figure Skating Championships by a man who struck her on her right knee with a blunt object. The incident was traced back to Harding’s ex-husband Gillooly and others, who subsequently spent time in prison. Harding pleaded guilty to conspiring to hinder prosecution and was banned from competitive figure skating and stripped of her national title.

Allison Janney is set to play Harding’s mother in the film. In addition to Robbie, I, Tonya is being produced by Tom Ackerley and screenwriters Bryan Unkeless and Steven Rogers. 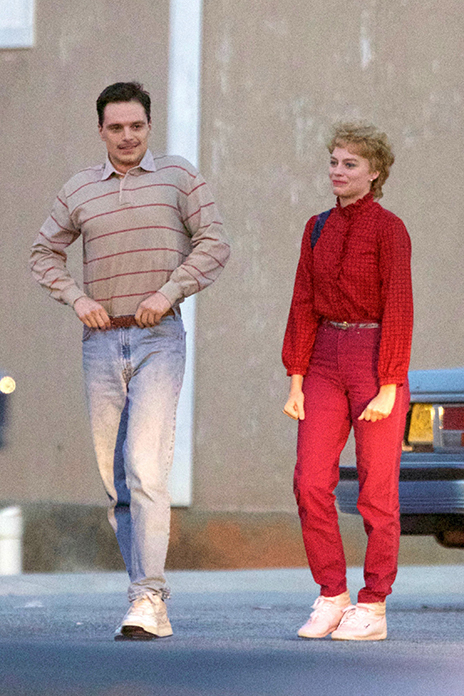