Perhaps no watch enjoys such a storied coupling with a history-making event as Omega’s Speedmaster and the Apollo 11 moon landing: Neil Armstrong and Buzz Aldrin both famously wore the timepieces when they touched down on the lunar surface on July 20, 1969. And the style will be among the four Omegas featured on the wrists of Ryan Gosling, who plays Armstrong, and his co-stars when First Man opens in theaters Friday.

Omega has been working with the Damien Chazelle-helmed production since July 2017. “We have been in close contact with the team, especially the prop master, to ensure we could provide all the necessary timepieces they needed,” explains Omega CEO Raynald Aeschlimann. “In terms of authenticity and correct models, the experts at our Omega Museum [in Bienne, Switzerland] were on hand to provide period-correct models that would remain as close to true history as possible.”

The marriage of space exploration and the Speedmaster, originally created as a watch for racecar drivers in 1957, actually dates seven years prior to Apollo 11, when astronaut Wally Schirra, who had purchased the watch for his personal use, wore the piece when he orbited Earth six times aboard the Sigma 7 on Oct. 3, 1962, during NASA’s Project Mercury program. With a chronograph ultimately deemed a vital part of any space mission, in 1964 NASA brought in a variety of models and brands for testing but by 1965 determined that the Speedmaster performed best under rigorous conditions, and it was officially certified by the space agency to be worn both for training and all manned missions. (The relationship between NASA and Omega continues to this day, including on the International Space Station.)

Neil took this of me on our way to the moon. I look pretty confident showing off my @omegawatches. #Apollo11

Four references were provided to the First Man production by Omega: a CK 2605 that dates to 1954, seen on Gosling as the watch Armstrong wore in his daily life; the Speedmaster ST 105.003, worn by Gosling as Armstrong undergoes training at NASA; a 1960s-era Omega stopwatch used by NASA engineers during training exercises; and finally, the Speedmaster ST 105.012, historically dubbed the Moonwatch and, as seen in First Man, worn by all members of the Apollo 11 crew – Gosling as Armstrong, Corey Stoll as Buzz Aldrin, and Lukas Haas as Michael Collins – during the mission. Aeschlimann says some pieces came from the Omega archives, while watchmakers in Bienne also produced 10 period-correct Speedmasters of each model for use as needed. 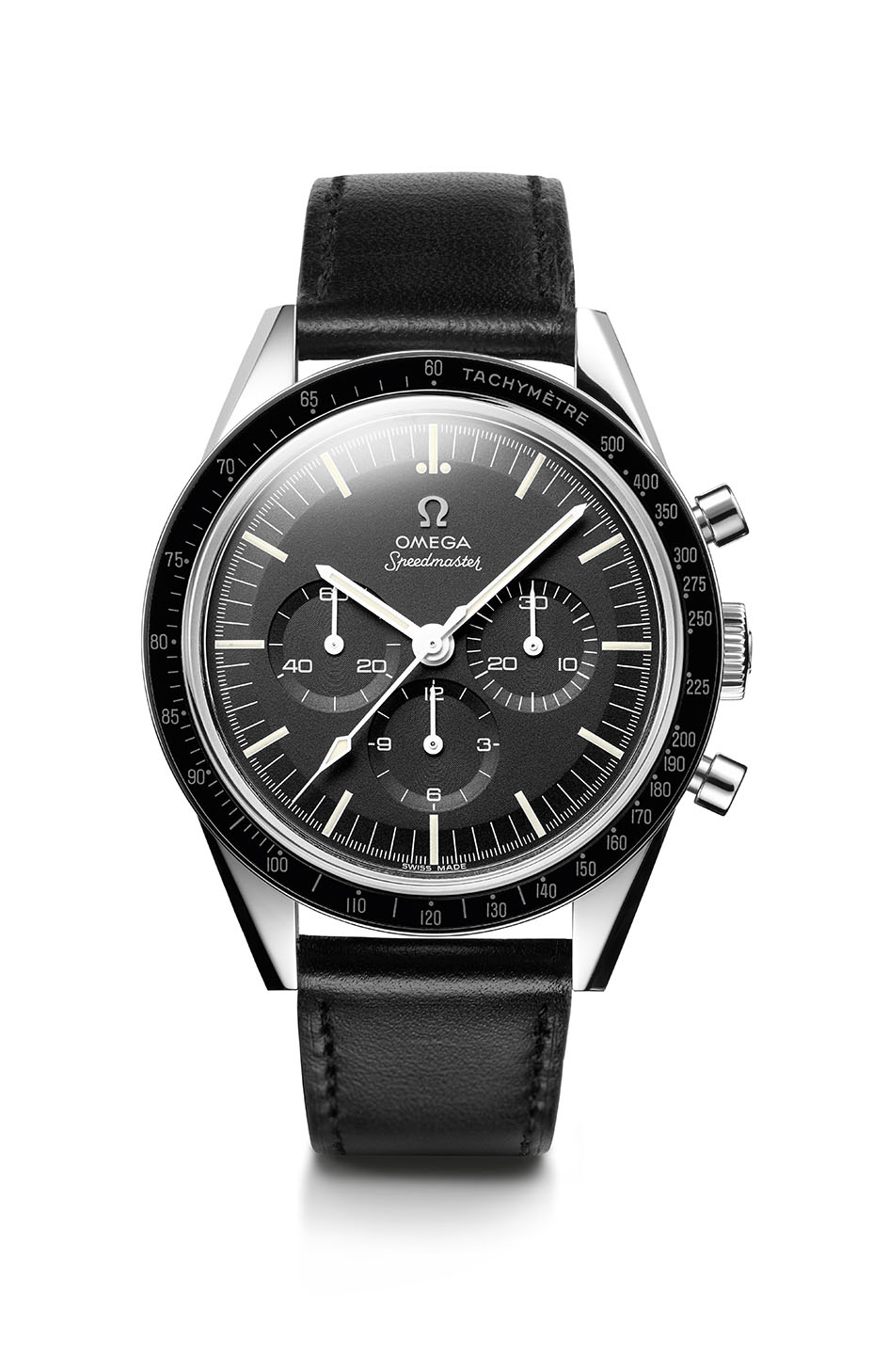 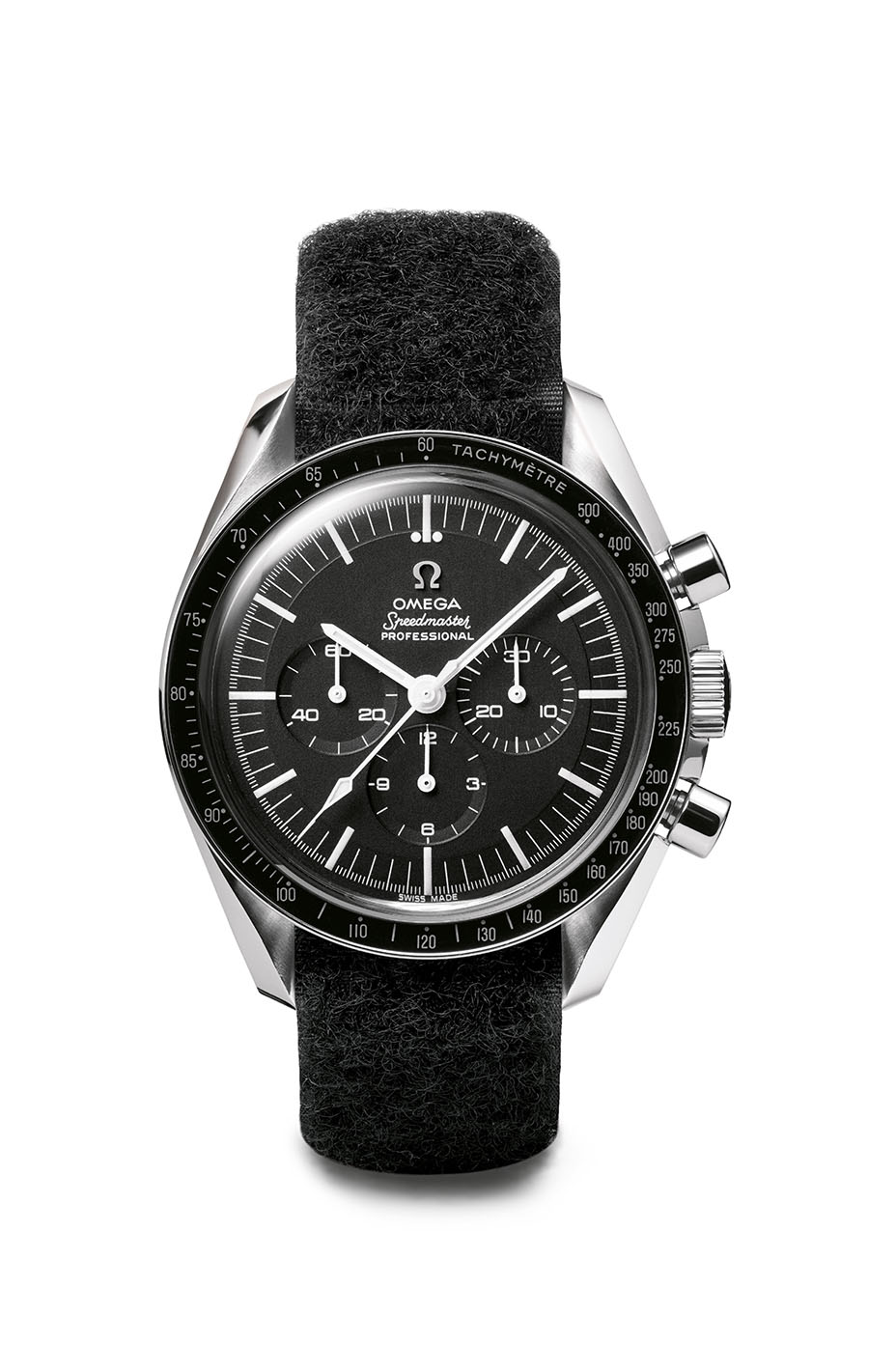 While the watches may be spotted easily in some scenes, this wasn’t product placement, Aeschlimann emphasizes. “We provided four specific models, as requested, to help bring authenticity to the story and recreate the genuine NASA kit that the astronauts wore,” he says. “There has been no input from Omega with regard to time onscreen or how clearly the watches were seen. That was entirely up to the production team.”

Another moment of space lore that may be more subtly reflected in First Man: Armstrong didn’t wear his Speedmaster when he took his famous “one small step for man” walk: He left the watch in the Eagle lunar module because one of the onboard timers wasn’t working properly, and he felt it was more important that his watch stay behind as a backup. It was Aldrin, joining Armstrong roughly 20 minutes later, who ultimately wore the first Speedmaster on the lunar surface. (While Armstrong’s Speedmaster has resided in the Smithsonian Air & Space Museum and been lent out for special exhibitions, the location of Aldrin’s watch remains an unfortunate mystery: It was shipped to the Smithsonian but lost in transit.) 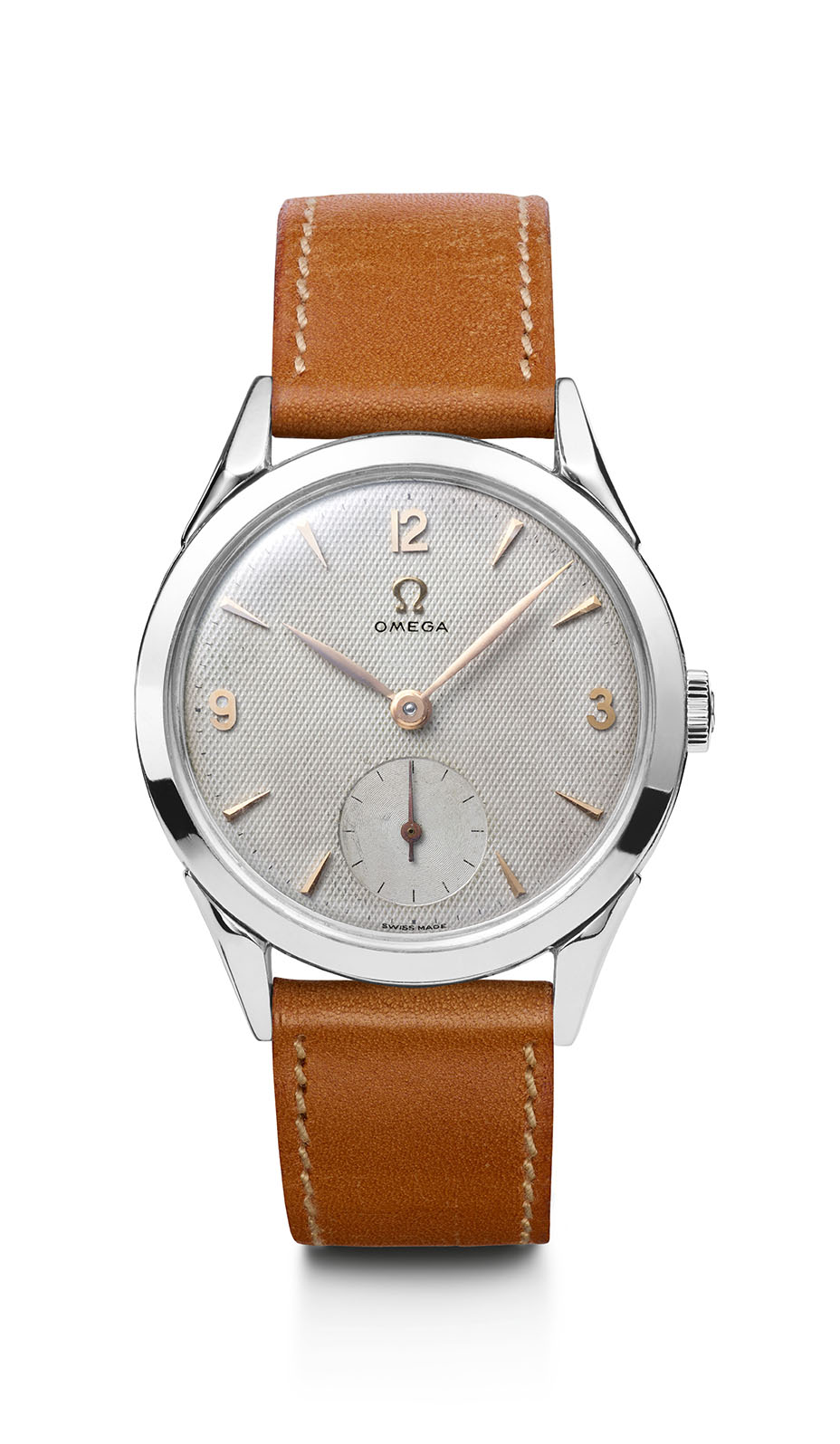 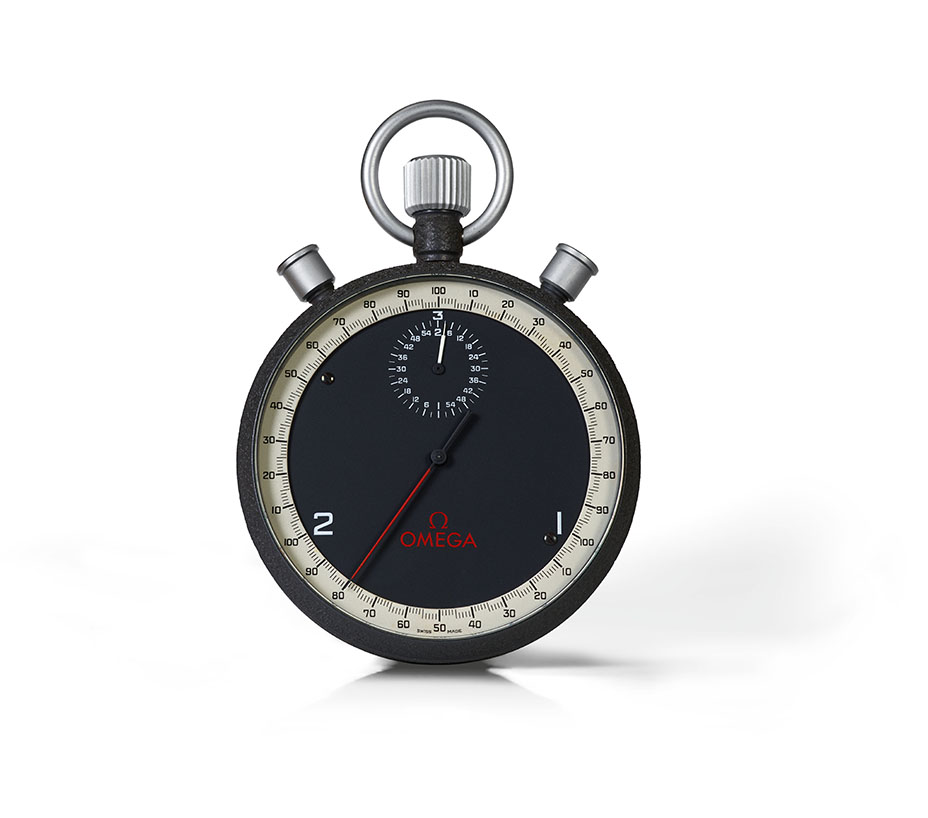 As of late last week, Aeschlimann hadn’t yet viewed the completed First Man, which is already generating awards-season buzz, though he has seen “a few sneak-peek scenes,” he says. His initial impressions? “What’s really apparent to me is the authentic way they’ve shown conditions inside the spacecraft. The close-up way those scenes are shot, with the huge noise and the great acting, all show how incredible and difficult those missions were. It brings to life the real bravery of the astronauts and makes it quite a unique and pioneering space film.” (For another Speedmaster-on-film moment, don’t miss 1995’s Apollo 13, in which Kevin Bacon’s Jack Swigert employs his Omega during a complicated manual maneuver performed by Tom Hanks’ Jim Lovell and Bill Paxton’s Fred Haise inside the crippled spacecraft.)

To celebrate the 60th anniversary of the Speedmaster’s original release, in 2017 Omega debuted the Moonwatch Professional Chronograph, a 42mm piece that includes the same manual-winding movement found in the Apollo 11 watch while also featuring both a stainless-steel bracelet and an astronaut-friendly NATO strap. With a tachymetric scale on the black bezel, small seconds subdial, 30-minute recorder, 12-hour recorder and a central chronograph hand, the watch retails for $6,250.

And with the 50th anniversary of the Apollo 11 mission on the horizon, look for Omega to continue highlighting its NASA history beyond First Man. “Omega’s space heritage is one of the pillars of our brand,” Aeschlimann says. “It’s a relationship built on trust. When NASA began testing a range of watches from different companies back in 1964, only the Omega Speedmaster survived. From the start, they knew they had a timepiece that could be relied on in the most extreme conditions. And since then, we’ve been there beside them for some truly historic moments.” 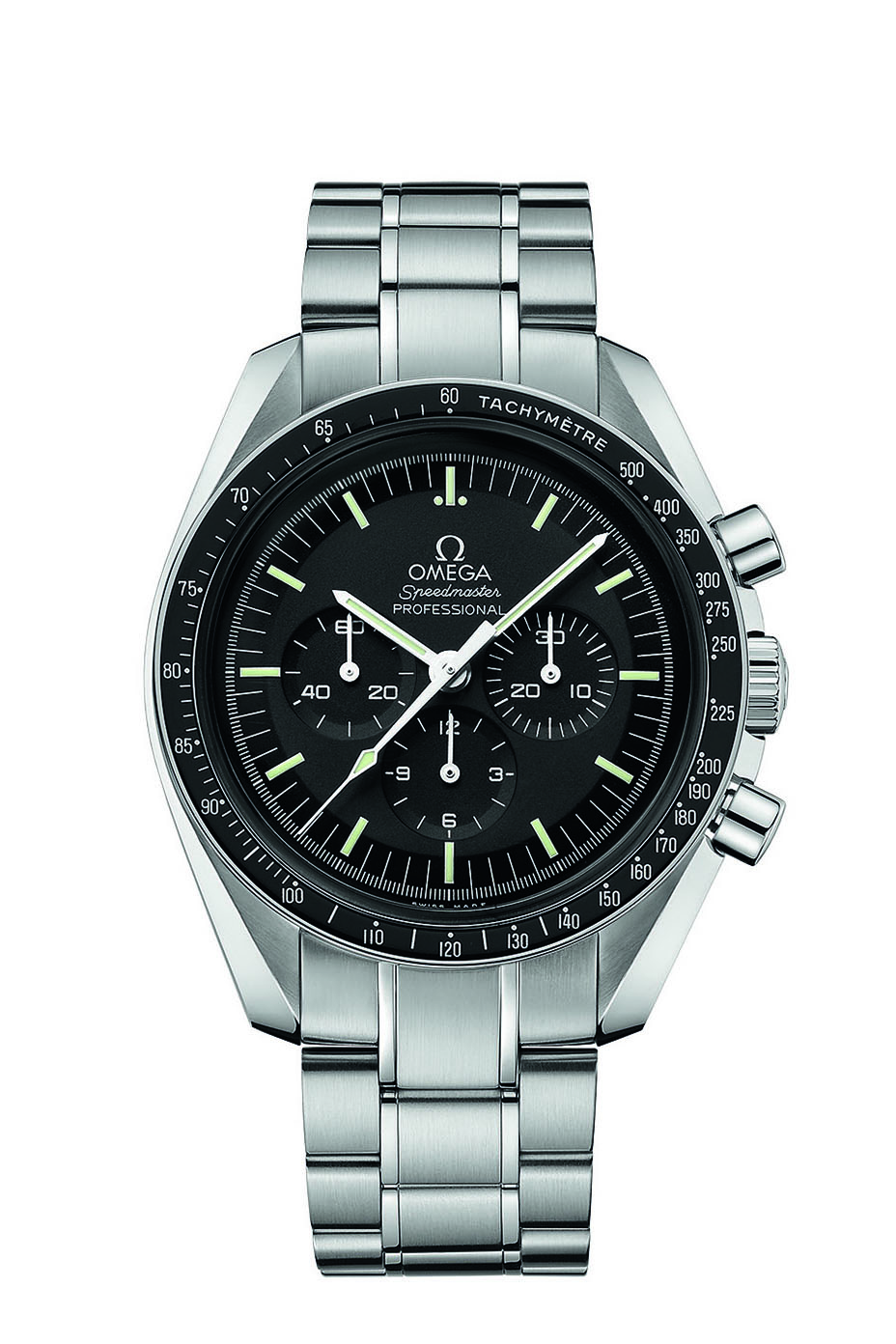