I’m not exactly a tough sell when it comes to films about slipping the surly bonds of Earth. I had space posters plastered all over the walls and ceiling of my room, and models of the X-15 rocket plane and Saturn V on bookshelves that held the dog-eared issues of National Geographic during the space race years. After all, it was the era’s greatest adventure. (Come to think of it, those issues are still on my bookshelves.)

And now, as we approach the 50th anniversary of the Apollo 11 mission that put Neil Armstrong and Buzz Aldrin on the moon in July 1969, all of us space buffs can wallow in nostalgia for the heady days when lunar colonies and manned flights to Mars seemed within reach. In October, First Man showcased Ryan Gosling taking on the unenviable task of portraying the famously private and guarded Armstrong, the commander of Apollo 11. And today, Apollo 11, a documentary from Neon and CNN Films, opens for a weeklong Imax run before going into wider release March 8.

A decade ago, when I was executive editor of Popular Mechanics, the magazine published an oral history commemorating the 40th anniversary of the first lunar landing. Even after all that time, the personal recollections of more than three dozen eyewitnesses to history — flight directors, launch engineers, retrofire officers, astronauts at mission control, even crewmembers — still conveyed the excitement, risk and drama of that epochal flight.

Framing the material as the ultimate team sport — 400,000 technicians, scientists and engineers contributed to the colossal lunar effort, according to NASA — even convinced the media-averse Armstrong to participate in our project, albeit by email. It was quite a coup. (Aldrin was at the opposite end of the temperament spectrum; the extroverted astronaut was eager to work with us on a cover story that explained in great detail his “cycler system” of space vehicles for getting astronauts to and from Mars.)

For a space junkie like me, First Man was a bit of a letdown. Although the film includes some vertigo-inducing adventures in the loss of aerodynamic control, it seems more interested in exploring family drama than in conveying the mind-blowing audacity and complexity of the Apollo 11 mission.

Fortunately, Todd Douglas Miller’s new documentary has its head in the stars. As straightforward as its title, Apollo 11 portrays the human and engineering scale of the mission chronologically, from flight prep to splashdown, with high-resolution, large-format footage; simple but effective graphics; onscreen time signatures and explanatory text; and Walter Cronkite’s poetic voiceovers during the opening sequence and prior to the moon landing itself. No talking heads slow down the story; the only voices on the soundtrack date from those nine glorious days in July 1969, culled from 11,000 hours of audio recorded during the event.

What’s most remarkable about the project is that over the decades, hundreds of TV and film productions have chronicled the first moon landing, yet Miller estimates roughly 70 percent of his documentary is comprised of previously unseen footage. How so? It all began with an unusual email in May 2017, fairly early in the production. The filmmakers had been working with Dan Rooney, a supervisor at the National Archives in College Park, Maryland, scanning, digitizing and cleaning up 16mm and 35mm film from the mission. “Most emails you get from an archivist are pretty plain, not a lot of excitement,” says Miller. “This one had words in all caps and was filled with exclamation points.”

Rooney had unearthed reels of 65mm film marked “Apollo 11.” “I’ve been around the block, I’m a realist,” Miller recalls. “It seemed intriguing, but we didn’t know what was on them, the condition or even how much material there really was.” Rooney brought a couple of reels up to New York, and “that’s when our jaws hit the ground,” Miller says.

It turned out the bowels of the National Archives held a treasure trove of more than 150 reels of 65mm footage from the mission, material that had been filed and forgotten as the Apollo program wound down in the early ’70s. When Miller’s team learned the size of the secret stash, “we were speechless,” the director says. “I don’t think we talked for an hour.” 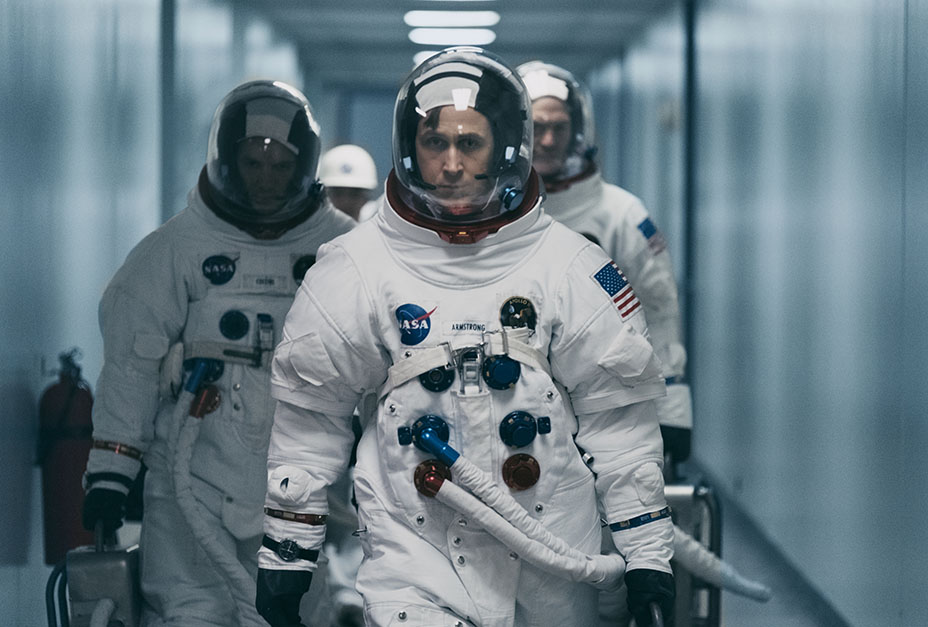 Scanned, restored and meticulously synched with the cleaned-up audio, the large-format footage takes you on a wild ride. It’s an oft-told tale that still manages to amaze. The power of the Saturn V’s first-stage engines thundering to life is especially awe-inspiring in the NASA engineering team’s high-speed close-ups as the 36-story-tall rocket lifts ever so slowly off the launch pad. (“It took the restoration team weeks to clean up the original footage,” notes Miller.) Other NASA film teams with large-format cameras spread out around Cape Canaveral in vans and helicopters to capture the palpable excitement of a million people watching on beaches, motel balconies and car roofs as a pillar of crackling fire rose in the sky.

A pair of favorite scenes: the lunar landing, which Armstrong later called the most challenging segment of the entire flight. The bug-like craft nearly runs out of fuel as Armstrong takes over the controls and flies semi-manually, calmly looking — and looking — for a level place to park. The onscreen graphic ticks off how much gas is left in the tank, and the flight computer flashes red 1201 and 1202 alarms and sounds the warning klaxons as the lunar surface, pocked with craters and littered with boulders, slides past in exquisite, otherworldly detail. The lander touches down with mere seconds to spare — life-and-death adventure that requires no Hollywood enhancements.

The other key scene is the split-screen docking sequence between the lunar module Eagle and the mother ship Columbia orbiting the moon. Michael Collins, the Columbia pilot, films the Eagle soaring up from the lunar surface — “they came up from below as if riding on a rail,” Collins later remarked — while Armstrong and Aldrin film Columbia gliding into range. It’s as though a third camera positioned nearby in space is magically filming the rendezvous high above the moon. “Stylistically, we built the rest of the film around that sequence,” says Miller.

Armstrong’s grace under pressure remains as uncanny as ever. But then, ice water flowed in lots of veins during those groundbreaking missions. As one member of the team at mission control noted in our oral history, “We were steely-eyed missile men. That was our deal.”

James B. Meigs, the editor-in-chief who commissioned Popular Mechanics‘ magnum opus in 2018 (and the onetime editor-in-chief of entertainment magazine Premiere), thinks a case could be made that Apollo 11 was the most complex technical undertaking in human history to that date — at least in terms of an endeavor that had to roll out in real time. “Something like D-Day involved a lot more people and equipment,” Meigs notes, “but the different elements weren’t that tightly coupled — to borrow a term from disaster science. A plane might crash, but that wouldn’t cause ships to sink. But a space mission is the apotheosis of a tightly coupled complex system.” A failure of almost any part can propagate throughout the system in unpredictable ways, which happened on the Apollo 13 mission. Everything on Apollo 11 had to work in concert, following precise sequences, but also remain flexible enough to respond to unexpected events. “The fact that they were able to continue the lunar module descent despite the computer problem showed just how agile these guys were at thinking on the fly,” says Meigs.

All that superlative engineering, intense training and systems management — and yet here we are, half a century later, still stuck in low Earth orbit. But not forever, according to Miller. “As someone who’s made a dinosaur film [Dinosaur 13] and has spent a lot of time with palaeontologists, I tend to think in geological terms,” the director says. “It’s absolutely astounding what we’ve accomplished since the Wright brothers took flight. Our journey into the universe is inevitable.”

David Dunbar is the former executive editor of Popular Mechanics and editor of the book Debunking 9/11 Myths: Why Conspiracy Theories Can’t Stand Up to the Facts.