In 1990, director Joel Schumacher entered the medical world with his supernatural thriller Flatliners. The story of five medical students who attempt to get a glimpse of the afterlife certainly looked flashy — courtesy of director of photography Jan de Bont — and boasted a discount Brat Pack consisting of post-Lost Boys Kiefer Sutherland, Julia Roberts (her career on fire thanks to Pretty Woman opening months earlier) and Kevin Bacon.

The film was a financial success, despite poor reviews — but from a 2017 lens, is particularly problematic when it comes to issues of gender and race. The newly released remake from Niels Arden Oplev suffers from the lack of de Bont flash (and is also failing with the critics), but it should be praised (sort of) for how it attempts to rectify some of the original film’s grosser examples of misogyny.

It’s hard not to notice the original film’s white American frat boy mentality. Kiefer Sutherland’s Nelson is an alpha male who thinks he’s God and worthy of fame, while William Baldwin’s Joe is an Lothario with a penchant toward secretly recording women he has sex with.

The remake upends this by casting three women, one of whom is African-American (Kiersey Clemons) and another who is of Bulgarian descent (Nina Dobrev). One of its leading men, Diego Luna, is Mexican. Meanwhile, the lone white man, James Norton’s Jamie, is presented as the prototypical privileged American male; he’s described as a “trust-fund baby” who dreams of moving to Los Angeles and becoming the “Anderson Cooper of celebrity medicine.” The diverse ethnic and gender makeup presents a more realistic worldview that doesn’t seem as focused on privilege as the original — there’s more of a sense that these students are where they are through merit.

By not relying solely on men, the remake sidesteps one of the original’s chief sins: it’s treatment of Julia Roberts’ Rachel. Rachel in the 1990 iteration isn’t just the only female “invited” to join in the flatlining experiment; she’s practically the only female student in the film’s medical school. Because of this uneven ratio, Rachel becomes a sex object for Nelson and white knight David (Kevin Bacon) to fight over. And David is intent on protecting Rachel from anything bad because … she’s a female. 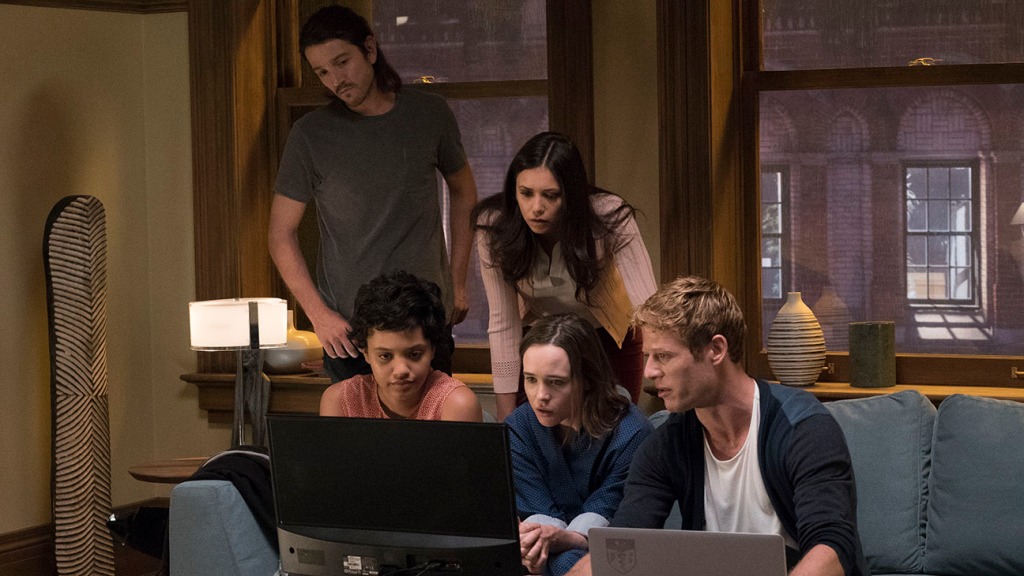 Today, it’s hard not to see Flatliners as representative of what author Susan Faludi calls the “backlash” era of films; a from the late ‘80s into the early ‘90s that presented reactionary male opinions against second-wave feminism of the 1960s. In this case, Rachel is little more than a prize for whichever man can save her life. Rachel is such a figurehead character that her very soul is literally put in danger. Unlike the other male characters who are haunted by living people they’ve wronged, Rachel feels guilt over her father’s suicide, an Electra complex personified. It is only through David’s pure love for her that she figures out how to absolve her guilty conscience.

In the remake, it is a woman who instigates the entire flatlining experiment, Ellen Page’s Courtney. Her motivations are emotional, unlike Sutherland’s God-like desire for recognition as a pioneer, and result in real consequences. By putting the plot in the hands of a woman, it ends up avoiding the misogynistic undertones the original film thrives on. In 1990, no one blinks an eye toward the discovery that Baldwin’s Joe is making illicit porn with unsuspecting women, and the film’s happy ending for everyone reminds audiences of the “boys will be boys” mentality we are still trying to overcome in 2017. There are no consequences.

In the new movie, “boys will be boys” is replaced with sexually charged women who, interestingly, are punished by external factors not related to their sexuality. Clemons’ Sophia is able to have sex with a colleague and it’s empowering. Similarly, Dobrev’s Marlo reinvents the Roberts’ character into being an active participant in her own narrative despite the film reiterating the theme “love can overcome a guilty conscience.”

Unfortunately, the Flatliners remake doesn’t bring everything in line with 2017. Jamie may not be the sexually reprehensible cad that the Baldwin character was, but he is still representative of white male entitlement. The “sin” that haunts him involves a one-night stand and an abortion that, because of his wealth and charm, is easily overcome. He’s able to atone and get the audience back on his side because of a narrative privilege. Conversely, where the original film ended happily with everyone practically laughing by the end, a character’s death comes off like a “pound of flesh” moment wherein only so many women or minorities are allowed to make it out.

Still, the remake is at least a step forward in the more representative landscape in Hollywood, and that says a lot.

'Flatliners' Is Flatlining With 3 Percent Rating on Rotten Tomatoes