“The world is a totally evil place. It’ll kill you. It doesn’t matter what your dreams, or hopes, or ambitions are. It doesn’t matter if you have a new boyfriend or a new girlfriend, or you’ve got plans for the future. You can forget those plans, because you’re gonna wind up dead.”

No, that’s not a monologue from Christopher Landon’s latest slasher-comedy movie, Freaky. Those words were spoken by esteemed film critic Roger Ebert in his review of Friday the 13th: The Final Chapter (1984) on Siskel & Ebert.

The quote may bear some familiarity to horror fans. Afterall, it’s one of the most referenced quotes in horror documentaries and journalism as evidence that film critics just didn’t get horror movies, or more specifically slasher movies. Ebert, as brilliant as he was, didn’t always get the appeal of the slasher movie, and he wasn’t alone. The Friday the 13th films in particular created a critical disconnect between audiences and movie reviewers. But maybe Ebert had a point about the nihilism on display in so many slasher movies.

This isn’t to say his merciless takes on the subgenre or moral estimation of its audience was right. Slashers are one of horror’s most fascinating subgenres. But there’s something interesting raised in his concern about the lack of empathy in so many of the ’80s slasher movies that debuted at an almost weekly rate, something that has pushed the slasher movie to evolve. And something that I believe makes Christopher Landon such an interesting voice in the contemporary slasher movie space.

In Blumhouse and Universal’s Freaky, which debuts in theaters and drive-ins this Friday the 13th, before heading to premium VOD on December 4th, Millie Kessler (Kathryn Newton) swaps bodies with the Blissfield Butcher (Vince Vaughn) after he stabs her with a mystical Aztec knife. The film is obviously a play on Freaky Friday (1976) as much as it is on the Friday the 13th series, along with other slasher movies. Alongside her friends, Nyla (Celeste O’Connor), Josh (Misha Osherovich), and Booker (Uriah Shelton), Millie sets out to undo the change before it becomes permanent while the Butcher uses her body to rack up a body count in her small town. 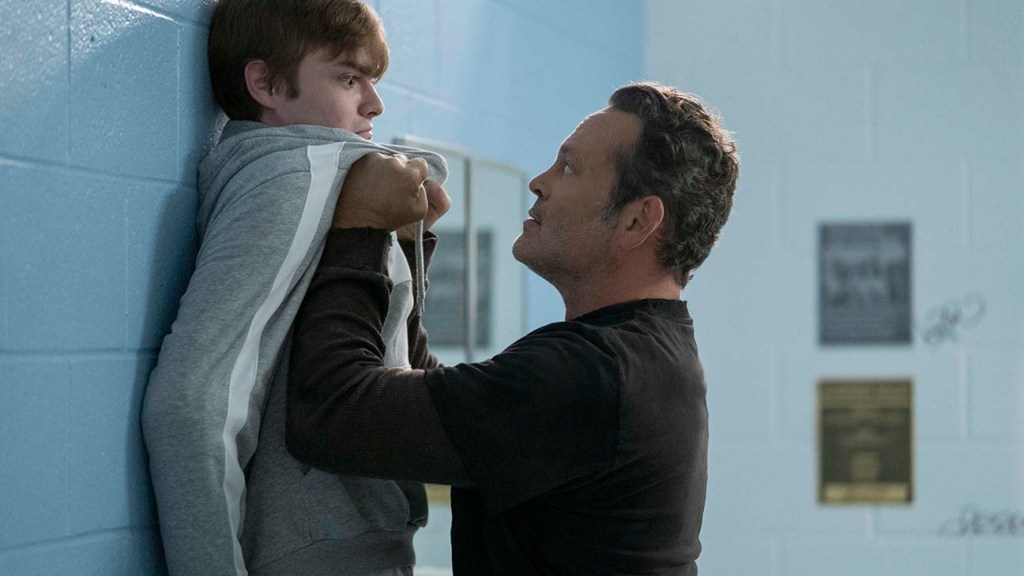 Tonally, Freaky shares a lot of similarities with Landon’s previous two films, Happy Death Day (2017) and Happy Death Day 2U (2019), which made a mashup of slasher movie tropes alongside high-concept comedies Groundhog Day (1993) and Back to the Future (1985). While all three of Landon’s slasher comedies rely on the strength of likeable characters and a certain camp quality, Freaky differs first and foremost in that it has an R-rating. For those who thought the Happy Death Day films could have used some blood, Freaky delivers in buckets, and throws in a few dismembered bodies for good measure.

While the brutality of Freaky, most of which is played out on high schoolers, may have made Ebert lament for society, Landon, who also co-wrote the film alongside Michael Kennedy, isn’t employing the same nihilism of his ’80s slasher predecessors and influences. Freaky has a beating heart, one that asks the audience to care for its central characters, and to trust that Landon will use them as people, rather than as pieces of meat. The filmmaker shows an awareness to horror tropes, not only in terms of the oft-discussed final girl but also her friends, who typically end up hanging from a meat-hook or vivisected by a machete. The fact that Nyla and Josh are Black and gay respectively, yet not used as a means to callously increase the body count, creates a stark difference from how those characters would have been used in the past, even in the slasher reboots and remakes phase of a decade ago. Much like he did in the Happy Death Day films, Landon creates a circle of protection around his central characters, not unlike Wes Craven did with his Scream movies, putting them in harm’s way but also valuing their lives. All of which is to say that their existence in the film and the way in which they are used refutes Ebert’s criticism of The Final Chapter. It does matter what these characters’ hopes, dreams, and ambitions are. It does matter if they have new relationships, and families, and plans for the future. That’s not to say that those characters who do find themselves on the butcher’s block don’t have any of those things, but as an audience we feel less bad about them. In the inverse of the kind of Reagan-era conservatism that dictated who was innocent and pure in ’80s slasher movies, Landon’s films are guided by a kind of liberalism that suggests characters either get on board with 21st century progressiveness or meet a chainsaw.

On the surface, Millie couldn’t be more different than Tree (Jessica Rothe) of the Happy Death Day films. She’s the bullied rather than the bully, and possessed by a certain meekness that’s more of a curse than a blessing. This meekness and hesitant, gentle nature is a blast to see Vaughn play around with. As is the calculating, and threatening menace of the Butcher that Newton taps into. But amidst the laughs and gender dynamics the film clearly has fun playing with a larger commitment to using this body swap as a means for Millie to explore her trauma. The death of her father has left Millie reluctant to move forward with her life, and feeling as though she has to protect her alcoholic mother, Paula (Katie Finneran). Millie struggles with the idea of what it means to be an ideal daughter, a protector and provider, a role her cop sister, (Dana Dori) has largely abandoned. And with that struggle comes this notion of what it means to be a strong young woman, and the multifaceted nature of that, which doesn’t necessitate a transformation into Ellen Ripley or Sarah Connor for that strength to be apparent.

In Landon’s exploration into the trauma of his leading ladies he allows them to emerge from their experiences with horror all the better and stronger for it, rather than hollowed out and retraumatized. The writer-director puts an empathetic stamp on the horror genre, and modifies the idea of the final girl into something less antiquated and chaste. Millie and Tree ultimately cast very different portraits of survivors, but in their ability to process grief and take ownership over who they are, it’s hard not to view their stories in the context of one another’s. Hopefully, there’s a future film out there where Landon can get the two characters in the same room, if only for a single conversation. In looking at Landon’s three-film modern slasher cycle, Happy Death Day, Happy Death Day 2U, and Freaky, it becomes clear that the goal of their horror isn’t bleeding and dying. It’s bleeding and healing, and that’s a message we could all use right now.