Just ahead of the 1941 New Year, silver screen icon Gary Cooper wrote a column expressing his concern about the next generation of actors, saying that “hundreds of new actors are tried out each year, yet fewer and fewer faces remain on the screen.” The star, who would go on to win his first best actor Oscar in 1942, thought the studio system needed improving. Cooper’s original Hollywood Reporter column is below.

Back in 1907 the old Selig company decided to produce The Count of Monte Cristo in a place called Hollywood. That was the first motion picture ever produced in the cinema capital.

For awhile, difficulty was encountered in casting the role of the Count. After some scouting about, the fellow was discovered working in a Los Angeles dime museum as a hypnotist. In the course of preparation, an enterprising soul with an eye to the verities of the story’s period, suggested that the actor ought to wear a long-haired wig.

In those early movie days, there were no elaborately stocked makeup departments in the studios. When an article of dress or a scenic prop was needed, it was generally rented. So, following custom, the hairpiece was borrowed from a local shop and 10 silver dollars deposited for its safe return.

If you remember your Dumas, you know that some of the most exciting scenes in Monte Cristo take place on a rock surrounded by raging seas. Those scenes were being shot off the shores of Santa Monica, only a few miles west of Hollywood, when a sudden wave washed the player and his wig into the turbulent waters. Both started drifting in the general direction of Honolulu and all points west.

The director and crew were panic-stricken. Failure to recover the wig would mean the loss of 10 dollars. Several risked their lives attempting to salvage the elusive hairdo, but in vain. Some very precious minutes had elapsed when someone bethought himself of the actor drifting out to sea. A boat was launched and finally the fellow was hauled in.

I have always believed that someone should dig up that thoughtful chap’s name and erect a monument to him at Hollywood and Vine. He really had vision: foresight enough to realize the value of a star to motion pictures.

Too Much Faith in Luck

For today, as then, what Hollywood needs are good actors of star caliber. We’re just as shy of them now as in 1907, when the Selig outfit was lucky enough to discover one in a dime museum. Luck still plays too important a part in the development of top name players. Among the 30-odd-thousand actors of all types in Hollywood, there are at best only a few handfuls of firmly established stars.

A checkup reveals that most of these have been stars for some years. Others must take their places someday. But where are they coming from?

Producers don’t make them. They furnish them with the material and publicity men beat the drums that attract attention to them. But, in the final analysis, stars are made by paying fans. No ticket buyers, no star. It’s almost as simple as that. A beautiful face, an attractive appearance, were almost enough as requisites in the old silent days. I’m not unmindful of the brilliant talents and extraordinary drawing power of some of the stars of those days.

But it does seem to me that standards have risen sharply since the advent of the talkies. Part of this is due to the more discerning and critical public. Some of it is the result of changes in mechanical devices and the improved technique employed by directors and cameramen. In order to look good today, it is essential that you be good. And that brings me to the point of this article. Where are the good actors of tomorrow to come from? Where are they to secure the vital experience?

Hollywood cannot draft as lavishly as formerly from the legitimate and vaudeville stages. Today, a beginner in the theater is drafted for the screen before he has had sufficient opportunity to develop. He, or she, arrives in Hollywood full of high hopes and dreams which collapse at option time, like soap bubbles.

Some of them return to the theater and come back the hard way. Most of them, afraid to face their friends back home, stay on and drift into oblivion. Many of these youngsters are fine as possibilities but lack experience and polish.

Producers are finding it increasingly difficult to find good actors for important roles. They may be able in this age to perform many wonders. They can make steering wheels out of beans, stockings out of coal, sweaters out of milk. But no one has yet discovered how to make motion pictures without actors. And more important, good pictures without good actors.

No one can accuse the producers of not trying. Hundreds of new actors are tried out each year, yet fewer and fewer faces remain on the screen. As one very prominent star recently pointed out to me, the average age of the current top-flight stars is around 30. There is a dearth of good young actors.

I know of no panacea. I doubt if anyone has one. But I have raised the question, and I should like to offer a suggestion. I propose that the Will Hays organization, the Screen Actors Guild, the Academy of Motion Picture Arts and Sciences, or some such representative group, organize an institution devoted to the instruction and development of young, talented people.

Let this college be staffed with a faculty of directors, actors and good coaches. The institution would have to be supported for awhile, possibly by producing companies. But this would be only for a short time. When some of the prospects are considered ripe, let the producers bid for them, following the method that obtains in baseball.

The accruing funds should go to the institution to enlarge the facilities, defray the costs and furnish financial assistance to worthy students unable to pay their own way.

From such an undertaking, many good players, thoroughly grounded in the technique and craftsmanship of motion pictures, might be developed. From among these a better percentage than now might climb to places in the star ranks.

It’s just a thought. But it seems to me to have considerable merit. Certainly, it would be a surer and safer method than depending upon some stagehand to fish one out of water. — originally published Dec. 31, 1940. 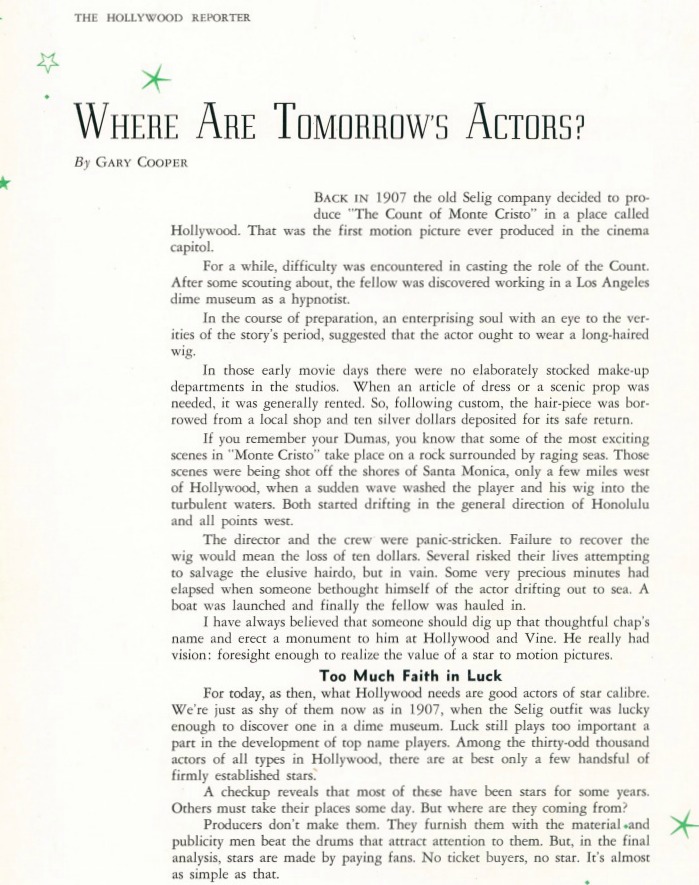