After a brief foray into historical legend with King Arthur and Disney musicals with Aladdin, writer-director Guy Ritchie returns to the genre he’s known best for with the snazzy crime caper The Gentlemen, which is set to bow Friday.

Matthew McConaughey stars as Mickey, a highly successful drug dealer in London who’s looking to get out of the game and sell his empire to his trusted assistant Raymond (Charlie Hunnam). That campaign has garnered the attention of a crooked detective named Fletcher (Hugh Grant), who is investigating Mickey’s operations and his connections to the aristocracy. Of course, that involves all sorts of murder and violence, couched in Ritchie’s highly stylized comedic style.

STX has been selling the film as a violence-filled comedy that’s very on-brand for Ritchie, one where the veneer of polite society masks the seedy underbelly of the drug-selling underworld. The pic clocks in at a 76 percent “fresh” rating on Rotten Tomatoes so far. The following is a look at the marketing campaign.

A small handgun made of ice sits in a glass of whiskey on the first poster (by marketing agency BOND) from October, helping to establish the movie as being about a high class of violent criminal. That’s reinforced by the “Criminal. Class.” copy at the bottom, while the rest of the poster is all about showcasing the big names in the cast.

Each character got their own poster (by marketing agency Concept Arts) in a series released in November, though there isn’t anything additional about them or deeper information on who they are. Another series of posters (by BOND) covers the same basic ground but puts an ornate frame around the photos.

The theatrical poster doesn’t offer much more, just bringing all the characters together on the same image. It’s seeking to sell the movie based on the star power of the cast as well as Ritchie’s name recognition.

Early October saw the release of the first trailer (6 million views on YouTube), which centers on a conversation between Fletcher and Raymond. That conversation serves as a nice little recap of the events of the story, allowing for footage to be shown that coincides with the story he’s telling. There are double-crosses and threats thrown in various directions, all of which adds up to just the kind of high-end gangster flick Ritchie is known for.

About a month later, the studio compiled footage from various fan videos to show how they reacted to the trailer.

A second trailer (393,000 views on YouTube) came out in late December and features a lot of the same footage. One thing that’s made more clear here is the rivalry between Mickey and Dry Eye (Henry Golding), an ambitious young criminal eager to take over Mickey’s operation, with the older drug dealer not eager to cede the stage to the upstart. 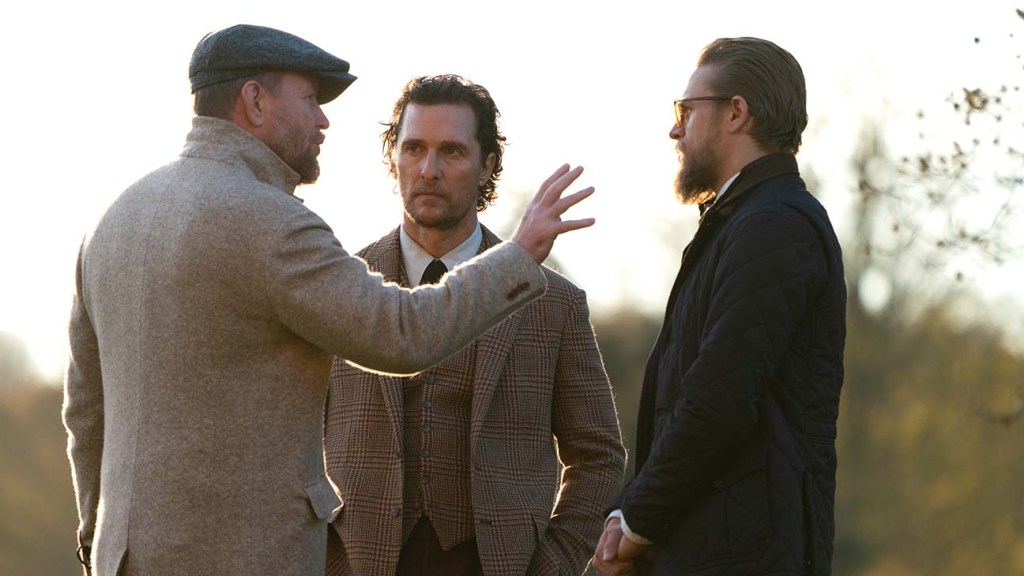 At the Cannes Film Festival in 2018, Miramax stepped up to acquire the movie and provide financing. It then changed hands in February 2019 when STX bought it and changed the name from Toff Guys to Bush.

It then received another name change to its current moniker, an update revealed when it was part of the studio’s CinemaCon presentation, which included some of the cast as well as studio heads who promised it was a return by Ritchie to the director’s crime roots.

A clip released in late December had Mickey pitching Matthew (Jeremy Strong) on the “gold rush” that is weed and the need for his criminal empire to have a new leader with a less tarnished reputation.

Digital video ads and TV commercials began running in early January, with spots that reinforced the messages conveyed by the trailers that the movie was a violent good time with fast-talking criminals and the morally compromised individuals around them.

Online ads placed around the web at about the same time used elements of the key art, particularly the photos of the assembled cast.

Promotional partners for the film include:

? Flaviar, which released a limited-edition, movie-themed single-malt whiskey. The company also gave away tickets to exclusive screenings in New York and Los Angeles earlier this week.

? Eaze, which created a special movie-inspired menu of its cannabis items for people to try out, with those who do entered to win a screening of the pic for themselves and 20 of their friends.

? Indochino, which ran a contest in conjunction with Flaviar awarding prizes to those who shared their sharpest, most stylish pics on social media using the #Gentlemening hashtag to enter.

McConaughey also made an appearance at a recent UFC match, which seems to be not only a move to get that sport’s audience interested in the film but also a nod to how the look of Hunnam’s character appears to be inspired by MMA star Conor McGregor. 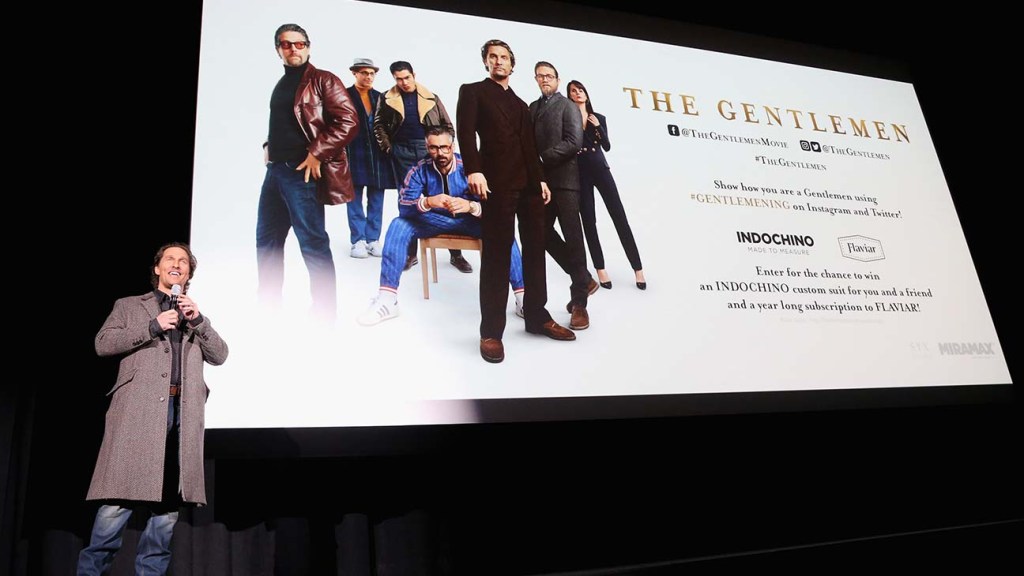 If viewers were familiar at all with Guy Ritchie but didn’t know this movie came from him, they might likely be able to quickly identify it as the director’s work. The humor, the criminal underworld setting, the gratuitous violence … it’s all reminiscent of his most well-known efforts, including Lock, Stock and Two Smoking Barrels.

It’s also interesting that the style of the movie seems to be so relevant to today’s audience. Attractive men with beards wearing turtleneck sweaters and tweed jackets appear “in” at the moment, and the campaign makes sure to call that out as a primary reason to see the film. That message is reinforced by the promotional partnerships, which are primarily related to liquor, recreational cannabis and male fashion.

All of that creates a campaign that’s extremely strong when it comes to being on-message and on-brand, even if it doesn’t emphasize spectacle.