When is the right time to see a film about a series of natural disasters destroying the planet? There may never be a “right time” for audiences to want to see Geostorm, the new film directed by Independence Day producer Dean Devlin, starring Gerard Butler, Abbie Cornish, Ed Harris and Andy Garcia. However, it is hard to imagine that this specific time — merely weeks after the devastating one-two-three punch of Hurricanes Harvey, Irma and Maria, and just a few days after the wildfires that ravaged Northern California — is anywhere near the right time. (The $120 million film is expected to make just $10-12 million in its opening weekend.)

One of the most niggling aspects of the release of Geostorm is the sense that its distributor, Warner Bros. Pictures, is fully aware of the unavoidable sense that this film is the feature-length embodiment of “too soon.” The film was originally slated to be released on March 25, 2016, before being pushed back a few months, and eventually more than a year, due to low test scores and extensive reshoots. Even for live-action fare, reshoots can be common; however, they rarely entail hiring a different producer, a different writer and a different director: Jerry Bruckheimer, Laeta Kalogridis and Danny Cannon, respectively.

The film’s release date was eventually pushed back to this weekend, three years after the first day of filming. That shift, plus the detailed, multi-million-dollar reshoots, would all be fairly ominous signs on their own. Add to that an absence of advance screenings for critics as well as almost no Thursday-night screenings at American multiplexes, which are now the norm for most big-budget studio fare. If Geostorm is anything other than a disaster unto itself, its studio isn’t acting like it.

Knowing that Geostorm wasn’t originally going to be released in the fall, even if you ignore Warner Bros.’ avoidance of advance critical buzz, it’s possible that the film could just be the victim of horrendous timing. But Devlin, making his directorial debut with Geostorm (even if Cannon may have had a hand in the reshot sections of the film), could have arguably guessed that timing wouldn’t be an issue. For the first chunk of his producing career, Dean Devlin worked with director Roland Emmerich, whose efforts include Independence Day, Godzilla, and the 2004 epic The Day After Tomorrow, which depicts a series of natural disasters ravaging Earth. (Coincidentally or not, The Day After Tomorrow is an Emmerich film that Devlin did not produce.)

The Day After Tomorrow, starring Jake Gyllenhaal, Dennis Quaid, and Emmy Rossum, does not shy away from political commentary: one of its antagonistic characters is the vice president, clearly modeled on then-VP Dick Cheney. Nor does The Day After Tomorrow shy away from depicting worst-case-scenario weather events killing countless people. Most importantly, in spite of mixed reviews, the film performed exceedingly well at the box office, grossing over $500 million worldwide in the summer of 2004. 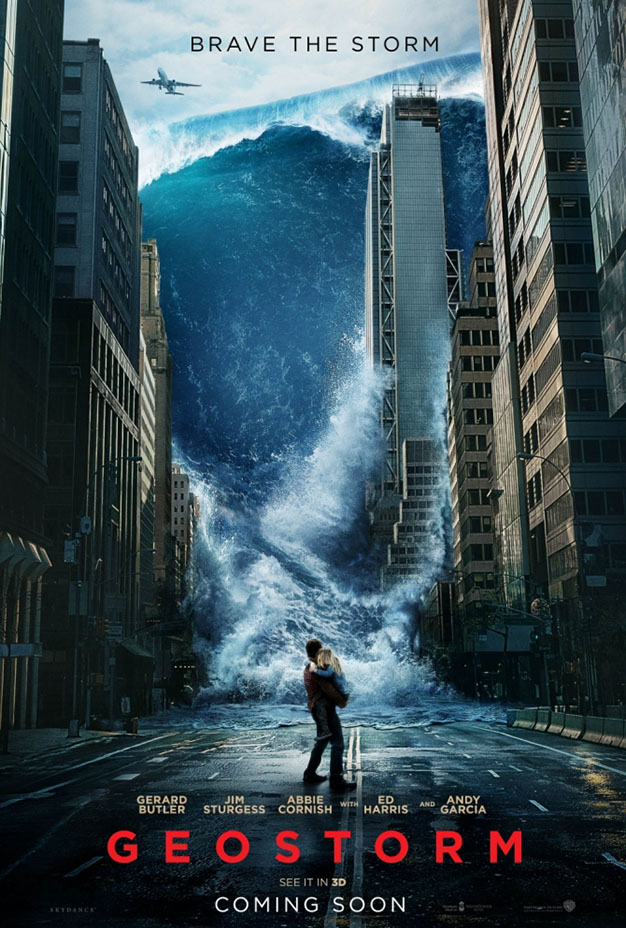 There is seemingly no end to the number of natural disasters that befall the world in real life; it’s not as if The Day After Tomorrow posited a series of events that were so outrageous and impossible because none had ever happened. Then, as now, the genuine specter of climate change hovered over the proceedings. What’s more, this October has, unlike September, not been quite as dominated at the box office by a single film. Where Warner Bros.’ It performed exceedingly well after Labor Day, nothing this month has been nearly so popular. (Other new releases like The Snowman and Boo 2! A Madea Halloween may do decently this weekend, but neither is expected to be as wild of a breakout hit.)

The competition at the box office may not be fierce, but a movie like Geostorm has the misfortune of appearing in a year lined with heartbreak and tragedy. Though audiences have not shied away from darker fare this year — It isn’t exactly upbeat — there’s something almost off-putting even in the marketing materials for Geostorm. The images of Texas and Florida and Puerto Rico being underwater thanks to devastating hurricanes throws into sharp relief how frivolous disaster epics like Geostorm are.

Emmerich’s breakout hit was another disaster epic, 1996’s Independence Day. The visual of an alien spaceship decimating the White House was both perversely thrilling and haunting, in part because as visceral as the explosion was, it still felt unreal. Even on a poster, the image in Geostorm of a flood threatening to destroy a city block feels only haunting, if not also more than a bit misguided. Why would anyone want to watch a movie about the world’s climate taking out humankind when we can feel just as helpless and see the same thing by turning on The Weather Channel?