A year after the next generation of Ghostbusters burst onto the scene, Abby, Patty and the rest of the new crew have returned, in comic book form.

The all-female team featured in the 2016 film from director Paul Feig was divisive online. It not only attracted a fan base happy to see a new generation, but also brought out a vocal minority of online trolls who made the Ghostbuster‘s trailer the most disliked in YouTube history, likely contributing to the film’s poor box-office returns that all but sinked its chances for a sequel.

But fortunately for fans of the team, there’s now IDW’s Ghostbusters: Answer the Call. The five-issue miniseries picks up where Feig’s movie left off and brings the newest team of ghoul hunters face-to-face with a demon who can conjure up their worst fears.

There was such a strong embrace of the new Ghostbusters online, but their “canonical” adventures extend to just one movie to date. How did those two things impact how you approached the book? Was there a freedom in telling the second story, or were you aware of the fandom surrounding Abby, Erin, Patty and Holtzmann? Especially Holtzmann, let’s be honest.

Kelly Thompson: As much as I want more “Answer the Call” Ghostbusters movies — as many as Hollywood will give me — there only being one film so far is great fun for us in the comics because we have a huge field, limitless possibilities to play with. And the excitement and devotion of the fans, they really make the whole thing possible. There’s a demand and passion for these characters — to see their stories continue even in other mediums — and while that puts pressure on us to get it right, it’s also wonderful energy to tap into. And yes, the Holtzmann energy is particularly intoxicating, as it should be!

Were there temptations to reference the “other” Ghostbusters and the history of the franchise, this time around?

Corin Howell: Plenty of temptations I can honestly say, though instead of putting them out in the open, I tend to sneak them in the background.

Thompson: There are a few references to “other” Ghostbusters in our story, but not a lot. I’m not opposed to references and callbacks, but there’s so much to explore with these characters, it’s just not the priority. Plus Corin does a great job of dropping in some really fun “Easter eggs” that die-hard fans will appreciate.

Howell: There are a few Easter eggs in the first issue but I’m not going to spoil anything.

Corin, I’ve been following along your Twitter and have seen the panels you’ve teased as works in progress, and it’s clear you’re a fan of the franchise — who else would get so excited about drawing the car? What’s been the most surprising thing about working on these characters, from the perspective of a fan?

Howell: That I have the freedom to draw them in my own way, specifically adding silly expressions and antics that I don’t get a chance to normally do, especially when I was working on the Ghostbusters: International covers. With the girls, I can really play with their personalities and pull them out when I’m drawing a page. It’s a lot of fun to draw them just being themselves.

Kelly, you’ve worked on licensed material including Jem and the Holograms, Marvel’s Hawkeye and Star Wars, in addition to this. How does Ghostbusters compare in terms of getting into the right mind-set to tell everyone what happened next?

Thompson: One of the secret tricks of working on larger-than-life properties like Ghostbusters is to just go into complete denial and pretend it’s no big deal. In my experience it’s one of those things, where if you think about the larger picture, what it means or what’s at stake, it can really paralyze you. Instead you have to just dig in and do the work. For me, cracking something like this is always about finding the voice for the characters. If you can find that, all else will fall into place…eventually. 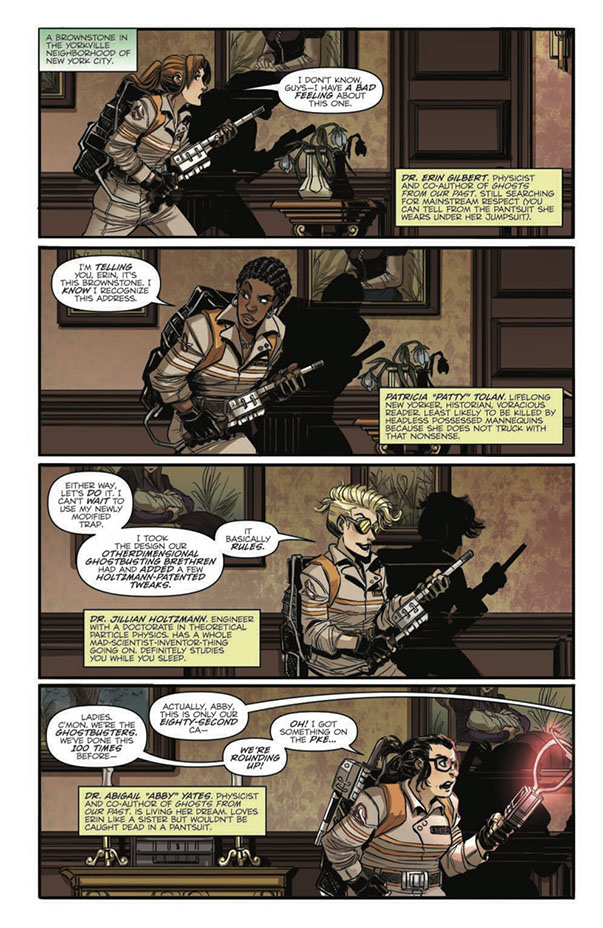 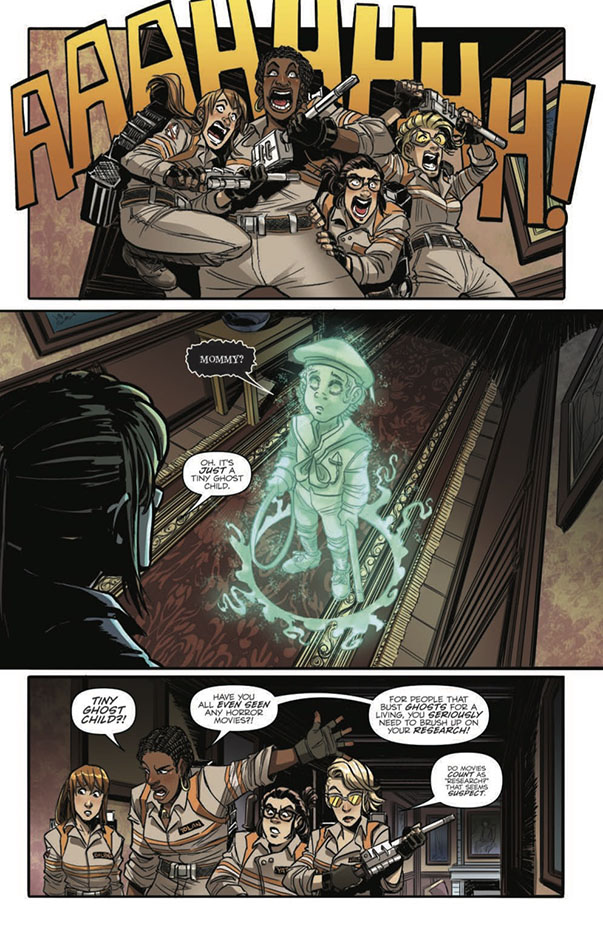 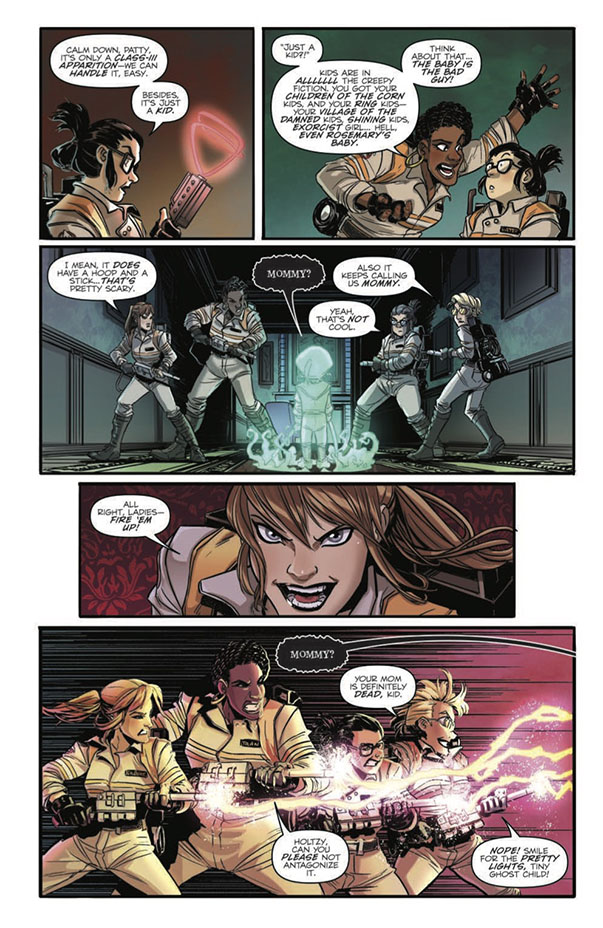 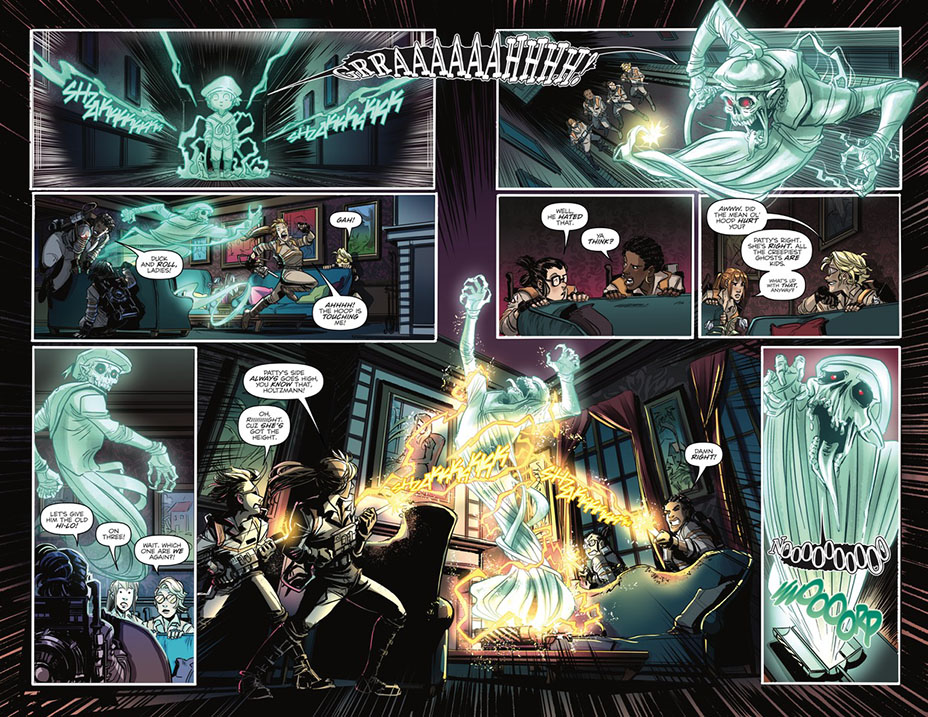 Ghostbusters: Answer the Call No. 1 is in comic book stores and available digitally now.