Continue to The Hollywood Reporter SKIP AD
You will be redirected back to your article in seconds
Skip to main content
March 19, 2018 12:20pm
Logo text

Something very strange is happening in Gideon Falls.

Gideon Falls launched earlier this month to introduce readers to what Image Comics calls a mix of “rural mystery and urban horror,” as a Catholic priest arrived in a small town to a suitably unsettling welcome that included ghosts, a mysterious Black Barn and the discovery of a dead body — while, in another city, a young recluse searches for the truth via other people’s trash. The new series reunites the critically acclaimed creative team of Jeff Lemire and Andrea Sorrentino.

Gideon Falls adds to Lemire’s busy schedule — he’s also writing The Terrifics for DC, Black Hammer for Dark Horse and Bloodshot Salvation for Valiant, with a new Marvel series The Sentry launching later this year. It also continues his partnership with Sorrentino, with the two continuing to push at the edges of the medium with the new series. Ahead of its second issue, Heat Vision talked to the writer about the series, with an exclusive preview of the next release below.

Gideon Falls feels unlike a lot of horror stories in comics because it shies away from shock and gross-out spectacle and is, instead, genuinely creepy. The first issue was wonderfully unsettling in a way that called to mind many cinematic forerunners, without feeling beholden to any particular influence, which leads me to ask: Where does Gideon Falls come from? Am I completely wrong in seeing Twin Peaks in there?

I have never been a big horror fan myself, and that is mostly because I do not enjoy gore at all. I get no sort of excitement from gore — generally it just revolts me. But I do love more psychological, character-driven horror and films that can create a rich, underlying feeling of building dread. So in terms of influences, yes Twin Peaks is probably the biggest one. I am a massive fan of Twin Peaks and have been since it first aired in 1990. It made a huge impact on me and continues to. When I started Gideon Falls, Twin Peaks season three had not yet started to air, so while there was a lot of anticipation on my part; I had not yet seen it.

I think Stanley Kubrick’s The Shining and the first season of True Detective are also influences as well. But this story also comes from a lot of personal stuff, especially my mindset and struggles when I was younger.

The series is the story of two men who are on different, but parallel paths: Father Fred, a priest who’s just moved to Gideon Falls under mild duress to replace a deceased predecessor who might be hanging around as a ghost; and Norton, who may be sick or may, simply, know things that others haven’t realized yet and who seems to be finding meaning in trash around a city environment. Both feel like insular actors, as opposed to the action heroes popular in comic books for obvious visual reasons.

I don’t think I consciously set out to sidestep any traditions or tropes. These are just two characters that I fell in love with and felt compelled to write. I’ve always enjoyed writing from an outsider’s point of view and Norton is the ultimate outsider. And in Fred there is a chance to create a richly layered character who has a complicated relationship with his own faith. Psychologically, there is a lot to work with in both characters for both Andrea and I and their stories drive the narrative, rather than creating a high-concept horror story and having the characters simply be there to react to things.

This is the third project the two of you have done together, by my count, and in the best way, it feels like it: There’s a simpatico between the two of you at this point — you can see it grow from DC’s Green Arrow through Marvel’s Old Man Logan — but there’s also a sense of forward motion here: a shared tendency to understate that feels fresh, and a sign of shared trust. This feels like something that only you two could do together. What’s the working relationship between the two of you like at this point?

Andrea and I have continued to mesh and grow together across our three projects, and I think Gideon Falls is the culmination of the previous five years of work. We have a definite chemistry. I think my stories allow him the freedom to explore and experiment visually, and his layouts and then his inventive storytelling always open new avenues and ideas for me. So there is a back-and-forth that is constant. It’s really an unspoken thing. We just trust each other and get each other and it works. There is very little back-and-forth.

The debut issue got a lot of positive reviews and excitement building around it. Was the response a relief, or is this such a passion project that it’s full-steam-ahead no matter what?

It is a huge relief when things that you have been working on privately for quite a while go out into the world and people respond to it. Though I must confess I always know that I am in good hands with Andrea. His work is so good and so interesting and so unique that I felt confident we had something special here.

Talk about the second issue, to accompany the preview images below. Readers who picked up the first issue know about the Black Barn, but what does the second issue do to deepen — or unpack — the mysteries of Gideon Falls?

The relationships between both Norton and Doctor Xu and, in Gideon Falls, between Fred and Sheriff Miller deepen in Issue 2. And through these relationships, the overall mystery also begins to deepen. The Black Barn itself begins to take a more tangible role in their lives as well. Issue 2 really sets the story off and things start rolling. 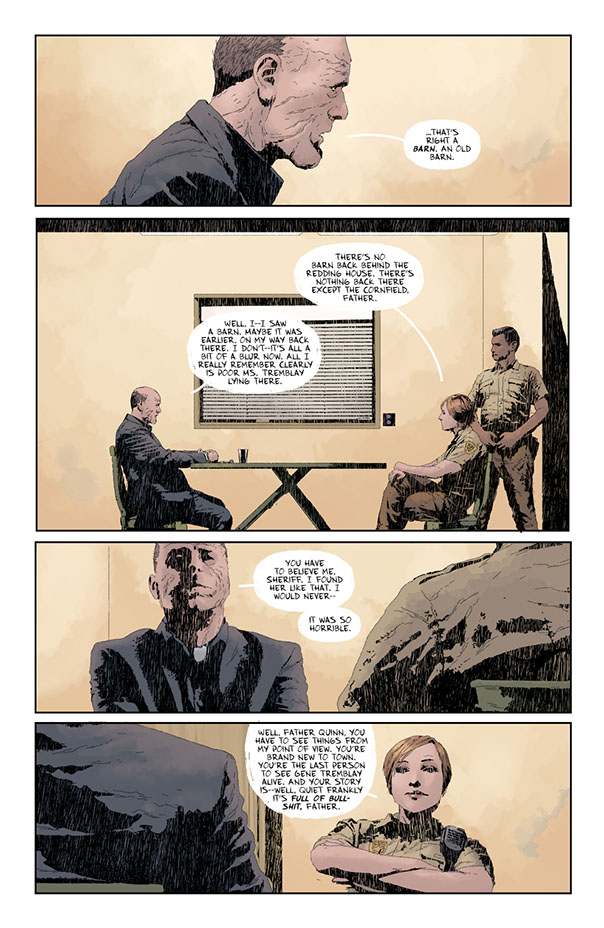 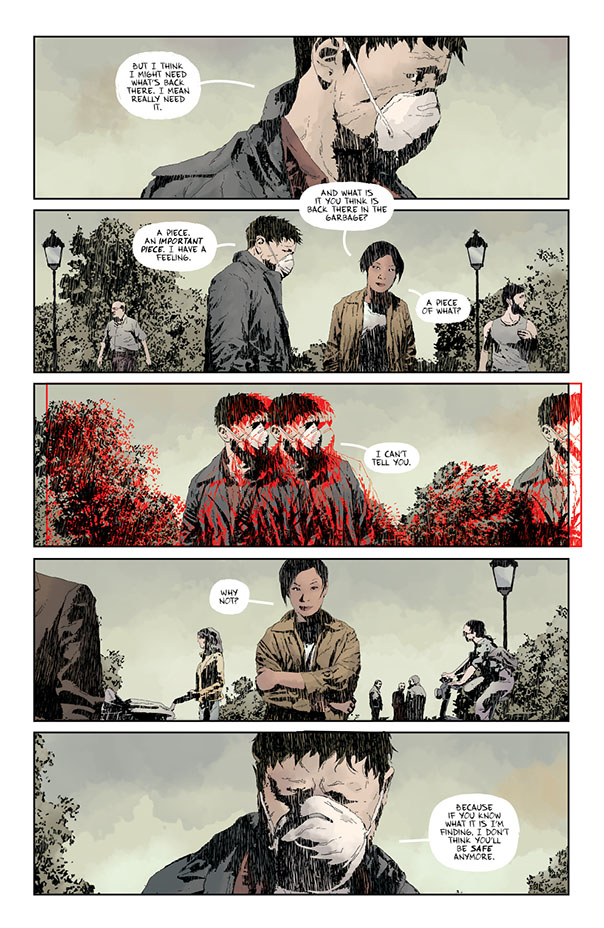 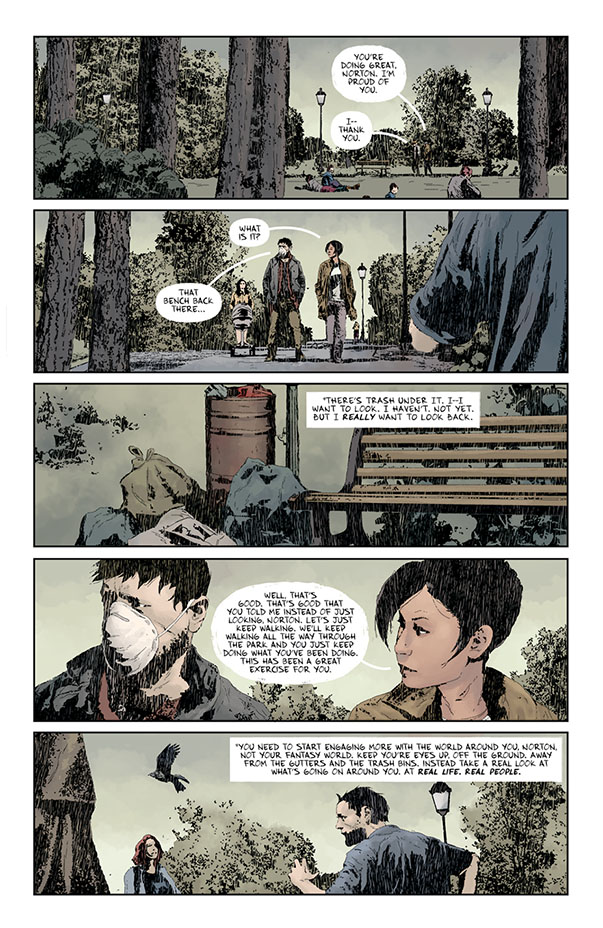 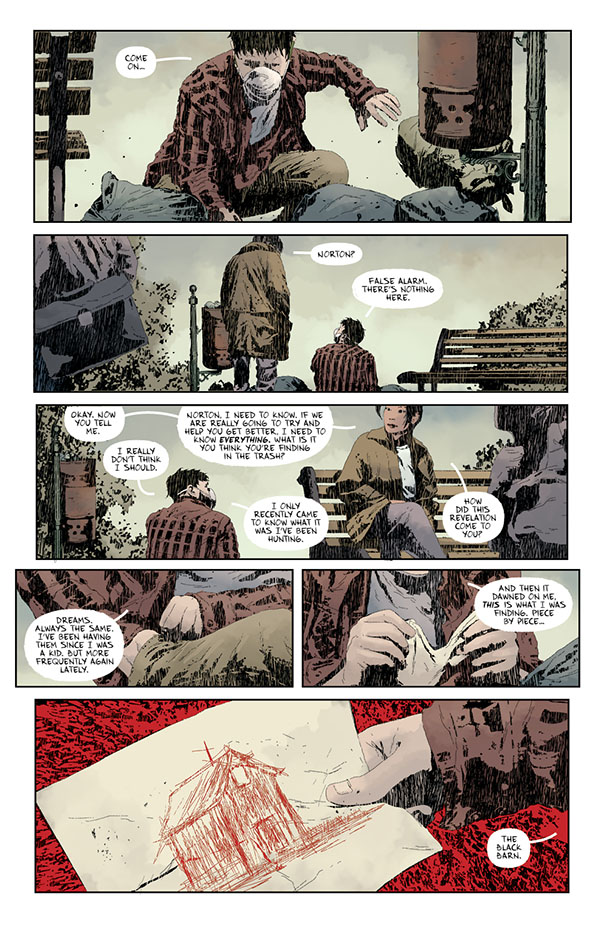 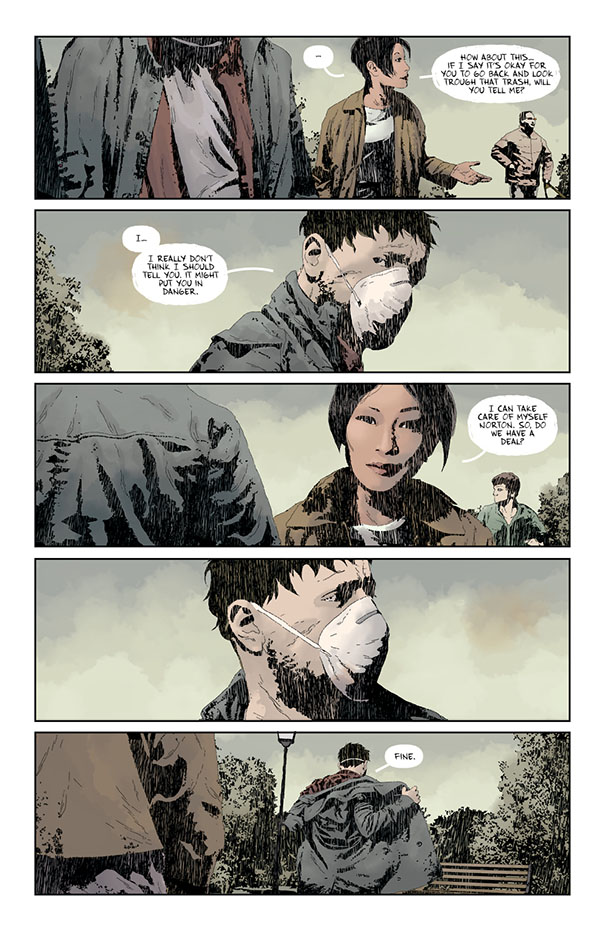 Gideon Falls No. 2 will be released April 11 in comic stores and digitally. The first issue is currently available.