Two years ago writer/director M. Night Shyamalan came back to the forefront of the cultural conversation with the thriller Split, starring James McAvoy. To the surprise of everyone, the movie was revealed to be connected to another Shyamalan picture, 2000’s Unbreakable. Now the characters from both films — McAvoy’s fractured Kevin, Bruce Willis’ David Dunn and Samuel L. Jackson’s Mr. Glass — all come together in this week’s Glass.

The story brings all three together in a psychiatric hospital where each is being treated by Dr. Ellie Staple (Sarah Paulson), who wants to explore the idea that some people believe they have special abilities. Mr. Glass has plans of his own for Kevin, including having Dunn chase him down in a way that lets the general public know that extraordinary individuals walk among them.

Based on the popularity of Split and the renewed buzz around Shyamalan, the movie is tracking for an opening of about $60 million to $70 million, which would allow it to easily win the weekend and provide Universal with a sizable January release. The film received mixed reviews and stands at 40 percent on aggregator Rotten Tomatoes. Here’s how the studio marketed the film.

The first poster, released by Shyamalan in early July, shows the three main characters. At the top we see only their legs as they sit but their reflections in the polished floor — presumably that of an institution of some sort — show them more fully, communicating to the audience that everyone’s getting together here.

Shortly after that, a special poster was offered at San Diego Comic-Con featuring the artwork of legendary artist Alex Ross. Using the motif of a shattered pane of glass, the fragments show all the main characters, including a handful of Kevin’s personalities as well as some of the comic book art Mr. Glass is continually fascinated by. Copy at the bottom offers the wisdom, “You cannot contain what you are.”

The final theatrical one-sheet from November again features all three main characters, this time presented in individual segments of a shattered pane of glass, with Kevin taking up three of the five segments at the top while Mr. Glass and David flank him on either side. The hospital they are all confined to for part of the story is at the bottom, so the audience gets the message that at least some of the action will take place there.

IMAX offered exclusive artwork that continued the equal focus on the three characters, casting each in its own color light, just like what’s seen on the first poster and on publicity stills.

The first trailer (15 million views on YouTube) debuted at Comic-Con in July of last year and starts out with Dr. Staple explaining she has assembled Kevin, David and Elijah because she studies those who believe they have superpowers. We see brief backstories and explanations as to who each one is but don’t get much in the way of story. It’s not clear who is a good guy and who’s a bad guy, just that they’ve all come together for a reason that could have profound effects on the world.

That trailer had been teased to audiences in the days before it was released with a series of introductory videos focusing on Mr. Glass, David and The Beast to make sure everyone knew that this new movie would connect the dots between Unbreakable and Split.

October’s second trailer (5.7 million views on YouTube) starts off showing how Elijah is kept heavily sedated in his hospital room so he doesn’t cause trouble. But the arrival of David and Kevin stirs him from his slumber. He realizes that unleashing the Beast within Kevin may be his best chance for escape and does so in order to “show the world” that extraordinary people really do exist. Specifically, he wants to prompt David to get out there and show the world what he’s capable of, using the threat of the chaos and death the Beast will cause to spur him to action. 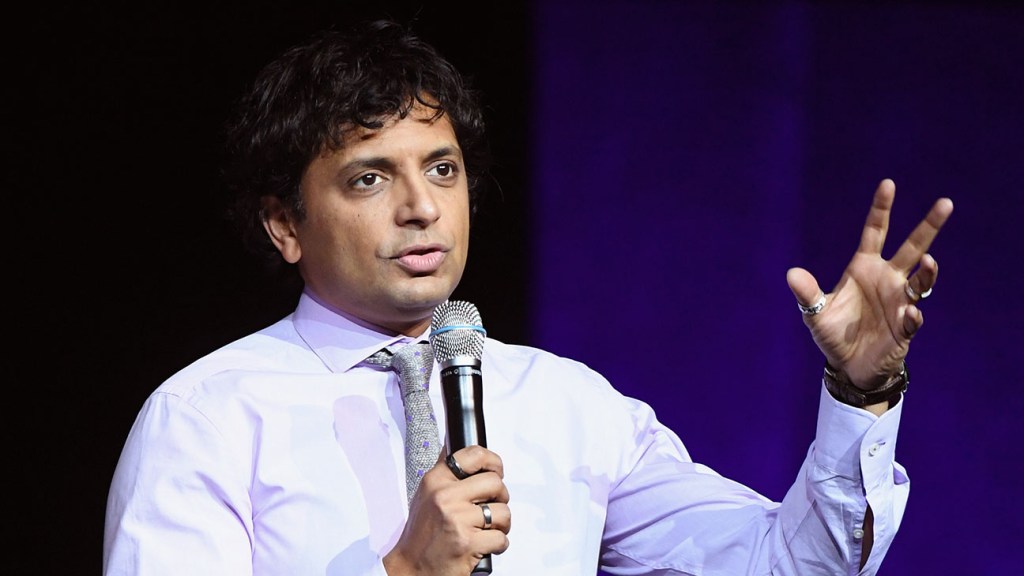 Arguably, the movie’s publicity campaign started the moment Shyamalan announced it was being made and that it was connected to both Unbreakable and Split. Things really kicked off, though, when the director and members of the cast showed up to present the movie as part of Universal’s overall slate at CinemaCon. It was also announced as one of the movies Blumhouse planned to bring to San Diego Comic-Con in 2018, with the cast and director appearing there to get fans excited and promise to fulfill their expectations.

An extended TV spot from mid-November focused on the superhero elements of the story, selling it less as a mystery uncovering strange people and abilities and more as … well … a superhero story with lots of action and similar world-shattering stakes.

The studio created animated stickers promoting the movie for Instagram, Snapchat and Giphy. Outdoor ads put all three characters together or featured each one individually while online ads used various elements from the key art to drive people to purchase tickets. Paid posts on social networks worked toward similar ends using the trailer or other videos.

The Alamo Drafthouse offered a triple feature of all three films in this extended story — Unbreakable, Split and Glass — at locations around the country, including a simulcast video conversation with the writer/director. A similar screening of the three movies was arranged by Paramount at the Egyptian Theater in Los Angeles in partnership with Beyond Fest and American Cinematheque.

An exclusive clip released just last week showed Mr. Glass trying to unleash The Beast that lies within Kevin. Another shows Mr. Glass explaining to Kevin what he’s trying to do, prompting him to use his abilities to save lives, something that comes into focus in a third clip that shows Kevin being attacked by The Beast.

IMAX created an exclusive featurette with Shyamalan talking about how excited he was to see a project he’s so enthusiastic about on the biggest of screens. The cast and crew all appeared in another featurette that had them talking about the motivations powering the various characters and informing the story. 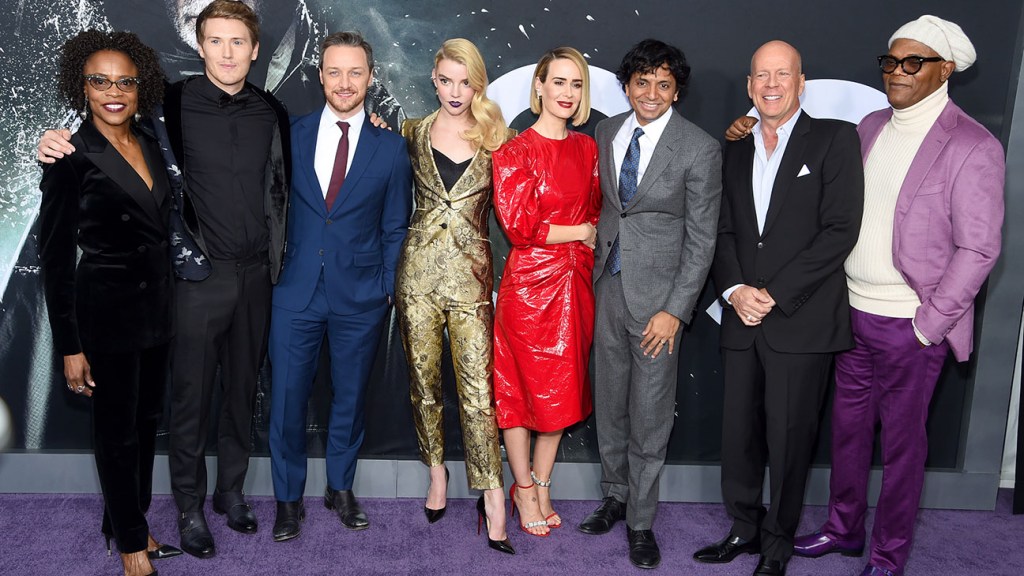 Universal has presented Glass as the culmination of a long-gestating story, almost like what Marvel Studios did last year in the campaign for Avengers: Infinity War. The stakes may be lower — half the world’s population isn’t at risk of disappearing — but it’s no less a story of characters coming together because of dramatic circumstances.

In most all aspects of the campaign there’s the theme of the three main characters being apart, each shown in their own light or in their own segment of glass, while also being together in the same image or frame. That certainly seems to have captured the audience’s imagination, hence the expectation of a successful opening weekend, even as Shyamalan has promised this is the end of the story for this particular shared universe.