After nearly a decade, the God of War franchise is returning to Playstation with a new entry in the bestselling action-adventure game series.

Showing off roughly the first three hours of the new installment, Santa Monica Studios invited a small group of journalists and gaming insiders to get their hands on the upcoming game and explore the revamped gameplay, beautiful new tableau of ancient Norse lands and the familial relationship at the core of the story that will be released next month.

Fans of the franchise will recognize a number of small nods to the original series right from the start, but similarities between 2018’s God of War and the series’ original trilogy and subsequent breakouts are few, as director Cory Barlog and his team have entirely reinvented and overhauled the gameplay and design for this latest adventure.

The central figure in the game, as with all previous iterations, is Kratos, a former Spartan warrior fooled into killing his wife and daughter by the Greek god of war, Ares. The original game, first released in 2005, was an instant hit and quickly cemented its Grecian protagonist as one of the most recognizable characters in gaming, due in large part to his unflinching brutality and relentless pursuit of vengeance.

While earlier iterations of the character portrayed a stoic, merciless warrior whose seemingly unkempt rage was simply a veneer hiding the deep sorrow that was the root of his drive, 2018’s Kratos offers a more complex, multi-faceted examination of both the changes that parenthood plays on an individual and the softening of rigid codes of conduct to allow light through the cracks of a stony exterior.

The game’s script is exquisite, following a school of show-not-tell that is rarely seen in video games. Much of the emotion and pathos in the game is made possible by current high-powered game engines, allowing developers and designers to render a level of realism never before possible through polygonal characters. However impressive the visuals in the game are, they are only highlighted all the more by the stellar performances of the game’s two main actors, Christopher Judge and Sunny Suljic as Kratos and his son Atreus, respectively.

The introduction of a child in Kratos‘ life adds a dynamic to the series that’s impact cannot be understated. While prior installments derived much of their entertainment from Kratos‘ lone-wolf mentality, the new game introduces a bond that, once experienced, makes the player question how the series existed without it. Atreus is not a character whom the player must look out for, constantly finding himself in need of saving, but rather, on the rare occurrence where Kratos must rescue his son from the clutches of an undead draugr, the urge to put aside any current task to save your kin from an unthinkable fate is overwhelming, and it is a testament to both the actors’ portrayals and the level of emotional connection the game manages to make between player and character. 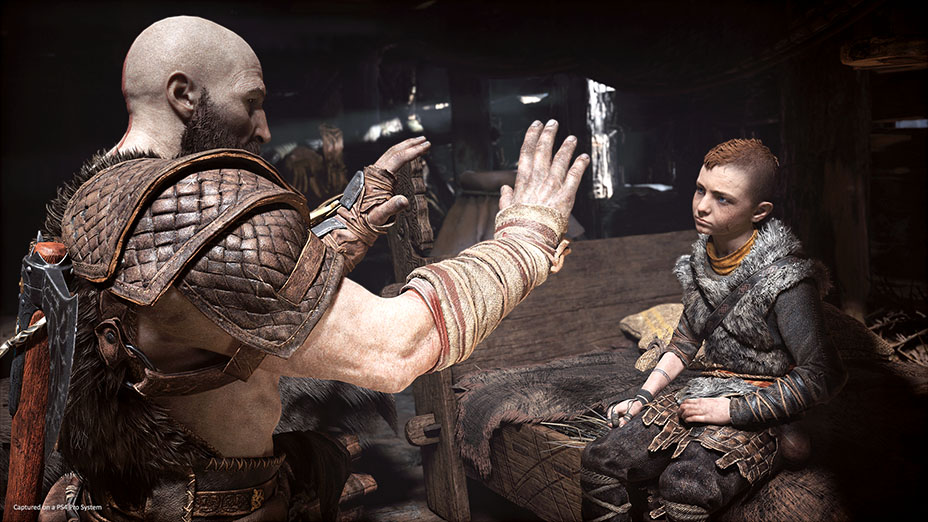 What God of War manages to accomplish is a level of immersion rarely felt in games. Every moment of the demo was seamless, transitioning from unplayable cut scenes to frantic battles to exploratory puzzle sections without a single frame lagging or graphical hiccup. The textures in the game, from Kratos‘ lush beard to decaying bark and dripping icicles, is so beautifully and consistently rendered that reveling at the northern, snow-covered landscapes is as satisfying as flinging your magical axe into the side of a towering, murderous troll.

A wholly revamped camera system, which places the lens just off the back of the playable Kratos, makes combat visceral and makes for dynamic gameplay challenges. The controls are tight and improvement is steady and rewarding. The weight of Kratos‘ axe, replacing his iconic Blades of Chaos weapons from previous games, is appropriately meaty as it slashes and crunches through enemies. Adopting collectible, crafting and leveling systems, the game also allows you to customize Kratos in a way that is entirely new to the series.

As technology continues to push the threshold of what can be rendered in game engines, the line continues to blur between the cinematic and gaming experience, and no game to date has mastered that grand, epic feeling of the big screen quite like God of War.

Barlog, who served as lead animator on the original God of War and director of God of War II and the initial stage of God of War III, returned to Santa Monica Studios in 2013 after being much-sought-after by studio head Shannon Studsill. In his return, he has crafted the most appropriate next step in the series, a game that has aged along with its players.

Undoubtedly set to earn a Mature rating from the ESRB, as did its predecessors, God of War is less likely to appeal to mature audiences because of its violence and brutality (both of which are toned down from the original over-the-top, bloodstained titles) but more for its handling of complex themes, its adult approach to fatherhood and its willingness to reinvent and show new sides to a character with such rich, deep layers that were never before explored.

God of War will be available April 20.