[This story contains spoilers for Godzilla: The King of the Monsters]

“Sometimes the only way to heal our wounds is to make peace with the demons who created them,” Dr. Ishiro Serizawa (Ken Watanabe) says in Godzilla: King of the Monsters. The latest American addition to the long-running Godzilla saga provides kaiju battles aplenty, while evoking the big-hearted spirt of a 1990s summer blockbuster. But Michael Dougherty’s film, like Gareth Edwards’ before him, is more than CG creature spectacle and destruction porn. Godzilla within the Monsterverse has taken on environmental and religious significance in a way that highlights the contemporary concerns that come with a global uneasiness with our rapidly changing world.

Godzilla: King of the Monsters presents a scenario in which humans are not only tasked to make peace with the Titans who have stomped out city blocks and untold lives, but also to make peace with themselves and environmental devastation with which they have scarred the world and attracted monsters.

Ghidorah, or Monster Zero, takes on an even greater significance in the film than just Godzilla’s archnemesis in that he represents a break from nature, chaos created by a fallen alien. Dr. Ilene Chen (Ziyi Zhang) elaborates on Ghidorah’s origins and his place within our art and mythology, represented by Chinese dragons, Greek hydras, and William Blake’s painting The Great Red Dragon and the Woman Clothed in Sun. Ghidorah is the serpent that has inserted himself in our art and stories for millennia, essentially becoming part of us — the devil on our shoulder.

There’s a shot in the second act of the film where Ghidorah towers above a volcano, wings outstretched, behind a large cross in foreground. Ghidorah’s position in the background suggests a religion preceding Christianity and he is rising up to reclaim his religious dominance. Of course, Ghidorah’s is a false claim. But the ancient religion in which Titans were considered humanity’s gods is confirmed true within the world of the film. In an age where faith is arguably met with more skepticism than ever, and perhaps our biggest fears rest on the idea that our belief system is wrong, there’s something rewarding about King of the Monsters’ nonsecular theist approach through gods so big humanity has no choice but to believe in them and find some semblance of peace in their existence and influence. This idea of peace-making has existed within Godzilla films since the beginning. 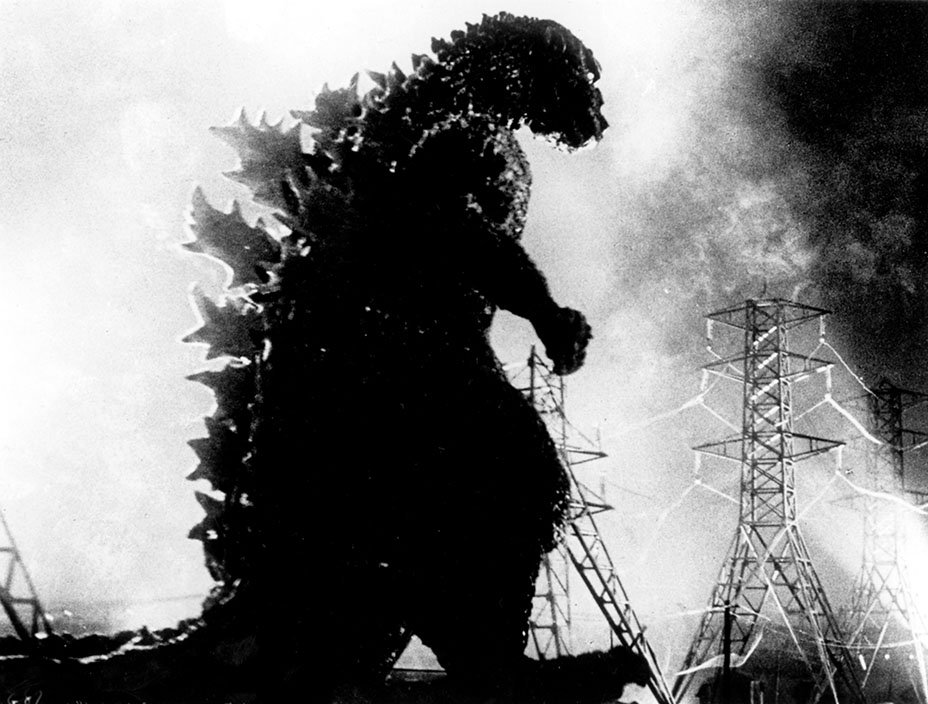 Godzilla has always existed at the intersection of science and myth. His nuclear existence is the result of human cruelty and irresponsibility manifested as an allegory for the atomic bombings of Hiroshima and Nagasaki. His existence is inextricably Japanese, part of a cultural heritage that no other country can ever truly possess in the same way. In his essay “Poetry After the A-Bomb,” included in the Criterion release of Ishiro Honda’s Gojira (1954), J. Hoberman says, “In some ways, Godzilla was a patriotic movie — Japan’s postwar rebirth, economic miracle, and the reassertion of a national self in a supercolossal package…Godzilla was a way to imaginatively portray — and even exorcise — not just the atomic attack but also World War II in general, and to assuage more contemporary nuclear fears.” Yet, as time went on, Godzilla’s association with nuclear fears became lessened, or at least filtered through a different intent. 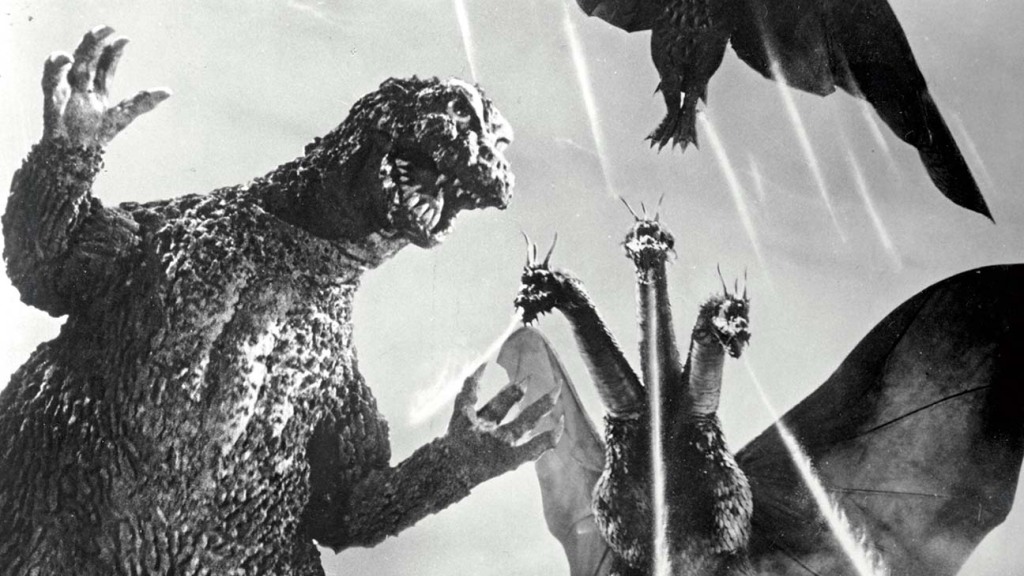 It’s too often too easy for western audiences to dismiss Godzilla movies as schlock geared toward children who buy into men in rubber suits destroying miniature cities. “American kids may have found this ‘suitamation’ ridiculous — even as they loved it,” Hoberman says. “But Japanese audiences responded differently. In part because real people were used, the monster became sympathetic, even poignant.”

While there is a fair bit of schlockiness in the films of the Showa period, complete with a victory dancing and high-kicking Godzilla, there is also an interesting consideration of these kaiju in that many of them went from being feared to embraced as heroes in a novel reclamation of creatures that once were manifestations of national tragedy. Hoberman says, “both destroyer and victim, the monster inspires terror and empathy — perhaps even admiration.”

Godzilla is a survivor, and perhaps there’s no better icon for post-WWII Japan than that. “In subsequent movies. Godzilla becomes a beloved savior and ultimately a mascot,” Hoberman continues. “Thus, Godzilla transformed the trauma of war into fun — or art,” an evolution that places Dr. Serizawa’s line into meta-context. This art born of war, this new mythology, makes Godzilla and his fellow beasts of burden, like Mothra, Gamera and Rodan, not unlike the American superheroes who became a means for children and adults to process WWII and instill a sense of patriotism. And like those caped and costumed heroes, these giant monsters have seen their share of evolution and rebooting over the years in order to better reflect the society that relies on them.

The late ’80s and ’90s saw Godzilla rebooted and this Heisei era brought on a darker consideration of the character along with new fears. This period of Godzilla films in which I am most familiar with, and which launched my love of the franchise, could be likened to the Modern Age of comic books as defined by writers like Frank Miller and Alan Moore. Almost every movie within this series, which rebooted with only the 1954 film as canon, matched monster crises to modern fears. The first film The Return of Godzilla (1984) concerned itself with Cold War anxieties and a fear of repeated nuclear mistakes of the past. Godzilla vs King Ghidorah (1991) has a slightly propagandic intent in a plot that focuses on Ghidorah being sent back in time by a global coalition to destroy present-day Japan and prevent it from becoming the global superpower it will inevitably become. While nuclear waste is still a significant concern, GvKG is largely an expression of Japanese anxiety over its global presence and future position. Godzilla vs. Mothra (1992) took an environmental stance, criticizing the greed and irresponsibility of a major corporation. These fear factors, including ones from Toho’s Millennium and Reiwa eras, rear their heads in Michael Dougherty’s film, but in ways that represent broader concerns that crystalize into the universal language of international mythology.

In the decades since he first appeared in Gojira (1954), Godzilla has become global, a reflection of not only Japan’s place in the world, but the inheritance of issues and conflicts born of earlier eras that we all face. Godzilla has come to represent an ancient desire to understand our place within a natural hierarchy. In King of the Monsters, humanity’s place within that hierarchy is one of a parasite, a harmful organism feeding off the Earth. While the Titans represent balance, a means to restore Earth’s ecosystem.

They aren’t the mutation unleashed upon the world by nuclear travesties and warmongering. We are. King of the Monsters carries an overt message of environmentalism, and also spirituality — a reminder of an inextricable link too often forgotten within our contemporary society. Dougherty’s film may not feature men in rubber suits, but there’s still a uniquely human touch at work here, and a level of empathy afforded to the monsters that reframes our horror of them. There’s still that element of fear, fear of dying off, fear of destroying the world, but King of the Monsters suggests that fear doesn’t have to be a bad thing. Fear can drive our desire to reconnect with our earth and also our gods. Humanity’s fear in this context is a positive aspect as both a call to action and a reminder of a human need to be made aware of our modest scale and to feel in awe of something again. King of the Monsters is about relinquishing control. But, as is true for every great conflict, that control of humanity is sought by forces both good and evil.

Godzilla: King of the Monsters offers an expansive look at Godzilla’s place within our cultural history, one that has become bigger than a single nation but can never be disconnected from Japan and the way in which the character was allowed to evolve there. King of the Monsters utilizes the imagery of our world’s great atrocities and collective anxieties and positions them within the context of our history and spiritual longing. The end result is a film that suggests that we can in fact heal as long as we continue to tell these stories that transform our monsters into myths.

How 'Godzilla: King of the Monsters' Sets Up a 'Kong' Showdown