Audiences could be forgiven for not immediately realizing that this week’s Godzilla: King of the Monsters is the third film in what’s been dubbed the “MonsterVerse” from Legendary and Warner Bros.

While it’s a direct sequel to 2014’s Godzilla it also exists in the same shared universe as 2017’s Kong: Skull Island. Those connections haven’t been aggressively promoted by Warner Bros. The story focuses on the threat faced by the emergence of the massive “Titans,” monsters believed to be myth that are now raining destruction down on the planet.

While the research agency Monarch — introduced in the previous films — is doing what it can, humanity’s best hope may be that Godzilla rises from the depths and fights on their side. Those monsters, instead of the shared universe the movie is part of, form the crux of the marketing campaign. Tracking forecasts estimate a $50 million-plus opening weekend, well below the $93 million stateside for the first movie five years ago.

The first teaser poster, released just before Comic-Con, doesn’t show much but does promise the audience, “Their reign begins,” presumably referring to the monsters of the title. A promotional poster handed out at SDCC shows a little bit more, with a couple dragon-looking creatures fighting each other on an image that looks like the cover of a fantasy novel.

A series of character posters from December offers slightly better looks at Godzilla and some of the other key monsters from the movie, all shown with a person or some other element in the foreground to show how massive these creatures are.

In April a poster was released showing Godzilla standing in the middle of the ocean surrounded by military ships and helicopters, spotlights illuminating him as he breathes blue fire into the sky.

Early May saw the release of exhibitor-specific posters. The IMAX poster showed the many-headed Ghidhora swooping out of the sky toward the waiting Godzilla. That same showdown is shown on the Real 3D poster, but this time with the camera perspective shifted to show the devastation being wrought on Washington, DC. So does the Dolby Cinemas one-sheet, which just shifts the camera again.

As the first trailer (26.3 million views on YouTube), which debuted at Comic-Con, opens we see Madison standing on a rooftop looking for something while we hear Dr. Russell talk about how the extinction event is already upon us. The “Titans” as they’re dubbed have been unleashed to wipe clean the virus that is humanity after spending millennia in hiding. So it’s up to the humans to find all of them so that life can continue in some way.

The second trailer (13.4 million views on YouTube), released in early December, starts out roughly the same way and goes on to have roughly the same general message. The world is grappling with the existence of the Titans, some of whom want to protect humanity and some of whom want to destroy it. Godzilla is the best hope for survival, we’re told, as we see brief, often obscured glimpses of the other monsters and creatures that are upending the status quo and who will be battling each other over the course of the story.

At the end of April the final trailer (15 million views on YouTube) was released, promising audiences this is just the beginning, with 17 monsters being discovered so far. With so many threats, the only hope for humanity is to set Godzilla free to take on the other Titans, a decision many people take issue with but don’t have an alternative to.

A TV spot from early January shows the same opening as the first trailer, with Madison trying to contact someone via radio, interspersing other footage to show audiences what they can expect. A later commercial released in February is more in line with the second trailer, showing the emergence of the Titans and the threat they pose to humanity. Another one a month later focused on the intimidating nature of the monsters and the humans who are overwhelmed by that threat. The main Titans are named in an extended spot from March that makes the stakes of the story clear by threatening global extinction if the humans don’t set Godzilla free to be their champion.

CinemaCon attendees earlier this year got a look at more footage from the film, including a key sequence filled with drama and action. IMAX announced those seeing Shazam! in the large format screenings weeks ago would also get a first look at five minutes from the sequel. The same extended preview was available to IMAX audiences of The Curse of La Llorna.

Shortly after the final trailer hit in late April, a video was released for a song by Bear McCreary and Serj Tankian, the lyrics of which talk very literally about Godzilla and his power.

Outdoor and online ads featured the same image of Godzilla breathing blue fire into the sky seen on one of the posters. There were also banner ads and billboards that used similar images of the various Titans seen on the character one-sheets.

Brown appeared in an exclusive promotional video for IMAX, promising the format was the best way to see the massive action in the movie. 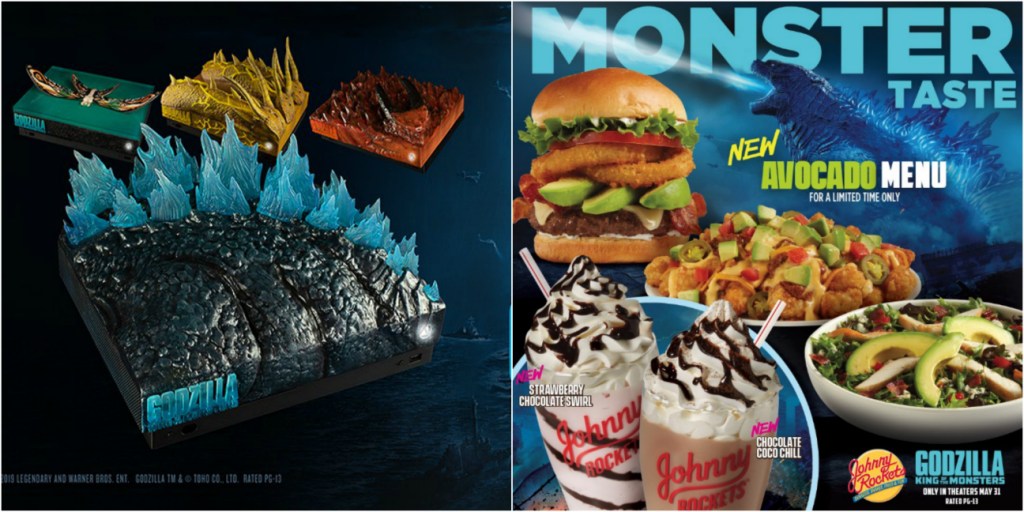 ? PUBG Mobile, which added Godzilla-related clues to the game for players to uncover along with objects to be collected.

? Johnny Rockets, which used the partnership to promote its new menu of avocado-based dishes along with “Monster Shakes.”

? Old Spice, which doesn’t seem to have run or offered a movie-specific campaign or products, but which does have a line of monster-themed deodorants it promoted recently via a video with YouTube star DangMattSmith.

? Xbox, which ran a sweepstakes giving away four One X consoles featuring custom designs inspired by the Titans of the movie, a sweepstakes also supported by gaming company HyperX.

Beginning a couple weeks ago and running through the end of June, seven Kinokuniya Books locations across the country have hosted pop-up stores featuring movie books and other merchandise.

The L.L. Cool J classic “Mama Said Knock You Out” was featured in a final promotional spot that once more explained how humanity is pinning its final hopes on Godzilla beating back the other monsters.

A week before release Fandango was given an exclusive featurette that introduced the “G-Team” explaining how this is the team that has been assembled in the movie to deal with Godzilla and the other monsters inhabiting Earth. That team is part of Monarch Research, which leads us to the final element of the marketing campaign. 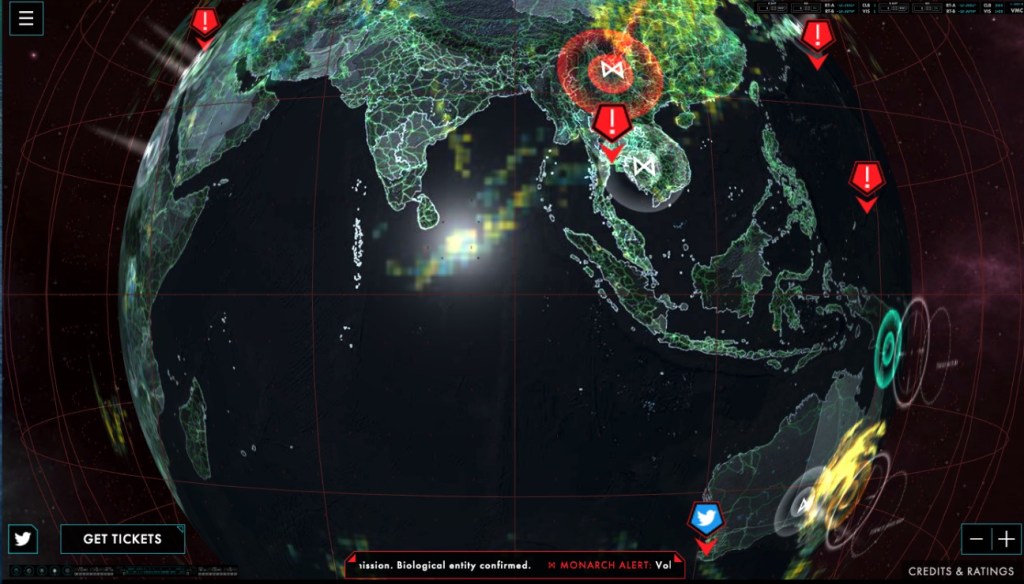 Just as Comic-Con 2018 was getting underway a video was dropped on the movie’s official Twitter account showing Madison, Brown’s character, at a communications console trying to reach Monarch Sciences. Tagged in that post was @monarchsciences, the official account for an organization devoted to ensuring humanity’s survival in the presence of ancient and destructive monsters. Posts on the profile explained that mission, marked Madison’s message received and offered updates on the movements of Godzilla and other creatures.

Exploring the Monarch website shows that the organization has declassified much of the research surrounding monsters like Godzilla and is enlisting people to help track it and other creatures. By clicking various sighting locations visitors can learn what sort of creatures have been seen — including Mothra — and create an ID that shows you are part of the civilian force helping the organization. There are also profiles on the site of the Monarch team that explain who they are and what their role in the scientific organization is.

Updates posted to the Twitter account and the site offered more details on the movements of the Titans, issuing alerts to areas around the globe that threats are headed their way and videos showing what each creature is capable of.

Legendary Comics announced a prequel tie-in comic to fill in the story between the 2014 movie and this one. That comic, titled “Aftershock,” was given a motion trailer that showed off the story and how it connects the two movies by focusing on the Monarch team and their research efforts 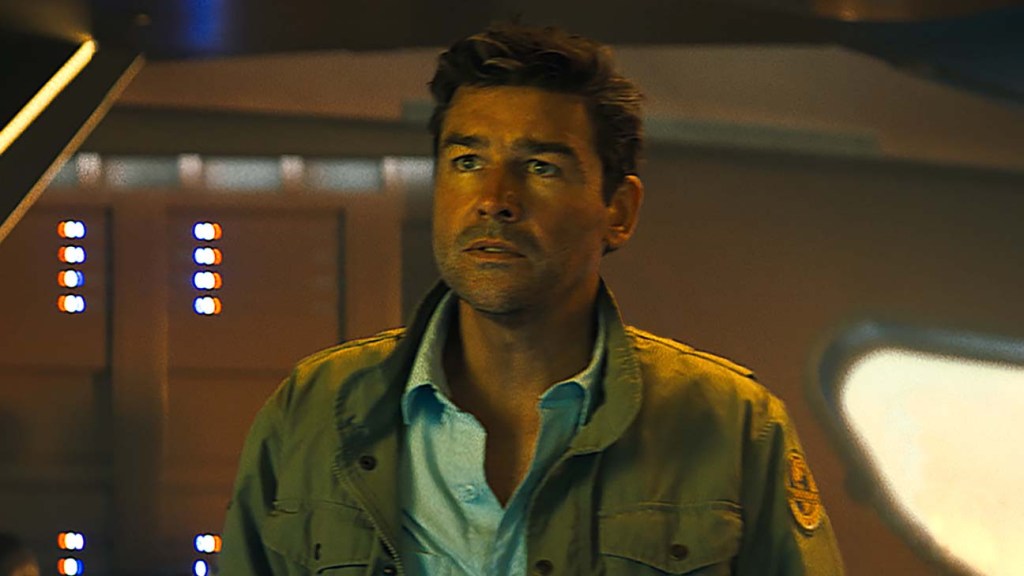 Warner Bros. is already positioning the film as the “King of the Summer” and declaring “Summer starts with Godzilla.”

What the campaign here promises is a lot of monster-sized action that is best experienced on the big screen. But for much of the audience these are, with the exception of Godzilla, new characters and creatures being introduced.

Audiences may not necessarily have all the backstory on Mothra and the others and so aren’t going to geek out at the posters and trailers offering glimpses at their powers and abilities. That world-building speed bump was also faced by Pokemon: Detective Pikachu a couple of weeks ago, but the film overcame it in part by selling Ryan Reynolds’ comic personality.