[This story contains spoilers for Godzilla vs. Kong]

The battle between Godzilla and Kong is bringing enough destruction to level whole city blocks, and level the global box office as well, at least by pandemic standards. Adam Wingard’s Godzilla vs. Kong, the fourth entry in Legendary and Warner Bros.’ Monsterverse franchise, is off to a rousing start globally, and U.S. audiences are getting their blockbuster fix at the theaters and on HBO Max, making the film feel like the first theatrical event movie since 2019. The level of anticipation for the film, and the enthusiasm from critics, are all good signs for a franchise that, less than two years ago, seemed to be heading for its swansong and after the poor box office performance and reviews for Michael Dougherty’s Godzilla: King of the Monsters, which, in all honesty, deserved a much better response on both fronts.

Nevertheless, the Monsterverse appears to have bounced back, and it stands to reason that big things, literally, are on the horizon, for the kaiju-centric franchise. However, it’s clear that there is something of a division in expectations for the franchise between those looking for thematic weight, and those who are simply in it for the monster fights. Neither side is wrong, but perhaps there’s a happy marriage yet to be struck.

Where does the Monsterverse go after Godzilla vs. Kong? Before we tackle the human-side of things, let’s talk about the monsters. While Legendary hasn’t confirmed its next steps for the film side of the Monsterverse, they are collaborating with Netflix for a Skull Island anime series created by Brian Duffield (Underwater). It remains to be seen whether Toho will continue its partnership with Legendary following the end of its contract in 2020, especially considering Toho’s own Godzilla cinematic-universe is in development stages. But there’s clearly audience investment in the giant-lizard, and money to be made, from Hollywood’s take on the icon. 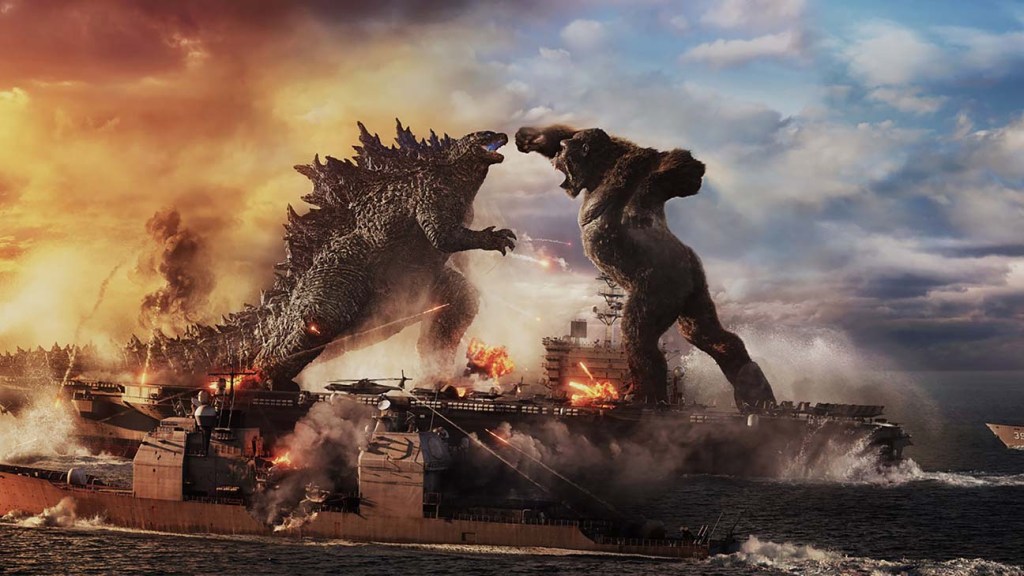 In Godzilla vs. Kong, Godzilla manages to emerge the victor of the conflict, as he should, though the subsequent team-up against MechaGodzilla creates a mutual respect between the world’s two apex titans. With the battle over, Godzilla swims back into the sea, as he’s known to do, leaving audiences wondering if there will be a Rocky II-style rematch, or perhaps other antagonistic Titans, in his future. Hopefully, we’ll see more of Hollywood’s Godzilla, Mothra and Rodan, alongside some familiar Toho characters that Legendary couldn’t obtain the lease to previously: Anguirus, Gigan, King Caesar, Ebirah, etc. But if not, the Monsterverse has certainly proven to be adept at delivering new giant monsters, from Skull-Crawlers to Behemoth (that giant-Mastodon creature from King of the Monsters) to encounter.

With Godzilla’s future in Hollywood in question, and Godzilla vs. Kong giving him a conclusion that sends him off while leaving the door firmly ajar, Kong is positioned to remain central to the Monsterverse franchise. It’s fitting that Kong, whose 1933 film King Kong launched a subgenre, but never managed to achieve the cinematic output of his Japanese rival, could emerge the star of the Monsterverse. Godzilla vs. Kong establishes a new home for Kong within the Hollow Earth, a world within our world where the Titans hail from. Within the Hollow Earth, Kong learns pieces of his ancestry, discovers new monsters, accepts his role as a monarch, and gains awareness of an ancient conflict that encompassed his race and Godzilla’s. And ancient murals within the temple Kong makes his throne room in suggests, an even bigger threat, on the horizon: the World-Serpent, if Redditors are to be believed.

Wingard revealed recently that he cut the film’s post-credit scene, rumored to point to the Monsterverse’s next conflict. The choice is interesting, because it seems fairly obvious that had Godzilla vs. Kong been met with the same reception of as King of the Monsters, it would’ve been curtains for the franchise, and the lack of a post-credit scene at least allows for a sense of finality without creating frustration over a cliffhanger never to be resolved. Legendary and Warner Bros. may have been unprepared for the positive reaction, but even without the post-credits tag it remains clear that there’s plenty to discover and uncover within the Hollow Earth.

The space would not only place Kong at the forefront but create a new world to explore that doesn’t have the familiarity of Skull Island or Tokyo in these movies. In fact, Kong: Hollow Earth has a pretty great ring to it. And with Monarch establishing a new station in the Hollow Earth, there’s an easy answer for including the human characters in Kong’s journey going forward, which brings us to a central issue of what we expect from the franchise’s humans.

As much as the human characters within the Monsterverse are criticized, sometimes fairly and sometimes not, humans remain the anchor to this world, furthering the sense of discovery and awe as new worlds are breached. Going back and looking at the long history of Kong and Godzilla films, humans are always central. The giant monsters sometimes don’t even come into play until a third of the way into the film, and it’s a full hour before Kong shows up in Peter Jackson’s 2005 epic. These are films that have their roots in colonialism and nuclear terror. They are inherently based in human reaction.

In Godzilla vs. Kong, the trip to the Hollow Earth wouldn’t have quite the same impact without humans along for the ride, and citywide destruction doesn’t carry quite the same weight if humans aren’t in peril, suffering the consequences of the establishments they’ve placed their faith in. The Monsterverse relies on human characters facing the clash between the natural world and the unnatural means to control that world. Despite that, the characters in Godzilla vs. Kong are some of the more thinly written of the franchise, and characters who feel like they had more to do before the editing room, like Dr. Mark Russell (Kyle Chandler), Nathan Lind (Alexander Skarsgard), Maya Simmons (Eiza Gonzalez), and Ren Serizawa (Shun Oguri) could have benefitted from another twenty minutes on the runtime. 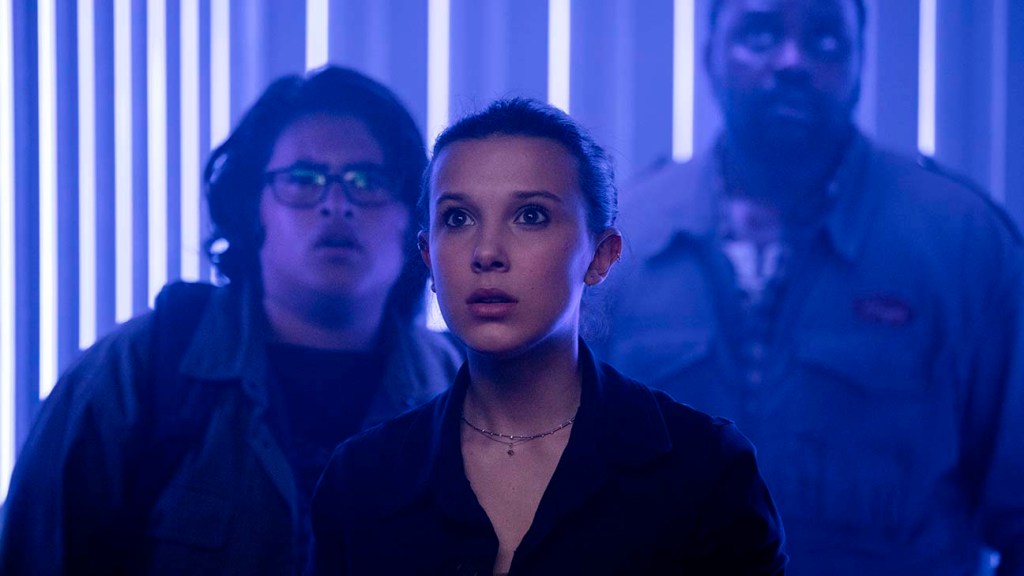 As much as some vocal audience members say they don’t care about the humans, I think there’s a balance to be struck. Yes, we all want to see monsters trade blows, but the threat to the world is meaningless if we don’t actually care about the humans who populate that world. One of the aspects that has made the Monsterverse something of a curiosity among modern franchises is that it has few returning characters. Dr. Serizawa (Ken Watanabe) and Dr. Graham (Sally Hawkins) show up in Godzilla (2014) and Godzilla: King of the Monsters, and Madison Russell (Millie Bobby Brown) and Dr. Mark Russell (Kyle Chandler) are in King of the Monsters and Godzilla vs. Kong, but characters like Godzilla’s Brody family, King of the Monsters’ Alan Jonah, and James Conrad (Tom Hiddleston) and Mason Weaver (Brie Larson) of Kong: Skull Island (2017) have disappeared. Skull Island’s Houston Brooks (Corey Hawkins) had a blink and you’ll miss it cameo, where he was portrayed by Joe Morton, in King of the Monsters, but there’s little character crossover.

As franchises like the MCU, DCEU, and Fast & Furious franchises become increasingly adept at incorporating returning faces and building multi-film arcs, the Monsterverse could stand to lean into that a little more. Sure, the monsters are the stars, but they shine brighter when surrounded by strong supporting characters. Hopefully the Russells, Nathan Lind, Ilene Andrews (Rebecca Hall), Jia (Kaylee Hottle), and Josh Valentine (Julian Dennison) play significant roles in the franchise going forward, while some of the character threads left dangling from the films are revisited. With many U.S. audiences unfamiliar with how significant humans have always been in these franchises, and patience having grown increasingly short for character arcs in blockbusters, maybe the answer to the perfect balance lies in another kaiju franchise.

Legendary and Warner Bros.’ 2013 film, Pacific Rim, manages to perfectly balance large-scale action and heartfelt character arcs. This isn’t necessarily a surprise given Guillermo del Toro’s filmography, but over the course of the film Raleigh Becket (Charlie Hunnam) and Mako Mori (Rinko Kikuchi) feel like full-fleshed out characters, along with the supporting characters that populate the film. It’s not that the characters exist beyond genre tropes, but rather that even when existing within the tropes their each and every action makes sense in terms of who they are established as. There’s an emotional shorthand employed by Del Toro where character development happens on the move, and characters form connections to each other, and the audience, via the Drift, even while they’re bashing monsters. The style and tone of Godzilla vs. Kong positions it pretty close to Pacific Rim, so much so that one could easily believe them existing in the same universe. But we need that emotional connection, we need that Drift compatibility, even if not literally so. But the literal potential is too good not to discuss.

While Del Toro and Legendary have discussed their enthusiasm over the potential for the worlds of Monsterverse and Pacific Rim to cross, nothing has come to fruition. But that would certainly be a kaiju event for the ages, even if there’s a lot of groundwork for the Monsterverse franchise to lay before it could reach that point.

Regardless of whether that crossover ever happens or not, the Monsterverse exists as one of Hollywood’s most interesting blockbuster franchises, because every film is an experiment with tone, visuals, and the ever-wobbly balancing act between humans and Titans. Even if audiences and critics don’t always agree on exactly what these films should be, the inconsistent yet always entertaining Monsterverse delivers the kind of big-screen thrill ride that can’t be replicated: cinematic slugfests that whether aiming for grounded, A-movie resonance or weightless B-movie thrills are a reason to celebrate a return of the theatrical experience. Here’s to the future of the Monsterverse.