Continue to The Hollywood Reporter SKIP AD
You will be redirected back to your article in seconds
Skip to main content
January 29, 2021 12:45pm

In some alternative multiverse, where COVID-19 never took hold and upended Hollywood’s 2020 release calendar, right now we’d probably be debating whether Steven Spielberg’s West Side Story is the frontrunner for the Hollywood Foreign Press Association’s Golden Globe for best motion picture, musical or comedy. After all, the finger-snapping 1961 film adaptation of the ground-breaking Broadway show scored seven Globe noms and three wins, including best musical. Or maybe, for those who dislike the very idea of a West Side Story redo, there would be arguments in support of Jon Chu’s In the Heights, the movie adaptation of Lin-Manuel Miranda’s Tony-winning Broadway celebration of life in Manhattan’s Washington Heights.

In any event, it would be one of those rare years in which genuine movie musicals dominate the Globes category, where more often musicals have been overshadowed by comedies.

Of course, that’s not the world we’re living in at the moment. Both West Side Story and In the Heights were pulled off their original 2020 release dates and won’t be unveiled until later this year. And although there are a handful of musicals bidding for attention this season, once again they run the risk of playing second fiddle to more comedic offerings. 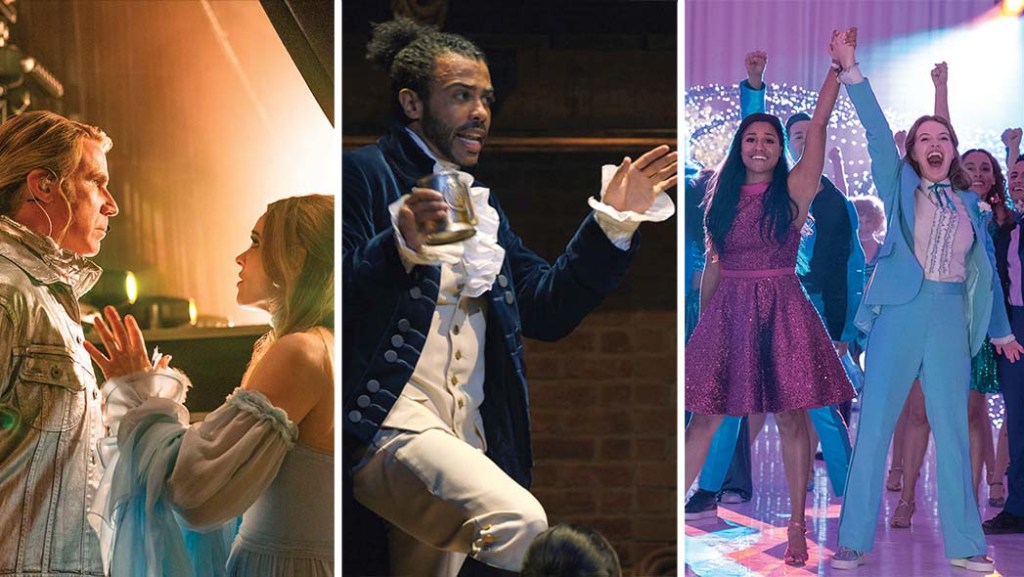 The Globes’ hybrid musical-slash-comedy category didn’t always work that way. When it was introduced in 1951 — Vincente Minnelli’s splendid An American in Paris was the first winner — the category was dominated by musicals. Song-and-dance movies claimed the top prize for the first six years of the category’s existence. (The HFPA voters did make some curious choices along the way: The 1952 victor With a Song in My Heart — in which Susan Hayward played real-life songstress Jane Froman, who entertained the troops in World War II after surviving a plane crash — somehow edged out nominee Singin’ in the Rain, which many now consider the quintessential Hollywood musical.)

Musicals occasionally re-asserted themselves — 1964’s My Fair Lady and 1965’s The Sound of Music were back-to-back winners — but musical wins eventually became the exception to the rule. That shifted a bit with the dawn of the 2000s: Four musicals — 2001’s Moulin Rouge!, 2002’s Chicago, 2006’s Dreamgirls and 2007’s Sweeney Todd: The Demon Barber of Fleet Street took the prize, while 2005’s Walk the Line, more of a drama with music chronicling the careers of Johnny Cash and June Carter, also notched a win. During the past 10 years, though, only two musicals — 2012’s Les Miserables and 2016’s La La Land — were crowned.

It wasn’t always the HFPA’s fault. When given the Hollywood treatment, some long-running Broadway musicals turned into big-screen clinkers: 2005’s Rent and 2019’s Cats both landed with a thud and were largely ignored by the Globes.

This season, looking toward the 78th annual Golden Globe Awards set for Feb. 28, there are only a handful of musical movies likely to make a bid for the Globes’ brass ring, most prominently Ryan Murphy’s candy-colored The Prom, his adaptation of the 2019 Tony winner, which unapologetically embraces its movie musicalness with exuberant numbers.

But it faces competition from Miranda’s Hamilton, which was originally scheduled for a 2021 theatrical release, but then, amid the pandemic, shifted to a July 4, 2020, debut on Disney+. Since it’s a filmed version of the actual Broadway show, it’s ineligible for Oscar consideration but still qualified for the Globes, where, even if it doesn’t command the top prize, its performers could earn attention in the musical/comedy acting categories. And also lurking in the wings is Eurovision Song Contest: The Story of Fire Saga, which may be more of a comedy with music but is nonetheless stuffed with over-the-top parodies of international pop.

Still, those movies — and a few others like Jingle Jangle: A Christmas Journey and The High Note — could be crowded out by a raft of comedies ranging from the raucous Borat: Subsequent Moviefilm, to the geographically located Palm Springs and The King of Staten Island, to tales of eccentric parents in On the Rocks and French Exit.

If that happens, the only response to the question of whether or not a musical can win big at the Globes is, “Well, maybe next year.”