When The Great Hack premiered at Sundance in January 2019, and months later launched on Netflix in June, a global pandemic was not a reality most envisioned in the near future. The Emmy-nominated documentary from husband-and-wife team Karim Amer and Jehane Noujaim, who previously earned an Oscar nomination for the 2013 doc The Square (which Noujaim directed and Amer produced), is not about a global health crisis. Rather, the film concerns the data that the public hands over to tech companies willingly every day — and what happens when that valuable information is exploited for profit and weaponized for political gain.

For those now extremely aware of the potential contagions that float in the air, the early moments in The Great Hack are particularly unsettling. Incorporating animated elements that root the notion of “going viral” back in its etymological origins, the film offers a striking depiction of how frequently we shed much of our personal information with every credit card swipe, every “like” of a friend’s status update, every news article we open to read on our phones. The film makes the invisible, intangible nature of “data” very real and very visible as information floats off human bodies and into the ether. As producer Judy Korin says, “Karim and Jehane are incredible cinema verite filmmakers, and we talked a lot about making the animated equivalent of the cinema verite experience.”

But it was even more important for the filmmakers to create the sense that the invisible is not to be ignored. “Without a physicality,” Amer says, “it’s very hard for people to wrap their head around the crime.”

The crime in question is the Cambridge Analytica scandal, in which the British political consultancy firm used data obtained via Facebook to influence the Brexit vote in the U.K. and 2016 presidential election in the United States. But the events of four years ago set the stage, in Amer and Noujaim’s perspective, for an almost-unavoidable dystopian future — and present. “The reason we made this is we felt that the protection of the sanctity of the democratic process is something that we need to protect and preserve,” Amer says, “especially when it comes to voting, and whether we can have a free and fair election again.”

The technological tools we use every day to make our lives more convenient — and upon which, especially now, we rely to connect us with our family, friends and colleagues — were perhaps not created for suspicious reasons. But as the internet became more invaluable (and unavoidable), we’ve given more access to our inner lives to those who can use that information to their advantage. “You get targeted with ads, and that seems harmless,” Noujaim says. “But it’s insidious when you think about where this could go.” Targeted advertising is so prevalent that it’s easy to joke that your phone is listening to you when you come across an ad for something on Instagram. But our lives are so dependent on this technology that it’s become a mundane aspect of our daily lives. “Young people now no longer have a sense of what it’s like to live offline,” Noujaim continues. “We’ve lost the right to be invisible.” 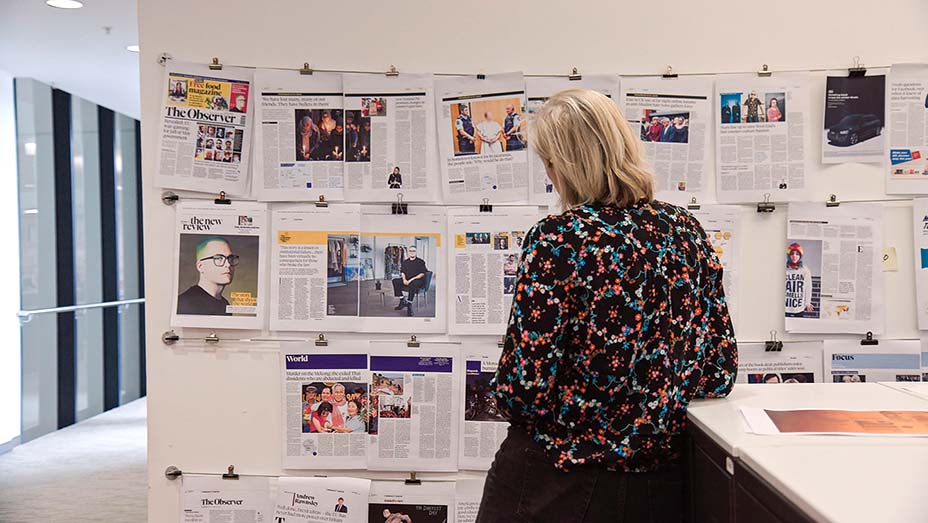 While we are being watched and tracked, the information trail we leave behind makes us prone to more nefarious targeting — far worse than advertising and marketing. That’s exactly what happened in 2016, when Cambridge Analytica used its tools to identify “persuadable” voters in key political battlegrounds and then feed them misinformation on social media. The ethics of rigging an election are one thing; it’s another to suggest that those who control our data are manipulating us, taking away our very sense of free will. “The people who wield the ability to edit what we see actually wield the power,” Noujaim says.

The film’s personification of that philosophical dilemma is found in Cambridge Analytica employee-turned-whistleblower Brittany Kaiser, who may be the documentary’s most fascinating subject. Once an intern for former President Barack Obama’s 2008 campaign, Kaiser took a hard right in her career to work with Cambridge Analytica on Ted Cruz’s presidential run before eventually pitching the Trump campaign. The film follows Kaiser as she struggles with her complicity in the company’s unethical use of Facebook user data — and with her desire to speak publicly about it. As she reflects on her work, she herself shows how easily one can be manipulated by power and clout to turn a blind eye toward a destructive force — much like most of us are able to push away any worries about who may be watching us as we log on every day. “Brittany is a microcosm of the greater story of who we are and where we’re going,” says producer Pedro Kos. “It’s very easy to point a finger at Brittany, but we are given a devil’s bargain every day when we go to a website and click ‘I agree.’ There are different levels of complicity.”

Netflix Threatened by Brexit Backer Over 'The Great Hack' Doc

Amer and Noujaim themselves aren’t anti-technology, but rather see the tech industry frustratingly under-regulated. “Facebook and Twitter were so excited about how their [platforms] were these democracy-building tools,” Amer says, pointing to social media’s influence and use in the Arab Spring. “But when those same tools were used by ISIS for recruitment, or were used by authoritarian governments in the Middle East, none of those companies were taking credit [for that]. We saw that hypocrisy firsthand.” Now, Amer says, those tools are being used more diabolically in the West. “Having traversed the world of the Middle East and the United States all our lives, we understand what it’s like to live in a country that slips into authoritarianism. No one ever believes that it can happen to them, but it does.”

Today, less than three months away from the next presidential election — and in a time when the information fed to the public across social media platforms is not exactly trustworthy — The Great Hack serves as a troubling cautionary tale. Will we be able to break ourselves free from manipulation in order to protect our own democracy? “These values and traditions that we find in the United States to be self-evident aren’t birthright,” Amer says. “They’re things that you need to fight for and protect.”