If the real P.T. Barnum — half-bald, portly and stodgy — were alive today, no doubt he would be thrilled with actor Hugh Jackman as his cinematic counterpart. Fortunately for viewers, The Greatest Showman is “inspired by” and not an actual period-perfect biopic.

Director Michael Gracey, the creative genius behind the contemporary musical that celebrates the larger-than-life visionary who literally invented “showbiz,” designed the film with a “heightened theatrical reality” in mind. Influenced by childhood favorites West Side Story, The Sound of Music and Mary Poppins, along with Bob Fosse’s All That Jazz, he was particularly inspired by Terry Gilliam’s work on The Adventures of Baron Munchausen. “Everything he does has this theatricality to it — the miniatures, textures and wardrobes — and l love that heightened feel as it speaks to the storybook worlds I wanted to create as opposed to trying to emulate reality,” notes the Aussie director. “This is really important in a musical when you have people breaking into song.” 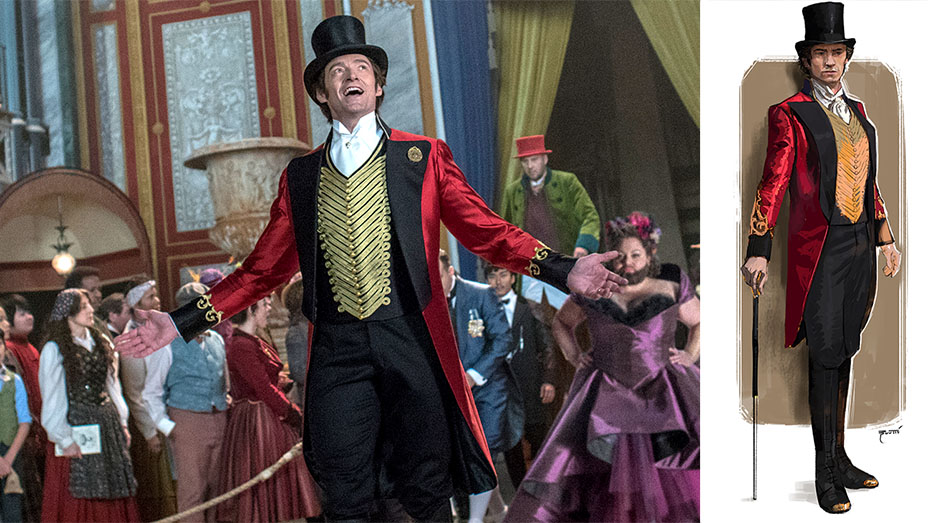 Translating the filmmaker’s vision via costumes for the fantastical life under the proverbial big top fell to Emmy Award-winning designer Ellen Mirojnick, who is no stranger to period pieces (The Knick) or over-the-top costumes (she won an Emmy for her Liberace capes in Behind the Candelabra). “The very first thing Michael said to me was that this is a story inspired by P.T. Barnum and he did not want it to be a period-centric film,” she says. “He wanted it to be classic in the way of feeling romantic and as if it was fashion-forward and ripped out of an editorial one would see out of a fashion magazine like Vogue.”

Creating up to 800 costumes within an extremely limited time period, designing clothes for dance and the question of “how do we create the feel and look of romantic fantasy, keeping it being real and relatable and have a fashion edge?” represented the major challenges. Researching both the 18th and 19th centuries (Greatest Showman takes place “a long time ago in the 1800s“), Mirojnick also looked to the designs of John Galliano (1998-2001) and Christian Dior (2001-2007) for direction. “Galliano used a hybrid of every century in the world to create his designs, and we basically did the same thing with the same point of view,” she explains. 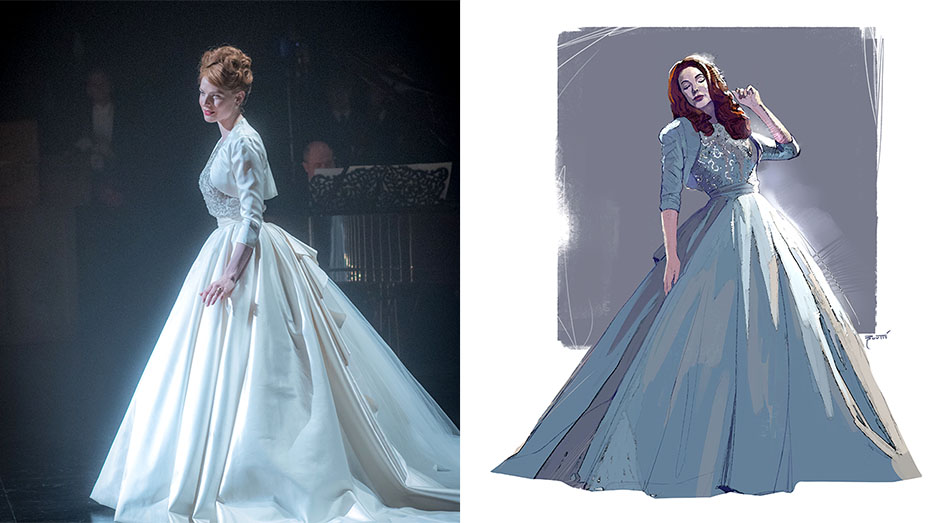 Clothing Jackman as Barnum involved a wardrobe from his early days of making ends meet up to a life of wealth and meeting the Queen at Buckingham Palace. Perhaps the piece de resistance was the ringmaster’s jacket. Composed of a luminous red silk and wool with a braided gold bullion chevron pattern on the vest with engraved “B’s” on the gold buttons, Mirojnick recalls the first time Jackman came in for the final fitting.

“I have never seen the birth of a character more clearly — and it brought tears to my eyes, as well as my assistants and cutters,” she says. “This was seven years in the making for Hugh and his dream, and to watch him put on that costume slowly piece by piece ending with the red coat — I have never seen an actor transform as magnificently as he did. Watching him blossom into the character was like a flower opening!” 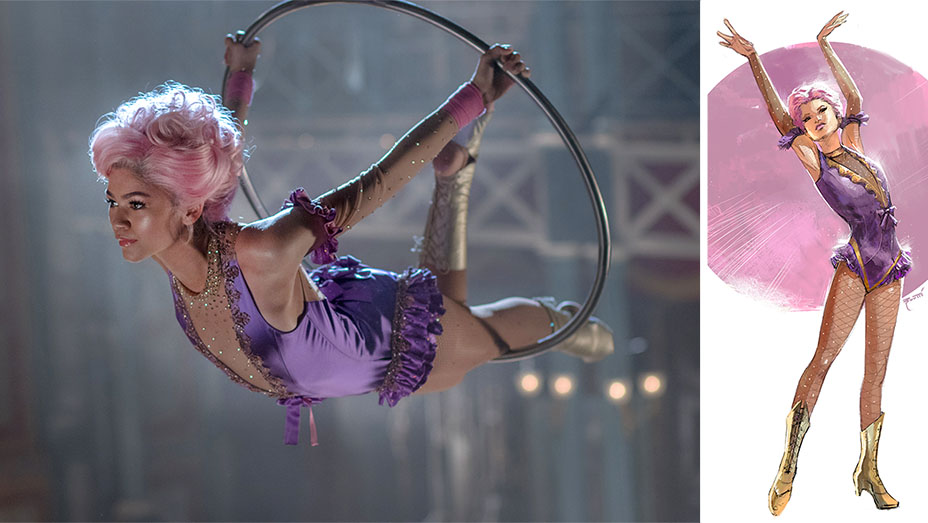 Due to a limited budget, Mirojnick relied on donations from Marchesa, Zuhair Murad and J. Mendel, among others. For Swedish songstress Jenny Lind’s (Rebecca Ferguson) opening number, the designer deconstructed the skirt of a spectacular silk satin Zuhair Murad wedding dress. Michele Williams, who plays Barnum’s long-suffering wife Charity, wears a pink Marchesa silk satin dress that was remade. “Williams’ silhouette was refined, modern, womanly and simple, and velvet capes were a great addition to her character. She looks like a little fairy princess,” says Mirojnick. Breakout star Zendaya receives some of the film’s more colorful costumes, particularly the orchid V-neck trapeze outfit (she did her own stunts) with matching pink hair and modern gold boots.

The use of color also contributed to the director’s heightened reality as Gracey says, “This was really important to me, and I did a lot of sketching with artists beforehand to work out the color palette, which influenced the wardrobe and set design.” Mirojnick concurs, noting, “The color envelopes you, it’s so alive and full-bodied. It starts with a song, comes alive and bursts onto the screen and everything in terms of light, color and sound shifts.” 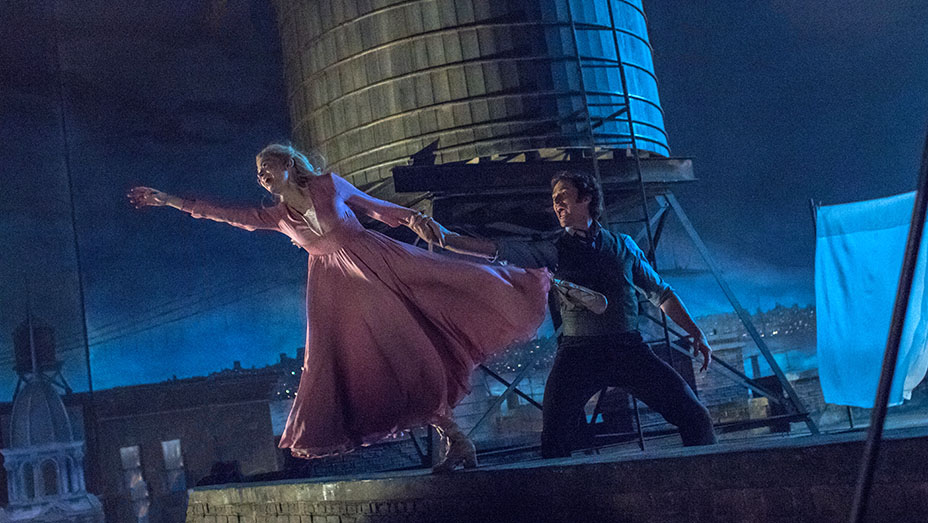 Nowhere is this more evident than with the costumes of Barnum’s trademark human menagerie of colorful characters known as “The Oddities” that included the Elephant Man, Albino Twins, Tattoo Girl, Bearded Lady and Gold Girl, to name a few. Notes Gracey: “My favorite characters were the ones that Ellen executed in such an unexpected way. The Albino Twins had this sort of dripping wax latex feel to their tops, which was stunning, and the Gold Girl was so striking — to me, it was period, but could have been in a Vogue editorial.” For the Bearded Lady’s costume, Mirojnick first dressed her in a floral waterfall silk taffeta married with silk tulle number. “When Michael first saw the dress, he was not a fan of prints and unhappy,” she recalls. W”e had to shoot in two days, so I turned the dress inside out.” The result was a sculpted magnificent two-tone dress that is a showstopper.

Costume design played an important narrative role in the project that took seven years to bring to the screen and was shot in less than a year. “Ellen really brought these characters to life, and all I could think about is how all those people [the actors] could inhabit the characters like never before,” says Gracey. “And one of the main themes of the film embraces celebrating what it is to be different and celebrating what it is to be unique. It reminds me of It’s a Wonderful Life.” 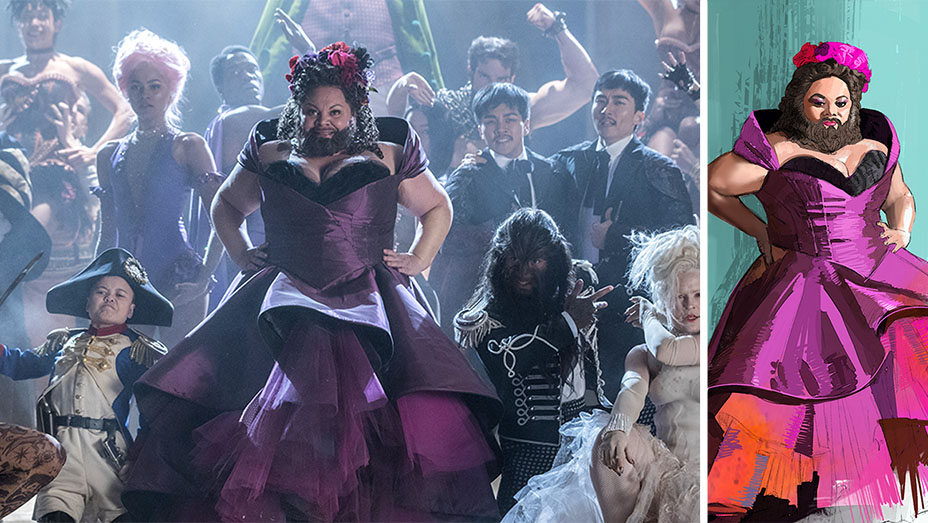