Anytime Greta Gerwig and Saoirse Ronan are reunited after some time apart, the conversation immediately is taken over by giggles. Their bond is so close, you’d assume they were longtime best friends, rather than a director and her muse.

It turns out they’re a bit of both, which is what’s made this partnership so fruitful. Ronan, 25, already has earned her fourth Oscar nomination, and half of those have come from working with Gerwig, 36. Their first collaboration, 2017’s Lady Bird, also earned actress-turned-filmmaker Gerwig her first directing and screenplay nominations.

And now, with Little Women, they’ve not only garnered more nominations (lead actress for Ronan, adapted screenplay for Gerwig), but they’ve been able to witness each other grow and, as they put it, “step into yourself a little bit more.”

When did you first become aware of each other as artists?

GRETA GERWIG I first saw Saoirse in [2007’s] Atonement. I thought she was amazing. I was an adult by then, and I never knew that child and I would become friends and collaborators, but that is indeed what happened. Then I had this feeling as I watched her grow up and come into her power onscreen that I couldn’t really believe it was the same person. I saw her in Hanna later and I was like, “Is it possible that it’s the same lady?” I knew Wes [Anderson] a little bit and I knew she was in Grand Budapest [Hotel], so we passed each other like ships in the night at the premiere in Berlin. Then there was one incident where we both ate breakfast at the same hotel in London, and I definitely noticed her, but we didn’t talk.

SAOIRSE RONAN I didn’t actually know that you were in that hotel that day! I remember years before having breakfast at a hotel in London and the person I was with said, “You know who that is over there? It’s [Gerwig’s writing and life partner] Noah Baumbach.” And I should’ve gone over to him because I just saw Frances Ha. I remember watching you in all these different movies before we met and thinking that there was nobody that was acting in your style. There was nobody else like that. Then we finally met in Toronto, at the festival.

GERWIG You were there for Brooklyn and I was there for something else, but I was making 20th Century Women when I was there.

RONAN We met, and I didn’t know whether it was going to be like an audition or even mean anything. We ended up reading through the whole [Lady Bird] script. The whole way through I was like, “Should I be acting my ass off now or just reading it?” I didn’t know. One of the things that Greta and I always say is that whenever we get together, we just get so giggly and very excitable. That was sort of instant. We were very lucky that we had that straightaway.

GERWIG As soon as you first started reading the script, I knew it was a movie. It’s funny, I feel like since I’ve known you, you went from being 20 to 25, and I went from being 30 to 35. I feel like we both grew into another thing together, which is the joy of working with someone like this. I hope we get to be old ladies together making movies about old ladies.

RONAN I remember, especially around Brooklyn, there was probably two and a half years there, where everything was happening before you could really catch up to it, professionally. I got on to being in that weird spot as a teenager, and I remember older actresses, like Keira Knightley, Sarah Bolger, people like that, saying that when you get to be 18 you’re fucked because they just don’t know what to do with you and there will be no roles for you. You’re not a kid anymore, but you’re also not a woman. That’s exactly what happened. So there was a lull. Then with Brooklyn and with Lady Bird, to suddenly be going into that next stage of leading things as an adult or a young adult, I realize now it was a bit overwhelming. 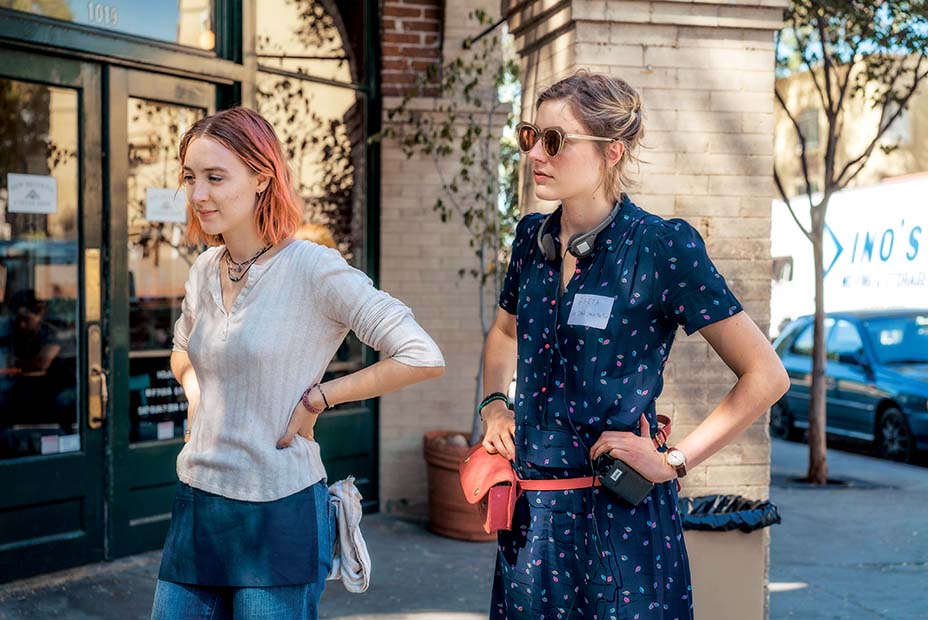 How did working together on Little Women differ from Lady Bird?

GERWIG It’s the benefit of working with someone you’ve worked with before. I felt like in some ways, I had conceived Lady Bird before I knew she was playing it. And I had written my drafts of Little Women before I knew she was playing it. But I don’t know any other way to say it except she was an author of Lady Bird, but even more so she was an author of Little Women. I felt like she knew exactly what we were making the whole time as a filmmaker, as much as an actor. She really became a second director for me. It was like an extension of every thought I had, she’d walk it out another step. I think honestly the closest I’ve had to it is writing with Noah.

RONAN There’s no other working relationship I have like the one I have with Greta. I think Greta was just meant to do this. I could see that on Lady Bird. She has such a great understanding of people. The only concrete difference I think between the two projects — and I don’t know if this is because we did have a bit more money and a studio behind this — is that we would have different versions of the scene on most days. Greta would rewrite them as we’d go, and she’d be coming to work in the morning and she’d have an almost completely new version of the scene. I don’t want to say confidence, because she’s always been confident, but that just sort of stepping into yourself a little bit more … you can see that in the way she’s approaching the work.

GERWIG The thing about rewriting the scenes ahead of time was also to deal with the fact that because of the studio, I had cut the script — and then I would also want the lines back right before [shooting]. I was so terrified that if there was a paper trail, they would tell me I couldn’t have it. So the night before, I’d be like, “This is slightly different.” Saoirse is such a master of the text and comes at it through the words, I’d feel like sometimes she’d be like, “Oh, for fuck’s sake.” (Laughter.) But I was talking about this with Noah yesterday — I can’t believe that we made this movie this way. I can’t believe we got away with it, in how the movie felt so complex narratively, how it’s in some ways a digression about literary theory and authorship and money and all this kind of stuff. I don’t know that anybody would have said, “Go make this movie,” had they really known what we were going to make. 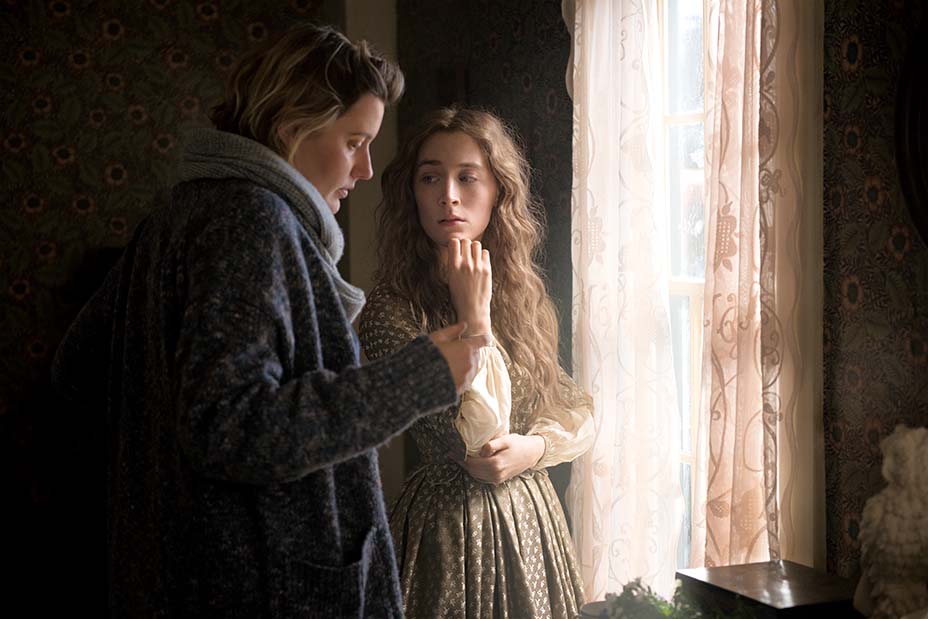 How have you seen Saoirse grow and change as an actress?

GERWIG I said this during Lady Bird, I’ll say it now: I don’t know really know how she does what she does. I know that when we’re on set together that we’re both playing the same game. I don’t know what that means, exactly, except for that we both know the rules and we know when it’s clicking. Her talent has always been her talent, and that’s a God-given gift. But I think that for a lot of actresses who have their talent, there’s a tendency if you have that much talent, if you almost have a prodigy-level talent, I think that it’s easy to get scared because how do you deepen that? I think that whether it’s that she’s stayed away from Hollywood or that she’s done the work or trusted her gut or whatever it is, she’s taken this God-given thing and deepened it and grown it, which, I think that takes such a strength of character. She has honed it and deepened it. I have a little baby right now, and at every moment he is fully who he is. Then later — and he can’t talk, but later when he can talk — he will be fully that baby. It doesn’t make this moment any less whole. I think the miracle of Saoirse as an actor is that we watched her grow up, and every minute she is at her fullness.

Have you already talked about what you want to do together next?

RONAN When we were together after the nominations, we had mimosas and I was like, “I don’t want to imagine you making a film without me! I can’t stand it!”

GERWIG I feel the same way about Saoirse as an actor. I know she acts with other people and she should because she’s great, but a small part of me becomes incredibly childish for one second. I’m going to act in a play, which I’m terrified about, but I’m going to do it. Then I’m going to write. But I’m interested to see what movie we make when Saoirse’s in her 50s and I’m in my 60s. Won’t that be interesting? But I always joke about, we’ll hear from Saoirse through her agent one day; it’ll be like, “It’s a pass. She loves you — of course she would do anything, but not this one.” (Laughter.)

GERWIG I could tell that Wes was not 100 percent thrilled that I was working with her. He loves her. I remember I asked Wes about Saoirse. He read the script and was like, “Saoirse can do anything. She can do absolutely anything.” I may be projecting, but I think he might’ve been a little jealous because he’s trying to take her back. (Laughter.) We’re in a round robin with Joe Wright.

Saoirse, after watching Greta, do you ever think about writing or directing?

GERWIG Hell yes, she does!

RONAN Yes. I think working with Greta over the past few years really allowed me to seriously consider doing it in a way that I haven’t before. I do think that even though I don’t see Greta as a “woman director” — she’s just a brilliant director — there is definitely something about seeing a woman that you’re close to and feel a kinship with do what she’s doing and have that authority on a film. Seeing her take on that role as the captain of the ship, and do it so beautifully, has been an inspiration.

The First Couple of Film: Greta Gerwig and Noah Baumbach Open Up on Their Personal and Professional Partnership