[Warning: The following post spoils, mildly, part of Guardians of the Galaxy Vol. 2. If you want to remain entirely unaware of what happens in the movie, look away now.]

If you walked away from Guardians of the Galaxy Vol. 2‘s post-credits scene wondering just who was being set up for future movies, here’s your answer.

The “Adam” that Ayesha (Elizabeth Debicki) refers to is Adam Warlock, whom director James Gunn has confirmed will show up in the third movie. (He won’t be in Avengers: Infinity War). Adam is central to Marvel’s cosmic mythology, but are movie audiences ready for a hero who is literally his own worst enemy?

Warlock’s comic book history gives a few hints as to where Gunn could take the character.

Warlock got his origins in 1967’s Fantastic Four Nos. 66-67, created by Jack Kirby and Stan Lee. The two-part storyline centered more on the evil scientists attempting to bring him to life through cloning and genetic modification in an attempt to create the perfect human being; when he eventually appeared, nameless — although he was referred to as “Him!” on the cover of No. 67 — he was so perfect that he seemingly abandoned Earth altogether. “The planet of humans is not for me — not yet,” he declared. “Not till another millinnium [sic] has passed!”

It actually only took another couple of years for Him! to return; 1969’s Thor No. 165 revealed that he had actually left Earth, but was caught in a “strange and deadly space trap” that sent him back to Earth. After a fight with Thor that ended the following issue, Him! once again ended up in space, this time trapped in a space cocoon. As unlikely as it seems, things were about to get far, far stranger for the character.

The hyperbole on the cover of 1972’s Marvel Premiere No. 1 said it all: “Tomorrow’s superhero… Today! A Man God Reborn,” it exclaimed, as Warlock — who finally takes on the name Adam Warlock in the second issue, thanks to a well-meaning hippie — becomes recast in a psychedelic retelling of the New Testament where he is playing the Christ figure. It’s not subtle; Warlock discovers an alternate Earth created by a super-scientist called the High Evolutionary, whose work is corrupted by “The Man-Beast,” a creature who introduced evil to the world in a thinly veiled reference to Cain slaying Abel.

By issue’s end, Warlock has volunteered to go to this second Earth — which will eventually become known as “Counter-Earth” — to rid it of the Man-Beast’s influence, and redeem the souls of those who live there. It should come as no surprise that, when the storyline eventually finished in 1974’s Incredible Hulk No. 178, it did so by literally crucifying Warlock and then letting him rise again, saving the world before leaving humanity. Anyone who missed the allusion was clearly not paying attention.

And yet, things would only continue to get stranger. Writer and artist Jim Starlin revived the character in 1975, and — inspired by personal experiences fueled by chemical means — took a new approach that saw Warlock struggle with existential crises made real, including a fight with his dark side as personified by a literal evil version of himself called the Magus. Starlin brought in characters including Thanos, the Avengers and Spider-Man to emphasize the scope of these stories, in the process laying groundwork for much of what would become the Thanos/Infinity War elements of the MCU.

By the time he was done — 1977’s Marvel Two-in-One Annual No. 2 — Warlock was dead, finally at peace with his soul now residing in the Soul Gem (One of the Infinity Stones, in the MCU). That wouldn’t last, of course. It would be Starlin himself who resurrected the character for the 1991 Infinity Gauntlet series, which then led to a number of related projects in subsequent years, including Warlock and the Infinity Watch, Infinity War and Infinity Crusade. In this incarnation, Warlock was a wise defender of reality itself against cosmic threats beyond most people’s imaginings; cool, calm and certain in a way he had never been before.

After a brief retirement that coincided with the character’s disappearance from comics in the late 1990s — and, not coincidentally, Starlin’s temporarily parting ways with Marvel — Warlock was resurrected for the Annihilation: Conquest comic book series in 2007 that gave birth to the Guardians of the Galaxy as movie audiences know them today. Warlock was actually a founding member of the group, but things didn’t end well for him; he was transformed into the Magus, his own evil alternate self, and killed for the second time.

Once again, his death didn’t take, and once again, it was Starlin who was responsible for bringing him back to life. In this most recent rebirth in 2014’s Thanos: The Infinity Revelation graphic novel, Warlock wasn’t just given a new lease on life, he was given a new lease on a different life — Starlin suggested that this new Warlock was actually from a parallel dimension and had overwritten his existence on top of the original Warlock’s life, changing history and upsetting the natural order of things to the point where the disoriented alternate Warlock accidentally destroyed the universe. Things were fixed with the aid of Thanos, of course, and a version of the original Warlock restored along the way.

Adam Warlock, then, is anything but an average hero. More powerful than the other Marvel characters — even Thanos, the big bad of the universe to date — he’s someone whose stories are intentionally stranger and more obtuse than the average, and one who could make the much-hyped psychedelia of Doctor Strange seem dull by comparison. Never mind whether movie audiences are ready for him — are moviemakers prepared for what the challenges he could bring? 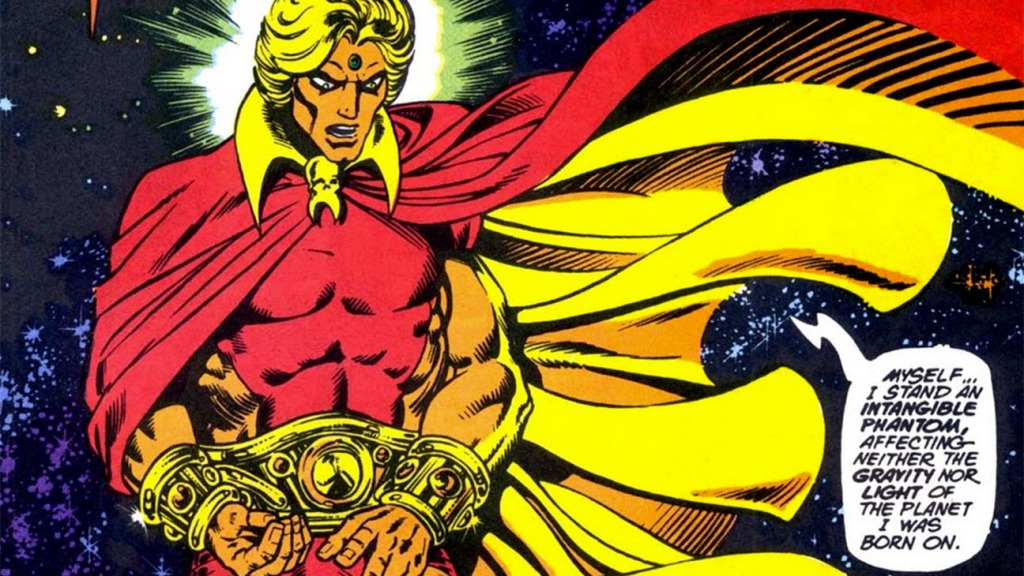