[Warning: This story contains spoilers for Guardians of the Galaxy Vol. 2.]

If Guardians of the Galaxy Vol. 2 felt more spontaneous than the average superhero movie, there’s a reason for that.

Cinematographer Henry Braham worked closely with director James Gunn to perfect a shooting style that would look big — while also giving the actors room to explore the material without having a camera in their faces. The work paid off with a surprisingly personal summer blockbuster that also includes perhaps Marvel’s most touching ending yet, one that saw Yondo (Michael Rooker) sacrifice his life so that Peter Quill (Chris Pratt) might live, while being welcomed back into the Ravager fold during his funeral.

A philosophy of spontaneity infused the entire production, so much so that the day after Pratt and his Guardians stars shot Yondu’s funeral scene, the star and Gunn came back and informed Braham they had a better idea for how it could all go down — and he would need to reshoot Pratt’s eulogy.

In a conversation with Heat Vision, Braham reveals the skill it took to make that funeral tweak a reality, the months of planning Baby Groot’s opening number required to pull it off and how the team nailed that prison-break sequence.

Yondu’s death was one of the movie’s most moving moments. What was it like capturing Chris Pratt and Michael Rooker in their final onscreen moments together?

It’s very moving. We all knew it was going to be a very difficult scene for them to shoot. Not least, because they are hanging on wires, which aren’t particularly comfortable. So no matter however brilliant the stunt team is in rigging them, hanging on the wire is uncomfortable. And we had to think carefully about how do we make it the least intrusive for those two actors to perform. How do we make it the least intrusive, and yet get the audience right inside the circle — in with them. It takes respect for what they have to do. In reality, the scene was shot very, very quickly. I think it took a morning to shoot. But it took many days thinking about how are we going to make this a day that it’s about shooting the performance and not about shooting all the other stuff. 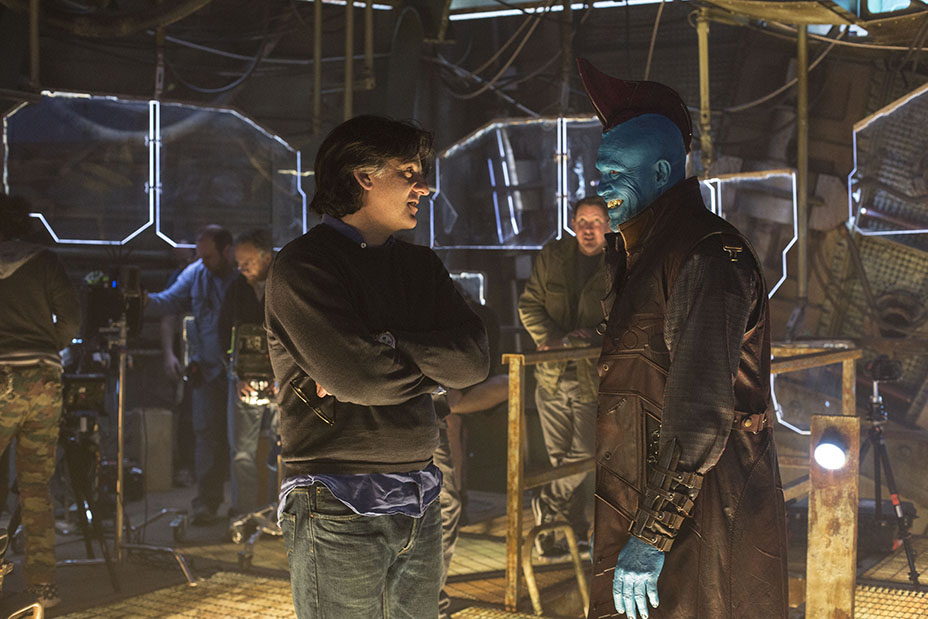 Is there anything looking back that you think, “Wow, I’m really proud of this particular moment”?

Sometimes some of those moments are completely unnoticeable, and actually one of them is after Yondu’s funeral, Chris’ speech; we shot it on the set and the next day James came to work — and he and Chris had thought of something that they’d missed — so they wanted to reshoot it. And actually Chris is inserted into that scene. He shot against bluescreen, and we had to match the lighting, match absolutely everything perfectly from the shot we did before. We have to match the timing of the camera’s moves in and around the scene, perfectly with his dialogue and everything else. It’s complex. But of course hopefully for the audience it should be absolutely seamless. It’s the bits you don’t see are sometimes the most complex.

[Editor’s note: A week after this conversation, Gunn weighed in on this part of the story and shared details from his perspective on how it went down. Check out what he had to say here.]

The prison-break sequence was beautifully shot. What was the key to that?

James starts with the music track and he started with a very clear idea of how he wanted the choreography of that to work. And in choreographing that, if you look at the storyboards and the pre-vis [pre-visualization], it’s very close to how it’s achieved in the end. It’s almost like a ballet, the way the camera moves, the way the arrow moves, the way the actors move. It’s a beautifully timed ballet. That’s why it’s so fun to watch. It comes at just the right point in the movie, and nothing like a bit of retribution, and at the same time it’s just beautiful to watch.

The opening Baby Groot montage looked quite seamless. How did you capture that?

James thinks very carefully about how he wants to shoot those sequences and nowadays we can use pre-visualization — it’s very, very sophisticated — to work out what ideas work and what ideas don’t work, especially when it’s a combination of animation and live action. My role in those things is to work with the director, and one of the brilliant things about pre-vis, it’s a bit like a video game. It’s surprisingly sophisticated. But at the same time, it lacks humanity. And one of the things I do a lot in those very early stages of the movie is to help thematically bring imperfections into how the camera behaves. And sometimes that’s the difference between something appearing to work and appearing not work. That sequence took many, many months of people collaborating together. That’s one of the best things about those movie is it’s a huge collaboration and a great deal of people. That’s filmmaking at its best, I think.

What were some of the things you and Gunn spoke about as you began work on this project?

What I learned very early on from talking with James is what this movie is about is humanity and truthfulness and relationships. On one hand, everything that is there is written in the script and it’s absolutely beautifully written. But on the other hand, what I learned from him early on was the way he likes to work is to explore the script and go on a journey with the actors and find their performance. And equally what he was interested in is going on that journey with the camera, too. In particular to capture that spontaneity. A lot of that lightness and reaction comes from capturing the moments of spontaneity. The spontaneous bits of performance that each of those actors give, which is totally driven by the script and by James kind of pushing them to find what’s truthful or what’s funny or what’s appropriate for the scene. We realized there are two completely opposing ideas of how this film needed to be photographed. On the one hand, the visual idea is it’s a big-screen, fantastic world. It’s a great adventure. It’s a movie you absolutely want to go to a theater to see. And on the other hand, we wanted to shoot in like a documentary to capture the spontaneity of the performances.  As you can imagine, those are almost two completely opposite things to do. 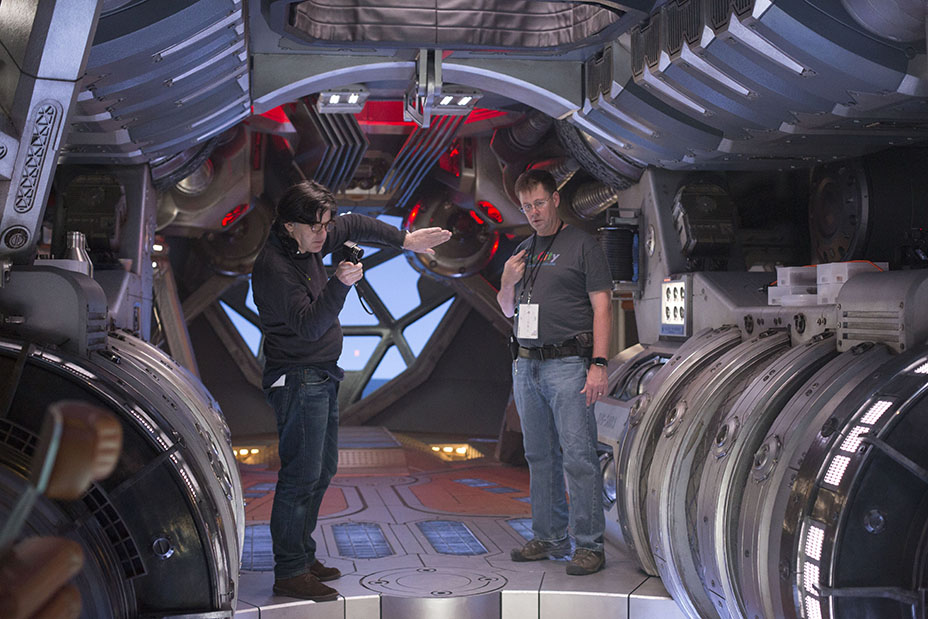 How did you deal with that dichotomy?

I was very keen to find a way of filming so the physicality of the equipment and the cameras didn’t get in the way of getting in amongst the actors and capturing that spontaneity. Which is why we worked with RED in California to work on their 8K camera, which is a very large format chip. But the camera is not much bigger than the [handheld] Hasselblad — and also I had to think about the ways to move the camera that are not conventional. The traditional ways of moving a camera — you put it on a crane or a dolly and that’s great for big-screen, especially Imax. And on the other hand, hand-holding the camera is great for being in and amongst the action, but it can be too much sometimes on the big screen. It has its moments. There’s quite a lot of handheld actually in Guardians. Then of course, Steadicam has its own language and voice and it’s very good, but it’s very specific. We were keen to work with something new and different and therefore, we worked with this this stabilization rig, which is somewhere between a dolly and hand-holding the camera. Images are rock-steady. It enables the camera to really get in amongst the action and the performance but have a very, very low footprint. It creates a very immersive, connected experience for the audience, rather than something that is a bit more removed. 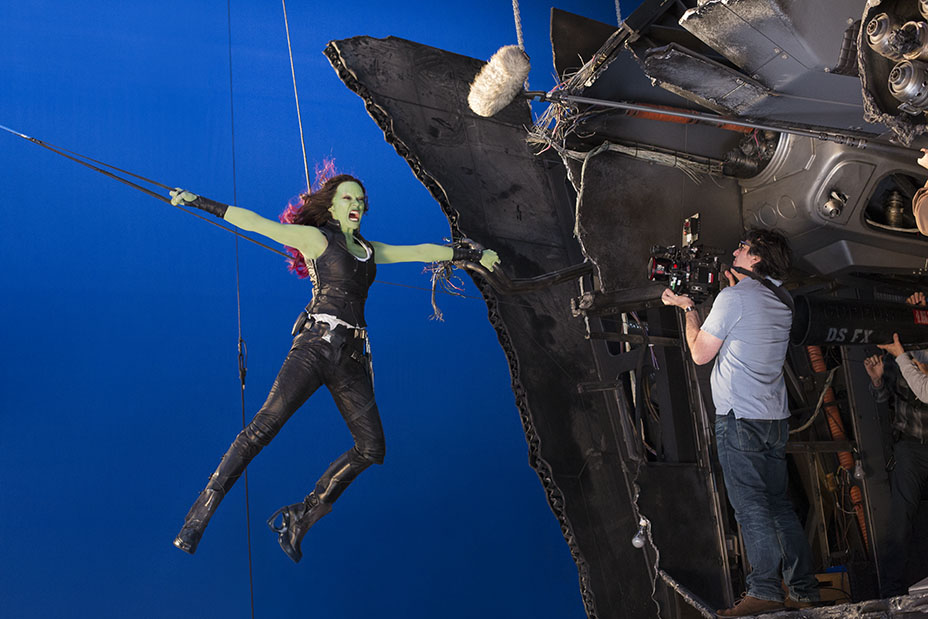 Do you remember a specific moment that was helped by the fact the camera wasn’t in an actor’s face?

I think the whole movie is helped by the fact that the actors aren’t rooted to the floor. They are not bound by restrictions of technique, they’re not bound the restrictions of, “You can’t walk here, don’t come beyond this point.” We specifically set out to be very fluid in the way we filmed this. As James explored the performances of the actors, the camera could go wherever the camera needed to go and wherever the actors needed to take the camera. Interestingly, we would rehearse very, very little. We’d almost go straight into shooting a scene and I think that helps, because the actors are fresh. They explore the performance in a different way. I had to think about a way of enabling that to happen. Nobody would want to compromise the movie looking great, but at the same time there’s a collaboration between the camera and the cast. It’s not restricting the cast in any way. 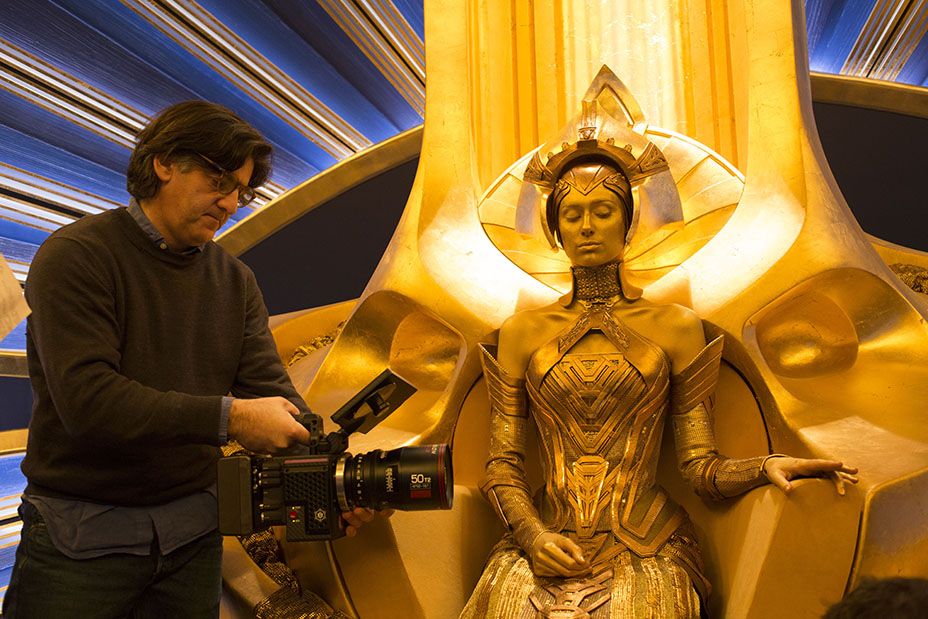 There were a lot of beautiful sets you got to shoot on. Any that particularly stand out to you?

The Ravagers sets work really well. They were difficult to do because they had opposing ideas. On the one hand, they are grungy, and on the other hand, they need to be very colorful to fit in the movie. It’s a difficult design challenge for Scott Chambliss, the production designer. They are difficult to get the atmosphere right.

And the other thing that took us a lot of time to work out was what the interior of Ego’s spaceship was going got be. That’s a practical set. The idea is the inside is kind of a bone structure and the outside is kind of embryonic. In fact what that is, it’s 360 degrees of video projection panels. That’s what lights the scene. We tested all sorts of different ways working with that set and evolved the idea. The whole thing was completely enveloped in the kind of video screens from rock concerts. It evolved. f you are open-minded and open to being challenged, where you start and where you end up is really fascinating. Hopefully you end up in a better place, of course. 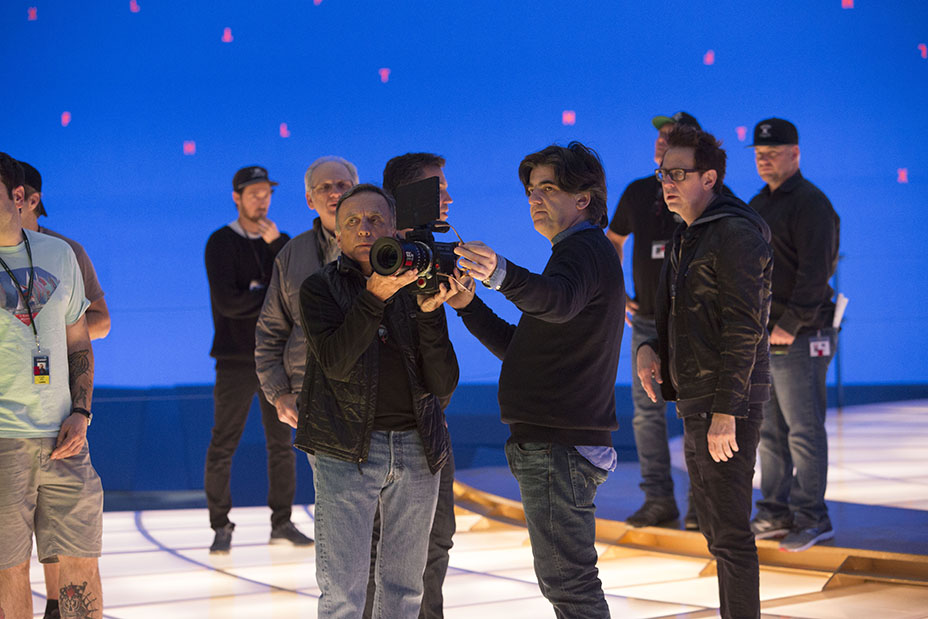 'Guardians of the Galaxy 2': What Those Last-Minute Cameos Mean