[Warning: This story contains spoilers for Guardians of the Galaxy Vol. 2.]

It’s just one throwaway exchange in Guardians of the Galaxy Vol. 2. If it were any other movie studio, it would be easily ignored — but this is Marvel, where hints and nods and Easter eggs can later unfold into something else entirely.

In discussing how he has his own planet, Ego (Kurt Russell) tells Star-Lord (Chris Pratt), Gamora (Zoe Saldana) and Drax (Dave Bautista) that he’s a celestial. “Small c,” he clarifies, when the subject of whether or not that makes him a deity or not is raised — which is something that may or may not be important, depending on how you feel about punctuation.

On the one hand, it’s possible that the line was intended as a pun. Ego, being a living planet, is literally a celestial body, and has godlike powers to create life. “Celestial” as a description is a perfect description for him, all the moreso because of the double meaning. But on the other hand … well, let’s do a brief deep dive into Marvel’s comic book history.

In 1976, Jack Kirby returned to Marvel after years away at main competitor DC. In his first run with the publisher, he’d co-created characters like the Fantastic Four, the X-Men, the Hulk, Iron Man, Thor and the Avengers, so expectations were high for what he’d do upon his return. He certainly didn’t set his ambitions low; his new series — which he would write and draw — was initially titled Return of the Gods, and would center around the arrival on Earth of an ancient alien race responsible for the creation of humanity. 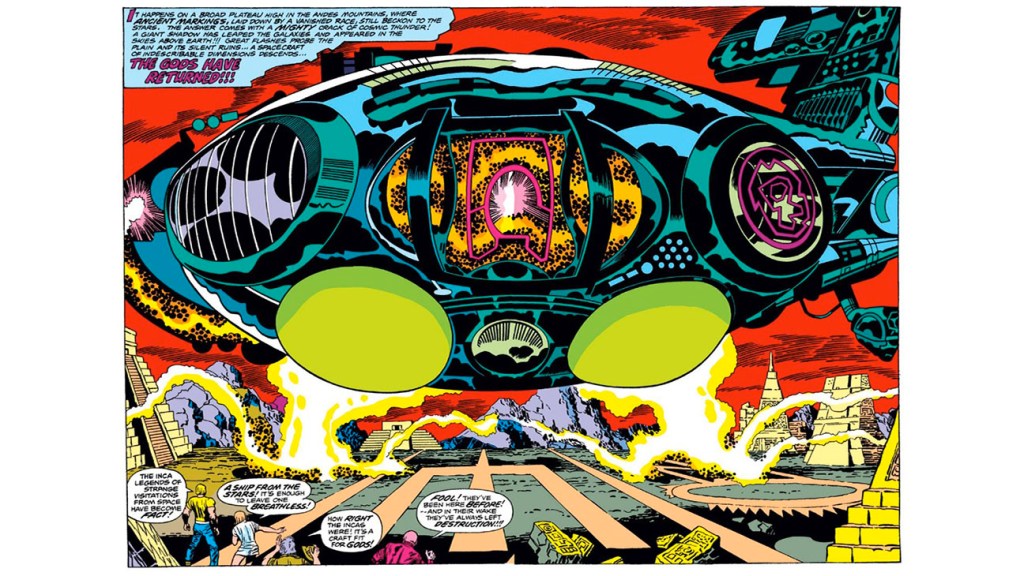 When the series eventually was published, it had undergone a title change to The Eternals, in reference to another race created from the same basic genetic stock as humanity. (There was a third race, called the Deviants, created at the same time; if the Eternals represented man’s best case scenario, the Deviants were humanity’s worst impulses made flesh.) The first issue set up the basic spine of the series, introducing the Eternals concept, and the idea that the space aliens were returning for some unknown reason … a reason which is explained in the second issue, in suitably melodramatic exposition.

“Arishem, leader of the Fourth Host, lands firmly upon the pylon,” the breathless caption begins. “He will stand upon it for fifty Earth years, towering like the surrounding mountains above all life below! And, on the last day of the fiftieth year — he will step from the lyon — and on that day, Earth will live — or die!”

The collective name of the alien race Arishem belongs to? Of course, it couldn’t be anything else: the Celestials. Or should that be with a small c? After all, “humans” doesn’t have an upper case first letter…

Celestials have shown up in a number of Marvel comics outside of Kirby’s Eternals, which was cancelled long before Arishem had time to make up his mind; indeed, the comic book Guardians of the Galaxy had a brief period where their headquarters was, in fact, inside the severed head of a Celestial, which wasn’t quite as inactive as it might have appeared. And in the 2014 Guardians movie, a large chunk of it took place in Knowhere, a mining colony that was inside the head of a dead Celestial.

So … is Ego a celestial like Marvel’s comic book celestials? The comic book version of Ego isn’t; he’s entirely unrelated to them. But if the Guardians movies continue to scale up with each successive installment, it wouldn’t be too outlandish for them to eventually face the aliens responsible for jumpstarting humanity. Could writer/director James Gunn have been laying the groundwork for that battle in a short exchange in Vol. 2? It’s certainly possible … or perhaps it’s merely the product of too much fevered speculation.

'Guardians of the Galaxy 2': What Those Last-Minute Cameos Mean