[Warning: This story contains spoilers for Guardians of the Galaxy Vol. 2]

If you asked me about the Marvel Cinematic Universe two years ago, when Avengers: Age of Ultron was in theaters and Phase Two was reaching its end, I would have told you that it was a bubble due to pop. After all, how could the sprawling MCU possibly be sustainable?

But when I saw Captain America: Civil War, my feelings started to shift. Then came Guardians of the Galaxy Vol. 2, and suddenly, it all clicked. I’m now convinced that the MCU had tapped into something that could keep it going strong indefinitely: an ability to convincingly create a sense of familial bonds and use these bonds as the emotional core of its films. With Guardians, it focused on family, rather than the romantic subplots that were front and center in early MCU films.

Just think of the MCU Phase One films — in Iron Man, Pepper’s (Gwyneth Paltrow) “proof that Tony Stark (Robert Downey Jr.) has a heart,” or Steve’s (Chris Evans) missed date with Peggy (Hayley Atwell) in Captain America: The First Avenger. Relying on a romantic thread to provide both some heart and added excitement often works well in movies because of their condensed timeframe as opposed to a television series: take person A, add person B, let the tension simmer for a while over gentle heat, then turn it up at a time of your choosing and let it boil over; add other drama to taste. When attempting to use this formula in a longer-running format than a film, certain issues make themselves apparent — if the tension is left to simmer for too long, it simmers down to nothing; if it boils over too soon, well, there goes the excitement. (Ironically enough, Chris Pratt’s Peter Quill alludes to many of these dilemmas in a running gag in Guardians 2.) 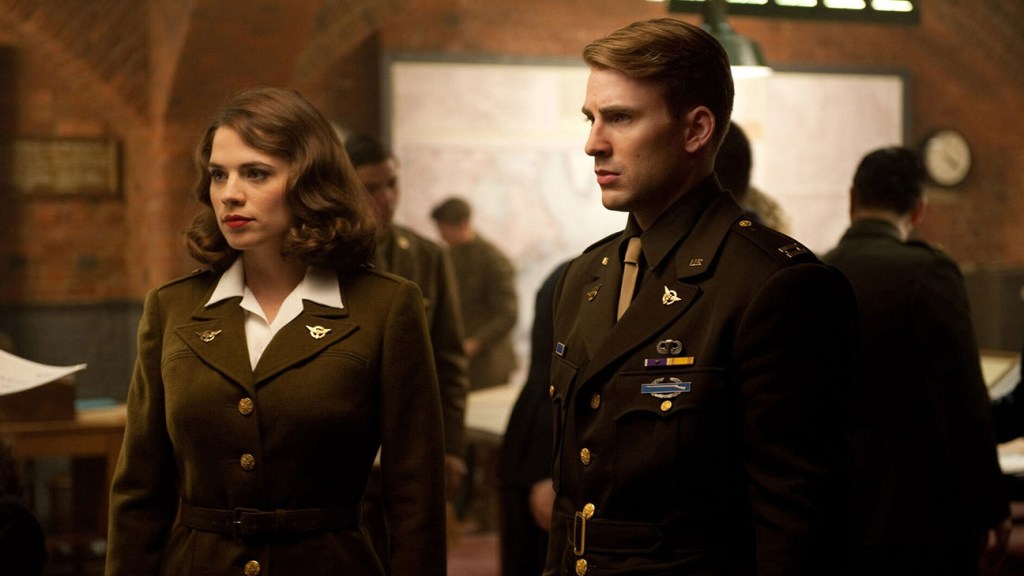 The thing about that, of course, is that an MCU movie isn’t really self-contained; it’s part of a vast network of sequels and tie-ins, so all the problems mentioned earlier more quickly pile on. The MCU showed considerable growing pains in this regard during Phase Two, struggling with two interconnected but ultimately separate questions.

One: How do you fit love interests into the equation when already dealing with so many characters and plot lines?

Two: How do you give a film emotional depth without it taking away precious time needed for fight scenes and witty banter and showing off cool new toys?

The MCU’s struggle with the first question can be most quickly illustrated by simply looking at the almost comically similar designs of these posters for 2013’s Thor: The Dark World and Iron Man 3, which both scream, “We think the love interests should be important, but we’re not quite sure what to do with them any more.” In regard to the second question, the movies of Phase Two are all over the place as far as the possible answers, or non-answers, they provide. Winter Soldier pulled on the brother theme with Bucky (Sebastian Stan), but also gave Peggy and Steve a reunion while introducing her niece Sharon Carter (Emily VanCamp) as a possible love interest. Thor: The Dark World reintroduced Jane Foster (Natalie Portman), though the MCU just as quickly abandoned her. Moving into Phase Three, though, trends appear to be developing in regard to how the MCU handles both of these concerns. 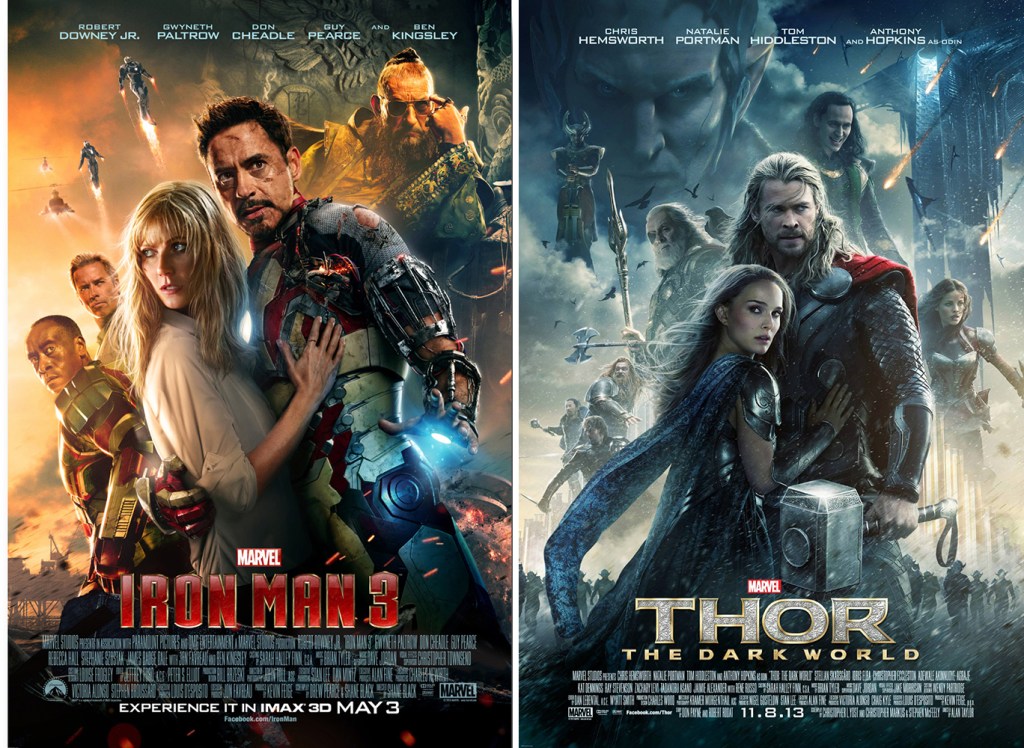 Regarding the matter of love interests, they have turned into the narrative equivalent of an appendix or wisdom teeth in the MCU. They don’t really have a function any more, but they’re still included in the standard package in a somewhat minimized, peripheral form. In Captain America: Civil War and Doctor Strange, this is arguably true of the protagonists’ love interests as characters (VanCamp’s Sharon Carter and Rachel McAdams’ Christine Palmer, respectively). In the case of Guardians 2, there’s a peripheral focus on Gamora’s (Zoe Saldana) — to use the exact terminology of the film — “unspoken thing” with Peter, which is somehow one of the hardest selling points in a movie full of fantastical worlds and CGI beings. At one point, Peter and Gamora debate the existence of this “unspoken thing,” and one can’t help but think that, in a way, they are actually both correct: Peter is right about there being some unspoken thing, but Gamora is right in the sense that the unspoken thing is actually that there is no chemistry between them whatsoever.

The reason that sidelining the romantic elements hasn’t spelled disaster for the MCU is that it has found a new emotional source to pull from — familial bonds, whether those be of the traditional, biological variety or the nontraditional, ragtag team kind, though the latter sort is increasingly dominating over the former. And yes, the MCU has featured a lot of key familial and pseudo-familial bonds over the years: Obadiah Stane (Jeff Bridges), the cutthroat businessman with a cold, shriveled lizard heart masquerading as a fatherly figure; Loki’s (Tom Hiddleston) adoption-borne identity issues; Steve and Bucky’s brotherly bond; the list goes on.

With Guardians 2, the MCU has gone from only occasionally dabbling in family themes or alluding, but not committing, to the idea of the various ragtag teams that populate its films as family units to fully embracing the concept. In doing so, it has tapped into a reservoir of potential excitement and emotional depth. In a particular sense, emphasizing this “family feeling” can, in terms of narrative, fill a similar role to that of a central romantic pairing (no, not like that, this isn’t Westeros). That is, it can also serve as a useful narrative scaffolding and as a source of emotional appeals, and it brings along some decided advantages: it’s a lot easier to fit more characters in a familial web than even the most complicated of love triangles/quadrangle/polygons, leaving a much bigger number of permutations of character dynamics to work with. In other words, it makes it a lot easier to keep things exciting.

This actually isn’t even a new argument, it’s one pulled from the writings of G. K. Chesterton, who stated the following in his 1905 essay collection Heretics:

More and more, the MCU seems to be aligning with Chesterton’s way of thinking. Chesterton was admittedly thinking about family in a rather old-fashioned sense, but considering he was writing more than a hundred years ago, he can be forgiven for that. Though he falsely presumes a genetic prerequisite for inclusion in a family unit, his other points are right on the money for the MCU. In fact, Captain America: Civil War and Guardians 2 can practically be seen as proofs of concept for Chesterton’s essay: Families are not harmonious units, but rather anarchic states, and that’s what makes them so exciting. 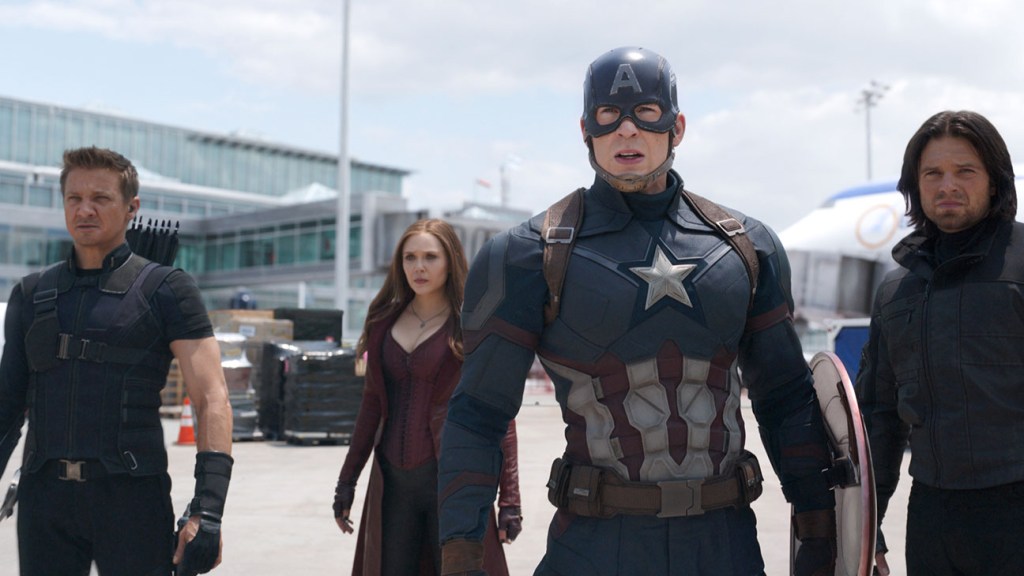 What makes Civil War’s airport battle, for example, one of the MCU’s greatest fight scenes is that it has not so much the dynamic of a traditional heroes vs. evil army of spies/aliens/robots/etc. as that of a family reunion. Take Bucky, for instance, who plays the role of the controversial “plus one” who almost everyone hoped against hope wouldn’t be invited this time around.

While Civil War alludes to the idea of the Avengers et al. being a family in this sense — in other words, a group of people brought together by forces outside of their control but who ultimately (for the most part) do not want to see any major harm come to each other in spite of the in-fighting that so often ensues — Guardians 2 drives this point home, while also unabashedly trying to play every single emotional angle possible. Fatherly betrayal and fatherly sacrifice are two of the oldest tropes in the book, but managing to feature both of them in the climax of the same film involving one character and two different father figures is admittedly inspired.

On the whole, Guardians 2 follows a rather common pattern as far as sequels go. It’s got the same basic components as the first installment, only it seeks to go bigger and bolder, and it generally succeeds. In fact, the aforementioned scene of fatherly sacrifice, in which Yondu (Michael Rooker) sacrifices himself to save Peter, parallels Peter’s near-sacrifice to save Gamora in the first Guardians of the Galaxy in its use of a two-people, one-spacesuit gambit. But while the first attempt comes off as a somewhat campy slight tug at the heartstrings, the second variation manages more of a somewhat campy punch to the gut. Maybe it’s that familial bonds actually do have greater emotional impact potential than romantic ones (Logan, anybody?), or maybe it’s that the MCU has just figured out how to work with them better. 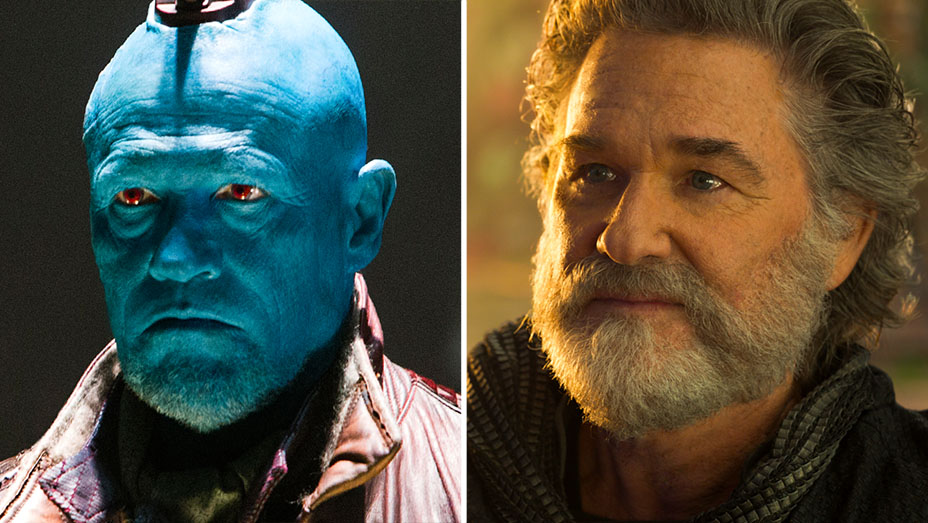 Another way in which Guardians 2 embraces a ragtag-team-as-family concept beyond anything before encountered in the MCU is in going truly intergenerational with the inclusion of Baby Groot, one of the film’s greatest strengths. While he’s adorable and entertaining enough on his own, the simultaneously very familiar (at least, for anyone who’s ever had to deal with a small child before) and yet entirely bizarre interactions between Baby Groot and the rest of the gang are what truly make him the movie’s best not-so-secret weapon.

Later this summer, the MCU’s next outing, Spiderman: Homecoming, is being marketed in a way that suggests Marvel plans to keep going with this intergenerational trend. The second trailer in particular upgrades the cool-estranged-uncle vibe of Tony Stark’s interactions with Peter Parker (Tom Holland) in Civil War to more borderline-dad status, complete with hypocritical, “I’m disappointed in you” lecture (“If you’re nothing without this suit, you shouldn’t be wearing it,” is quite a statement coming from Tony Stark).

Will the MCU truly embrace the team-as-family? When Spider-Man swings into theaters once more, we’ll likely have a better idea. And who knows? Maybe down the road, Marvel could even figure out how to make love interests relevant again. Hope springs eternal.

Guardians of the Galaxy Vol. 2 is in theaters now. For more, check out what those last-minute cameos mean — and our interviews with Sean Gunn, Michael Rooker and cinematographer Henry Braham.

'Guardians of the Galaxy Vol. 2': A Digital Kurt Russell and Other VFX Tricks Revealed