Continue to The Hollywood Reporter SKIP AD
You will be redirected back to your article in seconds
Skip to main content
December 6, 2016 4:37pm
Logo text

This weekend’s Guardians of the Galaxy Vol. 2 trailer featured all the characters fans had wanted to see more of: the wisecracking white dude with the disappearing helmet, the green woman with knives, the talking raccoon and the woman with antennae who can sense emotions with touch. Wait. Who was that last one?

The woman in question is Pom Klementieff, playing Mantis — a character with a particularly unusual backstory, even for superhero comics. Created by writer Steve Englehart (and initially drawn by Don Heck), Mantis debuted in 1973’s Avengers No. 112 as a sidekick — and perhaps more — to a reformed villain called the Swordsman. Initially portrayed as an untrustworthy figure, her destiny as intended by Englehart was something far grander…with what followed that proving to be even stranger.

As the result of a long-running arc later referred to as the “Celestial Madonna” storyline, Mantis came from humble beginnings (She met the Swordsman while working as a prostitute in Vietnam, although it’d later be retconned that she was actually the daughter of a wealthy businessman-turned-supervillain) but would be revealed to be the Celestial Madonna — a cosmic entity described at one point as “the most important being in the universe.” 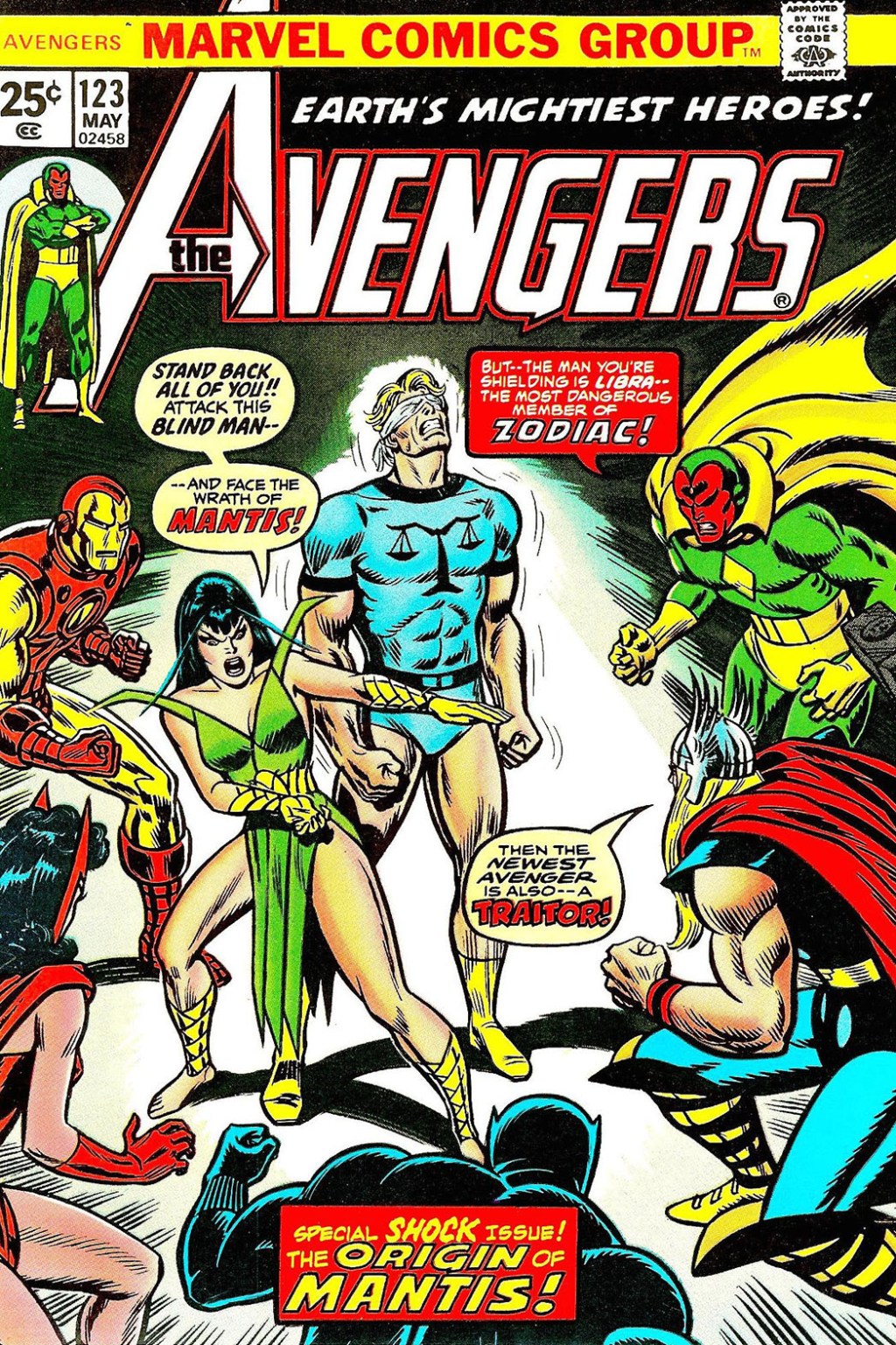 What that meant in practice was that she would marry an alien tree that took the form of the Swordsman — who, by this point, was dead — and leave Earth to go and mate with said alien tree and raise their child. So far, so happily ever after, but things got strange when Englehart left Marvel for competitor DC.

In an unusual move, Mantis followed Englehart between companies. Technically, and for the purpose of any lawyers out there, it wasn’t actually Mantis who appeared in 1977’s Justice League of America No. 142, written by Englehart with art by Dick Dillin; it was “Willow,” a similar character who shared Mantis’ tendency to refer to herself as “this one,” and who declared that she “has come from a place she must not name!”

As Willow, Mantis explained that she was indeed pregnant, but had returned to Earth to give birth to her child — one who would “be the first of a new race — the bringer of renewed life — the life that will lead all humans to the stars!”

That Justice League issue would be Willow’s sole DC appearance, but she had another extracurricular appearance before she would make it back to the Marvel universe: a character called Lorelei — a second nom de guerre for Mantis — would appear in 1983’s Scorpio Rose No. 2, an independent title written by Englehart with art by Marshall Rogers. By this point, she had a son accompanying her — a son who, upon her reappearance in Marvel’s Silver Surfer No. 4 (1987), would be handed over to his father’s alien race to raise, while she set off into space alongside the Surfer.

That wouldn’t end well; she would apparently die six months later, only to return within a number of months and recur in two separate titles written by Englehart before he left Marvel for a second time. Her next major appearance — discounting a villainous turn in a 1990s storyline later abandoned by Marvel and explained away as time-travel-gone-wrong — would be in a 2001 series titled Avengers: Celestial Quest, in which Thanos declared war against Mantis and her son. (Everything, thankfully, ended well.)

From there, Mantis disappeared for a few years, before reappearing in the 2007 Annihilation Conquest: Star-Lord miniseries that tied into the storyline that would create the contemporary incarnation of the Guardians of the Galaxy. Mantis served with the group for a number of years as a counselor of sorts, using her empathic nature to help the team off the battlefield. In recent years, she’s become estranged from the team, although that is likely to change as the Guardians of the Galaxy Vol. 2 — and her starring role therein — comes closer.

Whether or not the onscreen Mantis will have a life as unexpected as her comic book counterpart’s seems unlikely…but if Zack Snyder and the team at DC Films were on the ball, they’d make room in Justice League for a Willow cameo, just in case.