Continue to The Hollywood Reporter SKIP AD
You will be redirected back to your article in seconds
Skip to main content
May 18, 2019 6:15am

Gully is an intense and surreal film about trauma, violence, rage, mental illness, humanity and the circle of abuse. But to Charlie Plummer, Kelvin Harrison Jr. and Jacob Latimore, who play the starring trio of best friends, the dystopian Los Angeles-set drama is also a story of friendship.

“There were some very poetic moments where we’re just trying to find the beauty in life,” Latimore tells The Hollywood Reporter. “The relationship the three of us have, we realize that we really only have each other. Everyone’s families, no one has a real solid foundation. We are family.”

Elderkin, speaking to THR when Gully premiered, described the film’s arrival to the screen as a full-circle journey. Five years ago — before producer Brad Feinstein and his Romulus Entertainment came on to finance — Elderkin was at the nearby downtown Bowery Hotel when he was handed the script from Marcus J. Guillory. “I had been reading a lot of scripts at the time, just to get acclimated into the narrative world, and I felt immediately like I needed to make this film,” says Elderkin of his jump to making his first movie after a decade of memorable music videos and photography (frequent collaborators include Kanye West, Kendrick Lamar and Scott). “I felt so much emotion and the things I felt were brought out in this magical way in this script of humanity and circle of abuse.”

Gully follows Calvin (Latimore), Nicky (Plummer) and Jesse (Harrison Jr.), three disaffected teens who are all victims of extreme childhoods and who, when abandoned by everyone else, form a brotherhood. The results of their respective traumas manifest in different ways, including Jesse living a near-silent existence, with his evolving story offering the most powerful punch of the film. The three stars spent all their time together during shooting to “figure out those early years so we could get to this point where we do have a language that’s unspoken,” Harrison Jr., who didn’t speak for a week before filming began, tells THR.

Hyper-influenced by violence in society, the trio escape through video games and drugs and a series of events culminates in an evening of horrific proportions as the friends wreak havoc without any consideration of real-world ramifications. What transpires is a level of violence that Elderkin admits was shocking when it came to selling the story: “It’s intense. A lot of people were interested. Some people were offended.”

But it was that script that drew all three actors to the film. “It’s definitely polarizing but it’s a film that takes risks,” Plummer tells THR. “Hopefully people will be able to see these kids as kids. I think that’s really important. This is the reality they’ve been dealt. Of course they have to be responsible for their actions but, at the same time, this is the world they’ve known since day one. You see it with each one of them that all the things they do and are a part of really do have a very profound effect.”

The truth behind the violence is why Elderkin wanted to make the movie. “We’re living in a world where people are so disconnected. There’s violence in every kind of film out there now that 13-year-olds can see. These kids [in the film] are totally desensitized. A lot of kids come from this circle of violence where it’s ingrained in their upbringing. I wanted there to be consequences for the violence.”

That idea is demonstrated in Scott’s one scene in the film, when the trio of teens immerse themselves in a violent video game and proceed to trash the store when Scott’s owner makes them feel threatened. “I would say that’s probably the most fun scene we did,” says Latimore of spending half a day tossing rows of DVDs around Scott’s character’s storefront. “In that scene, you really see the love we have for each other. We have each other’s back at all costs. It was awesome to just go crazy a little bit.”

Elderkin also credits Guillory for the authenticity of the traumas all three boys experience, including stemming from police brutality and sexual abuse. “Marcus has worked for years in juvenile delinquents programs and therapy. He had a lot of stories of first-hand accounts and a perspective on the situation. It’s something that he wrote but I feel I can understand,” says the director. “It’s a reality that trauma as a child comes out and when there’s nobody to reconcile or give you relief for this trauma, or you don’t have a way to express it, that’s a common thing happening in a lot of marginalized communities.”

Harrison Jr. says the beauty and darkness of the script opened his eyes to the “marginalization of a community that doesn’t get represented very often and the things we don’t pay attention to and how they have to deal with it without resources.” He adds, “I hope that people take away that this isn’t necessarily going to offer answers, but it’s a conversation-starter and that’s the beauty of independent film. What do we do with these kids? And how do we get them out of this?”

When asked to describe Gully, Elderkin says, “If something is gully, it’s raw. But this film is so many different things. It’s chaotic. I could write five or six different descriptions.” He then adds, “It is kind of the voice for the voiceless.”

That summary holds true for one of the main characters, specifically, by the end of the film. But on a larger scale, L.A.’s homeless epidemic, and one man near the 10 Freeway in particular, helped to inspire Howard’s all-knowing character in Gully, a homeless man named Mr. Christmas who offers commentary on the neighborhood events as they unfold. “There’s a guy on Crenshaw Boulevard who writes these beautiful signs about using your art. He doesn’t ask for money. He just stands there and tells everyone to have a positive day. There’s something, I guess, God-like in that he has something deep and special to say and I think there’s a lot of people out there like that,” Elderkin says. “There is not one bridge in L.A. that I don’t see a community of people living under. I’ve stopped and talked to them and it’s heartbreaking. What if someone has such an amazing voice that you look at every day and you never stop to listen to or give a chance?”

Ultimately, Elderkin hopes that Gully can serve as a cautionary tale that inspires “trickle-down positivity” by showing how one positive act can effect change.

“I didn’t want to shock people in this film, but I wanted to shock people in this film,” he says. “I wanted people to really get pushed to their own emotional points so that you could maybe get a glimpse into why some people are how they are or live how they do, or see how privileged a lot of people are compared to others. I want people to feel empathy, to feel more connected and to look at other people in their daily lives differently. Our tunnels are getting smaller and smaller. And one moment of just looking and seeing somebody and maybe understanding what someone is going through can make an impact.” 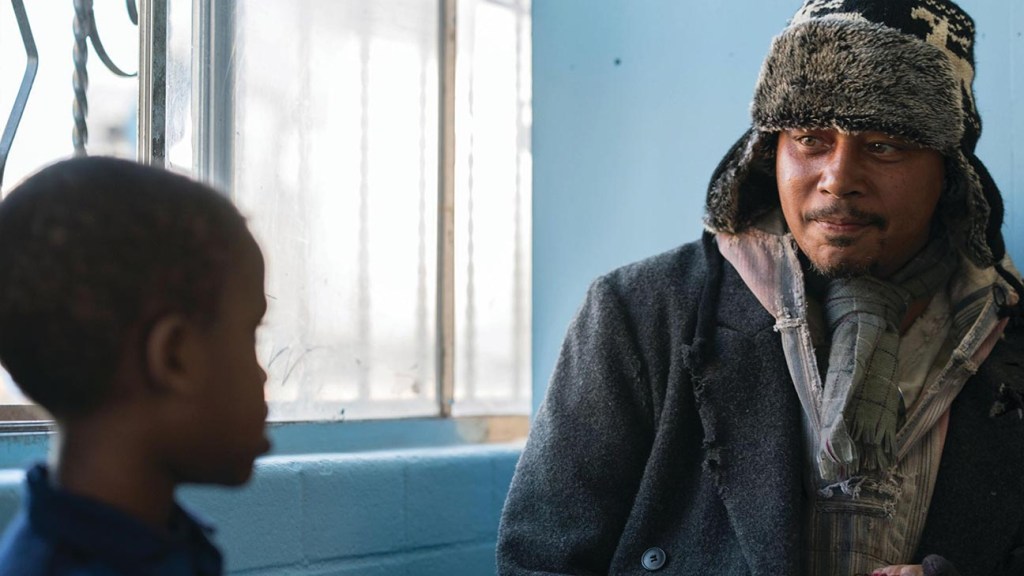