There is a rough poetry to the films of Gus Van Sant, a seedy desperation in the ruins that Keanu Reeves and River Phoenix call home in My Own Private Idaho, the gloomy motel rooms of Drugstore Cowboy, the stifling suburban ennui of Elephant — everyday environments yielding a hidden beauty to the filmmaker’s camera. His own environment is a house in Los Angeles’ Los Feliz hills, overlooking the Hollywood sign and the Griffith Observatory. The latter turns up in a new series of arresting watercolors painted by Van Sant for his first New York solo show, “Gus Van Sant: Recent Paintings, Hollywood Boulevard” at Vito Schnabel Projects, Sept. 12 through Nov. 1.

A naked colossus stalking Hollywood Boulevard towers over the Capitol Building in Untitled (Hollywood 4). In Untitled (Hollywood 16), a nude kneels beside a parked car. “I noticed there were a lot of naked figures and they were kind of golden and I realized they resembled the Oscar, cause they were muscular and Atlas-like. So, I thought maybe that’s what it is, but I’m not sure,” says Van Sant.

Rendered in pale pastels accented by splashes of vivid color, his series of large-scale watercolors on stretched linen offer abstract figurative combinations of male nudes dissolving into impressionist cityscapes of Hollywood and L.A. With his first New York show, it’s easy to assume Van Sant has only recently taken up painting, but he studied fine arts at the Rhode Island School of Design in the 1970s before changing his major to filmmaking. He has maintained his practice through the years with solo exhibitions at Le Case d’Arte in Milan, the Musée de l’Elysée in Lausanne and the Jordan Schnitzer Museum of Art at the University of Oregon in Eugene, among others. In 2011, he presented watercolor portraits along with works by James Franco at Gagosian Beverly Hills.

“What I see in Gus’ different bodies of painting, whether it be the silkscreen or the watercolors, his hand is very much in all of those,” says gallerist Vito Schnabel, the son of artist/filmmaker Julian Schnabel, who has exhibited work by crossover names like Laurie Anderson and Tom Sachs in addition to Van Sant.

Only once has a work by the filmmaker appeared in his movies — the painting on the wall in Robin Williams’ office in Good Will Hunting, for which Williams won his Oscar. It was written into the scene and Van Sant and other artists attempted to render it, with the director ultimately choosing his own work to be on camera. In the end, he gave it to Williams to add to his prodigious art collection. (The painting was auctioned by Sotheby’s in October 2018, along with much of the late star’s art collection and film memorabilia; it sold for $90,000.)

Van Sant first met Vito in an airport when the latter was still a boy. Vito was with his father and producer Jon Kilik, returning from Cannes after showing Basquiat, and they were held up on a layover when Kilik invited Van Sant to join them. Ten years later, when Schnabel was at Cannes again with The Diving Bell and the Butterfly, Van Sant was there to assuage him.

“He was upset because the award they had won, it wasn’t the Palme d’Or, it was best director and he was a little bit upset. I said, ‘No, that doesn’t mean you can’t win it, you still have a chance!’ He was like, ‘I do?!’ It was like a moment for him,” Van Sant recalls. “I can’t remember if he won the Palme d’Or.” (He didn’t.) Last winter, Van Sant bumped into Vito at an airport and showed him images of his work. Within a few days they decided to move forward with a show.

Retiring by nature, Van Sant isn’t looking forward to being the center of attention, but of course he’s had lots of experience doing publicity for his films. Still, he thinks he’s not very good at it, at least not as good as Quentin Tarantino and Nicolas Cage, just two that he named, as well as the star of Alfred Hitchcock’s Psycho, of which Van Sant directed a poorly-received remake. “Tony Perkins, I met him one time and he was like, ‘I just don’t see what everyone’s complaining about. I love talking about projects.’ You want to get into that headspace like you love it, if you can. You might as well have a good time.”

Of course, having his first solo art show in New York doesn’t mean Van Sant is giving up his day job. He’s currently writing an adaptation of Michael Chabon’s short story, “Prince of Fashion,” for Amazon, an autobiographical account of the author attending Paris Fashion week with his son.

“The industry is changing right now. It’s probably way worse than the transition from silent to sound,” he says of the shift away from theatrical releases to streaming. “I always wanted Hollywood to change. Now that it is, I realize, oh, I am Hollywood. I’m not going to survive. What they would really like is an unending stream. A feature is an anomaly in the streaming world. They’re like, that’s cute, but what we really want is something that plays forever.”

If worse comes to worst, there’s probably a future for Van Sant in fine arts. Vito had been curating gallery shows for about 10 years before he opened Vito Schnabel Projects in St. Moritz, Switzerland, in 2015, two years after his space in New York. Famously seen on the arm of women like Heidi Klum, Demi Moore and Amber Heard, he has been suggested for a planned Bachelor-type reality series in the works at NBC. “Probably not for me,” is his response when asked about it. “Films have always interested me and at some moment that could happen,” he adds, raising the prospect of a third art/film world crossover.

For Van Sant, it seems easier for an artist to be taken seriously in the film world than vice versa. Julian Schnabel has successfully moved in both, winning some of the film industry’s highest accolades, but there are few examples of the opposite. “When you’re anchored to the world as a filmmaker, people are like, ‘Well, they’re a filmmaker.’ So their attitude is to disregard what you’re doing.” Van Sant shrugs and takes a sip of coffee. Gazing at the Hollywood sign across the ravine he adds with a smile, “But I’m not supposed to be saying that.” 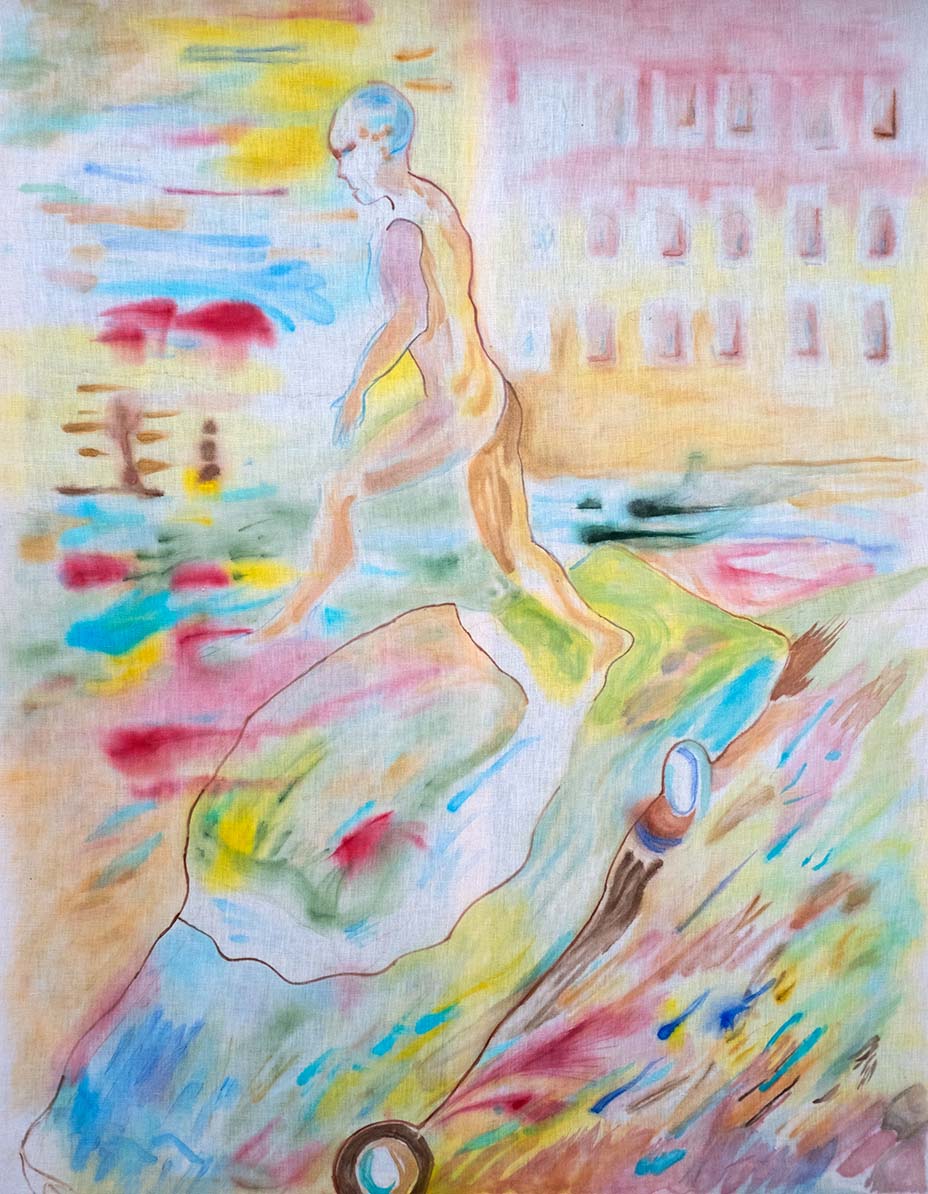