Halloween features one of the more arresting opening sequences of the year, and it only happened thanks to the tight purse strings of budget-conscious producer Blumhouse.

The scene shows a team of British podcasters (Rhian Rees and Aaron Korey) visiting Smith’s Grove Sanitarium in hopes of landing an interview with Michael Myers, the famed serial killer who hasn’t spoken a word since being locked up 40 years ago. The audience sees Myers chained up and standing in the sanitarium’s checkerboard-patterned yard. Soon one of the podcasters holds out Myers’ mask, and the intensity builds as other patients start to react to something unseen.

The moment was meticulously executed, but it wasn’t always planned that way. Director David Gordon Green and his team conceived of it just six days before shooting began in January after they decided to scrap an original opening sequence that would have picked up where the 1978 John Carpenter original ended. But that prologue turned out to be too expensive and cuts had to be made, leading to the introduction audiences are now seeing in theaters.

In a conversation with The Hollywood Reporter, Green also recalls ways the script was tweaked during filming, pressure-filled weeks of writing a script strong enough to convince Jamie Lee Curtis to reprise her role as Laurie Strode, and how the abandoned prologue made it into the film’s climax. Read the full conversation below.

That opening sequence is one of the more interesting ones of the year. How did you craft that?

Up until production, the opening was going to be a prologue that gave us some context of our narrative. It was going to back up in time: 1978. As we were approaching production and we had 25 days of principal photography schedule in front of us, it wasn’t going to make sense. We had to do all this period re-creation and specific stuff that became too daunting considering our short shooting schedule. So we had to come up with something really quickly.

I’ve been making indie movies for 20 years, so it’s not unusual, but it’s funny making a movie now that has this big-studio profile and support and campaign, but if you put us back in time in January where we are like, how is it even possible to film this in that number of days? I was confused and upset that I didn’t think we could accurately achieve this prologue. We did have this really cool location we found that had this weird checkerboard courtyard, and we were going to meet Michael. We just came up with a heightened environmental atmospheric opening that was going to be inexpensive.

I would have guessed that was the plan all along.

Probably six days out from starting photography is when that opening came up. 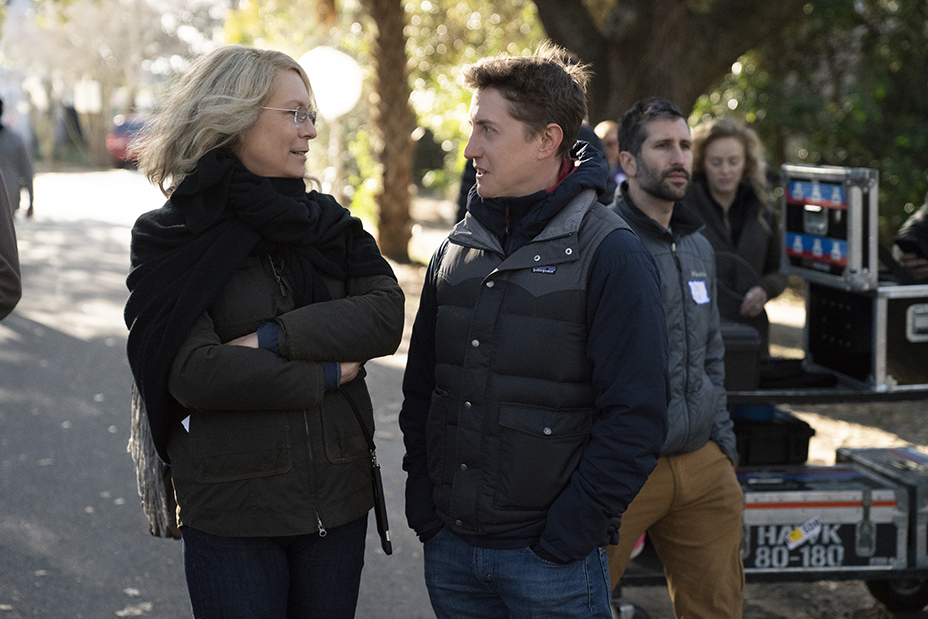 We thought that way, but we just couldn’t come up with what it would be. So we stopped thinking that way. We made all these lists, and we couldn’t figure out who it could possibly be, so we just decided, rather than spend the energy trying to jam another name into that role, let’s just put 100 percent of our efforts into getting who we want.

This movie is somewhat like Creed in the sense that you have original talent involved, but you also need it to have a fresh voice. How did you balance listening to advice from Jamie and John Carpenter while also making it your own?

Once [co-writers] Jeff [Fradley] and Danny [McBride] and I were excited about what we wanted to do, it was important to get John on board, and his voice was invaluable. He was the voice that said, “You don’t need the prologue, trust the audience.” He certainly knows the DNA of this universe and these iconic characters more than anyone, and he has seen what’s happened over the years and the various detours and tangents some of these characters have taken, and he has a perspective on that, and it was important to me, just on a cosmic level, that he be there to navigate us. I’m always looking at every job I do as a student, not a teacher. And I want to surround myself with people I can learn from. On Halloween, it’s first and foremost, I want to learn from John Carpenter. Secondly, I want to work with Michael Simmonds, the DP, whom I’ve really respected and has shot some great horror movies. I want to surround myself with Timothy Alverson, a great horror editor, and I’m going to learn from these guys because I’m scared as shit going into making this movie. If I don’t surround myself with smart people I can learn from, what am I doing with this opportunity?

What did you learn from test screenings or the editing process?

The editing process is so fun on something like this. On a horror movie, you are experimenting with surprise versus suspense and music versus silence and those types of things, but you really learn once you get it in front of people. I probably did a dozen screenings with audiences. I’m slightly neurotic, trying to birth not only my first horror film but one that brings us an extraordinary amount of baggage with it. With that baggage is opportunity.

It was learning about pacing, learning about the balance of gore, when is too much, when is not enough, when you want to use your imagination and have the kill happen off camera versus the deliciousness of an on-camera sequence. And I really let the audience lead the way in that conversation. We could do a restrained version where it was all in your imagination, and it didn’t feel as fun, and you could do a version with a lot of exposition and telling everybody what everybody’s motivation was, and it didn’t feel as fun. Then when you find the line and give everyone just enough to let their imagination fly but then, when they are least expecting it, slam something in their face that they’re not expecting, then that’s super fun to see the excitement and engagement of an audience for a scene of suspense. How long can you sustain tension? How long can we not know Michael Myers is hiding? When is that tension used to advantage, and when is it just exhausting? I can’t personally learn that sitting in an editing room. I want to see it as big and loud and with as many people I can wrangle to watch it and experience it for the first time, because they’re not going to lie. 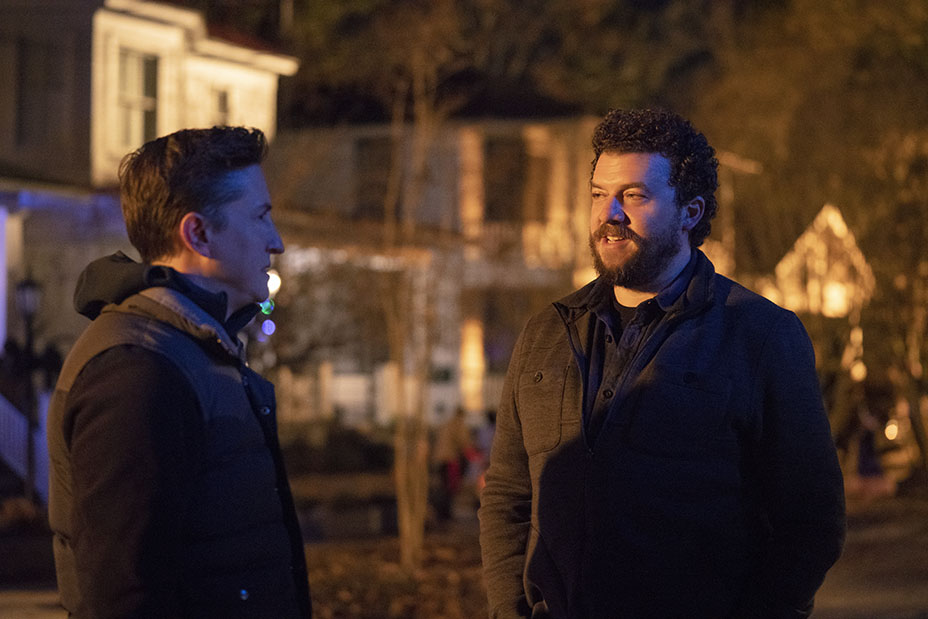 You come from a comedy background, and this movie does have some pretty unexpected funny moments. How’d you find that balance?

Danny and I were really self-conscious about making sure there was no humor in this movie. There was nothing funny on the page. And then we get into the casting and the rehearsals and the production of it, and people are funny, and there’s wit, and there’s an alternate line or this kid who is being babysat and he talks shit, and it’s hilarious. Then you are in the editing room thinking, “Do we indulge ourselves?” So you let the audience, you put some of it in and say, “Hey, is this a good kind of tension breaker or is it distracting?” with those kinds of things that are starting to appear.

There’s a great scene where Laurie has an emotional breakdown at a restaurant. It’s not the kind of thing you’d expect from these movies. What was shooting that like?

It was very loose and improvisational. There’s not much in that scene that’s scripted, I will say. In the script, it was a little more bombastic, and I think she broke something. There was more of a physical meltdown and less of an emotional meltdown. Very often in the rehearsal process, Jamie would come to me and say, “I’m feeling this should be more internal,” and I agreed. A lot of times as a writer, you write people to say what they’re feeling, just knowing that the reader, the actor, can start to interpret things, and then less is more on the day. If I remember correctly, that was a big day of less is more.

It was also the day that she goes to sit down at the table and goes, “I was going to kill him.” That was the day that inspired us to back plot it a little bit and put a gun when she’s watching him. In the script she just watched him leave, but then after we shot that scene, since we shot out of order, obviously, we thought, “Oh, let’s put a gun there.” So she’s got a gun at the transfer when he’s leaving on the bus. It would sometimes inform even scenes that would take place previously in the narrative, because she would have improved something. That whole scene is improvised. They are talking about Cameron’s [Dylan Arnold] dad and peyote. When you get Toby Huss in a room, it’s hard to stay on script. So it kind of became fun. Toby and Judy [Greer] and Bill, the actor who plays Cameron, and Andi [Matichak], they were just kind of riffing on dinner table chitchat. In the script, there was a scene we couldn’t afford to do on the day, where most of these developments took place at the honor society ceremony, which then we had to cut for budgetary reasons, so that’s why we ended up improv-ing that scene, because we were supposed to get that content at the ceremony, where Alison [Matichak] was being honored. We even had that scouted and a location, but then budget and time wise it was going to be too squirrelly, to do so we just put it in the restaurant and let it loose.

Blumhouse productions are not known for having five-star accommodations for talent. Where did you stay while shooting?

The accommodations were, I lived at my house. There’s no trailers, there’s no frills and everybody is down and dirty, which is great. We started building that set for the prologue that I was telling you about. We had taken the measurements from the house, literally the house from the original film. We sent an art director there to measure the room from the climax of that film, the bedroom that Michael is shot off the deck, and we’d framed it up and we’d built half of it before we made the decision economically that we couldn’t afford to complete it, so then we translated that set into Laurie’s bedroom for the end of our climax. So it has a strange, subconscious mirror reflection of the ending of our film mirroring that film, which was an economic choice, not a creative choice, and it’s one that most people wouldn’t recognize the distance from the door to the closet to the balcony, but those that do, or even those that don’t, I think there is a subconscious connection there of having those sets mirror them that I’m excited about. Again, that’s a positive result of an economic hardship, and the Blumhouse model opens those corridors, those avenues. It was my production designer’s idea. “Rather than jam this climax in this tiny bedroom at the real house, let’s use this half-built set,” and it becomes this huge eureka. But it’s only out of economic necessity that that opportunity is discovered.

'Halloween' and What's Lost With a Reboot