A relentless talent, a creative visionary, a loving wife and mother devoted to husband Matthew and son Andros, and a life cut short by a “senseless” tragedy not seen in Hollywood in decades.

Alec Baldwin Sues to "Clear His Name" in 'Rust' Shooting

Rhine opened the program in front of hundreds of guests shortly after 6 p.m. with a moment of silence “to do with what you will as we gather together to offer comfort and strength.” She added that there will be plenty of time for “who, what, why,” but the purpose of the vigil was to focus on “an extraordinary young woman” and celebrate her life.

Rhine added that she and Lindley sat down Saturday with the Rust crew as well as Hutchins’ AFI colleagues. “We all stand together at this moment in grief and disbelief, and what we do with that will define us and define this moment.”

Somber scene outside for tonight’s memorial honoring life of Halyna Hutchins here at IATSE Local 80 in Burbank. Starts in a few minutes with several hundred gathered so far and dozens of media outlets. pic.twitter.com/Hn4idx5WIR

Lindley stepped to the mic next to read a statement from Matthew Hutchins that said, “The outpouring of sympathy from her many friends has been overwhelming, and we thank everyone for their kind and generous sharing of her images and stories of her life. Please take time to remember her and we will all work together to honor her memory, emulate her determination and creativity.”

And while Lindley said that he did not know Halyna Hutchins personally, he’s come to learn through conversations with friends, family, AFI teachers and colleagues that she was “beloved, respected, talented and loving.”

“She was one of us. She was part of the film family, passionate about the work and eager to succeed,” he explained at the event, held a day after another ICG 600 tribute in Albuquerque, New Mexico, and the creation of a GoFundMe to help her family with expenses. “I’ve heard a lot about her bright future, but what’s really clear to me is that she had a bright present. She had a husband and a son.”

Lindley said that the purpose of coming together is that it’s human nature to try to make sense of a tragedy “that is senseless.” In doing so, he urged attendees to “not let our grief turn to anger,” though even he was quick to point out what a tall order that can be despite the assertion that “no matter what we ever learn about this, it will never make sense.”

The sentiment was followed by Miller, who shared powerful remarks about Hutchins’ “unnecessary and untimely death,” likening the situation to the tragic death of Sarah Jones, a camera assistant who died on the set of Midnight Rider in a train accident in Georgia.

“The circumstances are not identical, but they are way too familiar,” said Miller, who added that the union gathered out of solidarity to other Rust crewmembers. “The idea that there isn’t time for safety is just wrong. The concept that schedule is more important than safety, or the budget is more important than people, is one that simply cannot be allowed to persist. If you’re on a set, and your crews are telling you that it’s not safe, listen to them.”

Like Lindley, Miller opened up on the complex emotions swirling in the wake of Hutchins’ death and what they signal about the pressures and vulnerabilities of life on set. “I’m afraid we are also gathered with some frustration and a little bit of anger. Anger that too often the rush to complete productions and the cutting of corners puts safety on the back burner and puts crewmembers at risk.”

He said Hutchins’ death serves as a reminder that “our fight to protect the safety of ourselves and our coworkers is never over.”

Hundreds here as the sun went down..everyone stayed after the 30 minute program to pay their respects to Hutchins. pic.twitter.com/2Sx64XWJGD

AFI’s Lighthill spoke next, praising his mentee for a diverse background and unique upbringing. “She once described it as being raised with reindeer out one window and nuclear submarines out the other,” he said of roots in the Soviet Union. Part of her skill and success at the conservatory was the ability to take criticism and notes seriously without getting defensive, he continued. He singled out how she took a project titled Hidden and elevated what could’ve been pedestrian by making it “dramatic and story appropriate.”

Lighthill closed by asking collaborators, peers and alums to let him know how he can better prepare those for the future to avoid disaster.: “What has happened on Rust should never happen.” He urged more conversations above and below the line about the addiction to long hours in the industry. “We need to start working normal days so we can have normal family lives.”

He also encouraged industry professionals to address the use of functional guns on sets. “There is no place for weapons that can kill on a motion picture set. Rubber guns are totally acceptable now and can be made to look as real as they need to.”

Mendieta Cordova was the final speaker of the program and she offered the most personal insights. She recounted how they became fast friends during their AFI days after meeting in August 2013. While standing in the registration line, Hutchins introduced herself and suggested they have lunch after discovering they both were studying cinematography.

The pair went out for tacos and pastries and a years-long friendship ensued. “That’s Halyna, a joyful soul who could strike up a friendship as easily as she could capture a beautiful image. She was luminous, and Halyna was everywhere. She loved to be around people. She wanted to be involved in everything. Wherever she went — whether it be a set, a party, a classroom, a living room — the world was brighter because of her energy.” 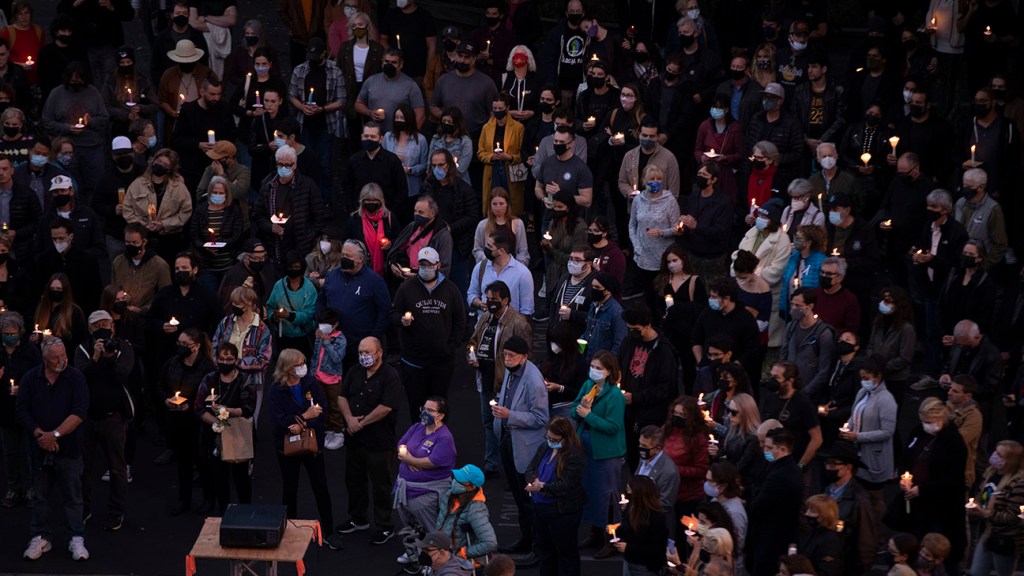 “She had an incredible ability to just manifest her vision for storytelling through perseverance and hard work,” Mendieta Cordova added, saying she will miss Hutchins’ kindness, laugh, generosity and unwavering friendship. “Everyone who was with her felt like they had her undivided attention. She always had my back, and now I want to continue to have hers.”

After the 30-minute program, attendees were encouraged to stay behind and comfort one another and they did, many lingering past 8 p.m. Dozens held candles, dropped off bouquets of flowers and hugged one another in the dark parking lot, lit up by a slideshow featuring a 360-degree look at Hutchins’ life. Images included on-set adventures, festival appearances at Sundance and Sitges, stylish outings and intimate family moments with her son, Andros, and husband, Matthew. The final slide showed Hutchins alone in profile, peering out a window with a message, “This should have never happened. You are missed.”

Sunday night’s vigil delivered a respite from the constant stream of headlines about the tragedy — how it happened, who is at fault and how it will impact an industry already deeply engrossed in conversations and transformative change regarding working conditions and on-set safety — and instead offered a moment for friends, collaborators, peers and the public to focus solely on Hutchins. By all accounts, she was a unique talent, a star on the rise in a male-dominated field and someone who deeply loved her craft.

Her life story is also singular. Born in Ukraine, Hutchins grew up on a Soviet military base in the Arctic Circle before going on to study international journalism at Kyiv National University in Ukraine. Per her personal website, she transitioned from university to working as an investigative journalist with British documentary productions in Europe. After moving to the U.S., Hutchins studied at UCLA and cut her teeth in production by working on a number of short films across a variety of disciplines on set including second unit, camera operator, gaffer and key grip before transitioning to cinematography.

She graduated from the distinguished AFI Conservatory in 2015 and was honored as a Rising Star of 2019 by American Cinematographer. In addition to Rust, her credits include Adam Egypt Mortimer’s art house superhero pic Archenemy starring Joe Manganiello, Cate Devaney’s The Mad Hatter, Sidra Smith’s A Luv Tale: The Series, Michael Nell’s Blindfire, Pollyanna McIntosh’s Darlin’ and Olia Oparina’s Snowbound. 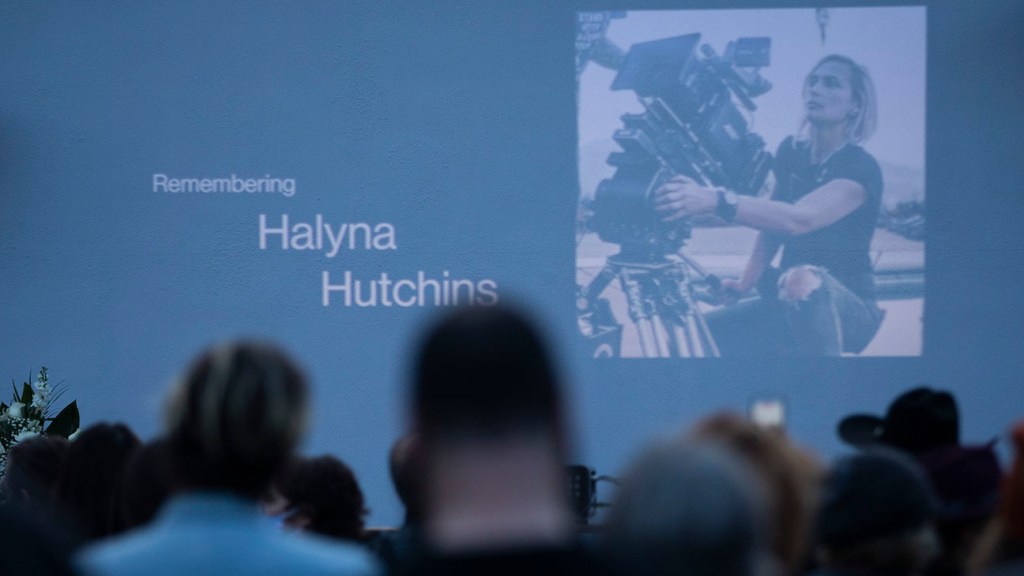 Hutchins was killed Thursday afternoon while prepping a scene inside a small wooden chapel at Bonanza Creek Ranch near Santa Fe, New Mexico. The Santa Fe County Sheriff’s Department confirmed that Hutchins and Rust director Joel Souza were shot when a prop gun was discharged by lead actor Alec Baldwin. Hutchins was flown by helicopter to the University of New Mexico Hospital, where she was pronounced dead. Souza was treated for his injuries and is now recovering.

For his part, Baldwin took to Twitter to share his “shock and sadness” regarding the “tragic accident” that took the life of Hutchins, someone he called a “wife, mother and deeply admired colleague.” He said he was fully cooperating with the investigation to address how it could have occurred. According to detailed affidavits from the scene, Baldwin was handed the firearm and told it was a “cold gun,” meaning it was empty and not a threat. However, it did contain live ammunition, per reports, and once discharged, it struck both Hutchins and Souza.

The investigation is ongoing. On Sunday, the Santa Fe Sheriff’s Office said it had executed two search warrants involving the seizure of photographs, video cameras, video recorded during the filming of the movie, computer equipment, firearms and more.