When Chris Sullivan showed up to his first day on Guardians of the Galaxy Vol. 2, he was prepared to play Taserface, a badass but humorous alien. He was prepared to be wowed by the sets and by the artistry. But he left work that day with something he wasn’t prepared for:  an offer for an entirely different project that would take him to the deserts of California.

That surprise offer came courtesy of Simon Hatt, a young Guardians producer who spent the day showing Sullivan around Atlanta’s Pinewood Studios, taking the actor through sets and costumes. The pair hit it off immediately, with Sullivan feeding off of Hatt’s enthusiasm and sense of wonder for the moviemaking process.

When the tour ended, Hatt offhandedly mentioned he was making a trucker movie, and that Sullivan should probably be his lead. Sullivan agreed immediately. When would they shoot?

“As soon as I’ve written it,” Hatt responded.

More than four years later, that project is a reality, with Hatt’s Hammer Down premiering at 2 p.m. today at the San Jose International Short Film Festival (register here to see it).

The writer-director worked his way up from assistant to directors such as James Gunn to producing roles on the Guardians of the Galaxy movies, Brightburn and the upcoming The Suicide Squad.

Before all that, Hatt grew up far away from movie making. When no one could babysit, Hatt spent days traveling his native U.K. with his brother and truck-driver father, who’d go on long hauls delivering furniture. Being a kid, sometimes Hatt imagined there was a pulpy, adventure quality to the job.

“Wherever you went, the ground was covered in oil and nuts and bolts and rusted pieces of metal,” says Hatt. “There would be an exchange of a piece of paper between my dad and a guy who was covered in tattoos. As a kid, who was watching a lot of Indiana Jones, I was like, ‘What are we into here?’ “

With Hammer Down, Hatt turned this unique assortment of experiences into a personal tale about a widowed truck driver who goes by the handle Hammer Down (Sullivan). Things get bumpy as he tries to care for his daughter Power Wheels (Abigail Dylan Harrison) while on a mission to deliver mysterious cargo.

“She’s such strong, brave female and she’s so vocal about her opinions that any girl would relate to that,” says Harrison of her character. To prepare, Hatt showed the young actor Paper Moon (1973), which she now counts as among her favorite films.

Hatt and co. filmed Hammer Down over a few days in the San Bernardino, California, area last December during The Suicide Squad‘s Christmas hiatus. He has spent much of the pandemic tinkering in postproduction remotely on weekends and during downtime from Squad.

To make time to do it all, Hatt took inspiration from indie filmmaker Morgan Dameron, who once was J.J. Abrams’ assistant and made progress on her projects while working on films such as Star Wars: The Force Awakens. Her advice to Hatt? Nights and weekends.

“Sunday became a religious writing day for me. Which it still is,” says Hatt.

Sullivan, who is best known for his work as Toby Damon on This Is Us, got physical for Hammer Down, which includes a big barroom brawl.

Hatt offered Sullivan a simple piece of direction for his fight scene: Imagine you’re Godzilla and you’ve just beaten King Kong, but you’re also a dad who has a bad back.

Sullivan believes that part of the secret sauce to Hammer Down is that Hatt grew up living and breathing things like Back to the Future and Indiana Jones — movies about mortal human beings who become heroes.

Still, there are echos of Hatt’s time in the Marvel Cinematic Universe in Hammer Down — particularly in the charming bickering between father and daughter. But there’s an even stronger pull toward the more human of heroes, the ones without any powers and who really hurt when they get punched. 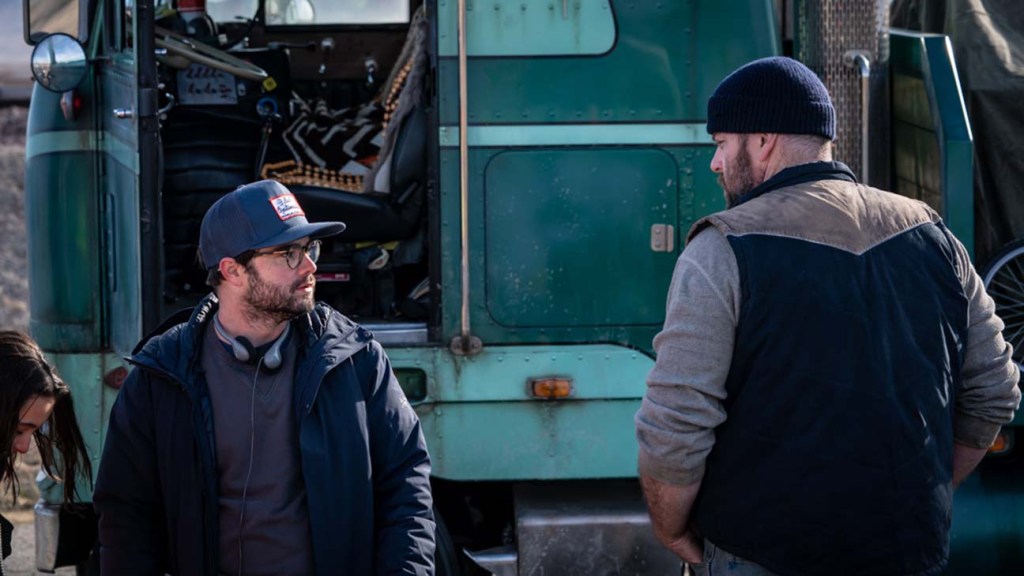 “In the very first [Mad Max] with Mel Gibson, he injures his leg,” says Hatt.  “Even in the fourth movie with Tom Hardy, that character is still wearing a leg brace … I just loved that continuation, that realism, that grittiness, that lived-in quality of those movies. That excites me. I could make three of these Hammer Down movies and they will be carrying the wounds throughout.”

Hatt has ambitions to continue the story, and already is working on a feature script, should he be called upon to make it.

“It’s big and it’s exciting,” Hatt says of his feature idea. “Part of the excitement for me is taking the idea of real people as superheroes and doing some world building around that. This world that is outside of cities. What’s that world that takes place in truck stops and old diners and oily warehouses and junkyards?”

Hammer Down is screening at the San Jose International Short Film Festival today at 2 p.m. in the Life Interrupted block. It will be available until the festival closes on Monday. You can register here to see it.

Updated to include a video of the short film.