[This story contains spoilers for Happiest Season on Hulu.]

“Right away I said, ‘I would like to play her. I would like that to be me,'” remembers Mary Holland of pitching herself to play Jane, the fantasy novel-loving, ready-to-please and overall black sheep of the buttoned-up Caldwell clan, as seen in new Hulu holiday movie Happiest Season.

The romantic comedy follows Harper (MacKenzie Davis) and Abby (Kristen Stewart) who, unbeknownst to Harper’s conservative parents who they are spending Christmas with, are a couple with Abby’s plans to propose to Harper run off track as they attempt to conceal their relationship. Holland is thrown in the middle of a massive ensemble of onscreen talent — which includes Dan Levy, Victor Garber and Mary Steenburgen — to play Jane, the sister to chronic overachievers Harper and Sloane (Alison Brie).

Holland— a performer at the Upright Citizens Brigade Theatre with credits across film and television — had a heavy hand in crafting Jane, pulling double-duty as the movie’s co-writer. She met the director and co-writer Clea DuVall while working on the HBO series Veep, with the duo later drafting the screenplay in just two weeks.

Ahead of the Happiest Season‘s Nov. 25 streaming debut on Hulu, Holland talks to The Hollywood Reporter about favorite holiday movies, the production-wide love for escape rooms and what she learned from Jane.

When you were writing Happiest Season, were you taking inspiration from any other holiday movies?

We both love Christmas movies— Home Alone, for sure, and Family Stone— these holiday movies are so influential. They are so important to us. You describe it as a hug; that’s exactly what it feels like. That’s why they keep returning, year after year after year. You have a strong rotation of Christmas classics that you just get so much comfort and joy from watching. So we really wanted this to have that same kind of spirit, while still also having a deep and strong emotional throughline and message.

What are your personal favorite holiday movies?

It really hands down has to be Home Alone. I love it so much. It was one of the first movie memories I have because I feel like I was maybe 7-ish when it came out. I had a huge crush on Macaulay Culkin. The whole world that is created with that movie — the hectic-ness of the holidays — it’s all so relatable and funny for that reason. That was something that we always really wanted to capture: let’s make these interactions with the family very real and something that everyone can recognize in their own lives.

When you were writing, did you have people in mind to play the characters?

It was important to both of us to have the characters in the writing process really stand on their own and be fully fleshed out. The one character that we definitely wrote for someone was Jane, because we knew very early on in the brainstorming of it when we were figuring out these sister characters that we wanted the middle sister to be a little eccentric. And right away I said, “I would like to play her. I would like that to be me.” We took some true details from me and wove them into Jane. 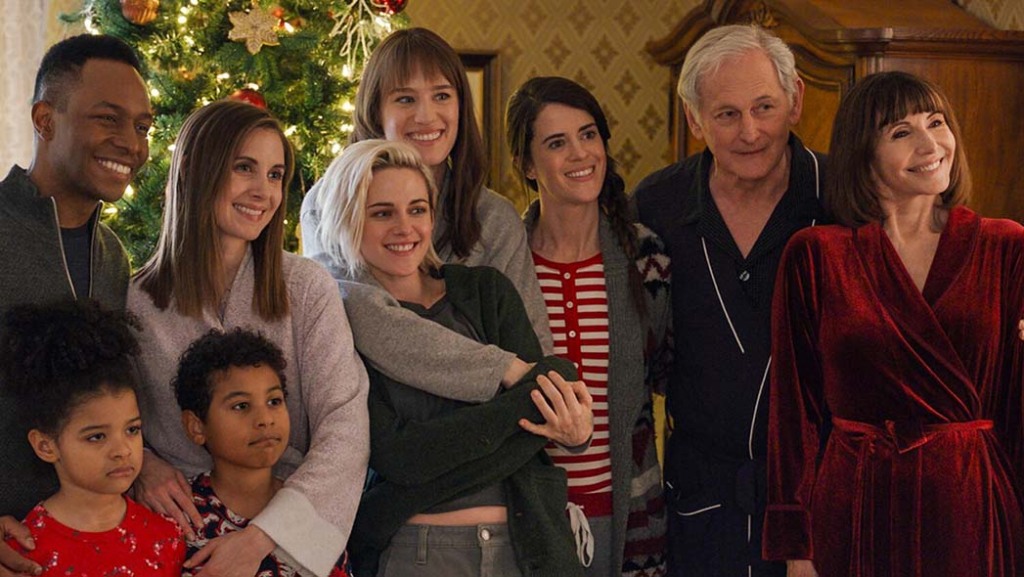 What were some of those details?

She is a very heightened version of me. This whole idea that she is kind of a mediator; she really looks to keep the peace. She feels like it’s her responsibility to make sure everybody is comfortable. Those are all things that I do. And her love of fantasy fiction is spot on. I found writing Jane to be very cathartic (laughs); getting to put this heightened version of me on the page and in this environment. My family is not at all like the Caldwells, so it was fun to put this wild character in that buttoned-up environment. But the personality trait that we gave her that I aspire to is her uninhibited self-love.

I hope you can publish your own fantasy novel someday.

I hope so! Listen, I’ve got a couple of sentences written. The Glorks and the Glanks. We’re working on it.

Filming was done on location in Pittsburgh. What did you do in your downtime?

I’ll tell you exactly what we did in the downtime: Escape rooms. We did maybe every escape room in Pittsburgh.

Clea and I are both major escape room fans. And everybody in this cast loves games. That’s part of what we would do in between setups, is that we’d play these games. Mary Steenburgen is such a game enthusiast too, so we would play games with each other and then on the weekends we would go and do these escape rooms. We hung out with each other a lot in the downtime.

Was there a dark horse escape room star on the production?

Everybody who went to these escape rooms really showed up. They pulled their weight. As someone who has done well over 150 escape rooms— not to brag, but I’ve done a lot of them, I haven’t escaped all of them— but there really is a parallel to doing escape rooms and working on a production together. You have to listen to each other, support each other; you have to feel safe as far as saying, “Here’s my idea about this thing.”

Having written the screenplay, was there any scene you were anxious about filming?

The climax of the movie, when the sisters are all fighting at the white elephant Christmas party. Jane is such a comedic force in the movie and she is a very lighthearted spirit. So this moment when she kind of snaps, I really wanted to make that land and feel earned and grounded and emotional. I wanted to make sure that I was building to that moment. When she has her little speech, everybody is quiet. She’s normally someone who everybody doesn’t listen to. She doesn’t ever have an impact. And in that moment, she has an impact.

I was taken aback by the painting that Jane made for the party and how beautiful it was. With Jane as a character, I expected something a little bit more out there.

Exactly. Was it intentional that Jane be so gifted?

Yes. I think it was really important to [Clea] that Jane not just be a caricature and not just be the joke of the family. That she really does have talent. And that’s also why in the end, she actually does publish her book and it becomes this bestseller, because she is talented and she is artistic, creative and has a lot to offer. That moment with the painting— which could have very easily been odd and that would have been a funny joke— but the fact that it was so meticulously made and so much time was put into it, the destruction of it just added to her crescendo as a character.