The courtroom sketches for Harvey Weinstein were revealed Friday after the disgraced film producer turned himself in, and was later charged with first- and third-degree rape and a criminal sex act in the first degree.

Some of the sketches were done by artist Jane Rosenberg, whose sketches of New England Patriots quarterback Tom Brady caught fire online for their portrayal of the athlete during a hearing for the Deflategate scandal in 2015. Weinstein’s sketches were similarly picking up steam on social media Friday, with some of the discussion surrounding the very different portrayals of the movie mogul by different artists. (See images below.)

Several Twitter users commented that Rosenberg’s “unforgiving” images made Weinstein look “grotesque” and like “a large toad.” Still others praised Rosenberg’s work, saying that they “capture the essence” of Weinstein.

Meanwhile, those who noticed Elizabeth Williams’ version noted the difference in skin tone and weight between the images, with one person noting that, in Williams’ sketch, it looks like the “police accidentally [arrested] Bob Newhart instead of Harvey Weinstein.”

At his arraignment in court, bond was set at $10 million or $1 million cash. Weinstein was asked to give up his passport, can only travel between New York and Connecticut unless otherwise given permission, and has to wear a monitoring device that allows him to be tracked at all times.

Weinstein faces up to 25 years in prison if he’s convicted of the charges.

His surrender comes after more than 80 women have come forward with allegations of sexual harassment or assault against him following explosive exposés in the New Yorker and The New York Times last fall.

Jane Rosenberg, courtroom artist extraordinaire, came through with an unforgiving sketch of Harvey Weinstein today. Swipe through this post for more of her iconic sketches https://t.co/uHoMCv5obo pic.twitter.com/7KL0tujncS 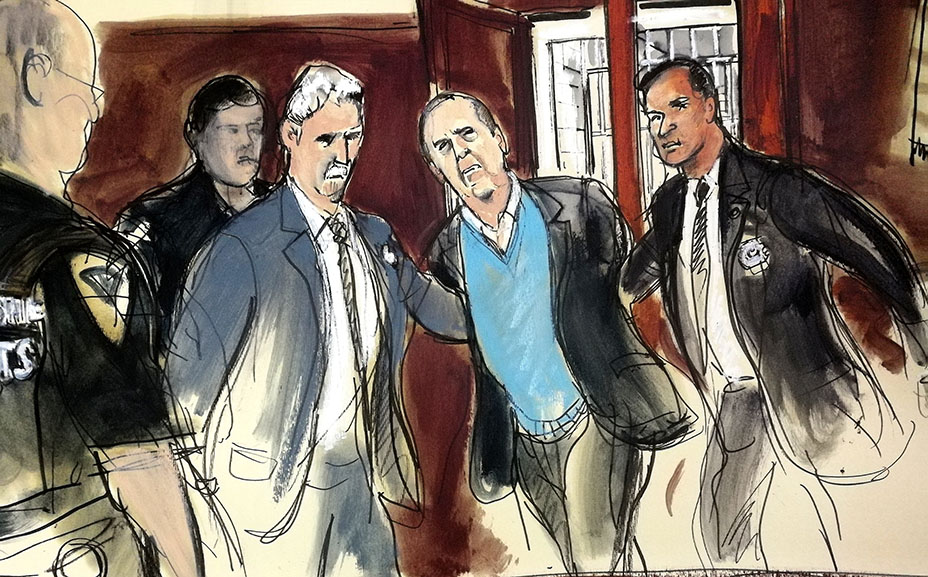