Continue to The Hollywood Reporter SKIP AD
You will be redirected back to your article in seconds
Skip to main content
April 9, 2019 6:15am

Early one morning last May, Detective Nicholas DiGaudio arrived at work in lower Manhattan for one of the most important days of his career. With close-cropped hair and a burly frame, wearing a paisley tie and his New York Police Department badge clipped to the lapel of his navy blazer, DiGaudio escorted Harvey Weinstein into the NYPD’s First Precinct to be fingerprinted, photographed and booked.

After years of seeming untouchable in New York and Hollywood, Weinstein would face sexual assault charges in a case that may be the most significant of the #MeToo era. And it was DiGaudio, 46, together with Sgt. Keri Thompson, who had assembled the case against the disgraced film executive.

In the months since that day, DiGaudio’s role has come under scrutiny, and it seems that when the trial begins June 3, his behavior as an investigator may play a key part in Weinstein’s defense. A detective known among sexual assault victims to be an especially sensitive interrogator, DiGaudio, in his zeal to put Weinstein behind bars, may have actually hurt the case. Prosecutors have disclosed that DiGaudio withheld evidence favorable to Weinstein, leading the judge to dismiss part of the indictment, and that he instructed one of the women in the case not to turn over evidence.

DiGaudio’s defenders say he is the fall guy for problems that stem from the long-standing dysfunctional relationship between the Manhattan District Attorney’s office and the NYPD. “We’re dealing with a case with no physical evidence,” says retired NYPD detective Sgt. Joseph Giacalone. “The defense can’t go after the victims because they’ll look like heels. So they go after the detective. Unfortunately [by withholding evidence], he gave them the opportunity. You wouldn’t want to be this guy. All they have up their sleeve is to attack him.”

DiGaudio has worked for the NYPD for more than two decades and raised two children in a bedroom community north of New York City. He drives a crossover SUV, roots for the Yankees and lays low online except for the rare tweet complaining about JetBlue. He did not return multiple calls for comment for this story, but spoke to me on the record in late 2017, when he was growing agitated with the pace of the DA’s movement on the Weinstein case. In a conversation about one of Weinstein’s accusers whom we had both interviewed, and whose case DiGaudio hoped the DA would take, he spoke in the blunt manner of a seasoned cop. “Do you believe her?” DiGaudio asked. “I do,” I told him. “I do, too,” DiGaudio said. (The DA did not take that woman’s case.) 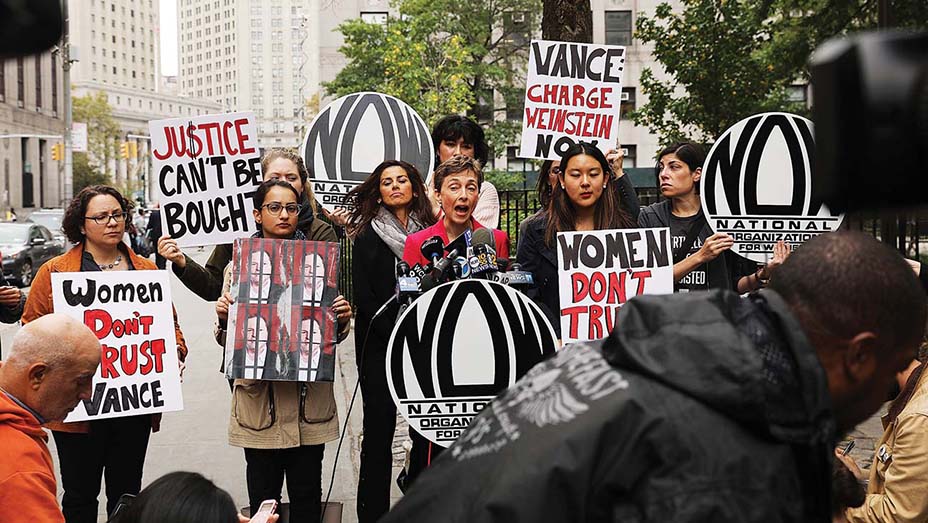 The NYPD’s frustrated history with Weinstein and District Attorney Cyrus Vance Jr. dates back to a 2015 sting operation involving Italian model Ambra Battilana Gutierrez, which one source who worked on the case calls “the beginning of the war.” After Gutierrez told police that Weinstein lunged at her and grabbed her breasts while reviewing her modeling portfolio in his Tribeca office, investigators persuaded her to wear a wire to a meeting with him, at which he apologized for groping her. Weinstein was represented in that case by two attorneys who had made campaign contributions to Vance, and when the DA’s office declined to prosecute, the police who worked the case were livid. “We went above and beyond what we needed to do,” says the source who worked on the case. “The DA’s office will never publicly admit they messed up, but they messed up.”

After a much wider scope of sexual assault allegations against Weinstein became public in New York Times and New Yorker stories two years later, the NYPD was emboldened, and Vance came under scrutiny for his conduct in 2015. In 2017, DiGaudio and his colleagues in the NYPD’s Special Victims Division were determined to make a case against Weinstein that would stick.

They were also equipped with new skills to deploy on the beat. Under Michael Osgood, who took over as commander of the SVD in 2010, the NYPD began to offer training in how to question not just suspects, but victims. Months before taking on the Weinstein case, detectives in DiGaudio’s division were taught a new technique for interviewing sexual assault victims called FETI (Forensic Experiential Trauma Interview). Created by retired U.S. Army crim­inal investigator Russell Strand and informed by neuroscience on how trauma affects the brain, FETI calls on police to abandon their traditional who-what-where-when-why-how interview style in favor of open-ended and sensory-based questions. “Police officers have been trained to focus on ‘Who was it?,’ ‘How tall were they?,’ ‘How many times did they hit you?’ ” Strand says. “A lot of those questions, the victim can’t answer. They can’t explain why they can’t answer. We can’t explain why they can’t answer. And everybody’s frustrated. The idea is, instead of blaming the victim for not remembering, to understand the neuroscience of how trauma memory really works and then apply that to our interview methodology.” FETI can lead to more accurate and coherent interviews, Strand says, and can inspire victims to continue working with law enforcement after their first encounter. Instead of asking, “Why did you wait three weeks to report this?” for instance, police might instead ask, “What brought you in today?”

In the Weinstein case, women had plenty of reasons to be reluctant to speak with police. The mogul had a history of planting negative stories in the press about his accusers. In 2017, he hired the Israeli intelligence firm Black Cube to spy on women who were speaking to journalists.

Despite these fears, DiGaudio was adept at convincing women to tell him their stories. “The key component in this case was for the victim to have a little trust and cooperation, to encourage them and give them a little confidence,” says Michael Palladino, president of the union for city police detectives. “Nick was very good at empathizing with the victims and was successful in building some type of trust.”

More than 80 women have accused Weinstein of sexual misconduct, and he denies any allegation of nonconsensual sex. In the spring of 2018, the Manhattan DA’s office moved forward with sexual assault charges involving three women, all of them interviewed by DiGaudio. In October, in a remarkable win for Weinstein’s defense team, prosecutors dropped a charge connected to one of the women, Lucia Evans, who alleged that Weinstein forced her to perform oral sex on him in 2004, when she was a college student and aspiring actress. Required by law to turn over information that might exonerate the defendant, prosecutor Joan Illuzzi-Orbon sent a letter to Weinstein’s then-attorney Ben Brafman in September disclosing that a woman who was with Evans the night she met Weinstein had given DiGaudio a contradictory account, but the detective had instructed her to keep quiet. “Less is more,” he told the witness, according to Illuzzi-Orbon’s letter (DiGaudio denies making these comments, according to the letter).

In a second letter, Illuzzi-Orbon informed Weinstein’s attorneys of another breach of protocol by DiGaudio. Prosecutors had asked the woman in the case known as Complainant 2 to surrender her cellphones. When she confided in DiGaudio that she was worried about private material on her phone unrelated to the case, the detective told her to delete anything she didn’t want prosecutors to see, saying, “We just won’t tell Joan.” Complainant 2 consulted an attorney, and ended up turning over the phones without deletions. In an October statement, Palladino defended DiGaudio’s actions: “A woman should not have to surrender confidential intimate information that’s immaterial to the case to defend herself against a sexual predator. That’s being victimized twice. Detective DiGaudio was sensitive to that.”

“Anger and frustration should not lead one to be biased and to distort the facts,” says UCLA law professor Peter Johnson, a criminal-defense attorney. “If he omitted information or asked people to omit information that displays his bias, it would impact the integrity of the [whole case]. People rely on his truthful statements in front of the grand jury.”?DiGaudio remains on active duty in the Special Victims Division, but has been taken off the Weinstein case, and an NYPD investigation into his work on that case is ongoing. Last March, the Department of Investigation released a blistering report about understaffing in the SVD, where just 67 detectives handled 5,661 cases in 2017. In November, Osgood, the commander who had introduced victim training to DiGaudio, was reassigned to a patrol bureau in Staten Island; he retired a week later.

The NYPD did not respond to a request for comment and Vance’s office declined to comment on how DiGaudio’s work had affected the case. Among those who still support DiGaudio are some of the women he interviewed. “We had numerous interactions with Nicholas DiGaudio,” says attorney Carrie Goldberg, who represented Evans and actress Paz de la Huerta, another accuser. “He was consistently professional and appropriate. Unfortunately, he was a convenient scapegoat for both the prosecutors and the defense.”

This story also appears in the April 11 issue of The Hollywood Reporter magazine. To receive the magazine, click here to subscribe.