It’s been perhaps the most prolific year yet for female-directed horror films, and it couldn’t come at a better time.

It started with Agnieszka Smoczynska’s The Lure, an oddball horror gem about flesh-eating mermaids singing backup in a Polish dance-punk band that dropped in U.S. theaters this year and can now be enjoyed on Blu-ray thanks to The Criterion Collection. It’s neither popular nor mainstream, according to its box office receipts. It’s significant, though, as one of 2017’s first women-helmed horror movies right out the gate, following Anna Foerster’s Underworld: Blood Wars and Stacy Title’s The Bye Bye Man; The Lure didn’t need to be better than merely average to raise the bar set by both films, but it’s a credit to Smoczynska’s directorial chops that her work stands head and shoulders above forerunners’ regardless.

It’s also the clarion call that heralded the approach of several other horror flicks made by women at a moment where movie culture is interrogating the glaring lack of female voices behind the camera in all categories of filmmaking. It’s telling, though, that horror is so inviting to those voices, especially considering the genre’s tendency to exploit women onscreen.

After The Lure came XX (four horror shorts directed by Roxanne Benjamin, Karyn Kusama, St. Vincent and Jovanka Vuckovic), Prevenge (Alice Lowe), Raw (Julia Ducournau) and The Bad Batch (Ana Lily Amirpour), each unique in its own way, repeating occasional themes — cannibalism sure is a recurring thought exercise for these filmmakers, and good reason to decline invitations to dine with them — but never mirroring the others in terms of style or intentions; it’s a modest crop, but a great crop all the same. Women aren’t strangers to horror, of course. You can go as far back as 2014 for Jennifer Kent’s The Babadook and The Bad Batch director Amirpour’s debut, A Girl Walks Home Alone at Night; you can go further, into the ‘90s and ‘80s, and land on movies like American Psycho (Mary Harron), Ravenous (Antonia Bird), The Slumber Party Massacre (Amy Holden Jones, Sally Mattison, Deborah Brock) trilogy, Near Dark (Kathryn Bigelow) and Office Killer (Cindy Sherman); you can even time warp all the way to the ‘50s, if you’re willing to argue that Ida Lupino’s excellent The Hitch-Hiker counts as horror. (Hint: It totally does.)

But we’re living through a period where women’s rights are still being fought for, and in that context horror feels like a perfect vehicle for telling their stories; those stories gain residual boosts in visibility, too, as we keep a lookout for movies led by women. If there’s one lesson to learn from our recent spate of industry sexual assault scandals, comprising the falls of film blogger Devin Faraci, Ain’t It Cool News founder Harry Knowles, and studio mogul Harvey Weinstein, it’s that the entertainment industry and its participants have to listen when women publicly allege mistreatment by their male peers. Listening logically extends to the art they produce, too, especially when that art so clearly lays out their personal fears alongside greater cultural anxieties.

It’s impossible to watch Alice Lowe’s Prevenge or Julia Ducournau’s Raw without taking notice of how they open up about interior concerns about feminine sexual identity, especially the latter, whose protagonist, a vegetarian college student who develops a sudden and inexplicable hunger for meat following an initiation ritual foisted on the school’s new arrivals. She spends the film in a tailspin of a sort, struggling to figure herself out as she’s subject to mixed messages over her budding sexuality. Hopping from France to England, there’s Lowe, telling a tale as old as time in Prevenge, in which an expecting mother (played by Lowe, who also wrote and directed the film while pregnant with her own child) goes on a killing spree, bumping off the people responsible for the death of her partner in a climbing accident. You can’t watch the film without considering its messages about reproductive rights and society’s way of looking down on single moms (which makes a gory revenge slasher where a fetus compels its parent to kill sound drier than it actually is). 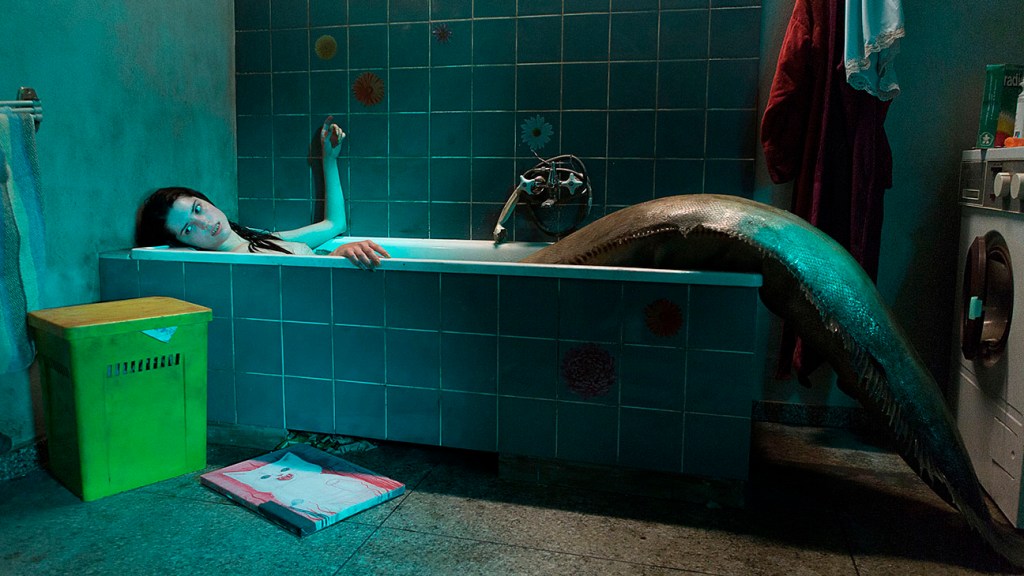 The Lure’s themes are somewhat simpler than those of its cousins, but that simplicity lends it a universal immediacy. This mermaid film is about gender roles and men’s habit of imposing their will on women. One of Smoczynska’s two heroines, Silver (Marta Mazurek), falls in love with Mietek (Jakub Giersza?); her sister, Golden (Michalina Olszanska), is warned that should Mietek marry another woman, Silver will turn to sea foam. Such is Silver’s love for Mietek that she has her tail sawed off and surgically replaced with human legs, the greater price being the loss of her singing voice, but the sacrifice is in vain. You can feel Smoczynska bristling on the other side of her lens: The Lure may be campy and bizarre, the disparity between sexes that plays out in its plot is real.

Darren Aronofsky made similar overtures with mother!, a movie about a man who literally uses up everything his wife has to give him until only her carbonized husk remains. Watching a man make this point requires some generosity on behalf of the viewer, though. Watching Smoczynska make the same point, sans Aronofsky’s level of crazy, fosters an entirely different, more genuine experience; the statement becomes personal rather than tangential, and this is precisely why The Lure matters, and why women-led horror matters. These movies speak directly to obstacles that hound women in 2017 in ways that productions architected by dudes simply can’t.

When a Horror Movie Shows Too Much