The daunting question that faces every breakout actor: How should one put his or her best sartorial foot forward in the face of new opportunities? In the case of Algee Smith — who has been gaining acclaim for his performance as a kid who gets gunned down by police in The Hate U Give — the 24-year-old rising star consults with THR contributing editor Andrew Weitz, the former WME rep turned fashion guru to some of the town’s top industry leaders.

“I thought back to when I was an agent, and pretended I was representing him,” says Weitz of his approach to putting together looks that are meant to take Smith to meetings with studio execs and directors. “But I’m not trying to make him look like a stuffy executive,” just bringing “a refined twist so that Algee presents himself in the right light.” 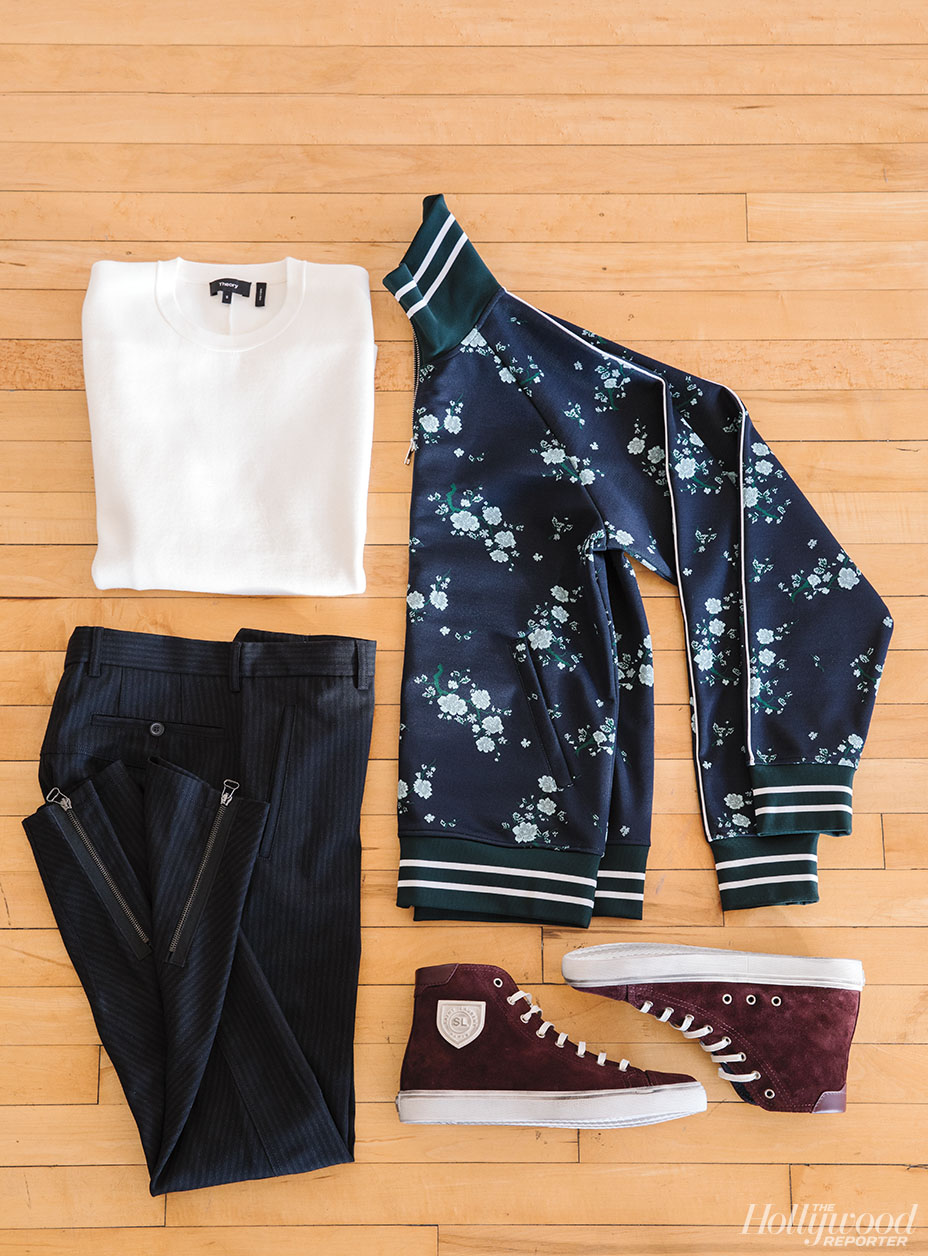 The Atlanta-raised Smith, who also is juggling a burgeoning music career, has been tapped for HBO’s just-announced series Euphoria, to be produced by Drake and his manager Future the Prince. The high school drama, an American adaptation of an Israeli show, co-stars Zendaya, Storm Reid and Maude Apatow.

“I first knew of his work when I saw him in The New Edition Story,” says George Tillman Jr., director of the well-received The Hate U Give. Smith followed up the 2017 BET miniseries with Kathryn Bigelow’s Detroit, in which he starred alongside John Boyega and Anthony Mackie. “I think he’s going to have a big future,” adds Tillman. “There’s nothing about him that is contrived, he’s very naturalistic.”

From a phone consultation and online research, Weitz had already pegged Smith as a pretty stylish dude, with a good awareness of how things should fit and a fashion-forward attitude. “Before, it was like, I’ll wear whatever, but when you have a goal in your mind, it changes things,” says Smith, who adds that he draws from both urban influences and pop culture when putting himself together, giving a shoutout to Jerry Lorenzo’s Fear of God luxe streetwear: “I love Jerry’s style.” Smith also likes Pyer Moss (“They’re super creative over there”) and Prada, for whom he did a fall 2018 ad campaign: “I got to meet Ms. [Miuccia] Prada herself and take my mom to Italy to the Prada fashion show” in June, Smith’s first time in the front row. 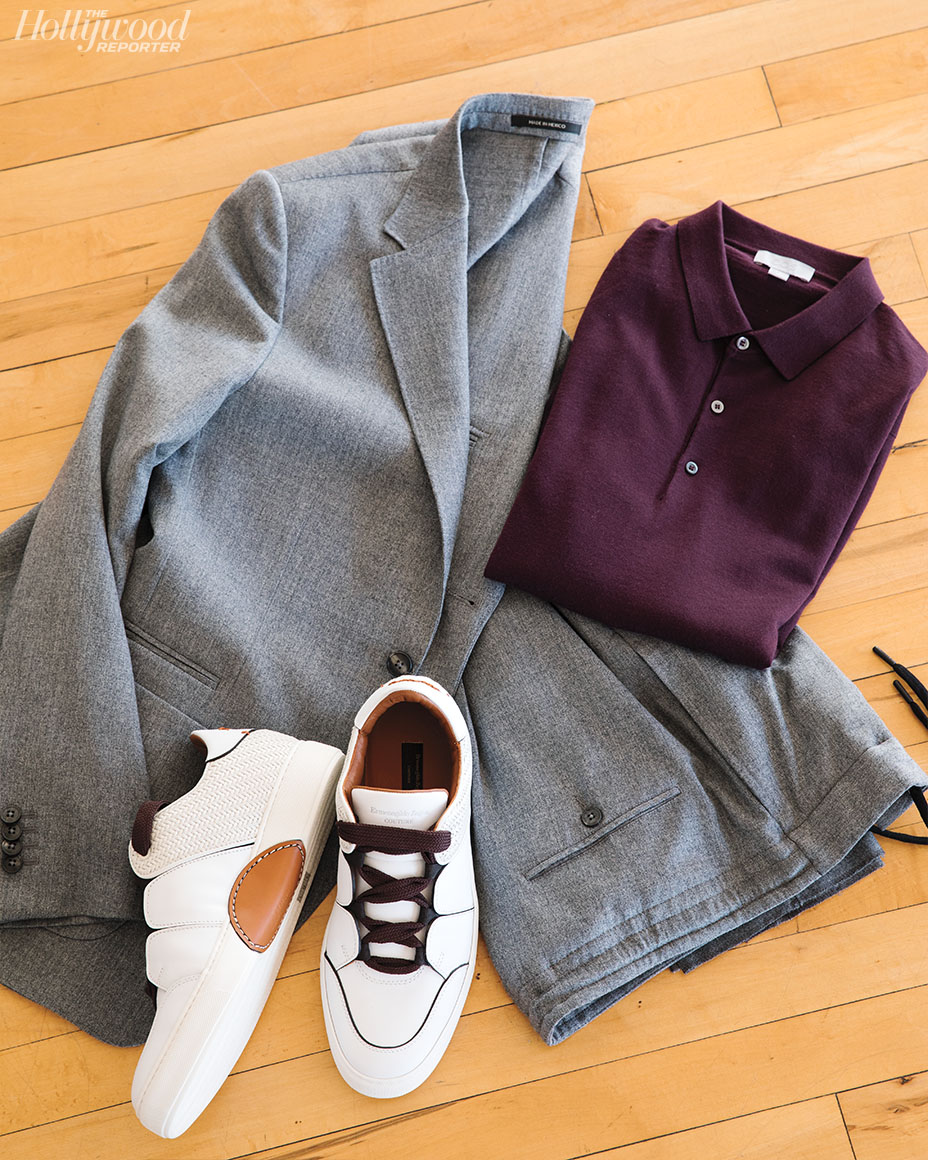 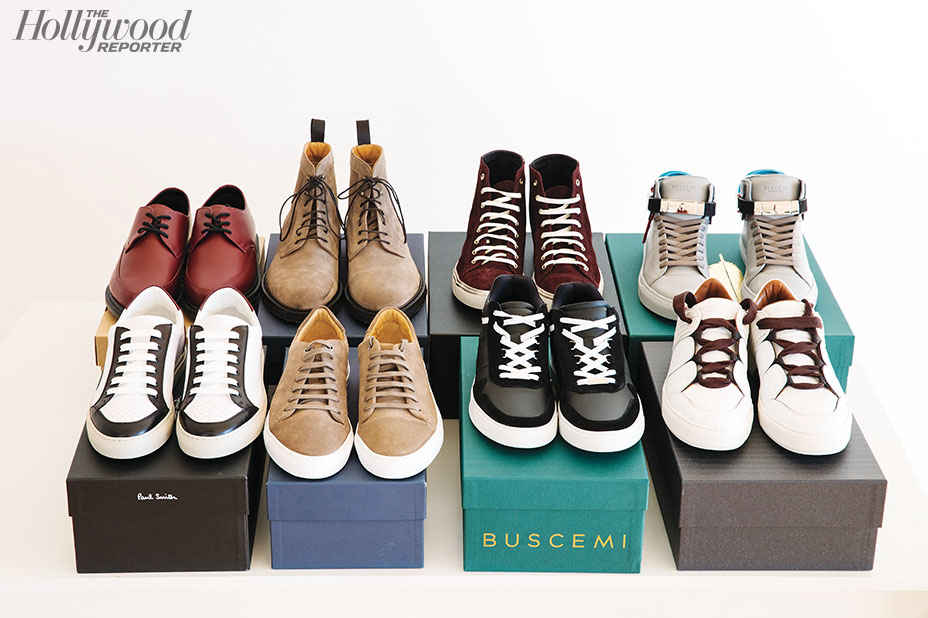 When they meet up for the shoot, Smith strides in wearing a well-fitting black Calvin Klein T-shirt, skinny ripped jeans and sneakers. “He is well-styled and carries it with a lot of swag,” says Weitz, who considers Smith a step ahead of most industry men, who have their public appearances orchestrated by stylists but can be stymied by everyday business looks. (For the red carpet, Smith works with Enrique Melendez, who also styles This Is Us‘ Lonnie Chavis.) Then there are budget constraints for younger actors: Weitz advises bargain hunting for most items, but “splurging on shoes or sneakers, and a great sweater or blazer.”

For the first look, to be worn at “a meeting with a producer, director or casting director,” Weitz builds around a pair of slim gray pinstripe trousers from Suitsupply that Smith is also eyeing on the rack. They pair those pants with a Cos navy knit polo shirt buttoned all the way up, and add military-style boots in plushy taupe suede, also from Suitsupply. “I wouldn’t have thought to put the boots with that, but it gave it a different kind of feel,” says Smith with approval. 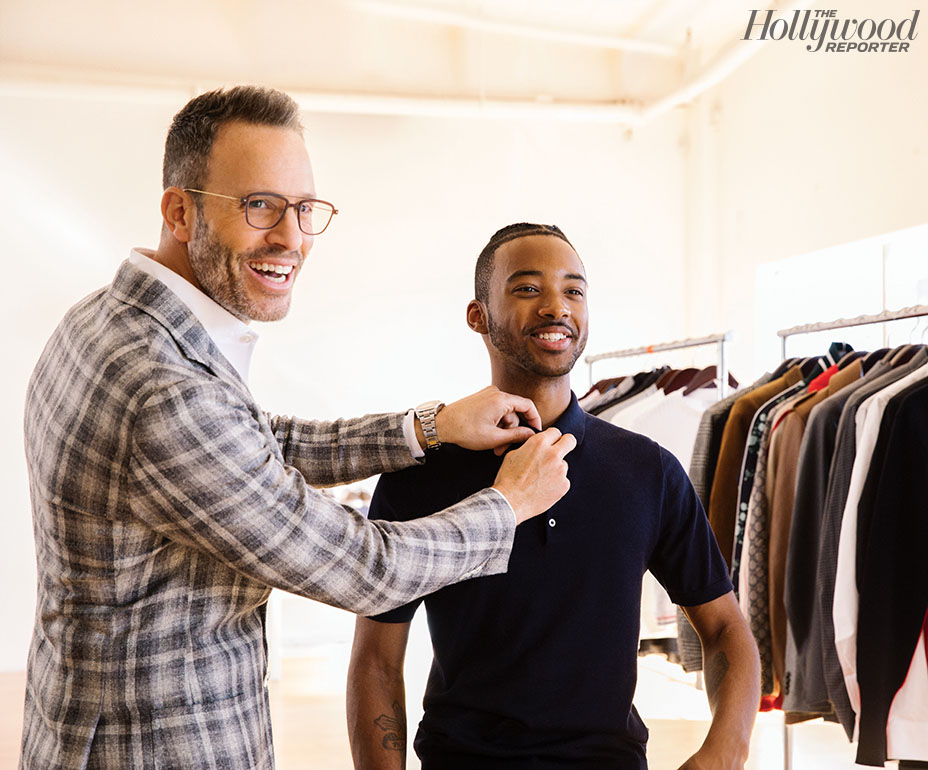 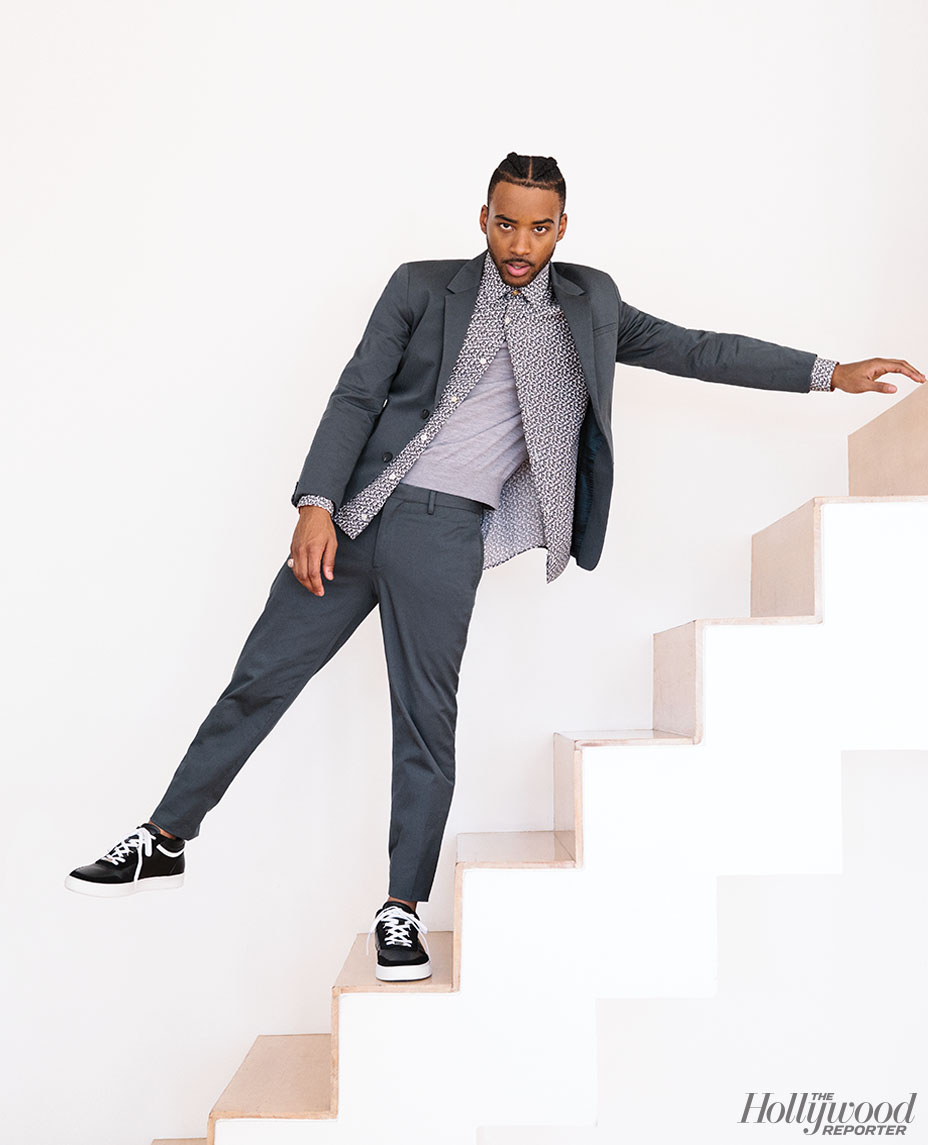 To take the look to the next level, Weitz reaches for a multicolor cardigan from menswear designer Thom Browne. At first Smith jokes, “Uh-oh, Mr. Algee’s neighborhood!” but then notes that the outfit, while different for him, is very comfortable. “It’s easy, but it’s a movie-star look — sunglasses optional,” notes Weitz. “You could transition from a meeting to going out to dinner.”

For the second look, “a meeting with the suits,” Weitz “up-levels” the actor’s garb by putting him in a moss-green Cos suit with patch pockets and cropped trousers. Black Buscemi sneakers and a gray Z Zegna turtleneck (a nod to the turtleneck revival that’s in full swing for fall) complete the outfit. Weitz then adds a print shirt from English designer Paul Smith, which he buttons only at the top, letting the shirttail fly.

Smith fully embraces this choice: “There is a splash of ‘I don’t care, I don’t give a fuck’ with the open shirt and turtleneck. It is a confidence thing — ‘I wear what I want.’ I feel like it is me.” A fitting response from an actor who says that, in his off-hours, when he’s not meditating, or playing Call of Duty or Super Mario Kart at his home in the San Fernando Valley, he ducks out to sing Usher at North Hollywood’s The Good Nite karaoke spot. That confidence can come in handy when he’s on duty, too, because any showbiz newcomer should “communicate passion — that this is their craft, their livelihood and serious business,” says Weitz, to make the person on the other side of the table feel, ” ‘Wow, this is the person I want for my role.”” 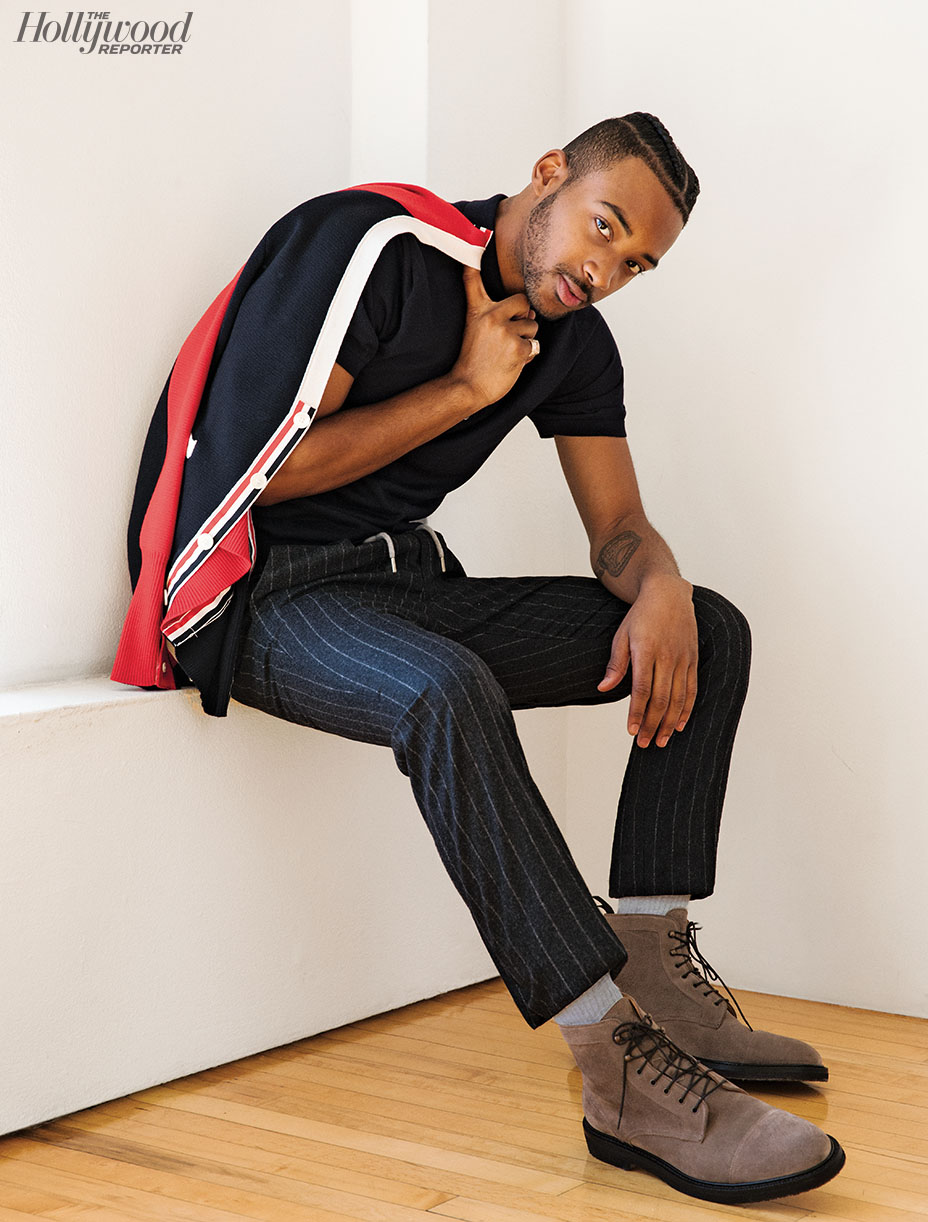 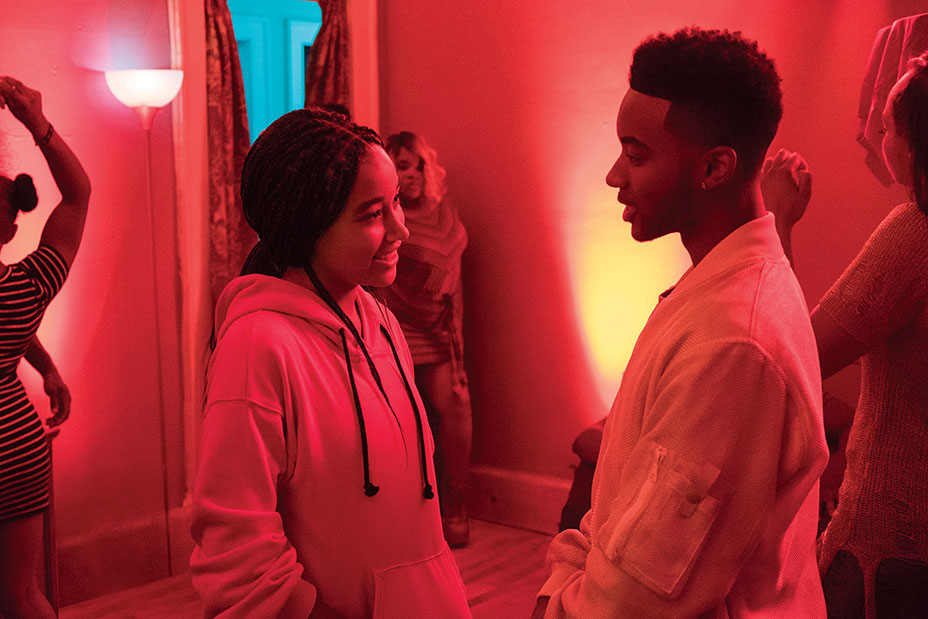 All Saints If you search Google for ‘All Saints” the first thing that comes up is leather jackets. Indeed, they have a range of sharp MC and bomber jackets in the $500-$600 range. But much more, including great print shirts, graphic hoodies and polished sweaters (330 North Beverly Drive, Beverly Hills; 310-499-0970).

COS This up-level brand from Swedish retail giant H&M has legions of fans for its understated modernist clothing. Men’s outerwear is a strong point, and they do wearable interpretations of current trends, like this season’s wide-legged trousers. (COS Olympic Theatre 313 West 8th Street; 213-271-2716).

Greats Born in Brooklyn, as they say, their essential ‘Royale’ leather sneaker is made in Italy and a fraction of the price of their designer kin. Or check out the seventies-inspired ‘Pronto’ as well as special collabs and Cali exclusives (1505 Abbot Kinney Blvd, Venice; 310-392-0033).

Sandro Paris Though not inexpensive it’s great value for a moderate price tag for items that play on vintage styles and beautifully tailored and fitted suits and outerwear. Not to mention more sportif styles like a sweatshirt with regimental braid on the sleeve (310 N Beverly Drive, Beverly Hills; 310-281-0083).

Suitsupply The name on the door says ‘Suits’ but as our layout shows, that’s only part of the story. They also have everything a rising star needs, from turtlenecks to tuxedos. And slick accessories, like no-logo leather satchels and backpacks at non-stratospheric prices (1136 Abbot Kinney Blvd, Venice; 424-206-6180).