Fifteen years ago, zombies started running. They haven’t stopped since. In June 2003, Danny Boyle unleashed his outbreak movie, 28 Days Later, on an unsuspecting American public. While the British film had already enjoyed success abroad and on the film festival circuit, it seemed fitting that 28 Days Later should find unexpected success and make its pop-cultural mark through its limited release in America, the birthplace of the modern zombie. While the Alex Garland-penned 28 Days Later proved to be markedly different from the zombie movies that had come before, it was still situated in the legacy of George A. Romero. With Night of the Living Dead (1968), Romero not only helped usher in a wave of independent horror but created the birth of the modern zombie. The walking dead, which Romero referred to as ghouls — distinct from the creatures that Haitian folklore referred to as zombies, came to define his career and led others to follow in their wake.

Rather than borrowing from the voodoo elements seen in White Zombie (1932) or I Walked With a Zombie (1943), most of the zombie movies that followed in the ’70s and ’80s borrowed from the rules Romero established in his trilogy Night of the Living Dead, Dawn of the Dead (1978) and Day of the Dead (1985). Dan O’Bannon’s The Return of the Living Dead further cemented the appeal of zombies by making them creatures who desired to eat brains. Lucio Fulci’s Zombi 2 (1979), Tom Eberhardt’s Night of the Comet (1984) and Stuart Gordon’s Re-Animator (1985) are only a few of the films that helped expand the reach and popularity of zombies, not only in America, but worldwide, particularly in Italy. Wes Craven’s The Serpent and the Rainbow (1988) was the only significant film to return zombies to their Haitian roots, but as far as the general public was concerned, these undead creatures with stiff walks, a hunger for brains, and a bite that allowed them to procreate were and would forever be zombies.

Interestingly enough, and again going back to the roots of Romero’s innovation, Danny Boyle does not consider 28 Days Later a zombie movie. Though he has made note of his influence from Romero’s Dead trilogy, he cites the post-apocalyptic novel The Day of the Triffids as Garland’s inspiration for Jim’s (Cillian Murphy) journey through a society that has been deserted. Boyle’s infected are overcome with rage, they run, transmit their virus through the exchange of fluid, and don’t require a headshot to be taken down. Like Night of the Living Dead, 28 Days Later uses the idea of these living dead to explore the collapse of society. While so many of the films outside of Romero’s were most interested in the creatures themselves and the copious amount of gore they produced, Boyle took a step back to reflect on what an outbreak would mean for society and its rules. 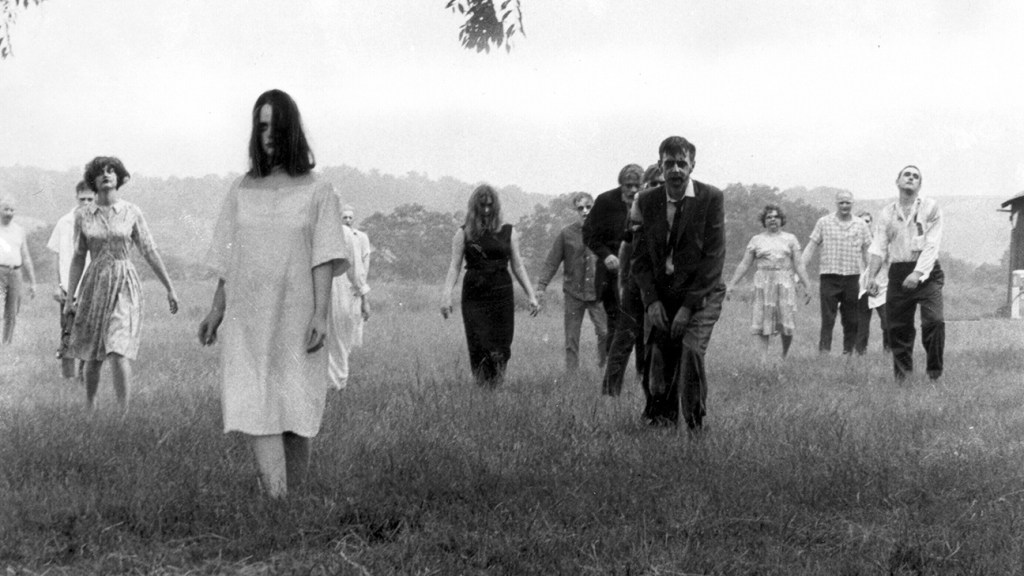 Night of the Living Dead exposed the racism still residing in America after the Civil Rights Movement through an ending, intentional or not, that showed militarized America’s inability to see black people as anything other than monsters — and in hindsight, perhaps spoke to the omission of black people from the zombie narrative they created. 28 Days Later isn’t concerned with race, but rather the evil, and uncontrolled impulses of men. The film’s exploration of repopulation through sexual slavery is harrowing, and like Romero’s films, it makes the point that the living are just as frightening as the dead when left to their own devices.

Regardless of 28 Days Later not fitting into Boyle’s definition of a zombie movie, its impact has left it squarely situated within that subgenre. While we can argue semantics, 28 Days Later is for all intents and purposes a zombie movie, particularly when looking at its influence and the boom of zombie movies it unleashed. While zombie movies didn’t entirely go away in the ’90s, with Peter Jackson’s Dead Alive (1992) serving as a notable example, they certainly didn’t have the appeal they once did. But 28 Days Later, in its character-driven artistry and ability to make zombies terrifying in the first time in years, seemed to attach to emotional imbalance of a post-9/11 America despite the film’s U.K. setting.

For many Americans, it felt like society was collapsing, and that invasion wasn’t just something that happened to other countries, but something that happened to us. With increased fear of biological weapons, fervent mass militarization and the burrowing question of who exactly are the people we call our neighbors, society was ripe for the re-emergence of zombie movies. The Zack Snyder-directed and James Gunn-scripted Dawn of the Dead (2004) remake helped push along the zombie craze domestically, while the Edgar Wright horror-comedy Shaun of the Dead (2004) explored the malleability of the subgenre overseas.

From there, things really took off. 28 Weeks Later (2007), Planet Terror (2007) Dead Snow (2009) and Zombieland (2009) showcased the diversity of tones as our real-world concerns shifted, and were able to be satirized, before inevitably being replaced with new fears. Even Romero entered the fray once again with a new series of zombie movies that, while less well-received as his previous films, made an effort to push his concepts forward. Robert Kirkman’s comic series The Walking Dead (2003) was adapted for television in 2010 and has grown into a worldwide phenomenon. Video games like the ever-reliable Resident Evil franchise (a film series also helped along with the zombie boom), The Last of Us (2013) and Call of Duty modes put the zombie apocalypse directly in the hands of survival horror enthusiasts. Books like Max Brooks’ World War Z (2006), Seth Grahame-Smith’s Pride and Prejudice and Zombies (2009) and Isaac Marion’s Warm Bodies (2010) took over best-seller lists and led to film options before the ink on the pages had even dried. Zombies have had an unprecedented hold on the zeitgeist and infiltrated every level of pop culture, from prestigious to pointless. But of course, all good things most come to an end, and zombies must find their way back to the ground.

The popularity of specific horror subgenres — slashers, paranormal, vampires, giant monsters, etc. — like so many waves of pop culture, come and go in cycles. Teen-specific pop-culture crazes are a strong measurement of what to expect when it comes to the subgenres of science-fiction, fantasy and horror. While those three genres will always be popular and likely account for our biggest sensations, the ways they are presented to us have shown an ability to change drastically. Just within the past 10 to 15 years, we saw the rise of paranormal romance, popularized by Stephenie Meyer’s Twilight (2005) and the subsequent films that followed. These led to a host of related book series and film adaptations that failed to catch hold: Beautiful Creatures (2013), The Mortal Instruments (2013) and Vampire Academy (2014). Television shows of this ilk fared better — True Blood (2008) and The Vampire Diaries (2009) — but eventually interest waned and these shows reached their conclusion.

A similar story could be told with teen post-apocalyptic novels and their adaptations. While The Hunger Games (2012) took off and launched Jennifer Lawrence into stardom, adaptations of the Divergent (2014) series, The Giver (2014) and The Fifth Wave (2016) fell hard. Zombie movies have lasted longer than any of us could have predicted, arguably helped by their appeal to not only teenagers, but to adults as well. But with The Walking Dead heading into its ninth season as star Andrew Lincoln is poised to exit, and zombie movies seemingly stagnant, with the promised trifecta of a World War Z sequel, Zombieland 2 and 28 Months Later showing little movement, the future promises a new horror craze, and soon.

Elevated horror is the latest buzz word to hit the genre. With films like It Follows (2015), The Witch (2016), Get Out (2016), A Quiet Place (2017) and Hereditary (2017) have been sighted as showcasing a change within horror. This suggested change is a social one — built on relationships between families and communities. Jordan Peele coined the term “social thriller” for his Oscar-winning Get Out, which has become a sister term to elevated horror. But horror has always been social, and it’s always held room for elevation. Even schlock and slashers can be viewed with an elevated perspective. Keeping in mind that horror is cyclical — that zombie movies had their day in the ’70s and ’80s before having a second coming in the 21st century — elevated horror is nothing new. From the first horror movie to the latest, we can mark points of elevation, of smart horror movies with something to say, and find at least 1,000 from across the globe. And even if we take that term, elevated horror, in modern context, from the 2000s onward, it didn’t begin with widely released features. It began in indies like The Descent (2005), Lake Mungo (2008), Martyrs (2008), Resolution (2012) and Honeymoon (2014).

There is definitely something happening in horror now that feels different, but the genre has always been an intelligent one, and the 21st century horror revolution we’re currently enjoying began in smallest of places, on VOD screens and limited releases. Instead of referring to films like Get Out, A Quiet Place and Hereditary as elevated horror, perhaps we should view them as internal horror. What makes these films different isn’t that they’re smart, or offer social commentary, or are filled with dramatic resonance, but that so much of the horror comes from what’s inside human beings. This kind of horror isn’t as easy to categorize as zombies. It’s less specific, and based more in the threat feelings than in big bads. These films give us new reasons to fear the dark, not just because of what might be lurking in the shadows, but because of what’s lurking in our minds when we’re alone and can’t sleep.

Our society is a nursery for mental illness, for self-doubt, for questions of genetics, sex, race and where we fit in. The fears that stem from these place aren’t always logical, and if we look at our films, we can see that they are also charting illogical lines to map our uncertainties. Get Out doesn’t worry about the science of brain transplants, A Quiet Place doesn’t care about the impossibility for certain silences, and Hereditary showcases a paranormal presence that doesn’t play by rules that can be solved by a medium. These are films that play on our current internal fears, and it’s the fact that they are so steeped in the current that makes them feel fresh, not the fears themselves. For 15 years, we’ve been chased after by a dead, human shaped thing that bites and turns us against our fellow man. Now that we’ve shaken that dead thing loose, we’re left to confront the human-shaped shadow inside, the one that turns us against ourselves. The next great battleground for horror won’t be fought in boarded houses, shopping malls or military complexes. It will be fought inside our hearts, minds and souls, and it’s a battle that’s just starting.

George A. Romero on Brad Pitt Killing the Zombie Genre, Why He Avoids Studio Films