Hellboy is back on the big screen this week. Already the subject of two movies starring Ron Perlman and directed by Guillermo del Toro, the new movie — once more simply titled Hellboy — has David Harbour taking up the demonic mantle and Neil Marshall behind the camera.

The story has Hellboy being sent on a mission in Europe to take on the latest supernatural menace threatening the safety of the planet and existence itself. What he encounters is Nimue The Blood Queen (Milla Jovovich), who has plans to bring about the end of the world. She tempts Hellboy with power at her side if he helps her, embracing his fate as the cause of the end times and the bringing of hell to Earth.

Tracking forecasts anticipate an opening weekend of $17 million to $21 million, an estimate that reflects not only the film’s scheduling realities — Captain Marvel and Shazam! have eaten up big chunks of the box office recently and could continue to perform strongly — and the massive looming debut of Avengers: Endgame. There’s also fan skepticism given the departure from the well-regarded films from del Toro that has to be overcome. To counter all that, Lionsgate has mounted a campaign that is heavy on hellfire and humor.

Big Red is shown with fiery sword resting on his shoulder on the first poster, released around the time of New York Comic-Con in October.

The next poster from mid-December has the movie’s title placed between Hellboy’s extended, fiery horns while copy helpfully reminds us that “Demons have demons too.” Motion posters released in December and January offered a more extensive look at Hellboy as well as an image of him drawing down hellfire from the sky, a face outlined in the lightning cutting through the sky.

Hellboy is ready to “Give evil hell” on the next one-sheet, which shows him in close-up with his trusty pistol ready for action. He’s once more got the sword and is sporting his demonic crown on another poster, his strong right hand resting on the hilt of that sword. Both of those came out in February, about the same time as the second trailer.

A series of very artistic, comic-looking posters came out in March. One showed a series of small demons and fairies dancing around Hellboy’s head, while the hero looked slightly mischievous on another. He’s weary on a third, with his torso and sword dissolving at the bottom like rain that’s washing away a painting on a concrete wall, and another simply showed him grim and maybe a bit sad.

More of the cast is shown on a one-sheet that’s once again a drawing as opposed to photographic, with Hellboy at the center of the characters and hints of various scenes from the movie. Hellboy, labeled by the copy as “One hell of hero,” looms in the background of the other characters on another poster.

In March the Imax-specific poster was released offering a full look at Hellboy and most of the other main characters, all arranged on a fiery image featuring ancient symbols carved into rock and creatures floating around, creating a very supernatural feel and vibe.

The first trailer (9.7 million views on YouTube), released in late December, explains that Hellboy might be the one to end the war between humans and demons, introducing the agency tasked with waging that war and Hellboy’s role there. It’s a spot that’s filled with lots of demon fighting and lots of the character’s trademark sardonic humor, which is just what the audience is likely wanting. A green-band version of the trailer was largely the same, just without some curse words.

The next trailer (8.9 million views on YouTube) from early March has Hellboy learning of his past and his destiny, even while being called on to end the threat posed by a sorceress that’s been summoned back to life. She wants to recruit Hellboy to her cause, playing on his position as someone feared by those he protects. There’s lots more magical action and it all looks fun and violent, just as we like the character.

Harbour and the rest of the cast and crew brought themselves as well as footage from the movie to New York Comic-Con in October, where everyone enthusiastically shared what fans could expect and how excited they were to be part of the movie and the character’s history. An exclusive banner signed by the cast was available to fans at that convention showing a wide panoramic view of the kind of hellish action audiences could expect from the movie.

Dark Horse Comics, the publisher of the Hellboy comics, announced late last year it would celebrate the first ever “Hellboy Day,” scheduled for just a couple weeks before the movie was to come out. That included a new edition of Mignola’s first Hellboy comic and promotional items being sent to retailers that could be given away to fans and used for events.

The makers of the free online fighting game Brawlhalla announced characters from the movie would be playable in the game. Hellboy was also added to the puzzle game Legendary: Game of Heroes.

Travelers booking stays at Ace Hotels in select cities could get a discount thanks to a partnership with Lionsgate and receive a movie-themed gift package and two tickets for the movie.

The first TV spot came out in early March, presenting a cut-down version of the trailer that showed the action and humor of the movie. At about the same time the second trailer was used in a Promoted Tweet to increase reach and awareness.

The first clip was released in mid-March showing Hellboy being briefed about the partners he’ll have to work with on an upcoming mission. That was followed by a featurette with Harbour, Mignola and others talking about the movie, the character and the comics story they were adapting. Another clip had Hellboy being made an offer to rule the post-apocalyptic world he can usher into existence.

Facebook Camera users could add a Hellboy AR effect to their photos. 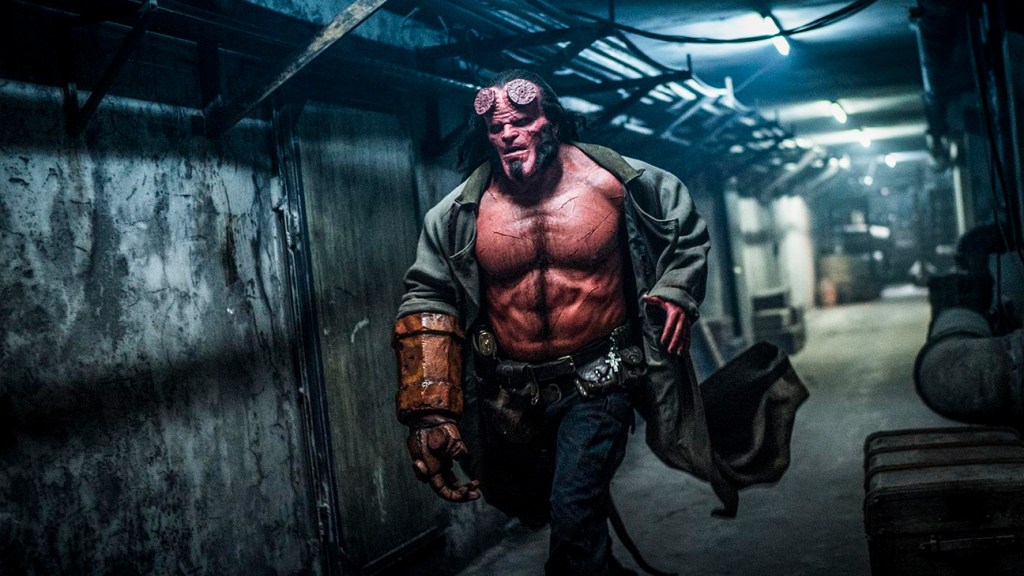 The dual nature of the title character is on display throughout the campaign. More specifically, the conflict between how Hellboy was raised by his adopted father (Ian McShane) to be a bulwark against the forces of evil and how he is, by birth, the very embodiment of those same evil forces. You see that in the posters with copy explaining he’s going to “Give evil hell” while at the same time wearing the fiery crown that denotes his place as the prince of the end times. It’s also in the trailers where he is working to fight on the side of a humanity that fears him while being tempted by Nimue to give in and take his rightful place at her side.

Harbour and other members of the cast and crew have been selling the movie as a good time, as has Hellboy creator Mike Mignola, who has given the film his blessing and has frequently promoted it on his own social media profiles and in the press.

All of that is meant to appeal to fans of the character who may be wooed by the fact that, unlike del Toro’s earlier movies, this one sports an R rating, promising even more action and violence. Still, the fact that this reboot resulted at least in part from an unwillingness on the part of studios to finance a direct sequel del Toro had plotted and which would have featured the original cast has some in the audience still stinging. The campaign has tried its damnedest to overcome that by showing how Harbour embodies the character.