One week after its southern Ohio county voted to reelect Donald Trump by a 24-point margin, the Cinema 10 in the steel town of Middletown was playing host to a Hollywood film premiere of sorts, a prerelease screening of the new Netflix movie Hillbilly Elegy.

The Ron Howard film, which stars Amy Adams and Glenn Close as a pair of flawed but tenacious Appalachian matriarchs, is based on J.D. Vance’s 2016 memoir about rising out of poverty in Middletown with the help of his Kentucky-born grandmother (Close) and eventually attending Yale Law School. The week of Trump’s inauguration in 2017, the book was No. 1 on the New York Times nonfiction best-seller list, propelled there in part because Vance was in the media helping to explain Trump’s popularity among poor white voters to the rest of the electorate. But four years later in Middletown, “That subject [Trump] hasn’t come up in regard to the movie at all,” says Republic Theatre Group owner Mitchell Bryson, who booked the screening. “There is a lot of political fatigue.”

The movie was conceived in a moment when Hollywood was trying to better understand and program for the country that had unexpectedly elected Trump. ABC brought back Roseanne, Fox revived Tim Allen’s defunct sitcom Last Man Standing, and Sarah Silverman launched a talk show on Hulu in which she interviewed Trump voters. But when Hillbilly Elegy finally arrives on Netflix on Nov.  24, after a limited theatrical release, the film is dropping into a much less conciliatory political environment, albeit one where 9  million more Americans voted for Trump than did in 2016.

“I expect the movie will do very well in Middle America, the Rust Belt and the South,” says Rod Dreher, the American Conservative columnist whose 2016 interview with Vance helped drive early interest in the book. “I am much less sure about coastal audiences. I would have imagined that a Hillbilly Elegy movie would have been universally popular because … it tells a story about perseverance in the face of impossible odds, and of the power of a grandmother’s love. But I sense that enough time has passed since the book’s publication that a lot of Blue State folks are going to intuitively associate the story with Trump, and come to it with a grudge, if they come to it at all.”

Vance, who went on to work for libertarian venture capitalist Peter Thiel and then to found his own Midwest-focused venture fund, Narya Capital, has a natural skepticism toward Hollywood, according to multiple sources who know him. As opposed to most Hollywood book rights deals, which are brokered prepublication, the Hillbilly Elegy deal closed nearly a year after the book’s June 2016 publication date, once it had become a genuine phenomenon. (Vance declined to be interviewed for this story.)

Vance, who details his mother’s opioid addiction, family history of domestic violence and the impact of his strong-willed grandmother in getting him to college, never mentions Trump in his memoir, which he wrote before the president launched his campaign in 2015. But he does dispense broad cultural observations that reflect the views of many Trump voters, including a disdain for reliance on government anti-poverty programs.

“I could never understand why our lives felt like a struggle while those living off of government largesse enjoyed trinkets that I only dreamed about,” he writes, of watching welfare recipients talk on cellphones in line at the grocery store, while he, the cashier, couldn’t afford a phone. Vance became a de facto spokesperson for the disempowered Rust Belt voter while promoting the book, speaking at conferences and appearing on TV, pointing out on CBS News that Trump’s focus on jobs and on the “sense of loss” felt in white working-class communities drove his election.

Vance also has a connection to the conservative Supreme Court — his wife, Usha, whom he met at Yale, is a lawyer who clerked for Chief Justice John Roberts, and previously for Justice Brett Kavanaugh in the U.S. Court of Appeals for the District of  Columbia.

Though it was politics that helped sell Vance’s book to readers, Howard’s pitch to focus on the family drama at the memoir’s core ultimately won Vance over to a Hollywood adaptation. The director’s Imagine Entertainment closed a seven-figure deal for the film rights in April 2017, with Vance getting an executive producer credit. In removing the broader political content from the movie, Howard was making Hillbilly Elegy easier to market, at least within Hollywood.

“If you’re going to make a family drama and you’re going to cast movie stars, you’re going to make it about the characters,” says WME partner Anna DeRoy, who represents Vance. “The political stuff is in there, but it’s subtle.” In January 2019, Netflix acquired the distribution rights for $45  million, with the promise of a theatrical release. That June, Howard began shooting in Atlanta from a screenplay by Shape of Water screenwriter Vanessa Taylor, with  actor Gabriel Basso taking on the role of adult Vance.

Howard and Vance are well matched in temperament — both men are said to be incredibly polite, and like Vance’s family, Howard’s parents hail from small, rural towns, in Oklahoma and Kansas. But the two are an odd couple politically.

During the 2020 election, Howard, a longtime Democrat, participated in a Happy Days reunion conceived as a fundraiser for the Wisconsin Democratic Party, and he tweets regularly from a centrist Democrat point of view, sharing news stories critical of Trump and videos of stars like Beyoncé endorsing Joe Biden. Vance’s social media persona reflects more of the pugilism of his self-professed hillbilly roots. When he tweeted recently that “as a parent of young children and a nationalist who worries about America’s low fertility I can say with confidence that daylight savings time reduces fertility by at least 10  percent,” a Princeton historian compared Vance’s language to a 1920 white supremacist book that warned white people were being engulfed by more fertile people of other races, and a Duke gender studies professor deemed the tweet “creepy.”

Vance, who said the tweet was an attempt at a joke, replied, “Good to know what’s en Vogue among our academic mediocrities.” In sharing a tweet of journalist Jemele Hill’s comparing Amy Coney Barrett unfavorably to Ruth Bader Ginsburg, he commented,  “So many of our media personalities and politicians are total children.”

Vance’s politics are not clear-cut, however, and he has been critical of Republican policies that favor the wealthy, including Trump’s tax plan.

For all their offscreen political engagement, Vance and Howard’s movie is ironically being critiqued for its lack of message. Los Angeles Times film critic Justin Chang calls Hillbilly Elegy “an extended Oscar-clip montage in search of a larger purpose” and Vox’s Alissa Wilkinson writes that the film is “distractingly Hollywoodified, a rich person’s idea of what it is like to be a poor person, a tone-deaf attempt to assuage a very particular kind of liberal guilt.” The makeup and costumes have been pilloried on Twitter. 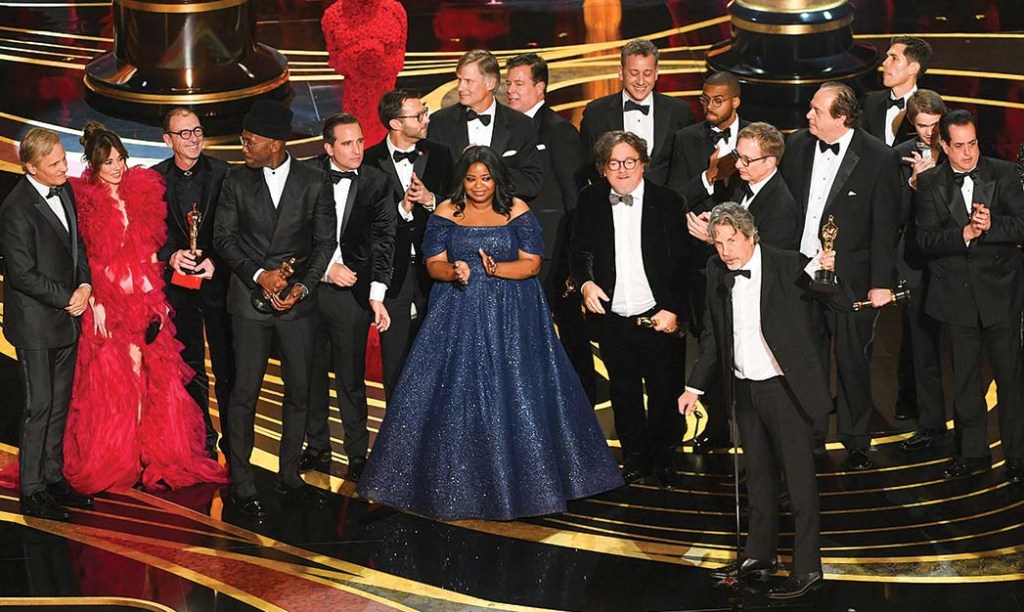 With Oscar winner Howard behind the camera and six-time nominee Adams and seven-time nominee Close in front of it, the movie seemed a likely candidate for awards, though with such scathing reviews the odds of Oscar nominations seem increasingly slim. Were Hillbilly Elegy to undergo a normal, non-COVID awards season — with countless panels and events where cast and crew would be asked about its message — the issue of Vance’s politics would undoubtedly come into play for Oscar voters. Though if history is a guide, those discussions can do little to hurt a movie that has already won over its audience, as happened when Green Book won best picture in 2019 despite a furious social media debate over whether the movie engaged in whitewashing.

“If a movie has an emotional  impact on the audience, the audience doesn’t like to be told by social media pundits that what they feel is wrong,” says Tony Angellotti, the Oscar strategist who ran the Green Book campaign for Universal. “The response was, ‘I don’t care what they’re saying, I love that film.'”

Back at the Cinema 10 in Middletown, with the theater operating at the 20 percent capacity required by Ohio law during the pandemic, the movie sold out multiple screens on a Tuesday night in mid-November, a rare business bright spot during a period when major studios are holding back their tentpole films. Ultimately, the true audience for the film may be hard to parse — Netflix does not allow theaters to release grosses, and the streamer will likely share data about Hillbilly Elegy publicly only if the movie is a hit on its platform.

Hollywood has yet to start greenlighting movies that attempt to speak to the Americans who voted for Trump a second time, but Hillbilly Elegy may serve as a cautionary tale. A movie that posed Vance’s conservative cultural critiques more directly likely would not have gotten made in the first place in Hollywood. But one that stripped Vance’s story of its political message is taking a beating from critics — and facing an extra hurdle with audiences.

This story first appeared in the Nov. 18 issue of The Hollywood Reporter magazine. Click here to subscribe.