The film business celebrated Christmas early over the Nov. 11-13 weekend when Paramount’s Arrival, a sci-fi drama with barely any explosions, was among several films benefiting from a post-election surge in moviegoing. The Trump bump was welcome especially because midrange titles like Arrival (budget: $47 million) have struggled to compete as audiences increasingly resist seeing all but the biggest-event movies in theaters.

So far this year, 36 percent of domestic box-office revenue is concentrated among the top 10 films, the highest percentage in recent memory, furthering a divide that opened up last year. Veteran film executive Adam Goodman of Le Vision Entertainment notes fewer movies are reaching the $100 million threshold domestically. “We keep pushing the extreme between winners and losers,” he says.

More parity is needed if the usual year-end crush of awards contenders — both major studio and indie pics — are to participate in holiday merriment alongside the parade of tentpoles: Warner Bros.’ Fantastic Beasts and Where to Find Them — debuting to nearly $220 million over to the Nov. 18-20 weekend — Disney’s Moana (Wednesday), Star Wars spinoff Rogue One (Dec. 16) and Universal and Illumination’s Sing (Dec. 21). The sci-fi romance Passengers (Dec. 21), starring Jennifer Lawrence and Chris Pratt, likewise has ambitions to be an event film. “The holidays are looking a lot more like the summer blockbuster season,” says box-office analyst J.T. Bock. “Event culture is taking over.”

Historically, even the biggest movies launching before Christmas haven’t generated summerlike openings because families tend to be distracted with holiday preparations. James Cameron’s Avatar debuted on Dec. 18, 2009, earning $77 million in its first weekend before making $2.89 billion globally to become the top-grossing film of all time. That changed last year when Star Wars: The Force Awakens launched over the Dec. 18 weekend to $248 million domestic for Disney and Lucasfilm. The sequel went on to gross $2.07 billion worldwide, helping kickstart what has become a record-setting year for Disney. The studio’s domestic market share alone was at a staggering 24 percent ($2.3 billion) on Nov. 17, and it is virtually assured of setting an industry record with more than $7 billion total in 2016 global revenue (despite two bombs, Alice Through the Looking Glass and The BFG).

Disney remains the model studio, boasting the four top-grossing films of 2016 so far: Marvel’s Captain America: Civil War ($1.15 billion), Pixar’s Finding Dory ($1.03 billion), Disney Animation’s Zootopia ($1.02 billion) and, from its live-action studio, The Jungle Book ($967 million). If Disney Animation’s Moana and Lucasfilm’s Rogue One deliver as expected, each silo in the Magic Kingdom will have had at least one major hit. “This is the first year that all five of our high-profile brands are each delivering at least one picture,” says Disney distribution chief Dave Hollis. 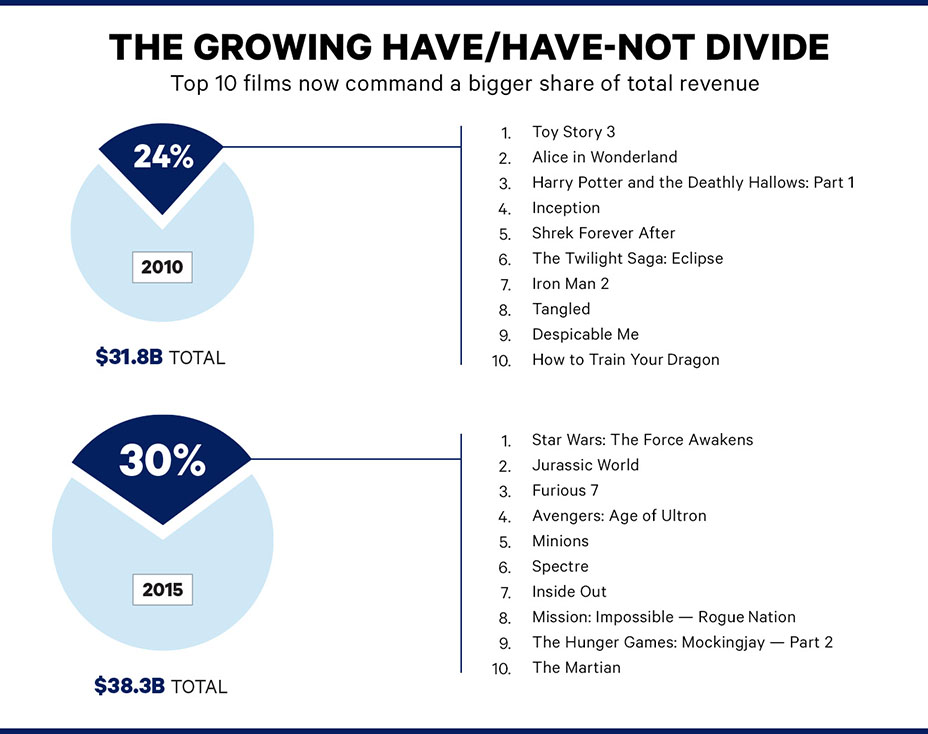 Moana is tipped to win the five-day Thanksgiving crown but could find itself in a race with holdover Fantastic Beasts, the Harry Potter spinoff from Warner Bros. and J.K. Rowling. After that, smaller crowd-pleasers will do their best to compete. In all, 15 high-profile awards contenders are launching in select theaters before year-end.

The question is whether audiences will find the smaller pics. Some analysts believe that after a uneven year quality-wise, the holiday stretch features an unusually strong lineup of potential breakouts, both large- and small-budget. Others believe the tentpoles will snuff out everything else. If so, says Bock, “we’re going to see more and more studios offering up not just one but a couple of big-budget extravaganzas over the holiday season.”