Who hauled tarps up the Santa Monica Mountains to change an iconic sign to “Hollyweed” hours before Los Angeles woke up on Sunday? It’s a mystery for now.

But the Hollywood Sign Trust, the non-profit organization that oversees maintenance for the landmark, is looking to improve its security in the wake of this rare high-profile prank.

“The Hollywood Sign surveillance system is constantly evolving but an incident like the one that occurred early Sunday morning shows us where there are opportunities to make improvements,” Chris Baumgart, chairman of the Hollywood Sign Trust, said Monday in a statement to The Hollywood Reporter.

“The new year’s prank was no exception and we will be deploying additional technology to tighten up surveillance and thus deter unwanted visitors in the future,” said Baumgart. “This is more than preventing pranks or trespassing at the sign. Our concern is the safety of the neighborhood and the trespassers that put themselves at risk because it is extremely unsafe to be on the sign, let alone traversing the treacherous hillside that is home to those 9 famous letters.” 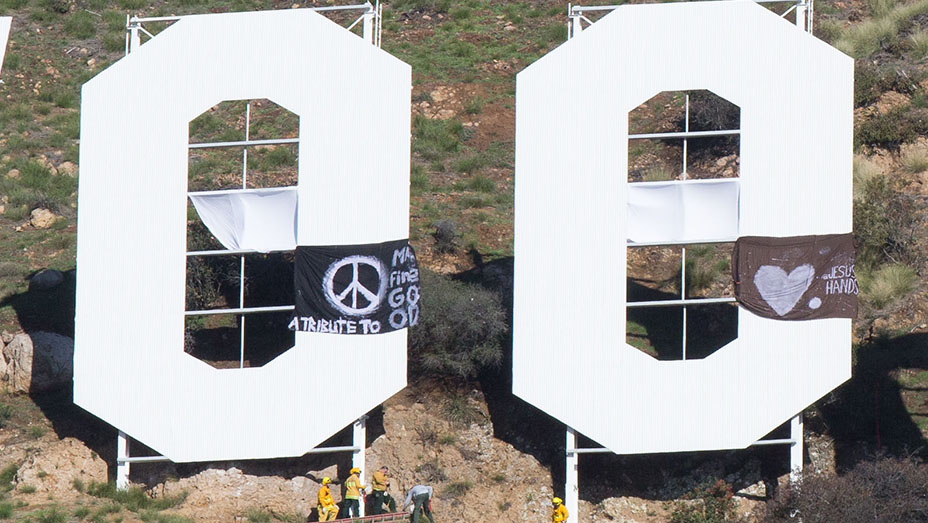 On Sunday, as the industry was ringing in 2017, a prankster or vandal or activist (or all three?) managed to hang white and black tarps over the latter two “O” letters on the landmark. The individual or individuals responsible committed a trespassing violation, Los Angeles police officer Mike Lopez told THR. But there has been no arrest made or suspect publicly identified.

A peace sign was etched in white on one of the black tarps, along with the words “A tribute to…” The other tarp had a heart shape on it and some writing. It’s unclear if there was a message to the sign aside from the reference to California opting to vote for marijuana legalization in the November election.

The sign was said to be restored to normal conditions mid-morning on New Year’s Day, with no noticeable enduring damage. Multiple workers could be seen in photos using a ladder to remove the tarps. By Monday, from a distance, it looked as it usually does on a cloudy day.

The sign is currently watched over by a security camera system that is monitored by the Los Angeles Police Department. It was first installed in 1994 and updated several times since.

The icon has occasionally been used to promote political messaging. In 2010, the sign was covered with red and black lettering with the words “Save the Peak” in an attempt to raise awareness about development. 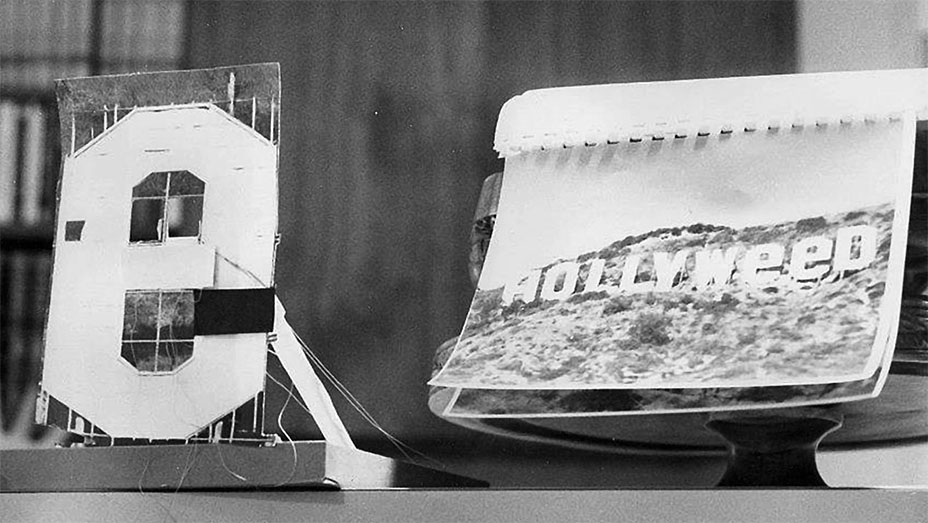 Famously, in 1976, the sign was turned into “Hollyweed” by a then-student named Daniel Finegood and three others for an art project for Cal-State Northridge over the course of several hours.

When his son, Matthew Finegood, saw images of the new “Hollyweed” prank he immediately thought it was a throwback to the work of his father. “He spent about $50 on giant, four sheets — two black, two white — tied them to some stones, climbed on the sign a little bit to throw the stones and the rope over that was tied to the sheets,” Finegood told THR. “So there was a lot of planning.”

Added Finegood, “He was adamant that it really wasn’t a prank. He was doing something that didn’t harm the sign. He felt it was art and he was trying to tell the world something he believed in and that people were supportive of.”

Daniel Finegood, who wasn’t arrested for the 1976 “Hollyweed” prank and passed away in 2007, would ultimately alter the Hollywood sign four times during his lifetime: to “Holywood” (also in 1976), “Ollywood” (in 1987) and “Oil War” (taken down before the end of a night in 1990). He also aspired to do an April Fools’ Day joke to make the entire sign disappear into the backdrop of the hillside, but the plan never came to fruition, his son said.

For now, the identity of the new “Hollyweed” prankster is obscure. “I think it was great execution that it was done in that way,” said the pseudonymous artist known as Plastic Jesus, when contacted by THR. “You want the message to be the focus of the work and not the artist.”

Plastic Jesus, who said he had no involvement in the new prank but has made headlines for his provocative Oscar-themed art in recent years, says he recently spoke with Los Angeles-based street artists who didn’t know who would have been behind the new altered sign.

Jackass star Steve-O — himself arrested in 2015 for a Hollywood crane protest that included a sign saying “Seaworld Sucks” — pointed out as much when he took a selfie in front of the “weed” prank on Sunday. He wrote: “I don’t know who did this to the Hollywood Sign, but I’m quite impressed they got away with it.”

After more than a day with no word about a suspect, the incident is developing into a bit of a Hollywood mystery. Asked why the new prankster hasn’t yet come forward, Finegood joked: “Maybe he’s still on his plane to Amsterdam or Ecuador.”

War Over Hollywood Sign Pits Wealthy Residents Against Urinating Tourists: "One of These Days Someone Will Get Shot"