It’s Halloween. Two evenings have passed since Anthony Rapp went public with Kevin Spacey’s alleged pedophilic advances. Tomorrow, Brett Ratner’s and Dustin Hoffman’s predacious behavior will make headlines. But for 90-year-old Hollywood enfant terrible Kenneth Anger — the pioneering gay underground filmmaker — the news since Harvey Weinstein’s fall collectively elicits a shrug. After all, aside from his noted contributions to avant garde film (hailed by everyone from Scorsese to Sontag), Anger also is the industry’s oldest living scandalmonger, the author of the 1970s best- seller Hollywood Babylon and its sequel — salacious and much disputed histories of Golden Age cinema.

“Hollywood is very good for producing scandals; it’s been producing them since the very beginning,” says Anger over a burger and Coca-Cola at the Hollywood Roosevelt Hotel before speaking at a nearby event in honor of his late friend Anton LaVey, the Church of Satan founder. (Anger, who directed LaVey in Invocation of My Demon Brother, has a tattoo reading “LUCIFER” on his chest.)

Revisiting the Babylon books in the current climate is a reminder that while the entertainment industry has grown to see itself as something of a moral force over the past century, the rest of the country never subscribed. Hollywood has always been, in Anger’s words, a “synonym for sin,” a paradisiacal place where glamour lives and ethics don’t.

Mark Ebner, author of the Babylon-esque Hollywood, Interrupted with late conservative activist Andrew Breitbart, observes that Anger’s singular blend of besotted fascination and moralism is on display in another media and culture provocateur, Matt Drudge. “He has the Anger touch,” says Ebner of the right-wing Drudge Report‘s entertainment coverage (Breitbart worked for Drudge for years). 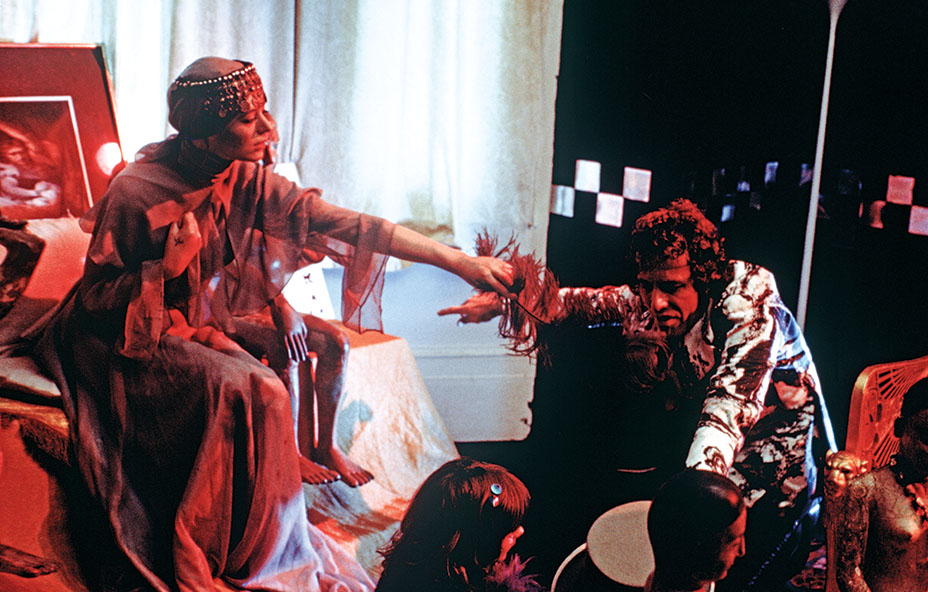 The San Pedro-based Anger, who attended Beverly Hills High School, was long known for his prickliness and reclusiveness. Now in his hard-of-hearing dotage, gap-toothed and beatific of bearing, he’s pleased to discuss his next project: the experimental short film Airships, involving rare vintage footage of his “favorite mode of transportation,” zeppelins, one of which he rode as a young boy with his grandmother, a United Artists costume designer.

It’s likely the caboose of a career that began a few years after he graduated from Beverly Hills High with Fireworks, a canonical queer short filmed in 1947 (Alfred Kinsey purchased a copy), and went on to include collaborations with everyone from Manson Family murderer Bobby Beausoleil to Mick Jagger and Marianne Faithfull. John Waters calls Anger’s oeuvre the “brave celluloid track record” of an artist “scarily beneath, above and beyond the real thing.” The Film Society of Lincoln Center’s director of programming, Dennis Lim, notes that his editing and use of music “anticipated the music video form by decades.”

The Babylon books, written with a mischief bordering on malice, are not so revered. Even ardent Anger fans find it difficult to reconcile the sensitivity of his films with the sleazy arsenic of his books, which have been accused of unfairly tarnishing the reputations of such stars as Fatty Arbuckle and Clara Bow. (His claim that Bow slept with the entire USC football team has been disproved.) “I can’t clarify much,” he says, sipping his soda, though he admits his research was conjured primarily from secondhand gossip gleaned from his grandmother’s colleagues. “It’s Jekyll and Hyde, but it’s all me.”

Anne Helen Petersen, author of Scandals of Classic Hollywood, which sought to rehabilitate parts of the pantheon she believes Anger smeared, contends that he exacerbated his already ill-informed accounts with an ungenerous perspective, one particularly at odds with a marginalized outsider like himself. “The way he framed things, it made homosexuality, female sexuality, interracial relationships — even being fat, in Arbuckle’s case — into transgressions, amplifying and embroidering instead of normalizing,” she contends.

Anger professes amused bafflement at the critique. “I wasn’t trying to do a puritanical denunciation of Old Hollywood,” he explains. “It was a terrific cast.” And what about the current cast — is it worthy of another sequel? Anger sighs. “I’m afraid the present generation is pretty pallid.” (In fact, he has long had notes for a third Babylon, many pertaining to stars in the Church of Scientology, but decided it wasn’t worth the fight to publish: “They like to put people on their enemies list.”)

His own plot arc, of course, is reaching its denouement. “I haven’t really thought of where I’ll end up as a corpse,” says Anger, who has no children. “I really don’t care, but I’ve got lots of friends at Hollywood Forever [Cemetery], and I go visit there from time to time.” His mind whirs, and he flashes an enchanted grin: “Oddly enough, Paramount Pictures, right next door, is constructed over an ancient cemetery. Under the soundstages are hundreds of bodies. They built right on top of it. It’s like a secret that Hollywood doesn’t want people to know.” Paramount, unsurprisingly, disputes the lurid claim.