On paper, the lineup of tentpoles set to unfurl between early May and Labor Day looks impressive — Alien: Covenant, Wonder Woman and rebooted outings in the Alien, Spider-Man, Transformers, The Mummy and Pirates of the Caribbean franchises, to name a few.

But many Hollywood studio executives, after penciling in estimates for both their own and their rivals’ titles, are forecasting a domestic dip from last year’s $4.5 billion summer box-office season. One studio number cruncher puts the decline as high as 10 percent. Two others agree that, absent surprises, 2017 won’t match 2016. If their pessimism is correct, this summer is shaping up to be the worst since 2014, when ticket sales plunged to $4.1 billion, a drop of more than 14 percent year-over-year and the sharpest downturn in three decades.

The summer box office got off to a strong start last weekend thanks to Disney and Marvel’s Guardians of the Galaxy Vol. 2, but Hollywood is now bracing for what is likely to be the season’s first major miss: King Arthur: The Legend of the Sword, which hits theaters Friday. Directed by Guy Ritchie, the movie cost Warner Bros. and Village Roadshow $175 million to make before marketing, yet is only tracking to open in the $25 million range. If so, King Arthur will need to do mighty business overseas.

“Worldwide grosses should be fine. It is domestic I’m concerned about,” says box-office analyst Jeff Bock of Exhibitor Relations. Shrinking domestic theatrical revenue would make studios more reliant on overseas audiences at a time when exchange rates are not favorable and China is showing signs of a slowdown. In 2014, the summer stateside slip was offset by an annual 4 percent climb in international box office. However, overseas ticket sales in 2016 were slightly down for the first time in years.

A lackluster summer would also raise questions about the wisdom of releasing blockbusters that can often cost $200 million every weekend, or every other weekend, at least through most of July. “We saw what happened with the downturn of sequels last summer. If that happens again, studios will be forced to make sweeping changes,” says Bock. “Bottom line, over the past two summers, the most talked-about entertainment was Stranger Things and Game of Thrones,” two TV hits from Netflix and HBO, respectively. If this summer’s slate can’t attract throngs of ticket buyers, it may indicate U.S. audiences have grown weary of what have been Hollywood’s most reliable products.

“Making movies for the broadest possible audience is getting tough,” adds 20th Century Fox domestic distribution chief Chris Aronson, whose studio enjoyed a crucial victory when deciding to go a different route with Deadpool in 2016 and make the superhero film R-rated. It did the same with spring 2017 hit Logan. 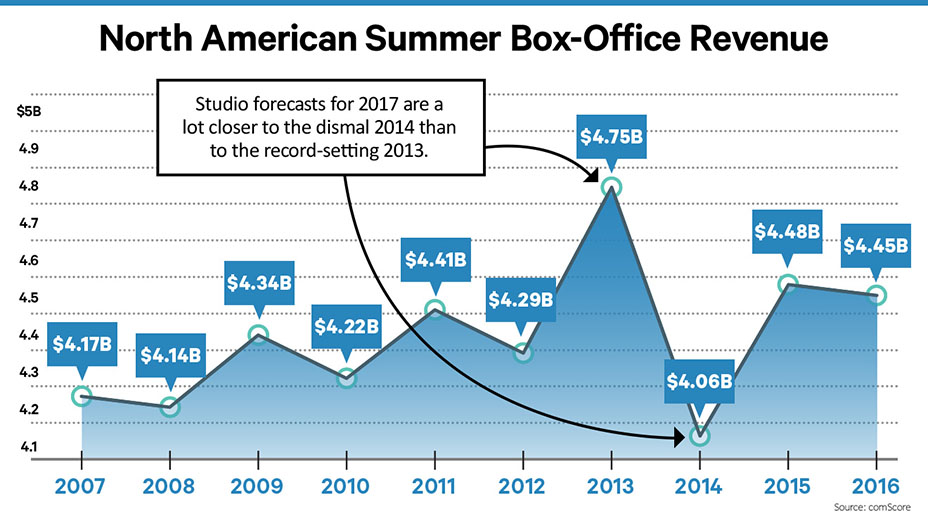 But if the studio forecasters are right, the only film this summer with a sure shot of crossing $400 million in North America is Guardians Vol. 2, following its $146.5 million opening weekend in North America. The other near-certain colossus on the summer schedule is Universal and Illumination’s Despicable Me 3 (June 30), which is projected to roughly match the $368 million brought in by its 2013 predecessor.

But beyond those, the calendar is filled with big question marks. Will the domestic haul of Disney’s Pirates of the Caribbean: Dead Men Tell No Tales (May 26), the fifth film in the 14-year-old franchise, be more like $423 million for 2006’s Dead Man’s Chest or $241 million for 2011’s On Stranger Tides? And will Sony and Marvel’s Spider-Man: Homecoming (July 7) — the third iteration of the franchise — match the $262 million debut of The Amazing Spider-Man in 2012, or come in closer to The Amazing Spider-Man 2‘s $202.9 million in 2014? Similarly, can Paramount’s Transformers: The Last Knight (June 21), the fifth movie in the decade-old series, cross the $300 million mark like the first three installments or top out closer to Age of Extinction‘s $245 million in 2014?

“The challenges are several,” says Megan Colligan, Paramount’s worldwide president of marketing and distribution. “And when a big movie is coming out every two weeks or so, you churn through your releases more quickly.”

Also dampening the forecasts: There’s no obvious tentpole slated in August, a month that launched Suicide Squad last year and the original Guardians of the Galaxy, which was 2014’s biggest summer domestic hit with $333 million. “August is a downright ghost town compared with the previous three months,” Bock says. “Let’s hope the light shines upon The Dark Tower,” the Stephen King adaptation from Sony opening Aug. 4, “because that is really the only film that can save August and pro­pel the domestic summer total toward $5 billion.”

Adds Warners domestic distribution chief Jeff Goldstein: “The audience is much more fragmented these days. At the same time, there are always outliers in the summer, and revenue year-to-date is up 3.5 percent. Sometimes you hold your breath.”

One of those outliers could be Christopher Nolan’s World War II action-epic Dunkirk, which Warners opens July 21. Dunkirk stands apart from the summer’s other big-budget event films in that it’s original. There’s also Paramount’s Baywatch (May 25), an R-rated adaptation of the classic television series, while Alien: Covenant (May 19) and War for the Planet of the Apes (July 14), both from Fox, are both expected to be solid swings. There’s also a bevy of non-event films that could help fill in any revenue deficit if they work, such as Sofia Coppola’s The Beguiled and Kumail Nanjiani’s The Big Sick (both open June 23), Edgar Wright’s Baby Driver (June 28), Atomic Blonde (July 28), Kathryn Bigelow’s Detroit (Aug. 4) and Steven Soderbergh’s Logan Lucky (Aug. 18).

Box-office analyst Paul Dergarabedian of comScore is among those who remain optimistic: “Despite what will likely be a see-saw summer, I think we could even beat last year if the sequels connect with audiences this summer in a way that they clearly didn’t in 2016. And don’t count out these other films.”