“My cousin Larry is a liberal who says the reason the U.S. is rich is because we’re imperialists who steal from other countries,” comedian Evan Sayet begins.

“I told Larry, ‘Look, the reason the Sudanese don’t have cable TV is not because we stole it from them. They don’t have it because, when you’re hacking off the heads of a million of your citizens, chances are, one of them may have been the cable guy.’”

The joke targeting the left is one of many that Sayet has been telling audiences for months, including a group of 200 in Ventura, Calif., a few weeks ahead of Tuesday’s midterm election. Attendees that night were overwhelmingly activists from groups like the Jewish Republican Alliance and the California Federation of Republican Women. They were there not only to yuck it up with one of the premiere conservative comics on the circuit, but also to meet with constituents and learn from Sayet a few clever ways to sway opinion with humor.

“I have no problem preaching to the choir. Just because they know the tune doesn’t mean they understand the words,” says Sayet. “I want them to be so obvious, to convince people there’s no reason for anyone to even entertain what the left has to say because they are so ludicrous.”

The effort from Sayet, a former writer on Politically Incorrect, is just one of several ways Hollywood’s small group of conservatives are trying to get out the vote for Republicans. Beyond Kid Rock singing a few songs at a rally in Michigan to promote Senate candidate John James, it isn’t as flashy an effort as having dozens of celebrities appearing on television to entreat their fans to vote Democrat.

Nor is it as attention-grabbing as having Oprah Winfrey knock on doors in Georgia on behalf of gubernatorial candidate Stacey Abrams; or having Barbra Streisand cut a record bashing President Trump; or hiring Jimmy Buffett to perform a free concert on behalf of Florida Democrats Andrew Gillum and Bill Nelson.

But the lack of flash shouldn’t be confused with a dearth of passion from the Hollywood right; it’s just that partisanship has become so “toxic” — a word used over and over by conservatives in the industry who spoke to The Hollywood Reporter — that they are skittish about doing anything publicly in the Trump era when it comes to their personal politics.

“There used to be more of us. Tom Selleck, Jon Voight, Bruce Willis, who were outspoken, but they’ve been browbeaten and ridiculed, which is the main instrument on the left to shut us up,” says Pat Boone.

But the 84-year-old crooner who sold 45 million records in the ’50s and ’60s is one of the few who is not shutting up, thus he has made robocalls on behalf of John Cox for California governor, and for representatives Dana Rohrabacher of California and Marsha Blackburn of Tennessee.

“We need a proven leader, a businessman in charge of California’s business, as we had before, in our best days. Yup. In the mold of Ronald Reagan,” says Boone in a robocall for Cox.

“If I win in a squeaker, Pat Boone will have made the difference,” says Rohrabacher. “I’m being outspent 10-1 because of billionaire leftists, but I’d rather have Pat. He’s the most beloved Hollywood figure over 60 years old. He’s trustworthy. He gives me credibility with that demographic.”

It’s not the first time Boone’s been told how effective his telephone pleas have been, as the singer is an occasional confidante of Trump, and White House insiders say his 3 million robocalls in 2015 targeting Christian senior citizens may have made the difference in swing states two years ago. “Trump called me on the golf course and I told him I wish he’d stop calling people names because it sounds like schoolyard stuff, and I bet your own wife is telling you this,” Boone recalls. “He chuckled, but he didn’t change anything.”

Even non-celebrities in the industry who are conservative fear mixing it up with their liberal colleagues, lest they be “outed” as Trump supporters, thus there are secretive efforts to drum up votes for their side, the most visible being street art.

Ten days ahead of the election, one such artist, a studio worker on the creative end of the TV and film industry, posted eight faux traffic signs in the more disheveled portions of downtown Los Angeles that are meant to promote Cox for governor over his liberal opponent on the issue of illegal immigration. “Notice: Tijuanification in Progress. A gift from Gavin Newsom & the CA Democrats. (Paid for by your taxes),” reads the sign.

The artist hung them very early one morning with the help of an off-duty law enforcement official, and they are so realistic that a week later they still hadn’t been removed.

Prior to the “Tijuanification” signs, the artist (with bicoastal assistance) hung in Los Angeles, Chicago and New York dozens of posters with a giant image of Kanye West and the text: “Keep America Great. #Kanye 2024,” and the rapper/Trump supporter tweeted out a photo and news story. West recently distanced himself from politics after some Republicans used his name to push their own brands, but that doesn’t matter to the street artist, who hides his identity as if it were a matter of national security.

“Kanye is the biggest cultural breakthrough this year, even if he’s backing down. The benefit we got from him cracking the dam has been massive,” says the artist. “When he told people to read Thomas Sowell, it almost made me cry.”

Even party pooh-bahs aren’t encouraging right-leaning entertainers to tip their political hand nowadays. “If a young, emerging star campaigned for Republicans, he would quickly be out of work,” says Shawn Steel, the Republican National Committeeman for California. “Kanye West is the best example of a figure who got burned. The PC culture along with the left-wing #MeToo hardening makes it difficult to have an independent voice, even a moderate voice, in Hollywood.”

As for the street artist, he was also part of a team that made worldwide news in December by plastering all over Hollywood images of Meryl Streep next to Harvey Weinstein with, “She knew” written across her eyes, an homage to the work of artist Barbara Kruger. Sometimes the conservative street artist is hired for his missions, sometimes it’s a labor of love that can cost him as much as $2,000 of his own money. “We should be waging a constant propaganda war with the left, but I already have a full-time job,” he says. 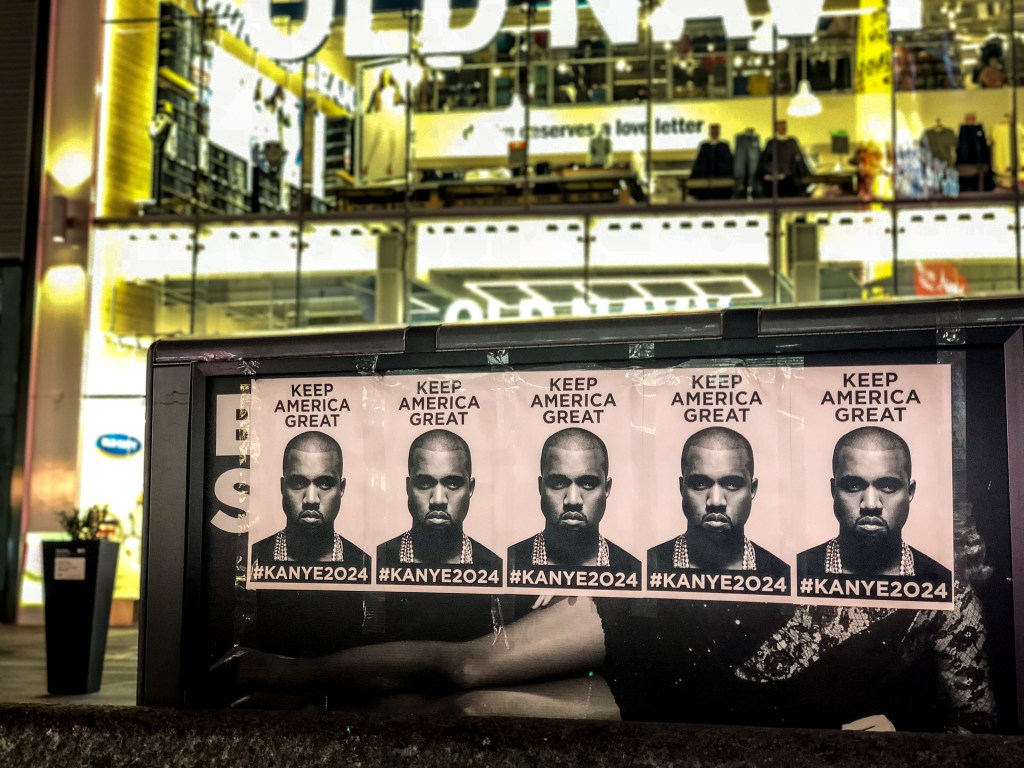 Any way you slice it — behind the scenes or out in the open — the effort from Hollywood conservatives for Tuesday’s election isn’t as robust as it was two years ago, when a vocal (but still tiny compared to Democrats) cadre of conservatives like Antonio Sabato Jr. and Scott Baio stumped for Trump. In part, the more-minimal effort this time around is due to the demise of Friends of Abe and the Hollywood Congress of Republicans.

HCR was an out-in-the-open group of about 300 members run by actors Mark Vafiades and Mell Flynn, though when the former took a job in the Trump administration as a communications executive, the couple moved to Washington and the group folded.

FOA, on the other hand, was a private group of 2,500 conservatives that featured gatherings where rank-and-file workers in the entertainment industry mingled with celebrities like Kelsey Grammer, Gary Sinise, Patricia Heaton, Dennis Miller, Robert Duvall and the late Andrew Breitbart. In its heyday, vast parties on sprawling grounds featured speakers like Trump, Rush Limbaugh, late Supreme Court Justice Antonin Scalia and big-name celebrities who played their conservatism close to the vest, but FOA was outed when the IRS under President Obama balked at approving its application for tax-exempt status, and the group gradually disintegrated.

Its members, though, remain connected, and many will be at various election-viewing parties Tuesday. Good luck getting an invitation, though, unless you come highly recommended with a stellar reputation for keeping a secret.

Sayet, for example, is hosting one at an undisclosed location for more than 100 “working showbiz patriots.” Attendees include film producer Frank DeMartini, who is hosting a group of his own at Sayet’s party. “We need to keep entertainment industry conservatives together so we can speak with a united voice,” says DeMartini, who was hoping to be on the ballot Tuesday as an alternative to Rep. Maxine Waters, though he lost the Republican primary. 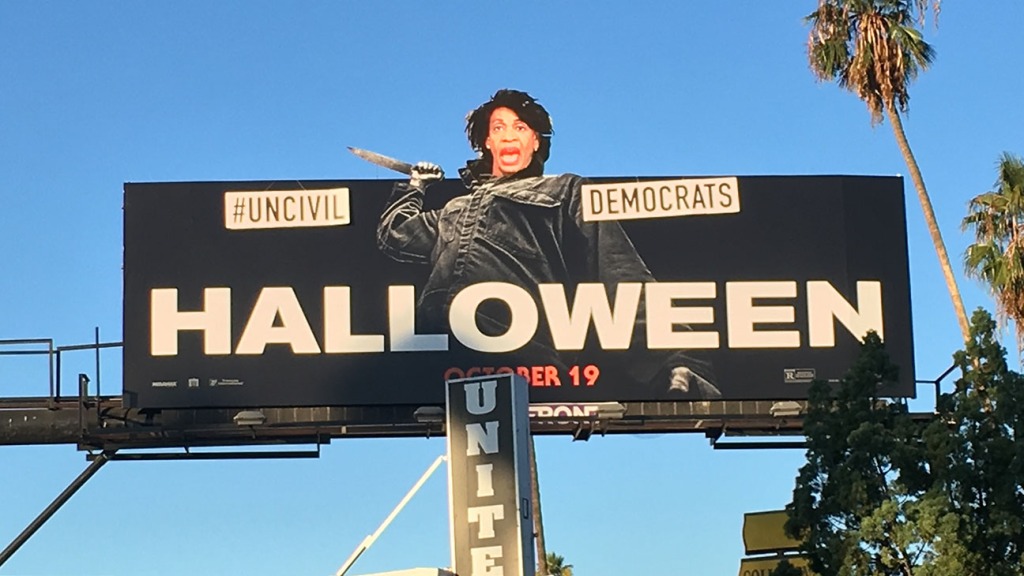 At a different election-night party, a host will display photos of Megyn Kelly alongside Jimmy Kimmel and Jimmy Fallon from when they appeared in blackface on TV sketches two decades ago. “Just to remind my guests of the hypocrisy of the left, where if you’re a conservative who merely broaches the topic you’re fired but if you’re a liberal who actually does it on TV you’re protected.”

Like Boone, filmmaker Dinesh D’Souza doesn’t much care what Hollywood liberals think of him, thus he’s in the midst of a 10-day speaking tour to promote conservatism and denounce modern-day liberalism ahead of the midterm elections.

D’Souza’s latest film, Death of a Nation, not only demeans the history of the Democratic party, but also likens the passionate opposition to Trump to that of President Lincoln in the 19th century. Box office was less than $6 million, but ahead of the midterm election the DVD looks like it could be a bigger hit than were his previous three films, and the Texas Patriots PAC has been mailing thousands of discs to undecided voters.

“I’m watching with interest,” says D’Souza. “It sets things up for 2020. I want to see if the movie has a big impact on swing voters.”

“The power of Death of a Nation is it attacks the prevailing narrative,” he says. “It’s very different from a yard sign or a paid commercial. It’s a sustained, 90-minute, intellectual and emotional narrative.”

D’Souza is raising funds for his fifth film, which shoots next year and should be in theaters in time for Trump’s reelection bid. “We make movies with very sensible economics,” says D’Souza. “I call it recycled philanthropy. I tell investors, ‘Look, I’ll get you your money back so that you can do it again.’”

Sayet, meanwhile, doesn’t mind being in the minority, but says, if nothing else, liberal entertainers should at least consider jumping ship for their own well-being.

“Nothing is more important to an artist than free speech,” says the comedian, “and the left has made it clear they don’t believe in the First Amendment because hate speech isn’t free speech. And they define ‘hate speech’ as anything they disagree with. If you’re an artist first, you should be voting Republican.”