Hollywood-loved interior decorator Kelly Wearstler — whose clients include Ben Stiller, Cameron Diaz and Gwen Stefani — and her developer husband Brad Korzen are rolling out their plans to redefine the luxury hotel market. In partnership with Brian De Lowe in the Los Angeles-based company Proper Hospitality, the trio (previously behind hotel brand Viceroy until 2010) is rapidly expanding its luxury hotel footprint since the debut of San Francisco Proper Hotel in 2017.

Six years in the making, the Santa Monica Proper Hotel opened in late June at the corner of Wilshire Boulevard and 7th Street, with plans for additional locations this fall in downtown Los Angeles (in the 1926-era building at 11th Street and Broadway, most recently a YWCA) and in Austin, Texas (at 600 West 2nd Street near Lady Bird Lake). De Lowe told The Hollywood Reporter that the group is also scouting Portland, Oregon; Nashville; New York; Miami; and resort areas “from Wine Country to the coast and the mountains.” The goal is to “fill a void somewhere between the traditional five-star hotel, that offers luxurious services and great hospitality, and boutique hotels with exciting food and design that are more connected culturally with a neighborhood.”

Proper Hospitality additionally rents a five-bedroom Malibu beach house (complete with a movie room, game room and private beach space) at Carbon Beach on the Pacific Coast Highway for $6,500 to $9,500 per night, and the Austin location will uniquely include 99 for-sale residences atop a 244-room hotel. (The group’s initial extended-stay Proper on Sunset Boulevard, which opened in 2016 and with rents going for up to $22,500 per month, is now defunct, and the company is primarily focused on short-term stay properties, said De Lowe.) 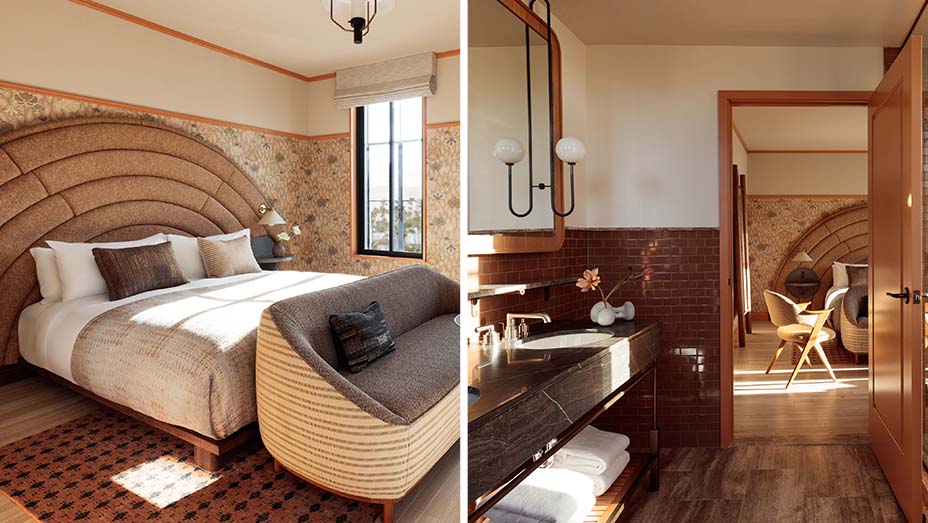 “Each hotel has a story,” Wearstler told THR. “The story I created for San Francisco was about this woman Gilda and her cat, inspired by a vintage piece of art that I had found at a gallery in Paris. The design was all about tapping into the cool, modern vibe of the city mixed with its historic, classic European influences, as reflected in the architecture of the landmark building. Santa Monica is a collection of smaller stories within the larger story of new and old coming together in a seaside city with a relaxed but sophisticated sensibility. There’s a moody, California maritime story for the reception with artful interpretations of iconic coastal elements.”

Such references include a naturally pitted travertine table; a wood and canvas wall sculpture reminiscent of a sail; a chair inspired by a crustacean; a hand-carved desk calling to mind a shell; and an umbrella-inspired floor pattern. Vintage finds (such as a Noguchi sofa and 1970s Uchiwa bamboo sconces by Ingo Maurer) and the warmth of Douglas fir “treated to look like driftwood” are juxtaposed with contemporary elements. Yet everything is patinated for a soft, aged feeling.

“The palette is very nature-inspired; the materiality is earthy and textural,” said Wearstler. “Within the reception is the grotto, a small room you can go into that is a library-art gallery. It features vintage art that was found in California and also works from contemporary local artists. It feels intimate and cozy like you are in somebody’s living room in a house by the beach. “

Commissioning pieces by local artists is key for Wearstler to “create a sense of soul within all the spaces.” L.A. ceramicist Ben Mendansky and L.A. artist Morgan Peck created custom installations for both the Santa Monica and downtown L.A. locations. Work by textile artist Tanya Aguiniga, sculptor Bradley Duncan and artist Kelly Lamb are also featured in Santa Monica, while stained glass from Pasadena-based Judson Studios is incorporated in the downtown L.A. design. Wearstler hints that the décor at the downtown location will feature more vibrant color and pattern, which De Lowe confirms will have a Spanish-Moroccan flair.

Another major focus for the company is creating unique culinary destinations. Amid the earthquake shakes over the July 4th weekend (a test of the new construction), the rooftop bar and bistro Calabra at the Santa Monica Proper was unveiled with a Mediterranean-influenced menu from the hotel’s executive chef Kaleo Adams. The lobby restaurant Palma is also open for business, offering small bites along with small-batch Mezcals and wines.

August will mark the debut of the highly anticipated ground floor restaurant Onda — a collaboration between James Beard award-winning chefs Jessica Koslow of Sqirl café in Silver Lake and Gabriela Camara of the 20-year-old Mexico City institution Contramar and its sister restaurant Cala in San Francisco. (Camara starred in the recent Netflix documentary A Tale of Two Kitchens, executive produced by Gael Garcia Bernal.) The fare will blend Mexican and Californian techniques and flavors. Award-winning chefs and restaurateurs Suzanne Goin and Caroline Styne of The Lucques Group (behind Lucques, A.O.C., Tavern and Larder) will helm the restaurant and rooftop lounge at the Downtown Los Angeles Proper.

“A hotel is not just a place to sleep, but to engage in,” says Wearstler. “At Santa Monica, they are integrating luxury treatments into the guest rooms. You can have everything within your own room: world-class trainers, spa treatments. There is even a ‘tuck-in’ service with a foot massage that lulls you to sleep.”

To that end, a 3,000-square-foot outpost of the Brentwood-based Surya Spa, run by ayurvedic healer Martha Soffer (whose fans include Gwyneth Paltrow, Julia Roberts, Kate Hudson and Matt Damon), is set to debut in November at Santa Monica Proper. The menu will include services based on the ancient Indian methods such as massages, facials and scrubs; steam and oil treatments; yoga; and transcendental meditation, along with plant-based tonics crafted daily.