Fantasy cars have helped define a genre of Hollywood film and now, as part of its 25th anniversary celebration, the Petersen Automotive Museum in Los Angeles is devoting an exhibition to the subject. “Hollywood Dream Machines: Vehicles of Science Fiction and Fantasy” marks the first time that the Petersen has dedicated a show to vehicles from motion pictures and television, although the museum has maintained a room of Hollywood cars from its own collection. The exhibit, which opens on Saturday May 4, will occupy three galleries and parts of the museum’s portico, drawing cars from studios, automotive design companies and private collections.

Petersen is producing the event in collaboration with San Diego’s Comic-Con Museum, and it will showcase more than 50 vehicles that have looked into the future or told stories of alternative worlds. Many of these narratives offer a dystopian vision, in which people face existentialist crises with machines as an instrument of destruction or even a threat to supplant mankind. Others are lighter and whimsical, such as the Back to the Future films and the Batman, Knight Rider and Green Hornet series of small screen fame. The cars have helped define these works, and in many cases, have been memorable in their own right for their intriguing designs. 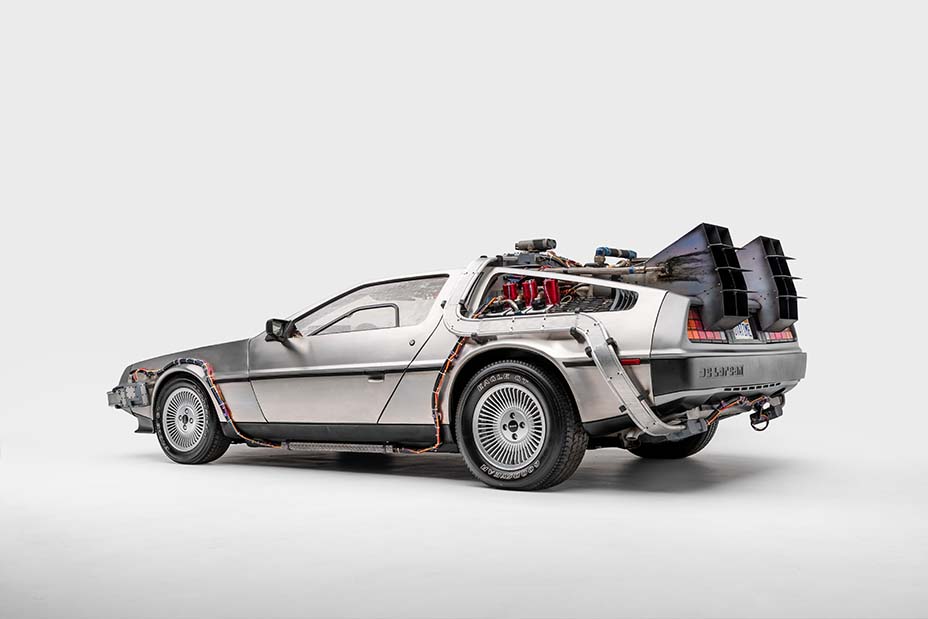 Petersen exhibitions and creative director Bryan Stevens calls science fiction cars among “the most imaginative and interesting” in entertainment. He noted that the museum was looking for an angle that would engage a wide range of ages and film-viewing experiences, while ensuring there were enough cars to fill a major exhibit. “We wanted something that would resonate with everyone from 10- to 90-year-olds,” Stevens said.

As the Petersen’s six-person staff of curators and historians dug into their assignment, they found their “Holy Grail “in science fiction and fantasy. The genre has generated visually arresting vehicles dating to 1927, when the silent film masterpiece Metropolis used teardrop-shaped, Austrian-made Rumpler Tropfenwagen sedans as part of its futuristic vision. The Petersen could not convince two German museums to loan them Rumplers, because of the cars’ fragility and key role in their permanent collections and concerns over transporting the cars, but the exhibit will include miniatures that are roughly the same size as those that Metropolis director Fritz Lang used in filming. Vehicles in the exhibition will date as far back as the 1960s.

Entertainment automotive consultant Josh Hancock, who helped select cars for the exhibit, including the Sj-7 Peacekeeper Transport from The Hunger Games, praised the museum’s approach. “It is a more intelligent, intellectual way of looking at these props,” said Hancock, “They didn’t do a straight exhibit of Hollywood cars.” 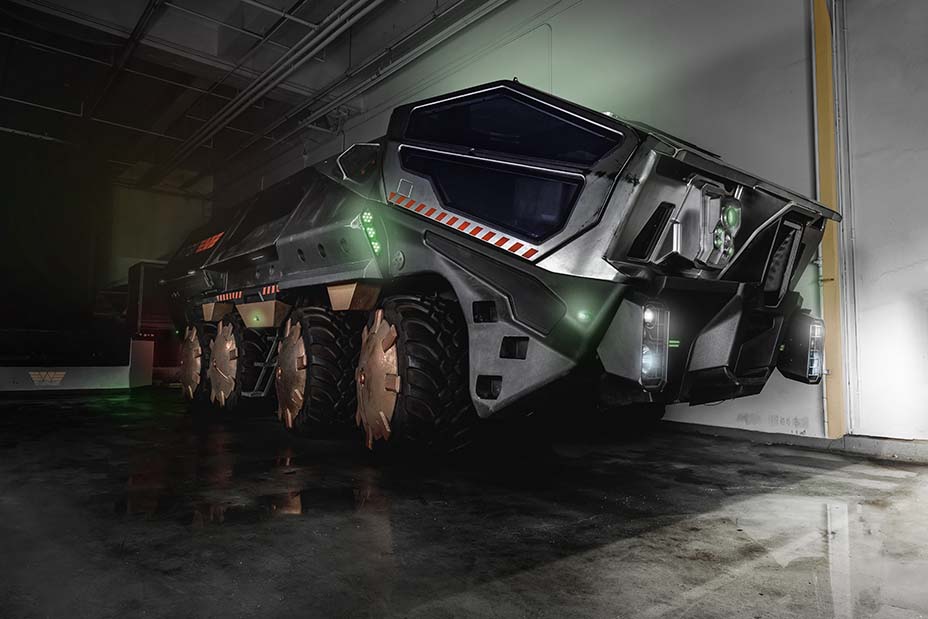 The massive Peacekeeper and the similarly sized Weyland Industries RT01 Group Transport from Ridley Scott’s 2012 sci-fi horror film Prometheus will greet visitors in the Petersen’s portico, where they have been parked for almost a month. Both vehicles were too large to angle through the museum’s delivery bays so the museum received permission to display them outside. Danny Dunkel, who helps prepare Petersen exhibits, said that fitting the eight-wheel Prometheus, which is based on a Czech military truck, into its portico space “was a workout.” But not the Peacekeeper: “It was like driving my pickup,” Dunkel said. 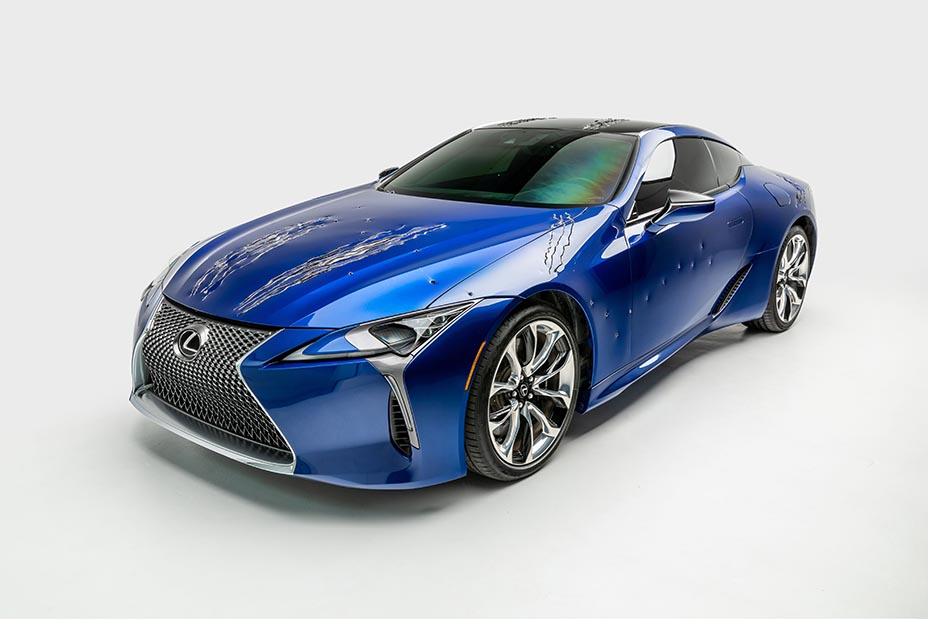 Among other cars on display in three galleries will be the the DeLorean from the Back to the Future franchise, the Warthog from the military science fiction film Halo, a Los Angeles police department Spinner from Ridley Scott’s original 1982 Bladerunner, Tony Stark’s 2008 Audio R8 from Iron Man and the Lexus LC 500 Inspiration Series from Ryan Coogler’s Black Panther — complete with panther claw marks. There is also an ultra-sleek Light Cycle from Joseph Kosinski’s Tron Legacy, a Ford Mustang ii King Cobra from James Gun’s Guardians of the Galaxy 2, and the VW bug, Bumblebee, the protagonist in Travis Knight’s 2018 film of the same title from the Transformer franchise. 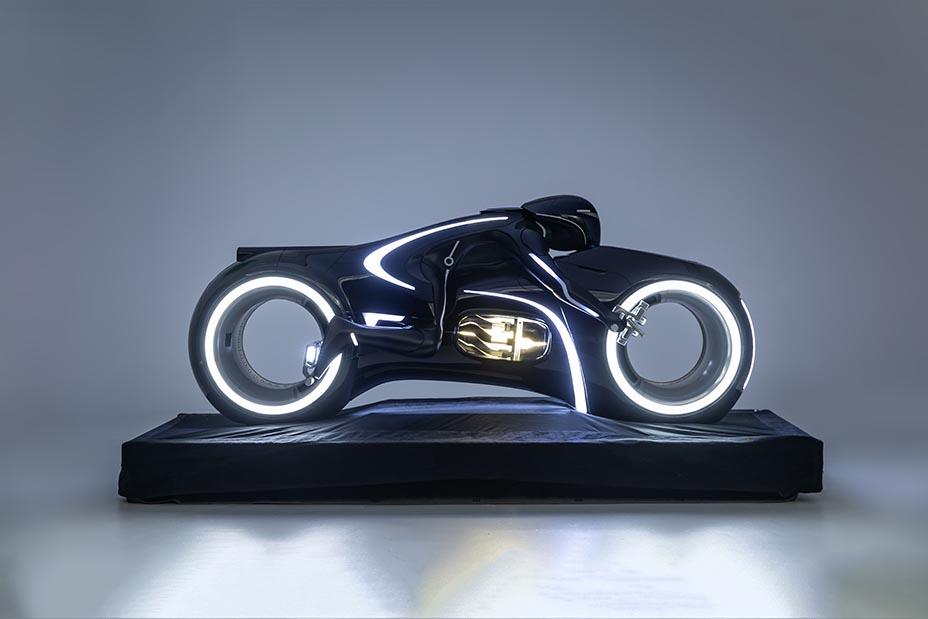 Most of the cars are on loan from studios and car design firms. But the Petersen is also pulling the iconic Batmobile that Adam West drove in the 1960s series and other vehicles from its own collection, and it has arranged loans from private owners. In addition, the exhibit will display artwork, props and costumes from the films.

A few of the vehicles were prescient. Knight Industries Two Thousand (KITT) robotic automobile from the 1980s television series Knight Rider starring a 30-year-old David Hasselhoff anticipates today’s autonomous driving vehicles, voice-activated controls and artificial intelligence. The black Trans Am’s silky voice-over by William Daniels shares center stage with Hasselhoff. Others may yet predict the future, including the Bladerunner Spinner, a police car that lifts delicately off the ground to patrol a noir, 2019 Los Angeles landscape — a look 37 years into the future.

Hancock said that vehicles can be critical in defining a movie’s look and in telling its story. The Peacekeeper with its small, tilted glass windshield and body armor, some crafted meticulously from steel panels, embodies the villainous authoritarian regime of the Hunger Games. Iron Man’s Audi offers a glimpse into his love for high-priced toys. The bright yellow Bumblebee is the centerpiece of the 2018 Bumblebee  film in the Transformers franchise, which aimed for a gentler, more playful approach than its 2007 predecessor.

“People love to see cars in films,” Hancock said. “It’s the shiny keys of Hollywood. We forget how people care about Hollywood and want to touch it.”

The Peacekeeper had been sitting on the nine-acre North Hollywood lot of Cinema Vehicles, a provider of customized vehicles for the entertainment industry, when Hancock suggested the Peacekeeper to Stevens. “It fits in with dystopia in an odd, militaristic way,” Hancock said. 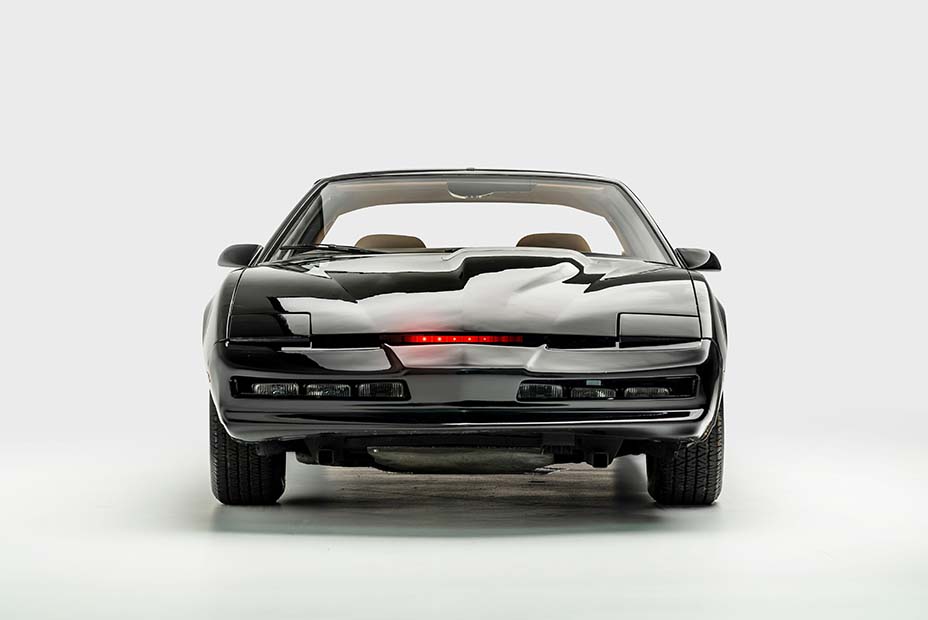 Other cars traveled longer distances. The Petersen arranged to ship a Knight Rider KITT from the Pittsburgh-area garage it calls home. Knight Rider historian Joe Huth, who acquired the car in 2007 with fellow mega-fan A.J. Palmgren, said he “kept in close touch” throughout KITT’s cross-country journey.

“The Petersen called as soon as the car had been received,” said Huth, who has written multiple books about Knight Rider, including Knight Rider: Legacy published in 2002, 18 years after the show left the air. But he added that he never hesitated to loan KITT, one of two that he and Palmgren co-own. “What an honor to have a car in the same exhibit with all these other cars,” he said.