“What a year 2017 has been for movies: there was the reboot of Beauty and the Beast, the reboot of It, the reboot of The Mummy, the reboot of Blade Runner — you guys, you’ve outdone yourselves! I don’t know how you do it, you’re geniuses,” jested James Corden while hosting the Hollywood Film Awards. The event, held Sunday at the Beverly Hilton, isn’t televised and lauds previously announced winners, some of whom are from movies that haven’t been released yet. Joked the Late Late Show host, “Like the Donald Trump pee tape, I’m just excited to know they’re out there and I might just get to see them one day.”

Corden also poked fun at himself in his opening monologue for the ceremony, celebrating the best of the film industry: “Who better to do that than me, the voice of Hi-5 from The Emoji Movie, currently available on Blu-ray with a Rotten Tomatoes score of 9 percent? It’s a match made in heaven, isn’t it?”

During the evening, Wonder Wheel‘s Kate Winslet took home acting honors, as well as an onstage kiss from the night’s supporting actress honoree Allison Janney of I, Tonya. After being introduced by her Divergent co-star Shailene Woodley, Winslet noted the amount of notable talent in the ballroom, including Janney. “I know I don’t really know you but I know I just want to be you. I do, or just stroke you or something. I mean, we could always kiss, maybe?” she said candidly. As Janney then made her way to the stage, Winslet said, “Ah, it’s gonna happen! This is an exciting moment!” (Winslet also nearly took home two trophies, since Mudbound‘s Mary J. Blige accidentally left her breakout performance statuette at the podium after receiving it from Viola Davis, and left Corden to come onstage and retrieve it.)

Jake Gyllenhaal delivered the evening’s most moving speech that paid tribute Jeff Bauman, the Boston Marathon bombing survivor he portrays in Stronger. “We’ve always had this compulsive need for heroes, the need to transform ordinary humans into superhumans, but Jeff Bauman never wanted to be a hero,” he said, after being introduced by Amy Adams. “I don’t know if I could’ve found the courage to do what Jeff did in real life, but I know something now that I didn’t know then: If we could find in ourselves the strength that Jeff found, we just might not need heroes.”

Darkest Hour director Joe Wright also took home the Hollywood Director Award, and its star Gary Oldman received the Hollywood Career Achievement Award. “I began my career almost 40 years ago, and at every juncture, some significant person or turn of fate pushed me along. I’ve had great fortune in my career and I feel every ounce of that privilege,” said Oldman onstage. “We all show up to make something grander than real life and perhaps just maybe find something of a truth in it. It’s indeed a very, very special way to earn a living.” 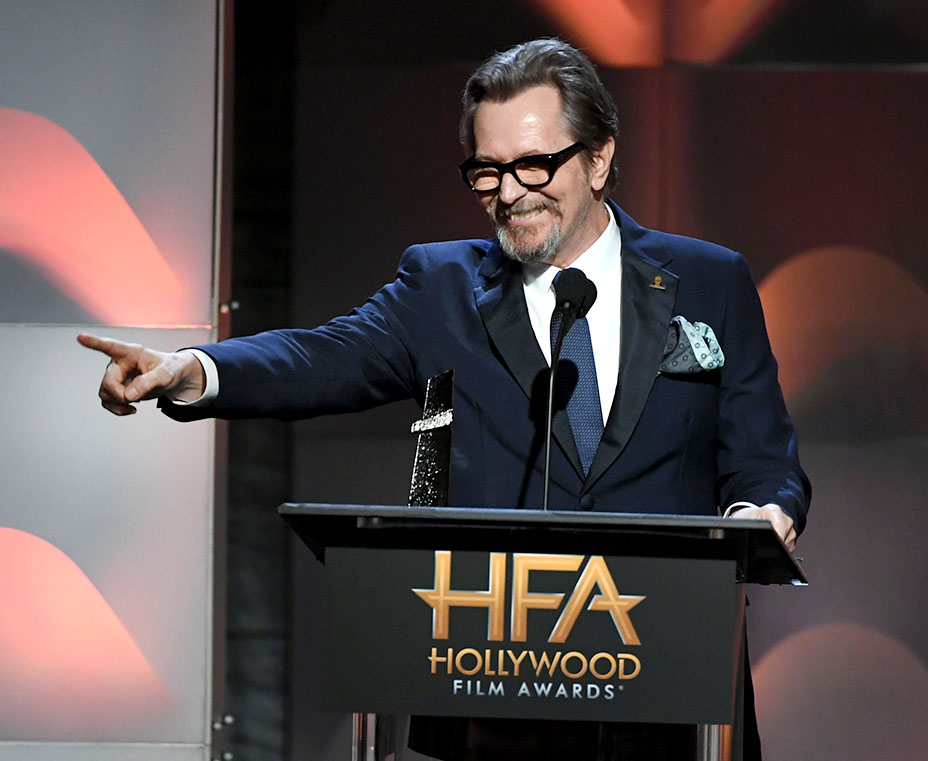 The Hollywood Film Awards, presented by Dick Clark Productions, benefited the Motion Picture & Television Fund, which supports the entertainment community in living and aging well, with dignity and purpose, and in helping each other in times of need.