It’s oddly coincidental that high and low points in Ellen DeGeneres’ career have involved puppies. In 2007, the comedian was put through the media wringer for passing on an adopted rescue dog named Iggy — who had coexistence issues with her cats — to her hairstylist. (This was a violation of the dog-adoption contract, a major no-no in the rescue community, and eventually involved lawyers, publicists and DeGeneres herself making a tearful televised plea for peace among dog lovers.)

How 'The Ellen DeGeneres Show' Said Goodbye After 19 Years

But back in 1997, when ABC was thinking of ways to reinvigorate her sitcom, Ellen, one suggestion was to cast a puppy. But DeGeneres had her own idea. “I had been on the job for about five minutes when Ellen asked to see me and said she wanted her character to come out on the show,” says then-ABC Entertainment president Jamie Tarses. “It was one of the first moves I made on the job and a big thing to propose to my bosses.” “The Puppy Episode” became the code name for the will-she-or-won’t-she? one-hour special in which Ellen Morgan (and DeGeneres herself) came out as a lesbian. Doing this brought on a media tsunami that included her being on the cover of Time, along with a ratings bonanza that even the cutest puppy couldn’t achieve.

While THR liked the episode itself (“Though the show puts comedy first, it can be quite moving”), its real enthusiasm was for the ratings: They were the highest for any ABC show that season, and the program was nearly the most watched broadcast that year. (That title went to a Seinfeld episode.) THR said 30-second ad spots sold for between $300,000 and $450,000 — three to four times the normal price. “The episode was bold and important, and I couldn’t believe how beautifully they handled it,” says Tarses. “It reinforced my faith in the power of the medium.” 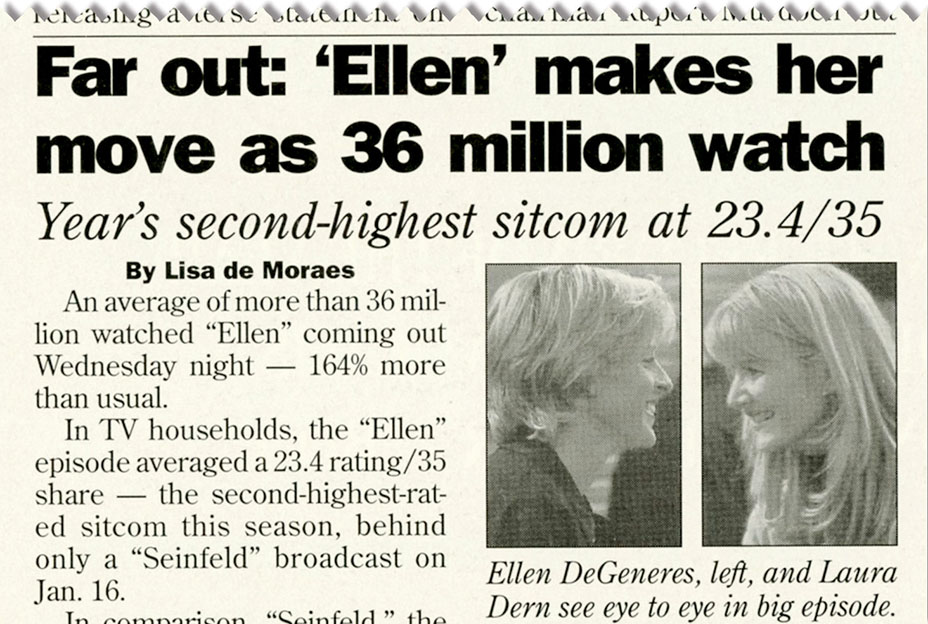